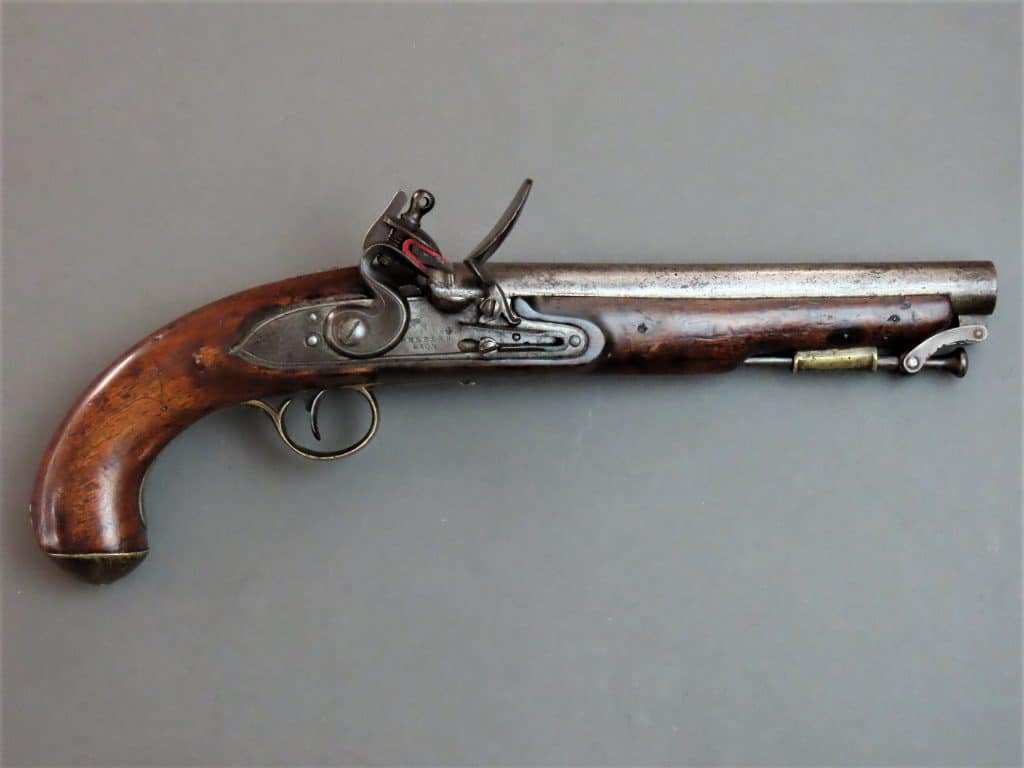 An Ordnance pistol of a type supplied to Canadian Indians to strengthen  Britain’s defence of its Canadian border in the War of 1812 with the USA. The pistol was produced under what became known as the 1813 Indian Contract in which the Board of Ordnance utilised the services of its Birmingham contractors to speedily manufacture arms for Canada.

This pistol is by Wheeler & Son who were an established Birmingham based supplier to the Board. The name is stamped on the lockplate together with the Board of Ordnance mark of government ownership consisting of a Crown over an arrow under the pan. The 16 bore (0.66 inch) 9 inch barrel is stamped with Ordnance proofs and a Crown on the  barrel tang. The pistol is mounted with a  plain brass trigger guard, butt plate and ramrod pipe, and a flat lock and swivel ramrod.

This group of pistols evolved from the trade in arms supplied by France and Britain to the indigenous peoples of North America and Canada around the area of the Great Lakes. The supply of British “trade” guns to the native population accelerated towards the end of the 17th century mainly through the Hudson’s Bay Company which secured supply contracts with independent gun makers. From 1753 the Board of Trade took responsibility for the supply of guns as trade goods. With the outbreak of war between the USA and Britain in 1812 the British realised the importance of securing assistance from Indian allies to protect the Canadian frontier from incursion by the USA. An urgent need for firearms for Canada was realised and the Board of Ordnance took responsibility for this supply from the Board of Trade from 1813 until 1816.

This pistol belongs to a small group of which only a few survive that were supplied to the Indians by the Board of Ordnance during this period. Although they resemble the trade guns previously supplied to Indians they are “Ordnance” rather than “trade” weapons produced as part of the 1813 Ordnance Contract for “Firearms for the Indians in Canada”. To fulfill this need  supply arrangements were agreed with at least 16 existing Ordnance contractors in Birmingham. The barrels show Ordnance Proofs and the locks show Inspection marks, however, many other parts, mainly due to the urgency of the need, bypassed the usual Ordnance inspections. These pistols were not of the same quality as mainstream Ordnance issue as can be seen by the early form of pan without a bridle which is unusual at this date.

By 1816 nearly 27,000 arms had been produced for this contract of which 2,636 were pistols.  The relatively small number of pistols goes some way to explain their scarcity today.  Less than half of the nominated contractors produced these pistols and production ceased a year before the end of the contract in 1815.

Provenance: This pistol is from the collection of the late Clive Brook who together with Barry Chisnall and Geoff Davies co-authored “British Ordnance Single Shot Pistols”, published by Maine Military in 2019. The pistol is featured in the text  in page 10-4 and photographed on page 10-13.  A copy of this publication is included with the sale of this pistol.