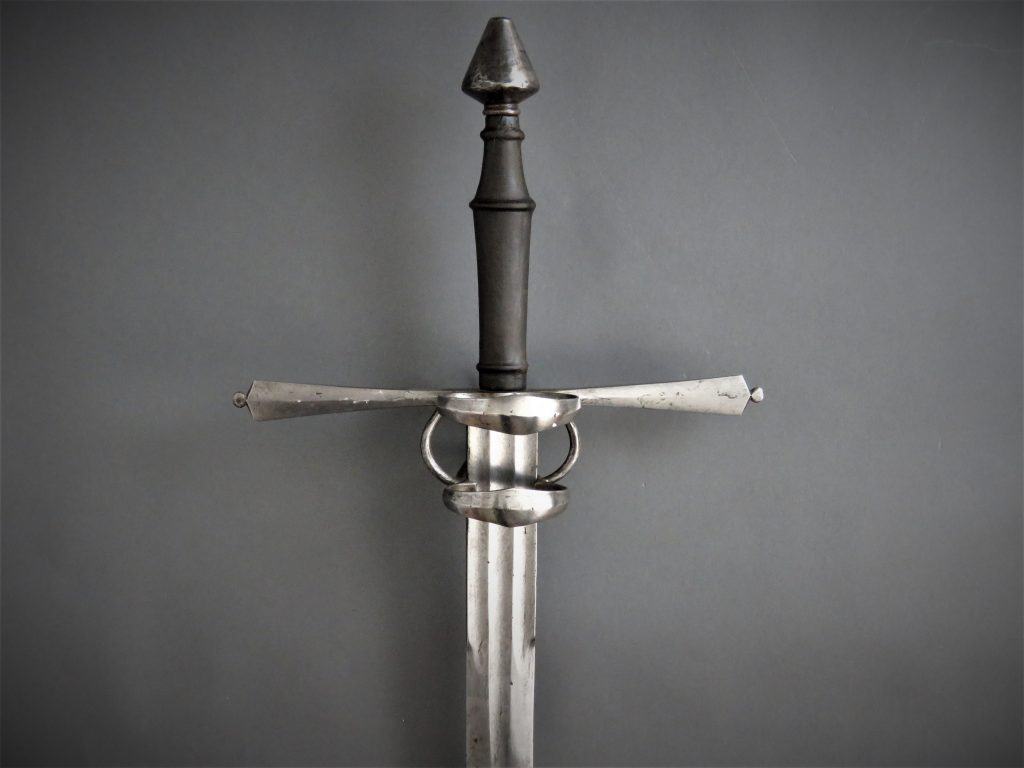 South German Or Swiss Hand And A Half Sword Circa 1560

A scarce and attractive “hand and a half” sword dating to the mid 16th century. A well made example, finely balanced in hand, well constructed and in good  condition. The distinctive hilt is similar to contemporary hilts of more common single handed swords known as “Saxon”, but most certainly made and used over a much wider region. Similar contemporary hand and a half examples of the same proportions are on display in the Doge’s Palace in Venice. Photographs of these swords in the Palace are enclosed at the end of the sequence of images of our sword posted below.

These large swords were not just for two-handed use. They were designed to be used equally well with one hand by a trained user. In the 16th century these swords were probably not a rare site on European battlefields, carried by mercenaries and professional soldiers in armies fighting almost permanently during a time of shifting religious, political and social change. As fashions changed towards the beginning of the 17th century they went out of use and today are quite rare compared to the survival rates of two-handed swords which are of the “bearing sword” variety – large, well made, imposing and decorous, but designed mainly to be carried point up in civic procession rather than for use in combat.

The hilt consists of a robust square section quillon block from which the broad arms of the cross guard are forged in flattened diamond section broadening towards the ends and terminating in shallow diamond profiles mounted with knops in the centre. A ring guard is forged from the block, and a smaller secondary ring guard sits beneath this attached to the base of two vertically aligned convex crescents of iron, which extend from the underside of the block either side of the ricasso. This structure is further strengthened on the reverse side by two crossed loops of rounded form which protrude from the block and attach to the base of the guard crescents below. A thumb ring is attached to the block above these loops. The pommel is of solid cone form with a slightly flared and narrow neck beneath. The waisted stepped grip is of wood covered with leather over a cord wrap.

The broad blade is double edged with a ricasso extending some 5.5 inches (14 cm) from the hilt. A single broad central fuller extends down the centre of the blade 9.5 inches (24 cm) flanked by two shorter fullers of similar width which extend for the length of the ricasso. Beyond the central fuller the blade is of flattened lenticular section to its tip.

Just beyond the end of the central fuller a stamped armourers mark is present both sides consisting of a face in a half moon facing to the left. This type of mark was often used by Solingen and Toledo trained smiths.  This mark particularly resembles the Toledo mark of Espadero del Rey.

The blade is most likely of Northern Italian origin manufactured by a Toledo trained smith, working in an area under Spanish control, possibly Milan, from where Spanish blades could easily access the wider European sword making markets. It is also possible that the mark is of a Spanish trained smith that went on to work in one of the non-Spanish blade-making centres such as Solingen and that the sword was made in its entirety there.

This sword form was not common in the Spanish armoury. Some European sword makers are known to have trained in Toledo, for example Heinrich Col who was a German from Solingen who worked in Toledo then in Germany (Cf. Seitz I, p. 344, and II, p. 268) indicating that movement of smiths between blade and sword making centres occurred. For more information on this mark see “European Makers of Edged Weapons, Their Marks – A Handbook for Museums and Collectors”, Staffan Kinman, Norrkopings Tryckeri, 2015.