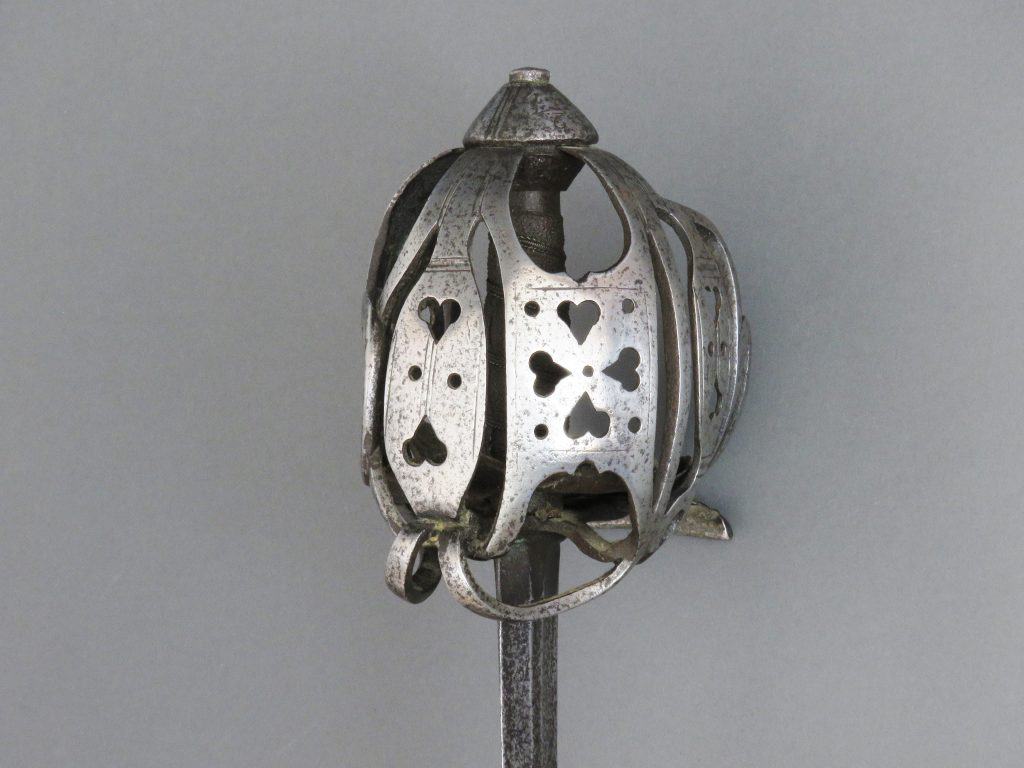 A Scottish Basket Hilted Sword for a Horseman circa 1740

A boldly constructed Scottish basket hilted sword dating to circa 1740. The hilt is of Dragoon type mounted with a Horseman’s oval ring and a French blade of a type associated with French military involvement with the Jacobite rebellions.

The basket guard is made in the traditional Scottish manner, pierced with heart and circle patterns and further decorated with incised vertical and horizontal lines. The arms of the guard are secured in a groove chiselled around the pommel just below its middle. The pommel is cone shaped and has a button on top from which three sets of triple lines radiate to its edge.

The pommel has the store keeper or unit number of 2/61 engraved upon it. The hilt is mounted with a broad scrolled wrist guard which is forged from the rear quillon. The grip is made from a baluster shaped spirally grooved wooden core, covered with shagreen and bound with now blackened twisted silver wire, and has iron ferrules mounted top and bottom. The hilt also retains its original leather liner, now detached at the base.

The sword is mounted with a French blade of excellent quality forged in  hollow ground tapering diamond section, with a flattened spine running down the centre to the tip on each side. On one side near the hilt, a panel inset amongst incised scrolls and foliage, contains the French phrase “VIVE LE ROY” (long live the king) running down the blade in large letters. On the other is an armorial with French fleur de lys depicted amongst scrolls, lattices and foliage. An eight pointed star is depicted below this with the word “Cavalier” beneath.  The blade has a short ricasso above which on both sides is the name “Solingen” indicating that the blade was made in this German blade making centre on order from France, probably as a batch, and made in the French taste. Given that the word “Cavalier” in French means “Horseman”, this, combined with the relatively long length and weight of the blade, clearly indicates that it was made for a Dragoon or similar mounted soldier and was mounted onto a Scottish “Horseman’s” hilt.

The sword may have been owned by a Scot with associations with France, or even one in French military service. Historically there has been a long relationship between Scotland and France. By the mid-18th century many of the Scottish gentry had followed family traditions and served as mercenaries with the French army, disregarding whether France was at war with England at the time, for hundreds of years. A French regiment served at Culloden on the side of the Prince Charles and recently it has been postulated that as many as one in ten of the Prince’s troops at Culloden may have been French or Scots in French service.

The most prestigious honour for a Scot in French service was to be selected to become a member of one of the French King’s elite Scots Guard Regiments. During the 18th century after the failure of the Jacobite rebellions, many fugitive Scots found a home in the French army fighting for the French crown. Hence these associations represented in a sword would not be unusual at the time and the French connection may also  indicate Jacobite and Catholic leanings of its owner.

Stephen Wood in his book “The Auld Alliance – Scotland and France: The Military Connection, Mainstream Publishing 1989, chronicles the history of Scots in military service with the French.