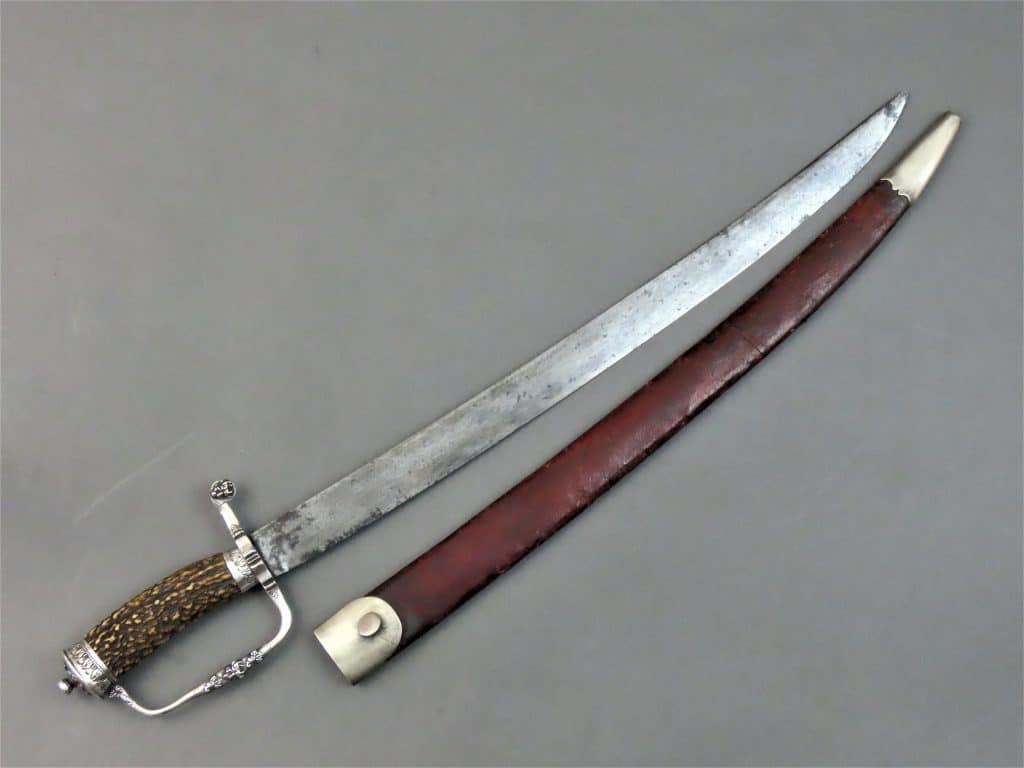 In the 17th and 18th centuries when swords were a popular weapon for gentlemen, hangers were a robust secondary side arm used for self-defence when hunting and travelling. They were also used in parts of the British Army and Navy. Hangers appear in some military portraits of the time. The fine quality hanger described here was a gentleman’s weapon.

The maker is almost certainly Francis Springall. The knuckle bow is stamped with his pre-Britannia Standard mark of “F S” in raised relief inside a lozenge. The mark is worn but discernible. His mark has been identified on another silver hilted hanger which is in the Royal Armouries collection (Ref: IX.1803) and dates to around the same time.

Francis Springall was one of a number of London-based silver hilted sword and hanger makers that excelled in their craft in the late 17th century. He is recorded from 1686 to 1735. He started his apprenticeship in 1686 and was sworn free upon completion in 1694. As the Britannia Standard would require his name stamp to read “S P” from 1697, the hanger can be dated to the small window of  three years between 1694 and 1697. Springall lived for most of his life at “Three Legg’d Alley”, New Street Precinct in the  Parish of St Bride’s. He was buried at St Bride’s Church, Fleet Street, in 1735.

Springall lived in exciting times as London was remodelled after the turbulence of the Civil War period, plague and the Great Fire of 1666. The city was more outward looking, international trade was growing through London port, military success was being achieved abroad and more interest and investment was being expressed in art and culture. The quality of Springall’s work, like that of his leading contemporaries, represents the evolving style and fashions of late 17th and early 18th century Baroque London.

The hilt of this hanger is comprised of a bold faceted quillon block from which a  downward facing rear quillon and a knuckle bow emerge. The pommel is formed as a cap on top of the natural stag horn grip. The top of the knuckle bow is fashioned as a hook which secures the bow into the pommel. The flattened quillon terminal features in bold relief a mounted caped horse rider on each side, possibly a representation of a huntsman.  The feature is repeated in a diamond shaped panel in the middle of the knuckle bow on each side with floral sprays above and below. The maker’s stamp is struck just above one of these panels. The knuckle bow terminal is decorated with a floral design which is also applied to the quillon block. The shank of the pommel cap is decorated with a complex pattern of closely aligned crescents and arches between a rim above and below. The same pattern is present on the base ferrule of the grip. The pommel top has a pronounced ribbed button around which a circular panel has been formed containing in raised relief a crown above and below the button and the bust of a man on each side, the symbolism of which is unknown. The decoration in raised relief is highlighted by contrast with a stippled background.

The curved single edged blade is 18.75 inches long (just under 48 cm). The worn remains of the blade maker’s mark is present on one side. The hanger retains its original wooden scabbard with its red leather covering. The mounts are replacements and not original to the scabbard.