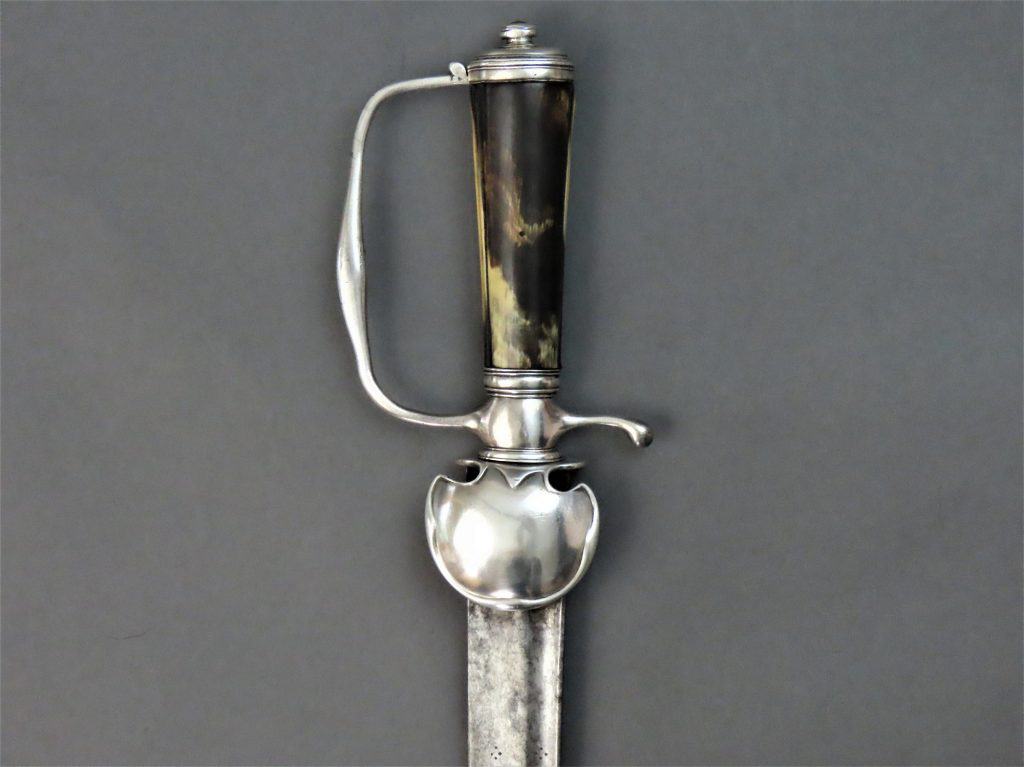 An English Silver Hilted Hunting Hanger with London Hallmarks for the year 1740 / 1741, made by the silver smith and cutler, John Carman (I) of The City of London.

This plain but elegant hanger was a gentleman’s weapon. The most distinctive feature of the hilt is the large convex scallop-shaped shell guard with its moulded edge which emanates from the cross guard at the front and extends parallel to the blade towards its point. The knuckle bow is clearly marked midway along one side with incuse stamps for the date, the royal lion passant, the crowned leopard’s head assay mark and the makers mark of “J C”.  The leopard’s head and lion stamps are repeated underneath the hilt. This maker’s mark is most certainly that of the London cutler and silver hilted sword maker John Carman (I). The top of the knuckle bow is secured into the pommel cap with a terminal hook of usual form. The pommel cap has an integral ribbed button on top and is grooved at the side in similar style to the base ferrule of the grip. The attractive grip is formed from four plates of natural horn.

The curved, single edged blade broadens slightly at the tip and is 25 inches (63.5 cm) long. It has a short ricasso and a single fuller which extends from the hilt underneath the spine of the blade and terminates almost at the tip. The blade on each side is marked with the talismanic date 1555. The  numbers are separated in the middle by an orb mark with a cross attached either side. The word “S A H A G V M” appears inside the fuller on each side. This mark appears with variants on a number of blades in the 17th and 18th centuries mounted on Dutch and English swords and were probably made in Solingen.

During the 17th and 18th centuries, when swords were a popular weapon for gentlemen, hunting swords and hangers were a robust, shorter, secondary side arm used for self defence when walking about town and travelling in general. Although referred to as “hunting” weapons, they probably had minimal use in hunting. Self defence in crowded areas, and in the tight confines of dangerous alleyways in cities, required a weapon which was shorter than a full length sword for close-in use in these confined spaces. The blade of this weapon is a fighting blade which would probably have been impractical to use in a hunting environment and further outlines the misnomer of the term “hunting” when  generally applied to these swords.

The date of this hanger shows that John Carman (I) made it shortly before his death in 1741. Unfortunately the signature mark is no longer available to us in the records at Goldsmiths’ Hall. The Smallworkers’ Book of 1739 – 1757 which might have recorded this mark, plus many others struck between these dates, is now lost. John Carman (I) had a son who was also a silver hilted sword maker and cutler.  He is recorded from 1721 when he was born until 1664 when he died. He was indentured to his father, and sworn free by servitude of the Cutlers’ Company in 1743. It is likely that he registered a mark then, or shortly after, possibly prompted by the death of his father and the resulting need for stability in the business.  Given these circumstances John Carman (II) could not have had his own name mark registered at Goldsmiths’ Hall and be making swords in his own right before 1743. Hence the mark is of Carman (I) given the absence of any other recorded makers with names that may have marked in this manner at this date.