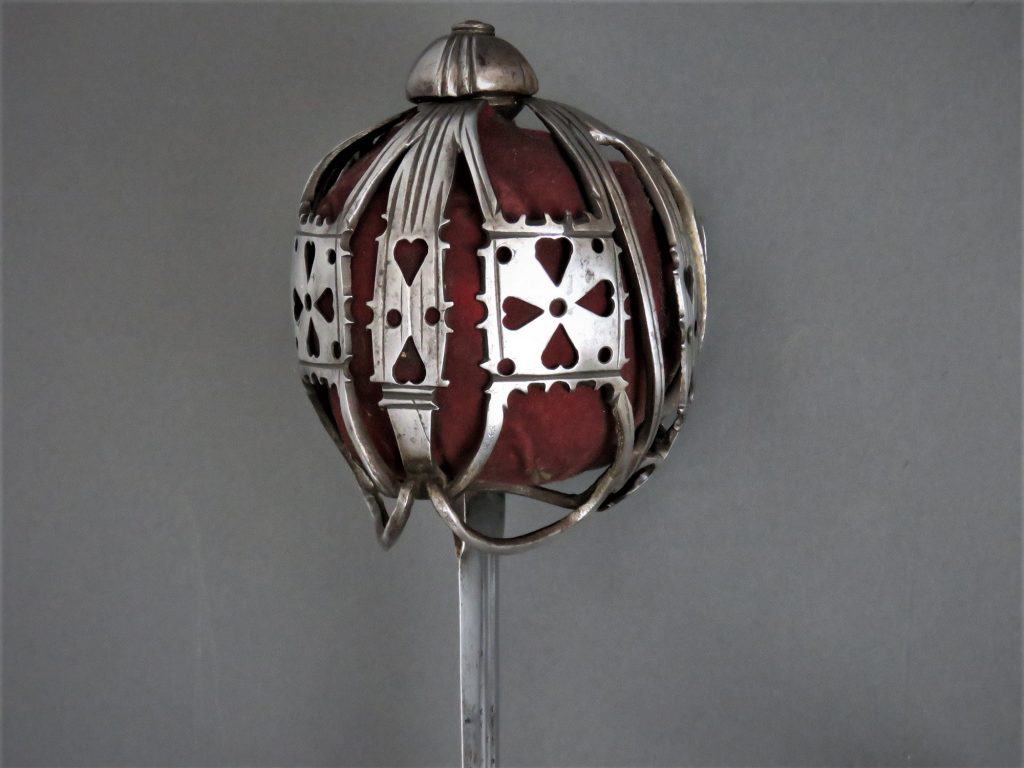 An attractive Scottish basket hilted sword of traditional design and manufacture dating to the late 17th or early 18th century. Historically this period in Scotland is marked by the failed Jacobite Rebellion of 1715. The sword is mounted with a fine quality “ANDRIA FARARA” marked double edged blade and is nicely proportioned and well balanced.

The basket guard is composed of finely forged and sturdy structural bars of thick square and oblong section. The achievement of such an elegant hilt profile by working with iron of such thickness is much more difficult compared to the manufacture of less robust hilts. The decoration is precise and well executed. In this respect a superficial examination of the sword disguises the skill of the sword maker who was clearly an accomplished armourer.

Two primary square guard panels are attached at the front of the hilt by saltire bars. These are pierced with heart shapes with the points directed to an eyelet in the centre. The corners of each plate are also pierced with similar circular apertures. The outside edges of the plates are finely fretted with merlons. The secondary guard plates consist of a front knuckle bow plate and side guard plates. The side plates are forged with thickly formed merlons at the base which add strength to the structure. All three of the secondary panels are pierced with hearts and circles and fretted at the edges in similar form to the main guard plates. All of the guard plates are decorated with incised lines and the main guard bars are cut with a decorative groove along the middle.

The three structural bars of the guard are curved upwards the tops of which  slot into a groove cut around the dome-shaped pommel just below its middle. On top the pommel is decorated with four equally spaced sets of aligned triple grooves which radiate from the flat pommel button. The hilt was not made with a scrolled wrist guard. The rear quillon terminal is rounded off into a knop and decorated with lines underneath. This dates the guard to an earlier period of evolution of the  Scottish basket hilt compared to later 18th century examples which are generally mounted with scrolled wrist guards.

The decoration of longitudinal lines applied along the middle of the structural bars is reminiscent of the style developed by sword makers working in Glasgow in the late 17th century which in its fully developed form became known as the “Glasgow” style. The early manifestations of this style are  present in two swords which are similar to ours made by the first John Simpson of Glasgow housed in the Kelvingrove Museum Collection in Glasgow, and may be seen in Cyril Mazansky’s “British Basket-Hilted Swords”, Boydell Press 2005, page 102 and 109.

The grip is of wood, spirally grooved and covered with shagreen bound with a strip of thin silver ribbon. The hilt retains its original leather liner covered with red cloth bound with the remains of blue ribbon at the hem.

The tapering blade is of the highest quality. It has a short ricasso, the shoulders of which are accommodated by a groove chiseled into the underside of the cross guard in the Scottish manner. From the ricasso three fullers run down the centre of the blade, the middle fuller terminating 6 inches (15 cm) from the blade tip, and those either aside terminate a short distance before. Near to the hilt on each side the middle fuller is stamped with a series of “O” and “X” marks with the fullers above and below marked “ANDRIA FARARA” flanked by “X” marks. The blade was most likely made in Solingen which was the main blade making centre in Europe at the time. Blades marked in this manner were particularly valued by Scottish Highlanders.

Condition: Overall the sword is in good condition. A few minor areas of note relate to the leather liner which is now distorted with age, crispy and fragile. The blade has a few minor shallow stained patches of light rust. There is a small chip to the top of one of the main guard plates at the front.