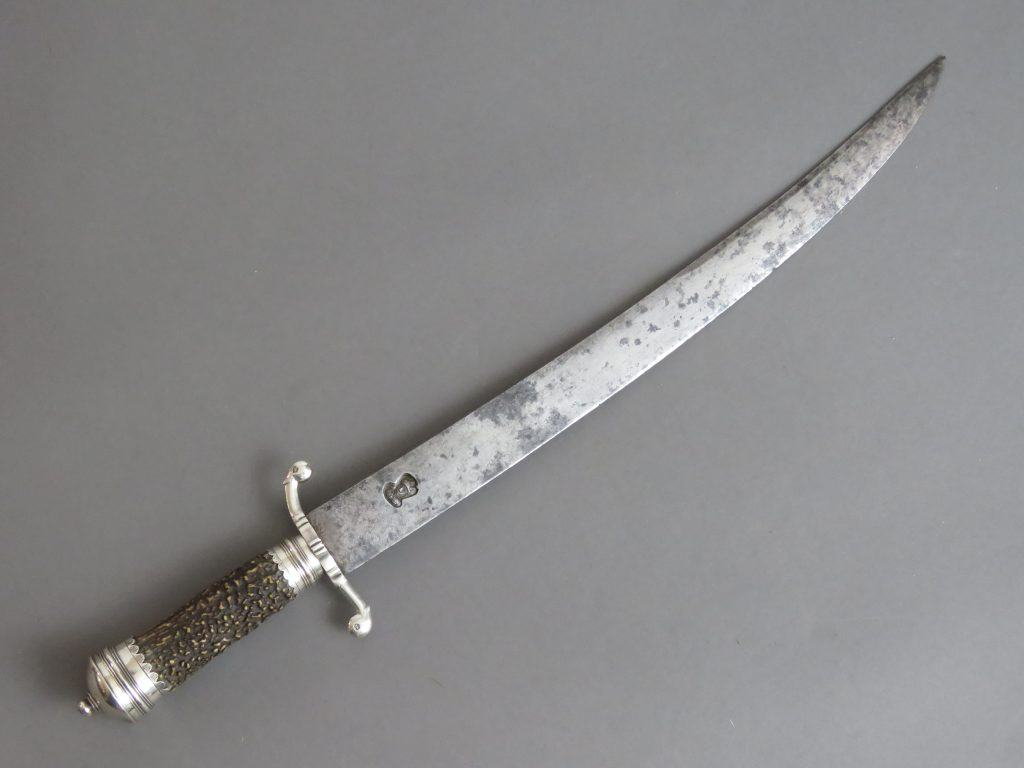 An English silver mounted hanger with the maker’s mark “WL”. This is a fine example in unusually good condition.  The small mark consists of the letters in raised relief inside a shield with a pellet above and below. So far the mark cannot be attributed to any presently recorded silver hilted sword maker. The nearest candidate is William Lukin recorded as working in London from 1692 to 1755.

If this is the maker then the mark, and the hanger, most likely date to before 1697 which is the date of the advent of the Higher, or “Britannia”, Standard for silver, when smiths were required to record a new punch mark bearing the first two initials of their surnames. When the requirements for punch marks changed again in the 18th century makers reverted to recording their initials but in bolder type accompanied by date and hallmark stamps. On this hilt the quillon terminals are stamped as are the base ferrule to the grip and the pommel. This comprehensive marking was also a historic practice by the turn of the century.

The cross guard of this sword is comprised of a bold faceted block with horizontal quillons swollen at the vertically counter curved terminals. The grip is of stag antler with a plain ribbed ferrule at its base and scalloped edge. The pommel cap has a ribbed neck beneath with scalloped edge formed in the same manner as the basal ferrule. The plain dome formed on top has a pronounced tang button in the centre.

The slightly curved robust single edged blade is just over 16 inches long (40.5 cm).  It becomes double edged from just over two thirds of the way along to the tip. The blade is deeply struck on both sides at the forte with a moustachioed King’s head mark on each side.