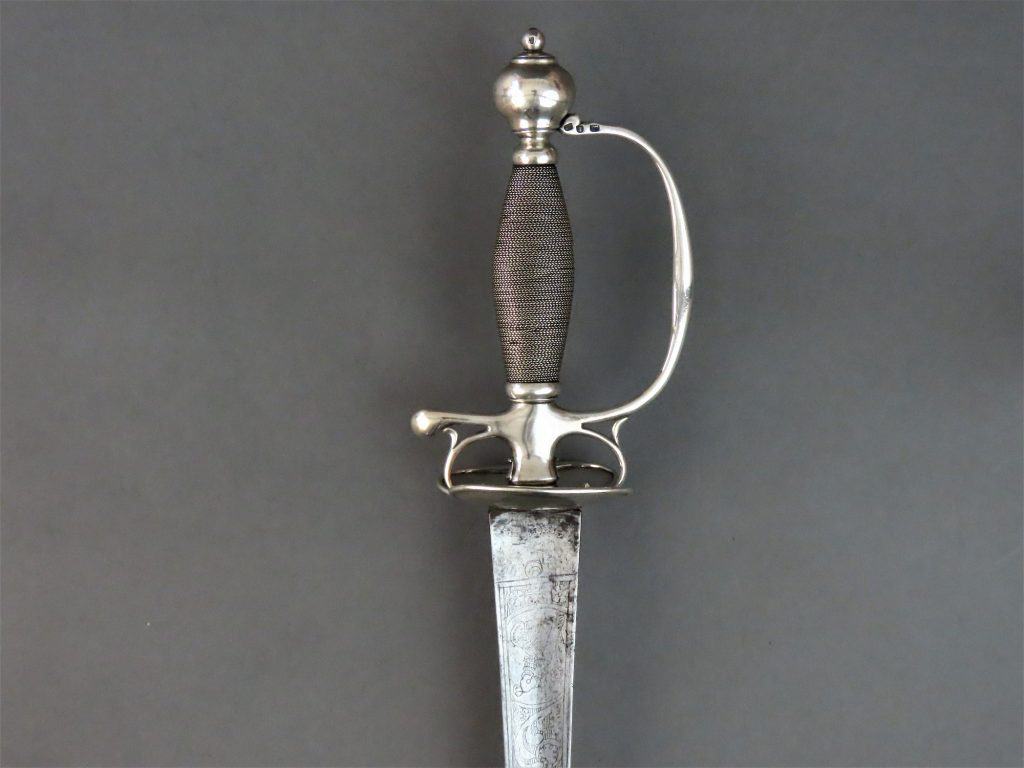 A fine early 18th century English silver hilted small sword mounted with a double shell guard. The hilt is of the early plain form that arrived in the late 17th century and is the precursor to the period when the quality of small sword design and decorative appearance blossomed and reached its hiatus in London from the 1730’s onwards.

An interesting feature of the hilt is the two outwardly concave bars which link the pas d’ane rings to the knuckle bow and rear quillon presumably to strengthen the structure in an attractive manner. The ring terminals also protrude upwards. These features are unusual on English silver hilted small swords but appear on one of the swords featured in Leslie Southwick’s “London Silver-hilted Swords”, Royal Armouries, 2001, page 279, plate 29. This sword is in the Royal Armouries Collection, Ref IX.2241. It is by the maker George Willcocks and hallmarked for 1720 / 1721. The hilt is almost identical to our sword even down to the minor details such as the shape of the pommel button and the grip ferrules. The maker’s mark is also shown in the same place on the pommel button.

Whilst the subtle features described above are unusual in English made swords they are not unusual in 18th century American small swords. Daniel D Hartzler in “American Silver-Hilted, Revolutionary and Early Federal Swords”, 2015, Volume 1, illustrates a number of swords with these features made by 18th century American silversmiths such as Edward Winslow (pages 222, 223), William Little (pages 249 to 251) of Massachusetts and working in the early 18th century contemporary with the maker of our sword. Hartzler describes the hilt features highlighted above as the “American manner of construction” (page 222). Our sword was presumably therefore made in the American manner most likely for an American gentleman by one of a number of London silversmiths that catered for this demand.  Most American silver hilted small swords at this time, like our sword, are rather plain double shell guard types as can also be seen in Hartzler.

The hilt of our sword is almost certainly by Thomas Bass. Three hallmarks marks are present on the knuckle bow and two on the pommel button. The knucklebow marks are the lion passant and the crowned leopard’s head assay mark plus the date stamp for 1726 / 1727. The pommel button has a worn lion passant on one side and the maker’s mark on the other which is also worn and indistinctly stamped onto this awkward surface.

Thomas Bass’s Sterling mark was registered in 1720 (Grimwade 2685) and consisted of his initials “T B” in raised relief inside a shield with a pellet between, and below, and a crown above. The mark on the sword pommel clearly shows the “T” plus the pellet to its right and the spine of the letter “B” to its right. Due to the tight curve of the small button most of the right hand part of the stamp is missing.

A feature of the lives of London silver hilted sword makers of the 18th century was that talent in working with silver was not necessarily a guarantee of commercial success. To succeed they also needed business acumen. Some silversmiths were very successful and became wealthy men. However, the records show that many talented silversmiths, evidenced by the quality of their surviving works, lived a sparse existence and sometimes ended their lives in penury. Thomas Bass seems to have been one such unfortunate case.

Thomas is recorded from 1701 to 1760 as a silver hilt maker and sword cutler. He was indentured to the profession by the cutler Joseph Reason for seven years and sworn “free” of the Cutlers’ Company on 15th April 1708, after which he is recorded as working in Fetter Lane in the City of London where he remained for the next 50 years and registered his first mark. He indentured his one known apprentice, Isaac Stewart, in 1712, and registered his second (Sterling) mark in 1720. On 5th October 1721 the Court of Assistants of the Cutlers’ Company excused Thomas from taking livery due to his “mean” circumstances. A year later he was excused again:

“Thomas Bass being sumon’d did not appear but several Members knowing him to be poor the Court doth think fit to excuse him till he is in better Circumstances”. It seems that Thomas struggled with poverty all his life and spent his last years in a workhouse to be buried at St Andrew’s Church, Holborn, on 22nd February 1760. The above reference work borrows from Leslie Southwick 2001.

The hollow ground, triangular section blade displays a pronounced taper at the forte and is in fine condition with a grey uncleaned patina. Engraved scroll designs have been applied near to the hilt in panels on both sides. The widest shows a  hatted figure surrounded by foliage. Minor speckles and patches of age staining are present in places.  The blade length is 30.5 inches (77.5 cm) and the overall length of the sword is just over 37 inches (just over 94 cm).