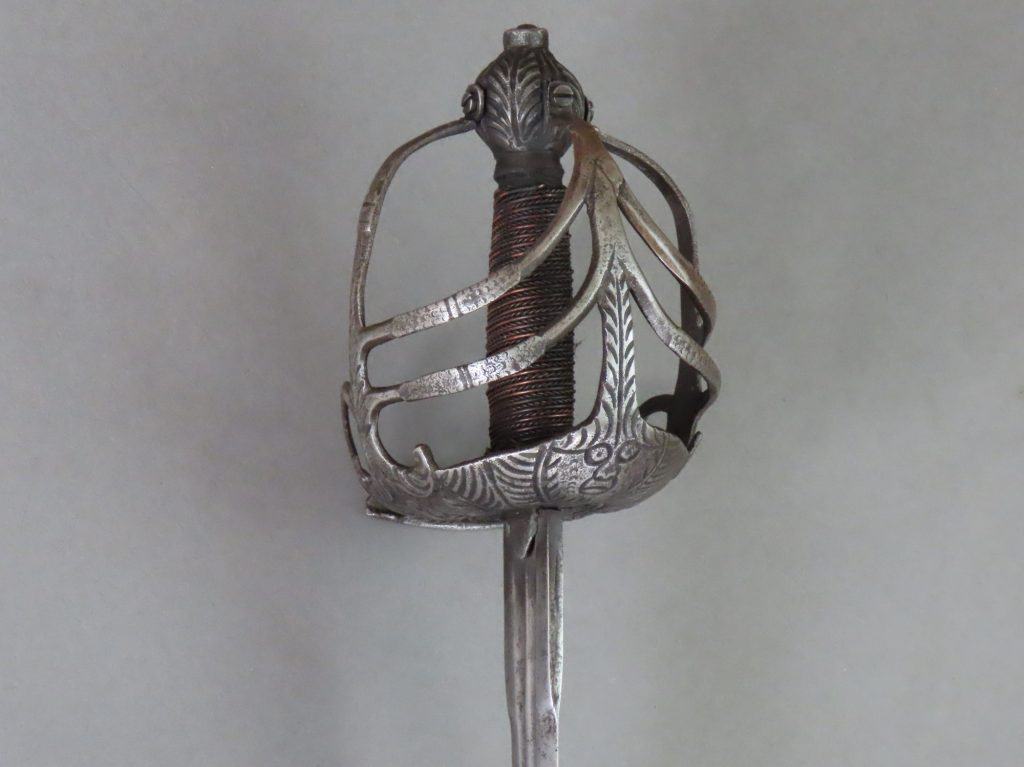 An English “Mortuary” hilted sword dating to the middle part of the 17th century. This style of sword is a symbol of the English Civil War and Protectorate periods.

The hilt is of typical form consisting of a broad saucer-shaped guard plate from which three main guard bars extend upwards in curves with the flattened angled terminals screwed into the pommel. Two downward facing bars emanate from each side of the knuckle bow towards its top and join the base of each side guard bar to add strength to the structure. On the opposite side of the side bars another curved bar emanates and joins the dish near its curled wrist guard which is fashioned from the rear of the plate.

The guard plate is covered with chiselled decoration. A segmented panel with a dot in each shape surrounds the tang aperture in the middle. This is surrounded by four “Green Man” faces with wild staring eyes separated by ferns instead of the more usual sedate busts that often adorn these sword hilts.  The guard bars and pommel are decorated with chiselled fern-like shapes.   The pommel is globular in shape and has an integral button and a pronounced flared neck.

In history the Green Man appeared in traditional springtime rural village pagan fetes and ceremonies as a symbol of growth and fertility for the coming farming season.  The figure, dressed in green garlands was exhibited then sacrificed by ritual decapitation, hence the appearance of the head separated from the body amongst foliage. The practice was so embedded in rural communities that it survived into the Christian era and appears in the architecture of many early churches. In the 17th and early 18th centuries it appears on some English sword hilts and blades. Imbued with the ideal of “renewal” the Green Man may have been thought to embody some form of spiritual protection then later became more of a “good luck” charm as it is probably intended on this sword blade.

The wooden grip is wrapped with copper wire in twisted and straight lengths. The grip base sits on an iron flanged plug mounted onto the inside of the guard plate from which two langets extend through the tang aperture to flank the blade either side for a short distance from the hilt.

The double-edged blade has a pronounced ricasso and two central fullers which run in parallel from the hilt almost to the tip. The fullers contain punched letters, numbers and small orb and  cross marks. The blade is probably of Solingen manufacture.  Blades were imported into England in huge quantities from European blade making centres to satisfy the demand for swords on both sides during the Civil War.  the The blade is 29.5 inches long (75 cm) and overall the sword measures 35.25 inches (89.5 cm) long.

Condition: The hilt has a repair to the top of the knuckle bow where the top portion of an inch or so has been replaced. One of the upper crescent guard bars which emanates from the knuckle bow has been replaced or re-attached. Evidently the sword sustained some damage during its working life. The repairs are hammer forged and pinned rather than welded indicating the repairs are “working life”.