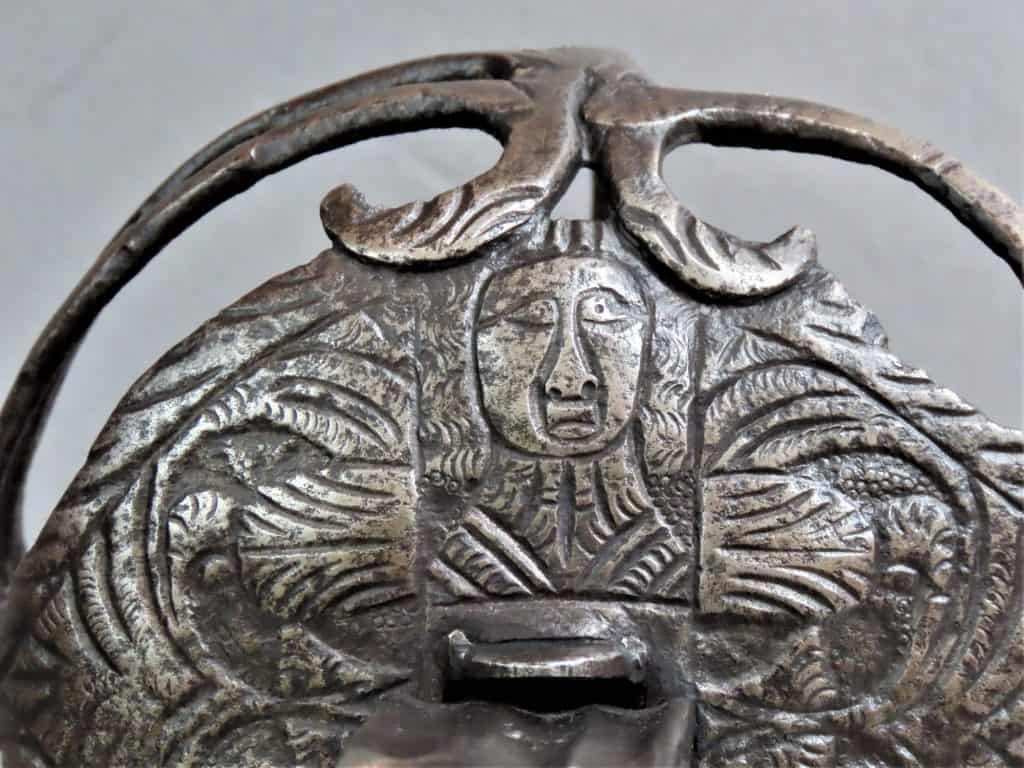 An English “Mortuary” hilted sword dating to the middle part of the 17th century and the English Civil War and Protectorate periods.

The hilt is of typical form consisting of a broad saucer-shaped guard plate from which three main curved tapering guard bars extend upwards with their flattened angled terminals screwed into the pommel. Two curved downward facing bars emanate from each side of the knuckle bow towards its middle and join the lower half of each side guard bar to strengthen the structure. On the opposite side of the side guard bars further curved bars emanate and join the dish near its curled wrist guard which is fashioned from the rear of the plate. The bases of the side guard bars are formed as merlons.

The guard plate is covered with chiselled and pierced decoration to the outside in typically English manner for this period.  It consists of four panels, one on each side of the blade, which contain the flowing haired figure of a man. Above and below two larger panels consist of feathered sprays.

These chiselled designs are finely and deeply applied giving a high visibility to the salient features. The designs are almost identical to those on a sword  illustrated on page 217 of Stuart C Mowbray’s “British Military Swords”, Mowbray Publishing, 2013, in a section dedicated to Mortuary Swords, which is in the York Castle Museum Collection. The similarities between the engraved patterns to the hilts of these swords, combined with the similarities between other patterns of chiselled design on other swords, indicates  variations and the existence of sub-groups within the overall relatively homogeneous “Mortuary” group. These were most likely the  signature designs of different makers and workshops, now unknown.

The guard bars and pommel are decorated with chiselled lines in a fern-like manner.  The pommel is globular in shape and has an integral button and a pronounced flared neck and is also chiselled with fern-like foliage.

The wooden grip is wrapped and bound with different twists of roped copper wire. It sits on an iron flanged plug mounted onto the inside of the guard plate from which two langets extend through the tang aperture to flank the blade underneath on either side for a short distance from the hilt.

The single-edged tapering blade is of high quality and of German, probably Solingen, origin. German blades were imported into England in large quantities to fuel the demand for swords on both sides during the Civil War. It has a ricasso with a deeply fullered blunt edge extending for 2 inches (5 cm) from the hilt. A further fuller extends from the hilt under the blunt spine until it ends a distance of 7 inches (18 cm) from the tip from where the blade is double edged.  Another fuller extends from the blade running underneath the last almost to the blade tip. The two major fullers are clearly marked with WEIRS  BERGH on one side and WEILM   TESSCHE on the other with the two words being separated by “Running Wolf” marks. These marks are probably the marks of the blade makers now unknown. Various dots and an armourers mark near the hilt on both sides adds to the interesting nature of the blade. The blade is 31.5 inches long (80 cm) and overall the sword measures 37.25  inches (94.5 cm) long.