Following the Restoration of the monarchy in England in 1660 blunderbusses increased in popularity in civilian life and in the Services, particularly in the Navy, and in other mercantile operations. Blunderbusses were popular with commercial entities that needed protection from robbery such as coaching companies. In the domestic area blunderbusses were often found conveniently placed in houses to face intruders if the owners felt threatened.  This blunderbuss was made by Joseph Stace, an influential and important gunmaker, who together with a group of other London gunmakers made their mark as they emerged from the austere Civil War and Commonwealth eras into a more liberal environment after the Restoration, and continued the development of gunmaking in London to a common style and high standard. 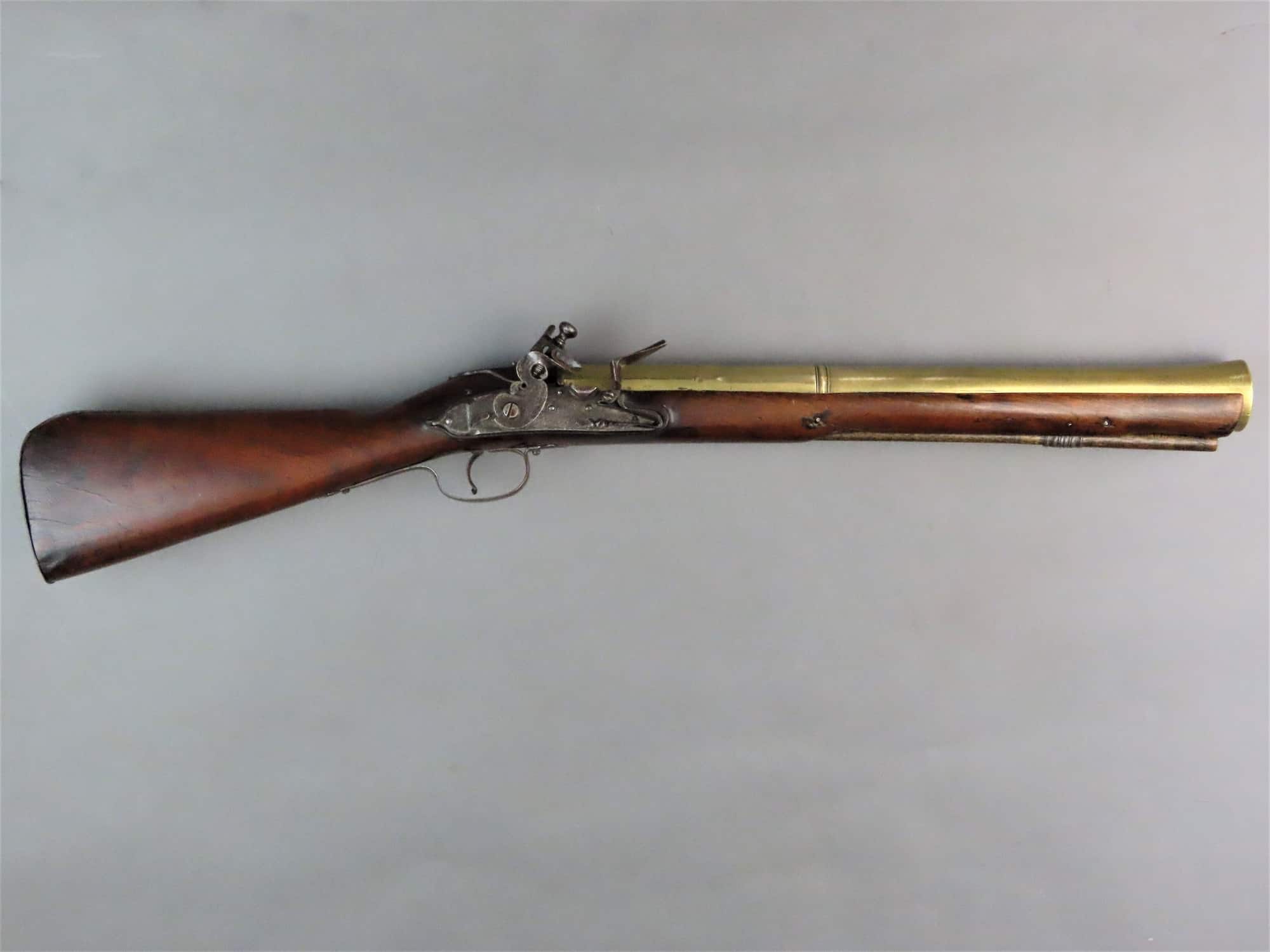 Joseph Stace was apprenticed to William Watson in London in 1643 and made free of the Blacksmiths Company in 1652, and free of the Gunmakers Company in 1656, in which he was elected Assistant in 1664, and Master in 1675. Stace based himself in the Minories in London. He is recorded as a Contractor to Ordnance from 1662 to 1690 and to the Hudson Bay Company from 1674 to 1690 and to whom in one surviving record is shown providing 76 guns and 6,000 gunflints in 1674. It seems that Stace did not enjoy a retirement in that his death is recorded in 1690. 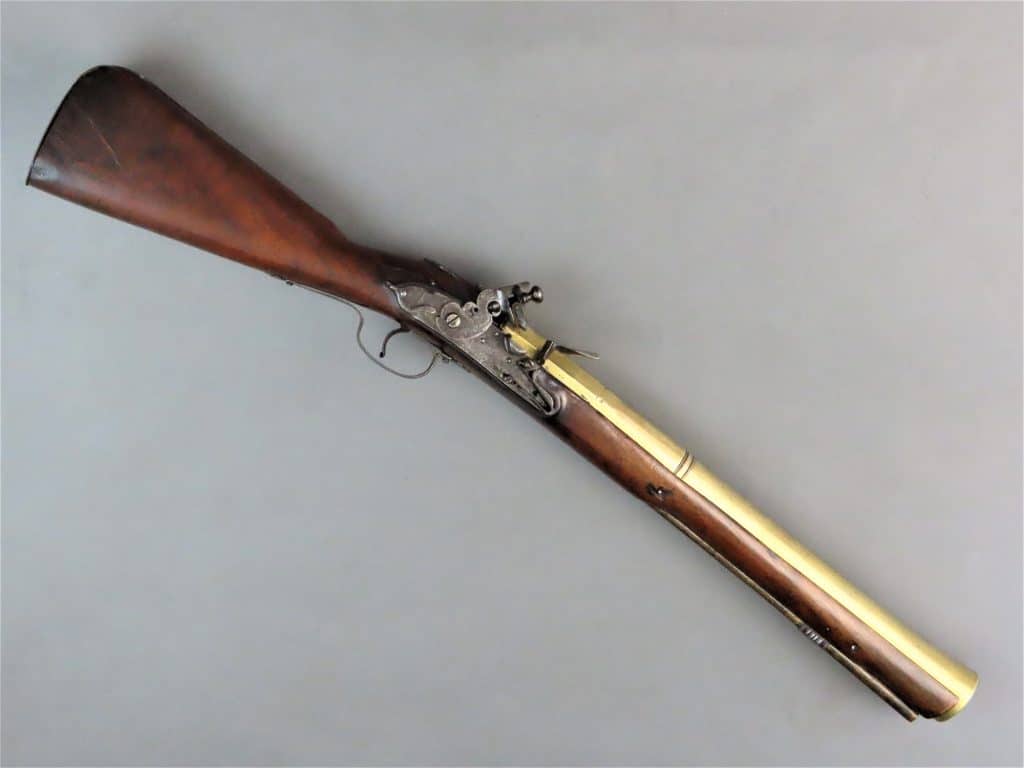 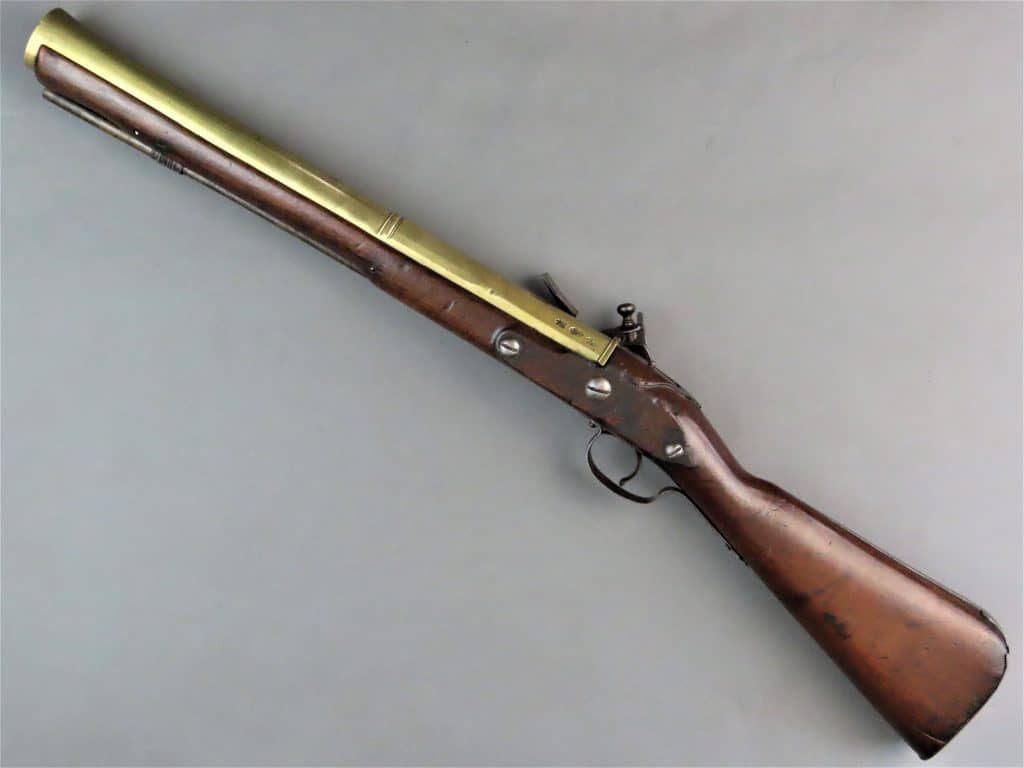 The blunderbuss is mounted with a heavy flared brass barrel of octagonal section at the breech stamped on the off-side flat with the mark of Joseph Stace as the barrel maker, a fleur-de-lys with the initials “I S” beneath (1). Beneath this the Proof Mark and View Mark of the London Gun Company , both under a crown, are struck. On the top flat the owner’s mark of J. NOLLER is struck which may represent a business as well as an individual. The barrel has a raised flange at the breech grooved with a sighting notch and is fixed with an iron tang through which the end of a screw which enters the stock near the trigger beneath secures the barrel assembly. Beyond this flange the barrel is of octagonal section for a few inches, then becomes 16 sided for a few more, the two sections separated by dimples. After the flat sections reach a raised crescent with lines either side the barrel is of rounded section widening towards the muzzle. 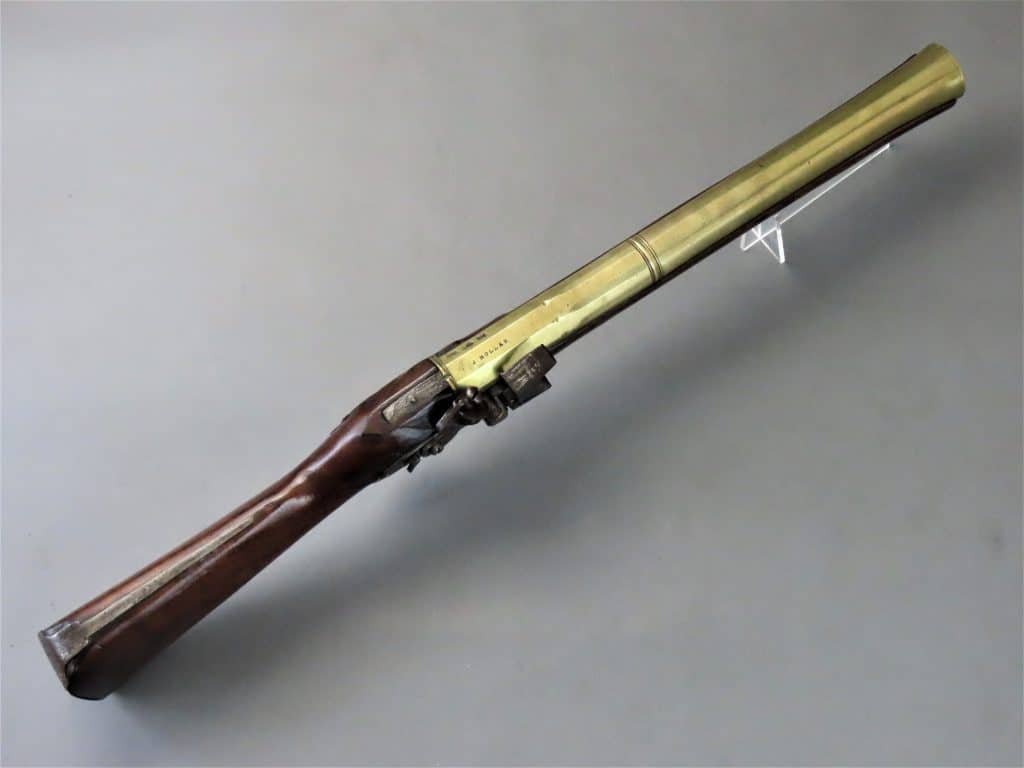 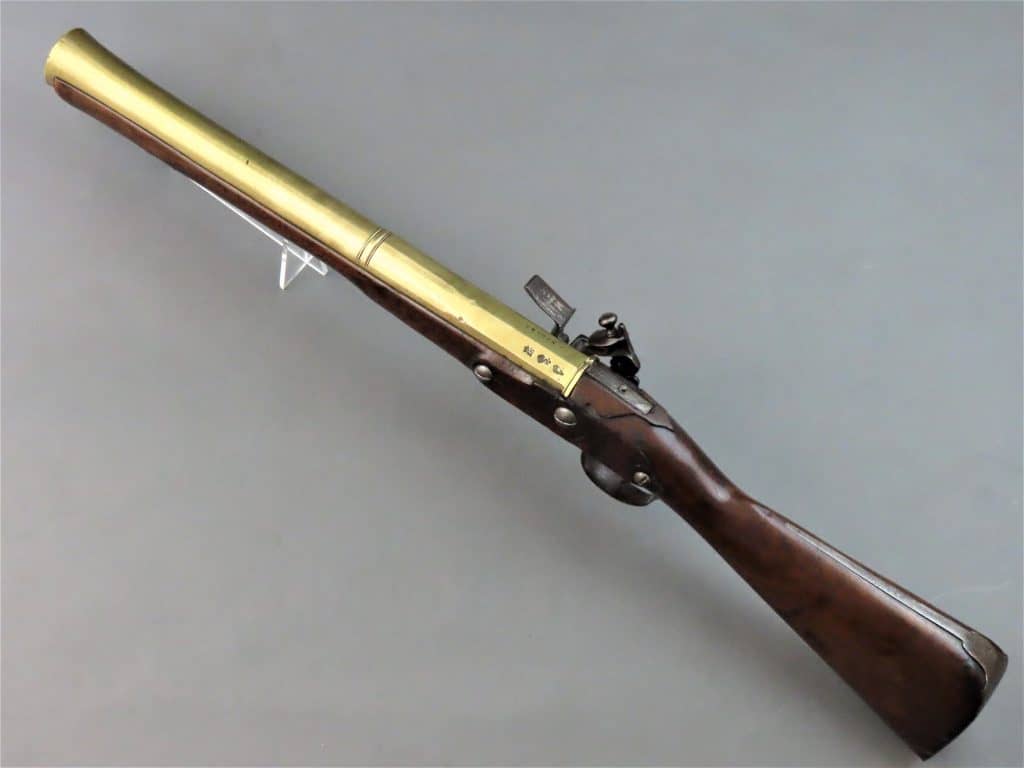 The flat lock has a stepped and engraved nippled plate and sits in its moulded wooden surround retained by three screws, the heads of which are visible on the opposite side of the stock. The flat cock is pierced and engraved with foliage as is the dog catch and the area of the lock plate beneath the triangular shaped pan, further enhanced by a serpent’s head with an arrow shaped tongue protruding from its mouth. This was a common decorative feature used by Stace and other gunmakers of the time. The maker’s mark of JOS STACE is stamped beneath. The lock is of “English” of later form in that the dog catch which holds the cock in the half cock position is reduced compared to its predecessors. This type is often referred to as a Type 2 lock with a “vestigial” dog catch. 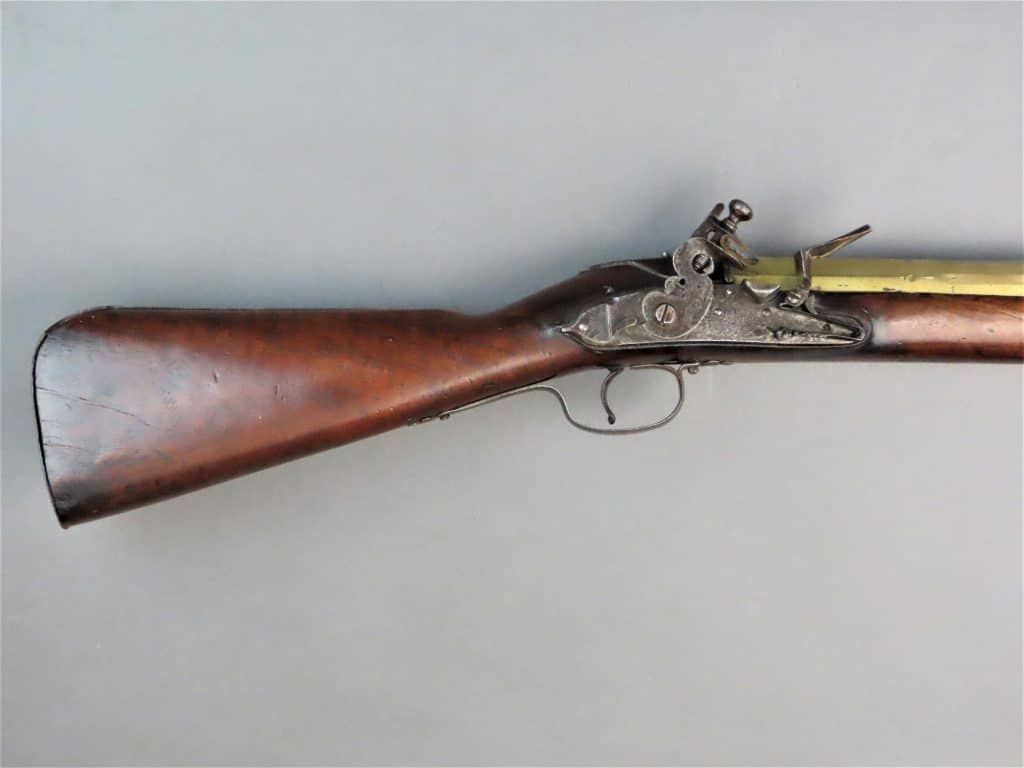 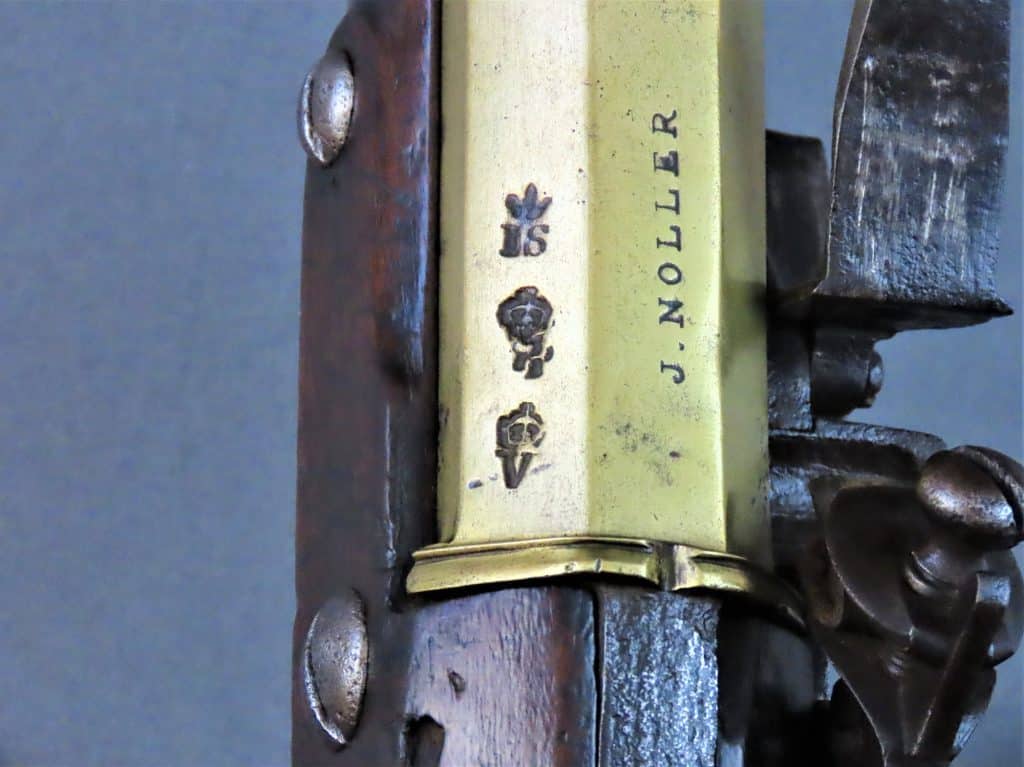 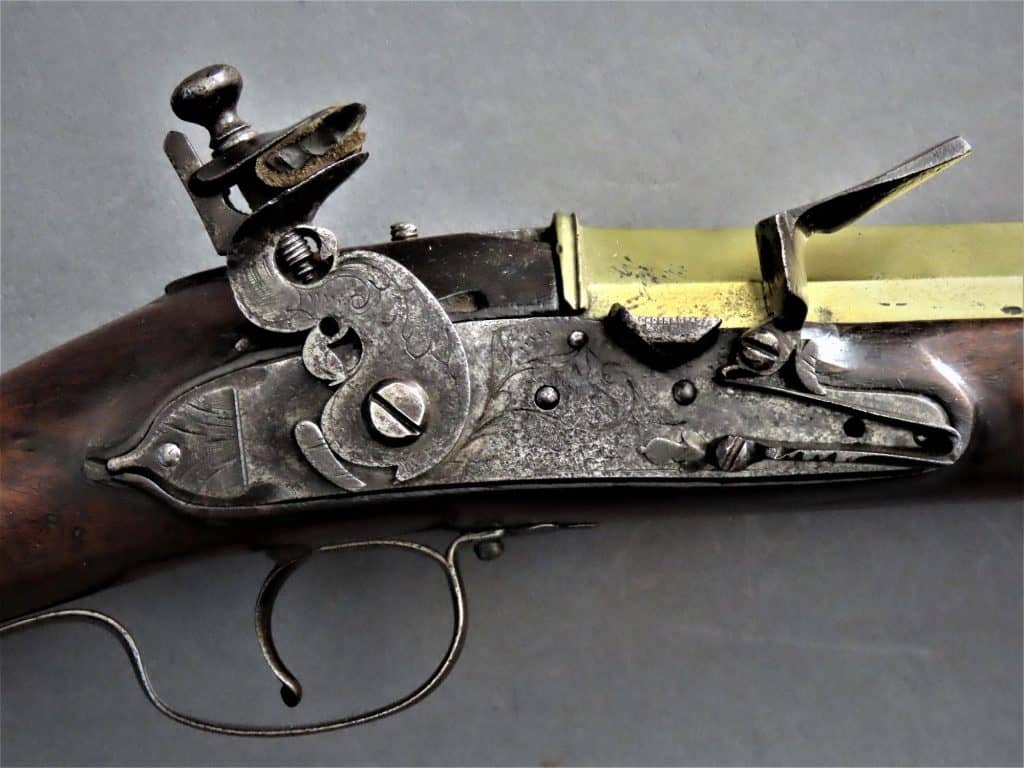 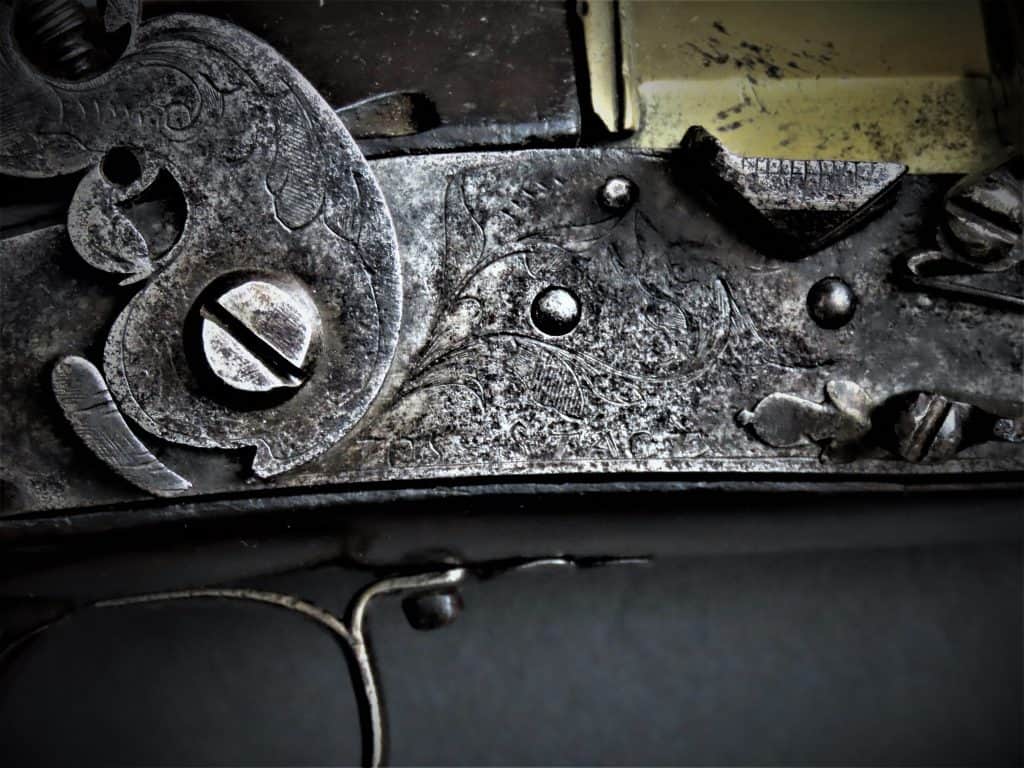 The trigger guard is of iron underneath which the head of the screw which secures the barrel tang to the stock on top is visible in front of the trigger. The guard terminates in two small trefoil finials and is secured to the stock with screws at either end. The trigger is of curved form and terminates in a backward scroll. 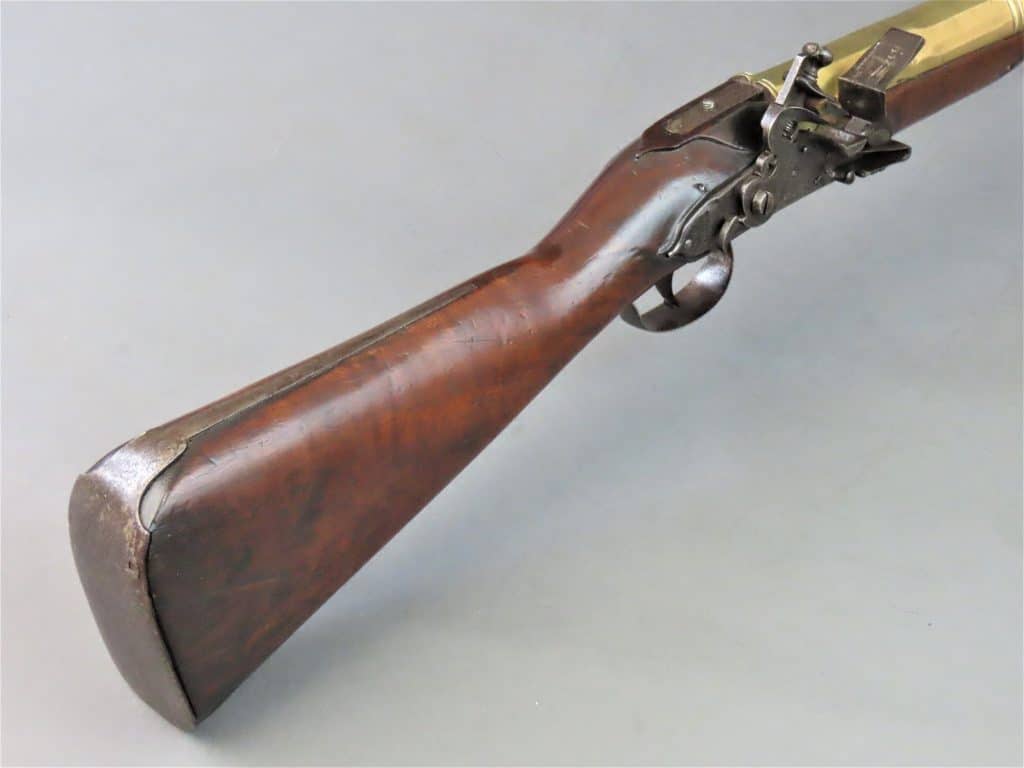 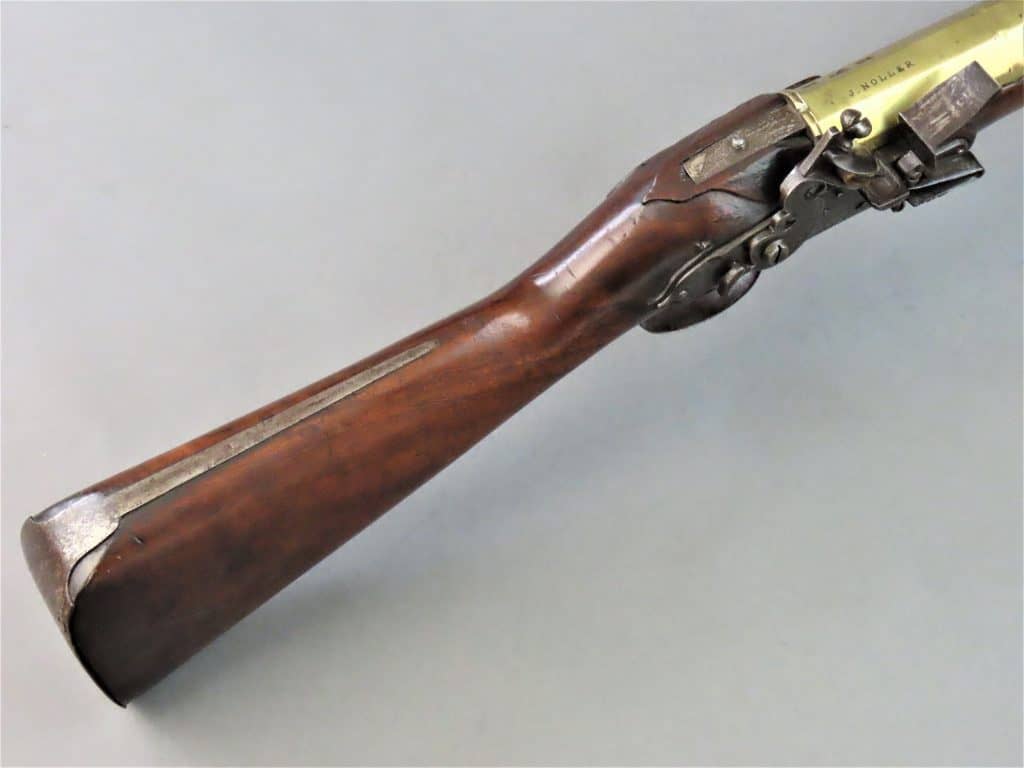 David Baxter (2) dated some features of blunderbusses of this type to early in the Reformation period compared to those made towards the end of the 17th century. These features are the vestigial dog catch, the sparse but fine engraving on the lock with the serpent, the triangular flash pan, the absence of a side plate where the heads of the three screws that secure the lockplate are located, the absence of a tail pipe for the ramrod, iron trigger guard with simple finials underneath, the screw which passes through the stock to secure the barrel tang on top, and the thin flat butt plate secured with tacks flush to the plate surface. 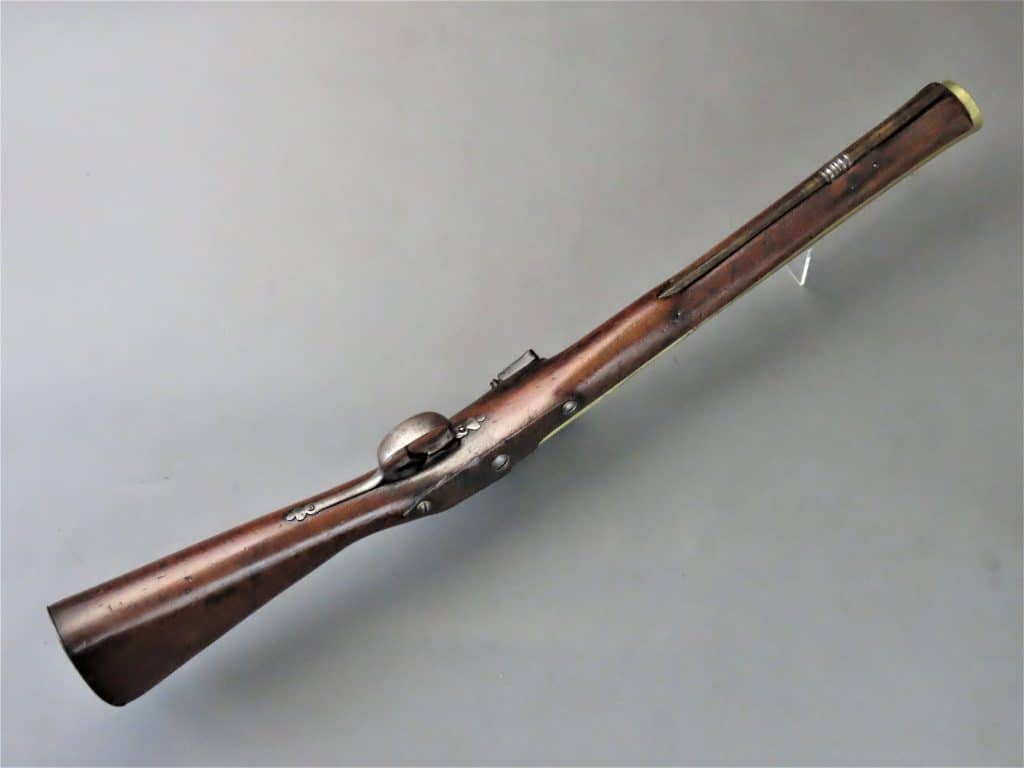 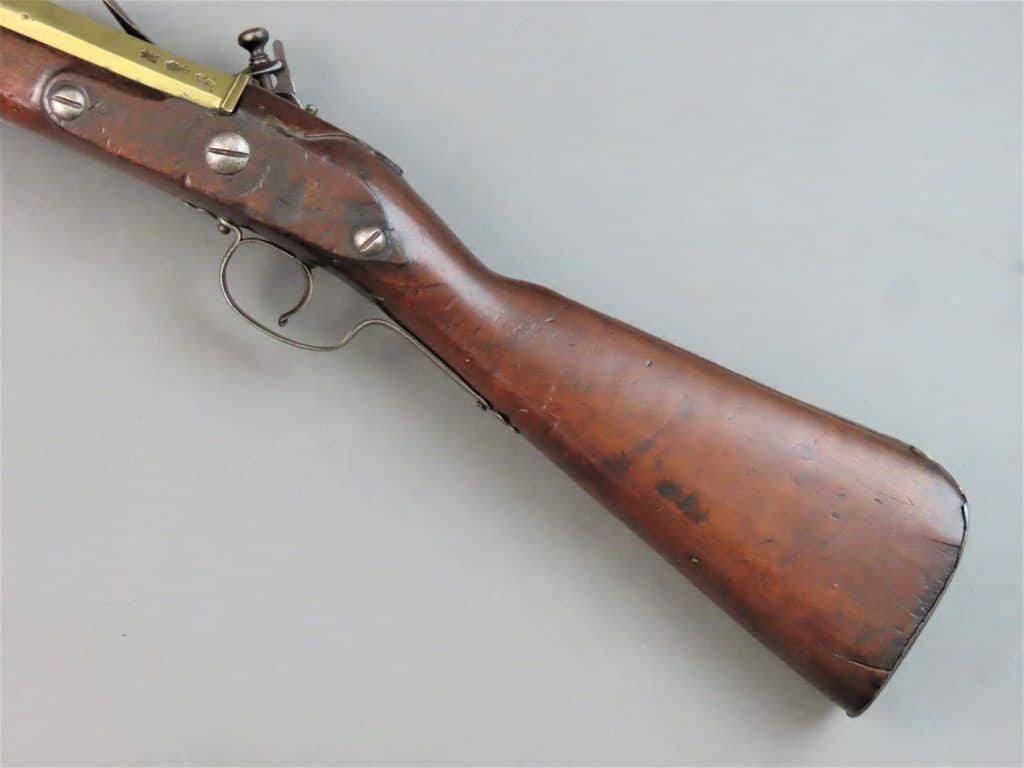 The blunderbuss is in fine overall condition considering its age. The stock has some bruises and a small old repair at the tip of the lock side fore end. The iron parts are lightly pitted in places and retain an attractive blackened sheen having never been overly cleaned. The stock exhibits an attractive aged patina darkened in the recesses.