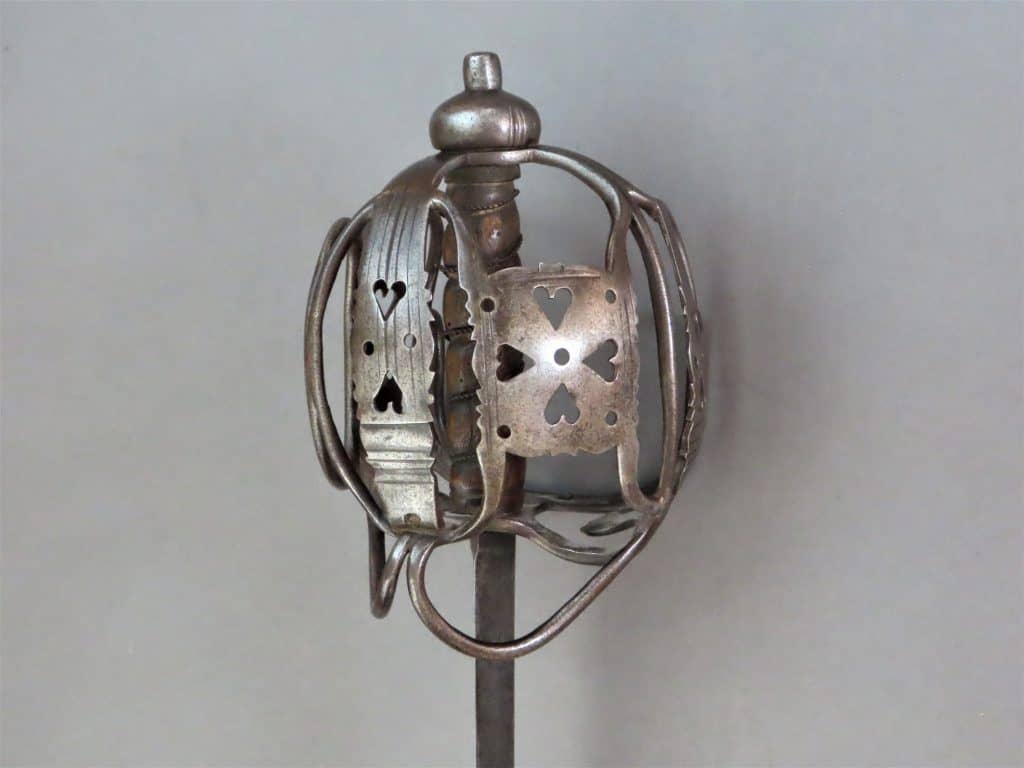 An impressive example of a horseman’s basket hilted back sword made for an Officer, or Trooper, of a North British / Scottish Regiment of Dragoons towards the middle and third quarter of the 18th century. These swords were issued by the Board of Ordnance to British regiments and were manufactured in the Scottish manner. They were first issued in the second quarter of the 18th century and were used during the Jacobite Rebellion of 1745, Britain’s wars in Europe and the American Revolutionary War.

The sword is a rare example of one that retains its remarkable full length blade of 38 inches (just over 96 cm) designed mainly for striking downwards at opposing infantry soldiers with greater reach than the more usual blade lengths of the time could afford. Although many swords of this type are mounted with blades of shorter length, the majority of those that were originally made with this longest type were cut down during the working lives of the swords. This is a rare survivor with its metal parts in extremely well preserved and undamaged condition as visible in the photographs.

The fully formed basket is pierced with flanged hearts and circles in the main front and side panel guards which are also finely fretted at the edges with chevrons and merlons. One of the more usual frontal guard plates has been replaced in the hilt design with an oval ring in the “horseman” fashion.

The arms of the guard are forged onto a circle of iron into which the base of the bun shaped pommel sits. The pronounced button is integral with the pommel and not of separate manufacture. The original spirally fluted grip is of hardwood and has its shagreen cover but retains its wire binding.

The robust single-edged blade has a thick spine and is double edged for the last 17.5 inches (44.25 cm) towards the point. It has a short ricasso and two fullers which commence 4.25 inches from the hilt. One wide broad fuller runs down the middle of the blade to the point and a second narrower fuller runs just underneath the spine to where the blade becomes double edged.

Overall the sword is in fine and original condition. For a further example of this sword type see Cyril Mazansky, British Basket-Hilted Swords, Boydell Press / Royal Armouries, 2005, plate F1e page 97 for a sword in the National Museums of Scotland, collection reference LA33.