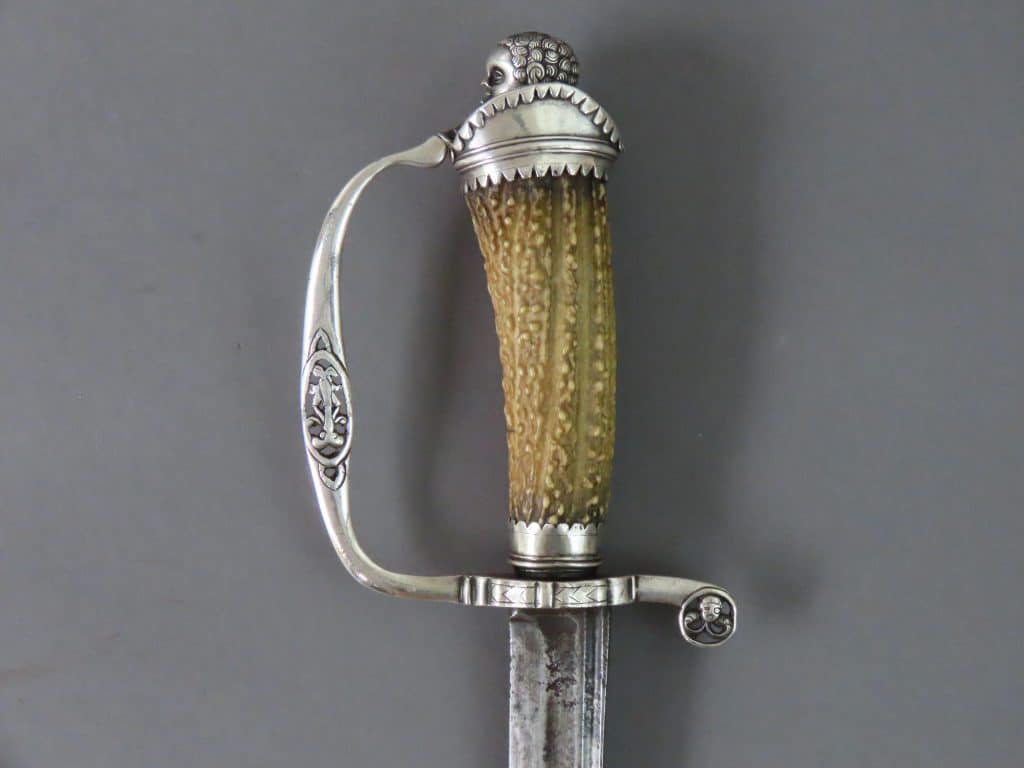 An important hanger by the accomplished cutler and silversmith Thomas Vicaridge of London. The hanger is distinctive because of its blackamoor head pommel which means the hanger probably has slave trade associations. The hanger is featured in Howard L Blackmore, “The blackamoor swords”, Royal Armouries Yearbook, Volume 3, 1998, pages 74 and 75, Figs 14a and b.

In the late 17th and early 18th centuries when swords were a popular weapon for gentlemen, hangers were a robust secondary side arm used for self-defence when hunting and travelling. They were also used in parts of the British Army and Navy. Hangers appear in some military portraits of the time.

The high quality hanger described here was a gentleman’s weapon. The knuckle bow is stamped with Thomas Vicaridge’s first pre-Britannia maker’s mark of “T V” in raised relief inside a shield, with a three point crown above, and a pellet below which dates the hanger to 1682 to 1697.

Vicaridge lived in exciting times as London was remodelled in the decades after the turbulence of the Civil War period, the Great Plague of 1665 and the Great Fire of 1666. The city was more outward looking, international trade was growing, military success was being achieved abroad and more interest and investment was being expressed in art and culture. Vicaridge was one of the leading craftsmen of his day and the quality of his work represents the styles and fashions of late 17th and early 18th century Baroque London.

The hilt is comprised of a bold faceted quillon block with a downward facing flattened circular rear quillon pierced and chased with a cherub’s head on top of a double scroll. The knuckle bow is of flattened oval section and swollen in the middle where it is pierced with a foliate panel inside a cartouche on each side.

The pommel cap is scalloped around its folded edge which envelopes the natural stag antler grip with its pronounced “V” shaped groove on top. The pronounced blackamoor head sits prominently in this groove protected by its sides. The terminal of the knuckle bow is fixed into the pommel rim with the tip placed into the mouth of the blackamoor to emulate the playing of a musical instrument. The grip has a silver ferrule at its base with a scalloped edge.

Thomas Vicaridge completed his apprenticeship with Joseph Jones, a London Cutler, on 25th April 1682 when he was sworn “Free” upon completion of his term of servitude at a well-attended meeting at Cutler’s Hall. Until 1697, along with other silversmiths, Vicaridge used his own mark as described above and stamped it onto this sword. Two examples of this mark are struck onto a copper plate still preserved at Goldsmith’s Hall in London. In 1697, with the advent of the Higher, or “Britannia”, Standard for silver, smiths were required to record a new punch mark bearing the first two initials of their surnames. As a result, Vicaridge recorded the mark “VI” with a crown above and pellet below inside a shield. This mark was used from 1697 onwards until his death in 1715. Only a few surviving edged weapons by this maker are known and all are of high quality.

The slightly curved single edged blade is 20 inches long (51 cm) and is forged with a short ricasso and a wide shallow central fuller which extends from the hilt almost to the pointed tip on both sides. A narrower, deeper fuller runs from the hilt underneath the blunt back edge for four fifths of the blade length after which it is double edged for the remainder of its length to the tip.

The sword is in good condition and has survived the centuries well. The hilt has retained its attractive shape and contours. There is some wear to the blade which has a light layer of old pitting and the stamps of Vicaridge are worn. There are two stamps both on one side of the knuckle bow. One is located underneath the central cartouche and is discernible whilst the remains of the other located above the cartouche is just realisable but only in light of the first.

Swords and other valuable ornaments were produced featuring blackamoor heads as exotic adornments for European nobility for centuries before our hanger was made by Vicaridge. In his paper published in 1998 Howard L Blackmore explored the subject of “The blackamoor swords”. In the last part of this study he describes four English silver hilted hangers of the late 17th century with blackamoor heads which he thought at the time was the entire known population. He describes these as the “last of their kind” at a time when the blackamoor had lost much of its mystical appeal and after which it did not appear again in the same manner as it did in the past. By the end of the 17th century black Africans were reduced to being perceived more as slaves and trade cargo. In his conclusion he suggests in explanation for the swords that they may have been made for members of a secret society or bizarre club in London that used the blackamoor head as its emblem. This is unlikely.

Figure 15 illustrated by Blackmore shows a sword by Thomas Vicaridge which he dates to around 1700. Significantly the middle of the knuckle guard has a royal bust with a crown above which undoubtedly represents an English monarch. This is not a one-off. A similar bust appears on another sword by Thomas Vicaridge with a blackamoor head pommel recently sold through our business. There were probably many more made which have not survived. The link between the royal bust and the blackamoor head should be explored further.

The ruling monarchs of England held a monopoly on the British slave trade through the Royal African Company that lasted from 1660 to 1698. Vicaridge’s mark on the sword we recently sold dates to 1682 to 1697. Blackmore dates his Figure 15 to “about 1700” indicating that the date is uncertain.  The hanger is described as in a private collection and is not available for examination. It is probable that both hangers were worn as symbols by employees and others to affirm their association with the Company, engaged because of the Crown’s involvement in the slave trade, either before or after the monopoly was opened up, and English merchants were allowed access to this business. The bust together with the blackamoor pommel seems sufficient to establish a connection between both these hangers and royal patronage of the slave trade. Subsequently is follows that hilts mounted with the blackamoor heads and not stamped with the royal busts have the same association.

The sword featured here is illustrated in Figure 14a and b by Blackmore. However, there are errors in his description. Blackmore dates the sword by its hallmarks to 1702 yet none are present and he does not acknowledge the presence of Vicaridge’s pre-Britannia stamp on the knucklebow.

Of the four “blackamoor” hangers in Blackmore’s paper three are complete and one is a detached grip. So five hilts of this type are now known. Blackmore assumed that the swords may not have all been made by Vicaridge. However, of the population of five, three are known to be by Vicaridge. The marks on the other two are probably too worn to identify a maker or have not been examined well enough. However, the workmanship involved in these two hilts is so similar to the other three blackamoor swords by Vicaridge, and other surviving swords by Vicaridge with more usual pommels, that we can reasonably assume he made all of the blackamoor pommel silver hilted hangers.

Some of these other surviving hangers with more usual pommels are discussed in a paper by Leslie Southwick published in the Royal Armouries Yearbook (Volume 5 in 2000) alongside other swords by Vicaridge. The styles of grip, ferrules, guards and quillon terminals are notably similar to the blackamoor pommel group.

Taking into account all of the above, production of these blackamoor pommel hangers can be tied to a short time period at the very end of the 17th century and it would seem that Vicaridge alone was specifically commissioned to make these hangers for reasons and by people now unknown who were associated with the slave trade.