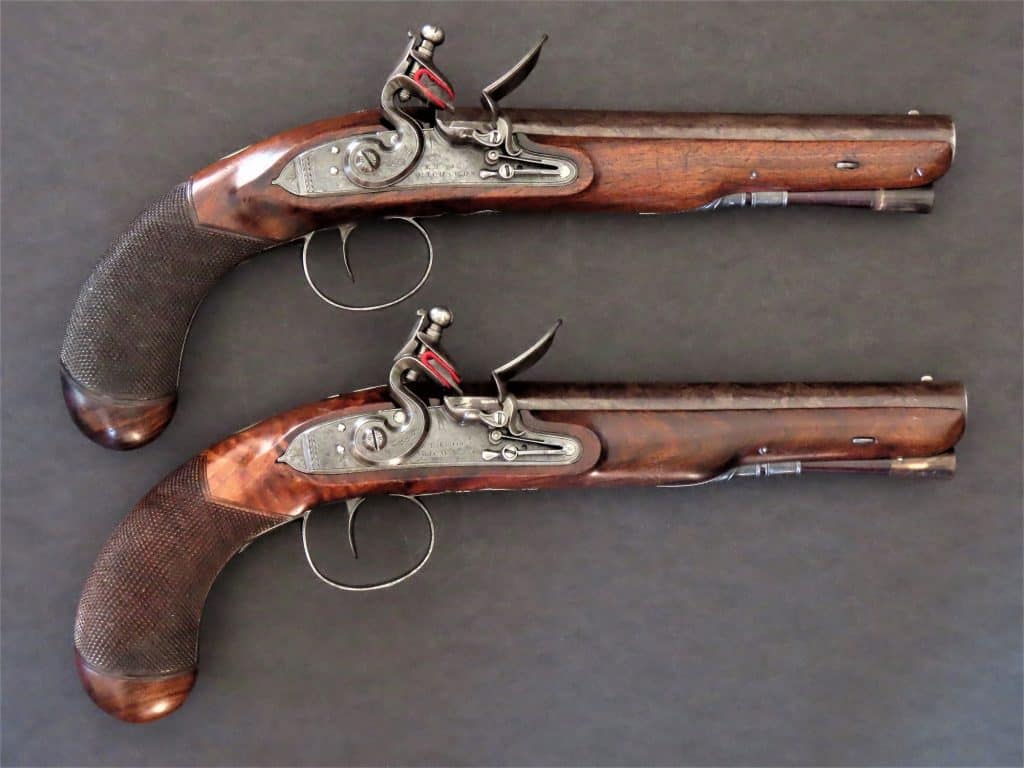 Theophilus Richards was one of the most successful, influential and talented gunmakers of the early 19th century who helped strengthen the position of Birmingham as a major gunmaking centre for the British Empire. He is recorded as manufacturing guns under his own name by 1799 and retired from his businesses in 1825.

These pistols are in near mint condition and of fine quality. The stocks are of walnut and the mounts of iron and steel which retain remnants of original blued finish. The tapering, round section, smooth 28 bore browned barrels are stamped with the maker’s name THEOPS RICHARDS on the flattened tops near the breech and with Birmingham proof marks underneath. Each is mounted with fore and rear sights. The barrel tangs are engraved with chevrons and a shield.

The flat, stepped, bordered lock plates are engraved on the nippled tails in similar manner to the barrel tangs. The maker’s mark in similar form to its appearance on the barrels is clearly stamped underneath the pans. The flat, bevelled, swan necked cocks have chamfered edges bordered with engraved lines and strands of foliage in the middle. The frizzens are engraved in peascod style to the outsides and the frizzen springs are roller mounted. The trigger guards are shaped with pineapple finials and engraved on the bows with shields and foliage similar to the barrel tangs and lock plate tails. The ramrod mounts are finely shaped and bordered in similar style to the cocks. All of the major screws are engraved with starbursts. The full walnut stocks have finely chequered grips. The ebony ramrods are tipped with horn and one is mounted with a steel worm. A small silver escutcheon is mounted onto the spine of each butt engraved with the monogram “CF” in each case.

The condition of the pistols is excellent, almost mint. There are a few minor dents on the reverse sides of the stocks with a couple of very minor stress cracks on one side. The stocks retain an attractive auburn colour to the grain. The iron furniture is in fine condition with the remains of original blued finish in places. The barrel browning is near complete. The locks are in fine symmetrical working order and the mainsprings and frizzen springs are of equal tension. The barrels are just over 7.5 inches long (19.5 cm) and overall measured diagonally extremity to extremity the pistols are 13.5 inches (34.25 cm) long.

The father of Theophilus was Thomas Richards who died in 1779, a successful businessman that owned gunmaking and other concerns in Birmingham. He is the originator of the fortunes of the celebrated Richards family. Thomas traded overseas and like most gunmakers of this period profited from the American War of Independence and the slave trade in Africa. He influenced the development of the gunmaking trade in Birmingham. He was a member of a delegation from Birmingham in 1759 that visited Wales to look into the quality of iron produced for their goods. A Thomas Richards was interred at St. Philip’s Cathedral Church in Birmingham in 1779 and is supposed to be the father of Theophilus. Theophilus had worked with his father and took over his businesses, probably continuing to manufacture and trade in his father’s name, for the next 20 years until he changed the name of the firm.

Theophilus was manufacturing guns in his own name by 1799. At this time he was 52 years old and undoubtedly already an established gunmaker. He held a Royal contract for the manufacture of arms for the British Army. Unlike many other gunsmith businesses, which assembled separate parts made in different workshops in Birmingham, the Richards’ family always had their own gunmaking factories on High Street. Hence, we can be reasonably sure that the pistols featured here were made “lock, stock and barrel” by the Richards business rather than produced as an assembly of contracted parts. The works that belonged to Theophilus was called “The Royal Patent Waterproof Gun Manufactory”, indicating the continuing interest the family had in developing patents for the improvement of guns.

As a wealthy merchant Theophilus played his part in the expansion of Birmingham town. In 1803 he was High Bailiff of Birmingham and in 1808 he sat on a committee with Boulton, Watt and the politician, Thomas Attwood, dealing with new waterworks for Birmingham. His will shows that he invested in canal shares, as did most of Birmingham’s wealthier citizens. An important gunmaker during the Napoleonic Wars he was respected by the Duke of Wellington for the quality of his muskets. At some time Theophilus moved to Edgbaston in the outskirts of Birmingham where he is recorded in 1815. Edgbaston at the time was described as a place of fine villas built for rich merchants. The gun business of Theophilus was most likely absorbed into that of his son William Westley Richards, either upon his retirement, or on his death in 1828, thus opening a new chapter of gunmaking in Birmingham. Theophilus was a well-connected man when he died. Executors of his will included Thomas Westley Oldham, who was High Sheriff of Leicester. A monument was erected in St Philip’s in memory of Theophilus.