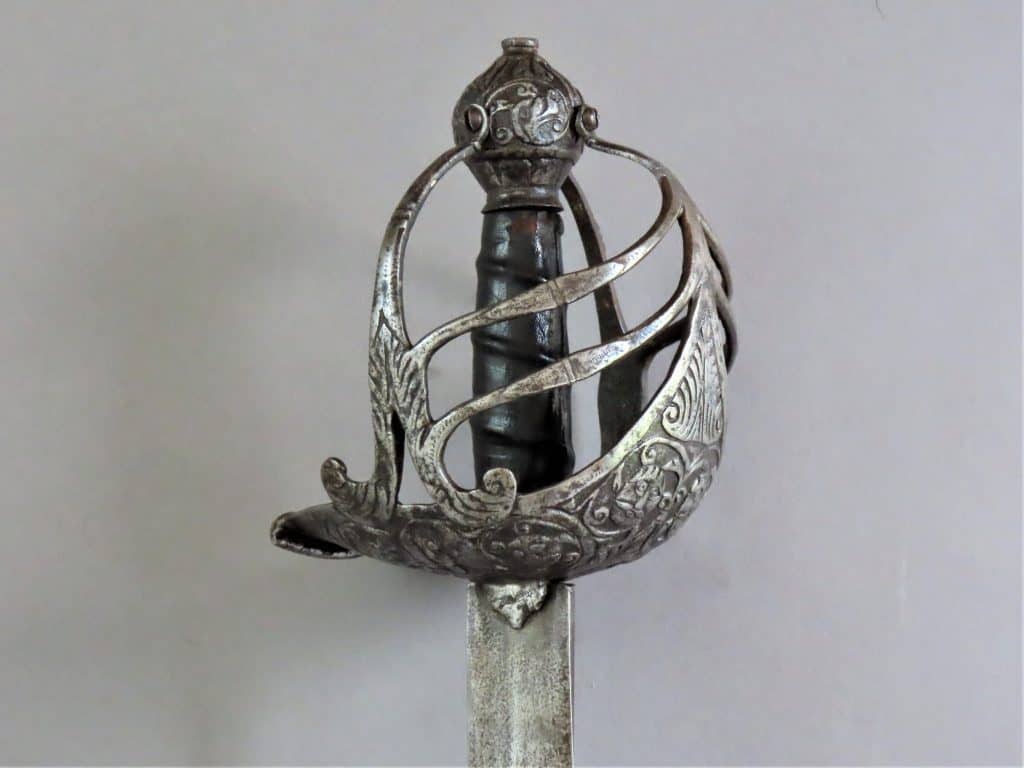 A fine English “Mortuary” hilted sword dating to the middle part of the 17th century and the English Civil War, Commonwealth and Protectorate periods.

The hilt of this sword is of typical form consisting of a broad saucer-shaped guard plate from which three main curved flattened guard bars taper upwards ending with flattened angled terminals screwed into the pommel. The sword is notable because of its robust build, fine condition and the higher than average quality of the chiselled decoration.

The convex surface of the guard plate is covered with the finely executed busts of eight men, four located either side of the blade. Two, opposite each other, are wigged figures, probably judges. The others have a more grotesque appearance. The remaining spaces are filled with panels of delicate foliage and fine swirling tendrils. The pommel is decorated in the same foliate style.

Two downward facing bars emanate from each side of the knuckle bow towards its middle and join the base of each side guard bar to add strength to the structure. The base of each side guard bar is strengthened with a fishtail or merlon terminal which joins the bars to the dish.  The downwardly curled ribbed wrist guard strengthens the rear edge of the plate. The guard bars are decorated with chiselled lines. The pommel is globular in shape and has an integral button on top and a pronounced flared neck beneath.

The wooden grip is spirally wrapped with a binding in raised relief and covered with leather. It sits on an iron flanged plug mounted onto the inside of the guard plate from which two langets extend through the tang aperture to flank the blade either side for a short distance below the hilt.

The single-edged blade has a pronounced fullered ricasso. A broad shallow fuller runs from the hilt underneath the blunt spine of the blade and terminates a short distance from the tip after which the blade is double edged. A second shorter fuller of similar width opposite the first runs each side for the length of the ricasso after which the main cutting edge of the blade begins. An unknown Blade Maker’s stamp is applied on each side within the fuller as is an orb and cross mark a short distance away.

The blade was probably made in Solingen in Germany. Huge numbers of blades were imported into Britain during the Civil War period to fulfil demand for swords on both Royalist and Parliamentarian sides.  The blade is 33.75 inches long (86 cm) and overall the sword measures 40 inches (101.5 cm) long.

The similarities between the engraved patterns on the hilts of the swords illustrated in these books and our sword, although they are all somewhat different, shows that the quality of chiselling and engraving present on our sword is of superior quality compared to most other than those known to have been commissioned for nobility of one form or another.

This sword is of a style which does not adopt the secondary rear guard bars which appear on some mortuary swords which extend downwards from the  side guard bars to fix on the guard plate nearer to the wrist guard edge.  The robust and broad expanse of the guard of this sword dispenses with the need as can be seen in the examples present in Mowbray and Mazansky.