A splendid swept hilt rapier which has survived in fine condition and retains much of its original gilt finish to the hilt. The type is illustrated in many portraits of early 17th century date located across Europe including England, Scandinavia and the German States. This indicates that the rapier form was very popular amongst the social elites in the region at the time. In contrast, few have lasted the rigours of time and over four hundred years later surviving examples are scarce. 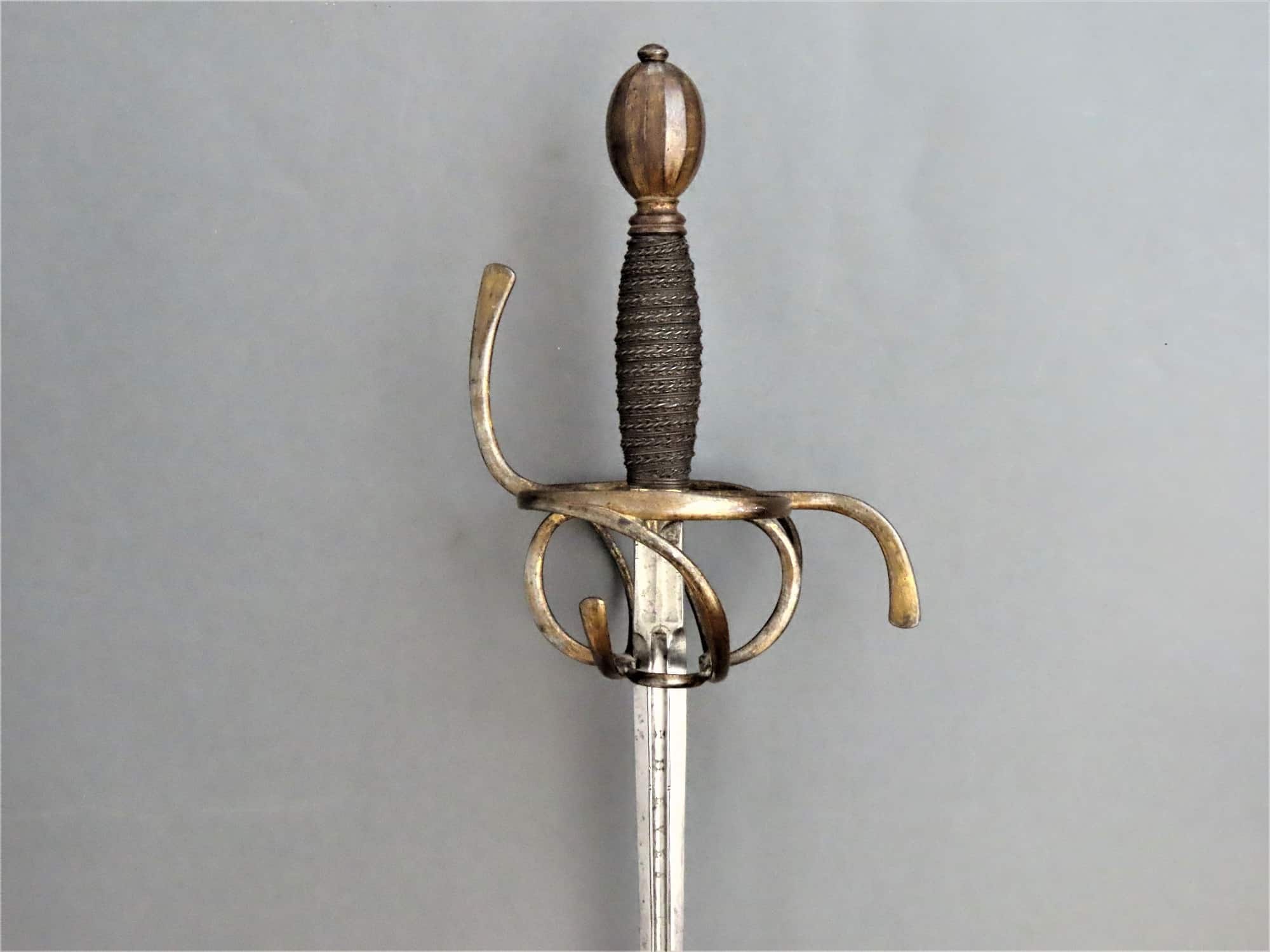 The weapon is an elegant example of the early 17th century armourer’s craft formed with attractive flowing curves to the complex hilt which complement the strength of its construction. The hilt is made from oval section bars which give a stylish contoured appearance. The rapier is 45.25 inches (114.5 cm) long overall and is well balanced and comfortable in-hand. 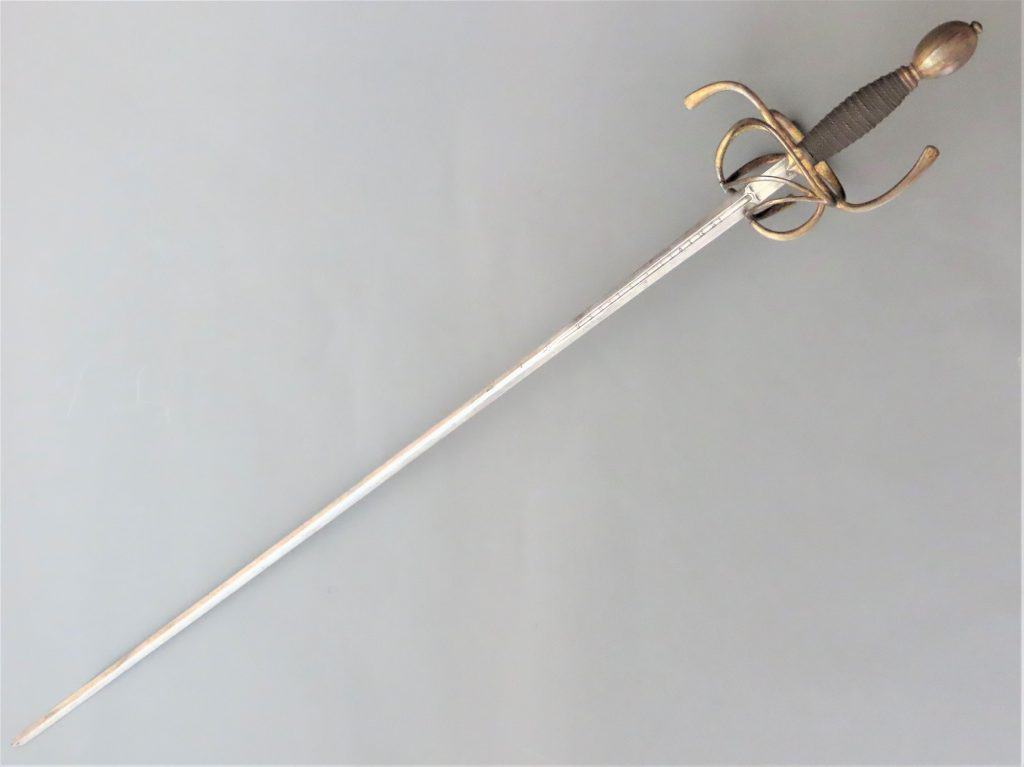 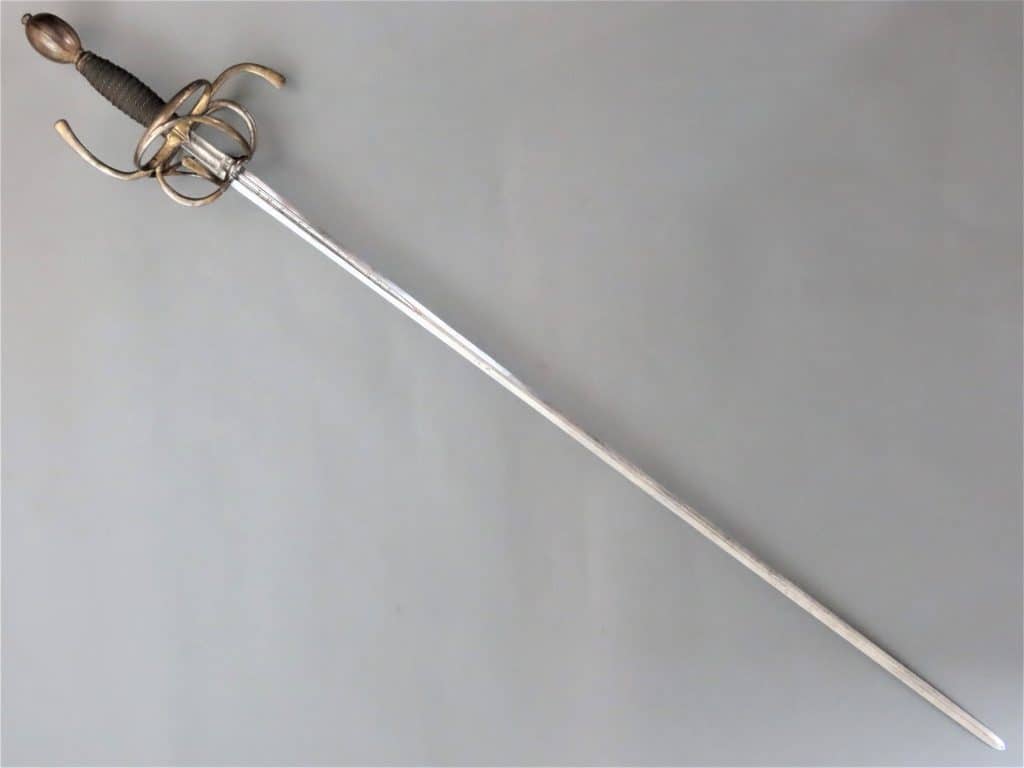 The hilt platform is the strong quillon block with its short downwardly pointing langets from which extends the rear quillon, which curves downwards, and the front quillon, which is slightly longer and curves upwards into a knuckle bow. Both quillons swell slightly into smoothed terminals. Beneath the block outwardly curved symmetrical finger rings extend downwards either side of the langets. 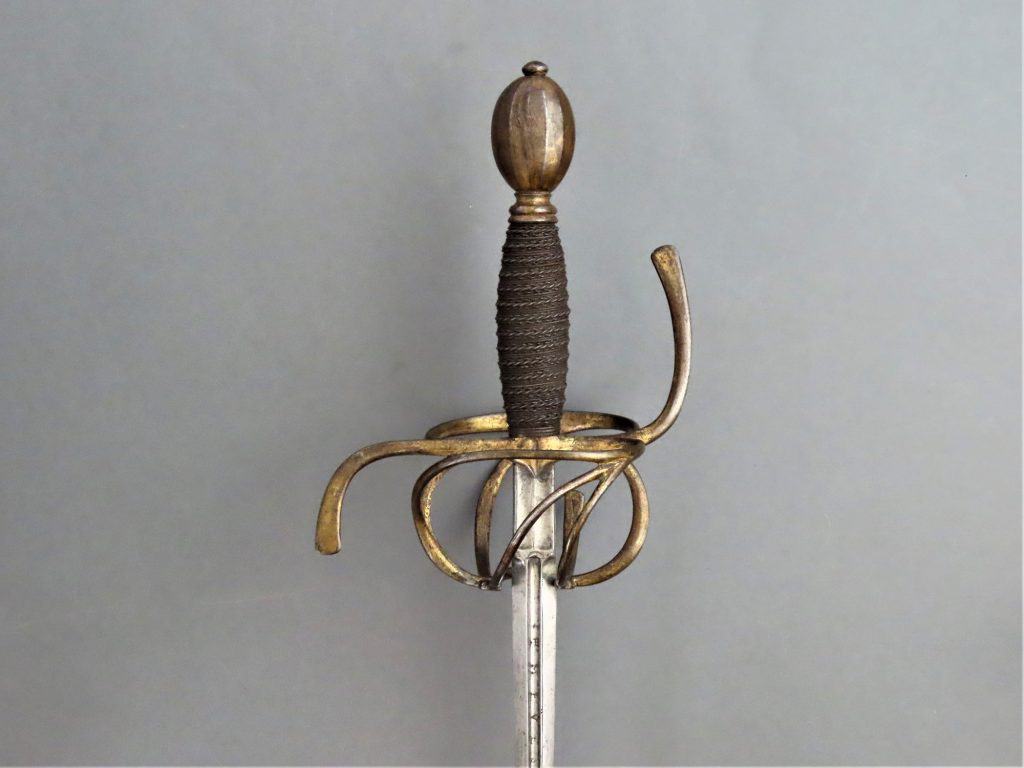 On the outer side of the hilt an imposing guard ring is linked by a diagonally downcurved bar to a small side-ring beneath which is mounted onto the finger ring terminals. The space opposite is filled by an upwardly curved bar emanating from the other side of the ring. 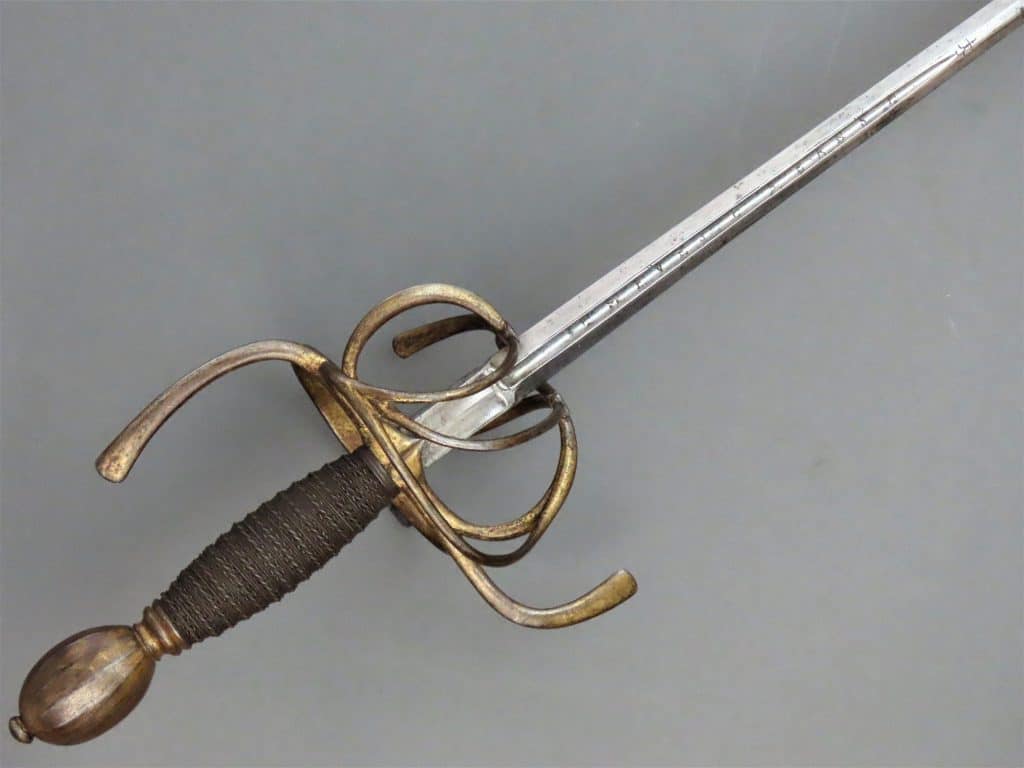 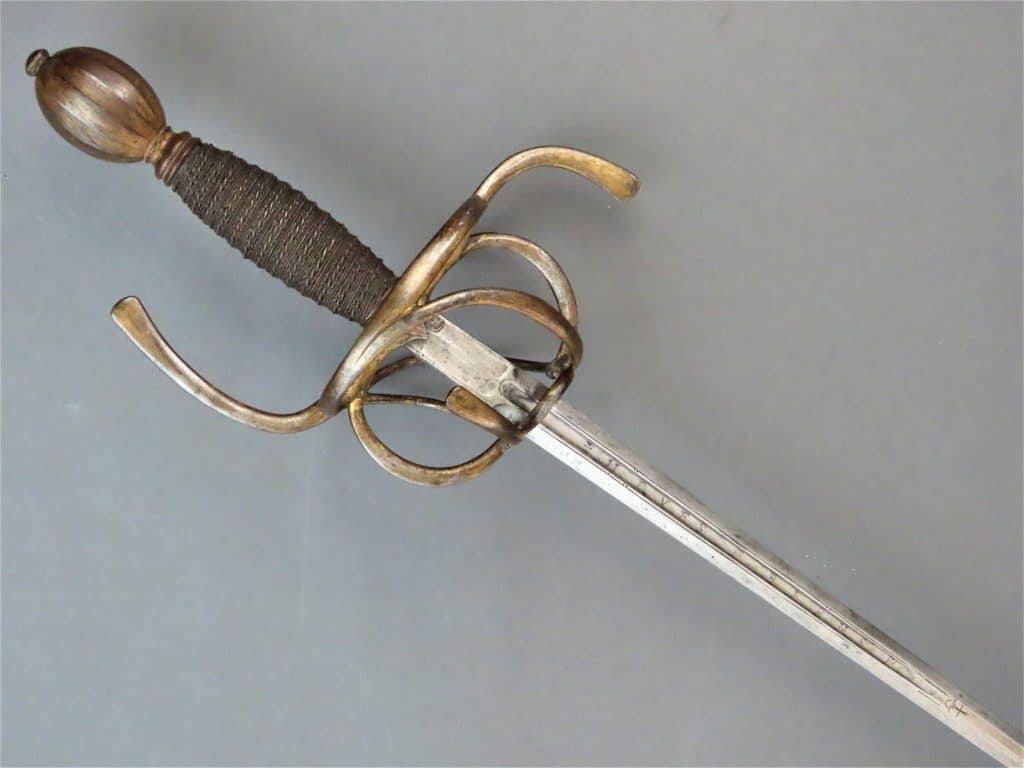 Three slender bars of circular section form the inner counter guards which are “swept-up” into one bar and merge into the forward quillon. The tall faceted ovoidal pommel is of bold form with a button on top and ribbed flared neck beneath. The baluster shaped grip is bound with alternately spaced twisted and straight lengths of wire. 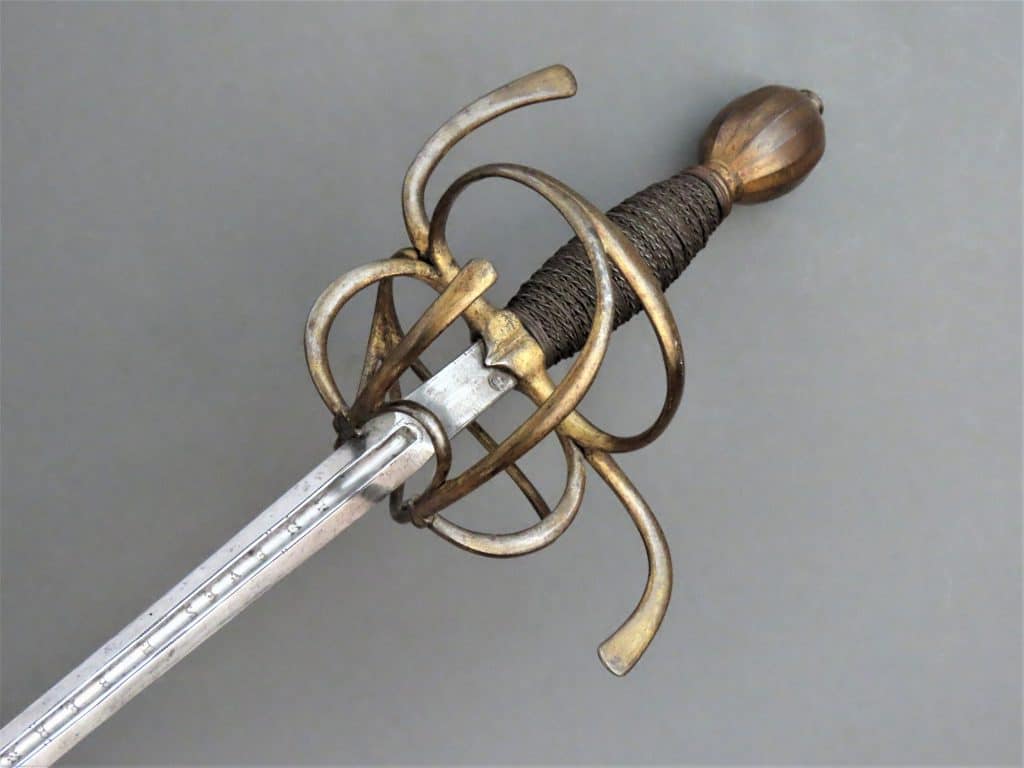 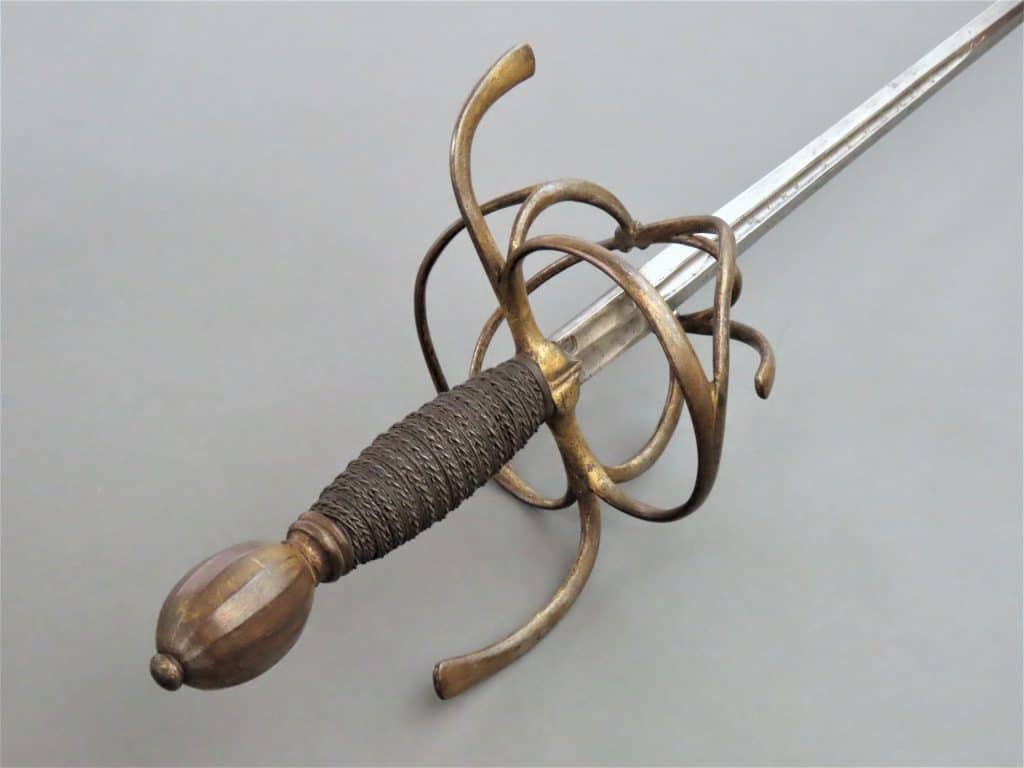 The fine quality blade is of stiff, gently tapering, flattened, hexagonal section which retains its original length of just over 38 inches (97 cm).  It has a ricasso 1.5 inches (3.5 cm) long cut with two bold fullers which fill the width of the space side by side on each face. The right side fuller, seen when the rapier is held point down on each side, is stamped with a roundel containing a stag which is the mark of Meves Berns. A deep central fuller extends for 8.5 inches (21.5 cm) from the end of the ricasso and is cut with lines on the ridges either side and stamped with a stylised cross just beyond its terminal on each side. The fuller is incised each side with “M E V E S    B E R N S” in spaced capital letters with a cross potent mark between the words and at each end. Berns was an accomplished blade maker based in Solingen. 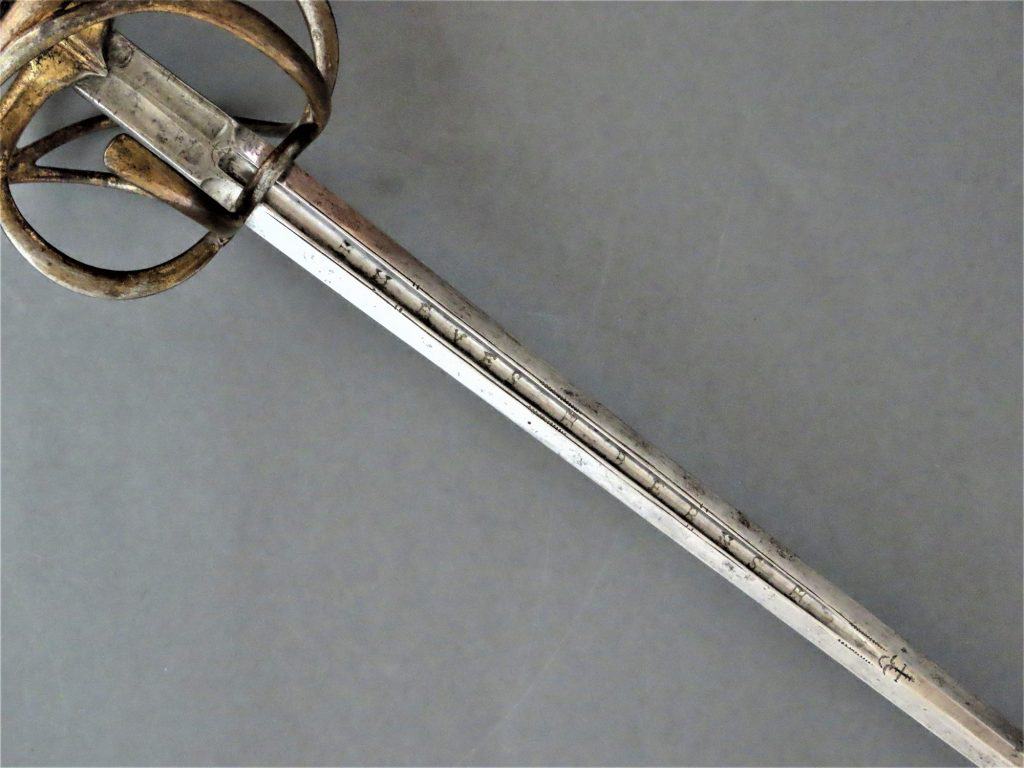 For more information regarding other examples and locations of rapiers of this type see A.V.B. Norman, The Rapier and Small-Sword 1460-1820, Arms & Armour Press, 1980, pp. 94-95. The guard is of Type 31 in Norman’s typology. Plate 49 shows a rapier of the type in the Wallace Collection (Collection Number A627) dated to circa 1610-1620 with a russet steel hilt counterfeit damascened with gold and of North European origin. Plate 51 shows another with fire-gilt steel hilt of the same date and locality, originally from the Electoral Armoury in Dresden.