An exceptional cased set of edged weapons that belonged to Lieutenant Wyndham Neave of the 71st Highland Light Infantry who was killed in action in 1858 at Morar, near Gwalior, Central India, during the Indian Mutiny

Lieutenant Wyndham Neave was killed at Morar during the advance of the forces of Sir Hugh Rose against Gwalior in Central India on 16th June 1858. He  was born on 21st November 1834, the 4th son of Sir Richard Digby Neave, 3rd Baronet (1793–1868), who was an English artist and author. 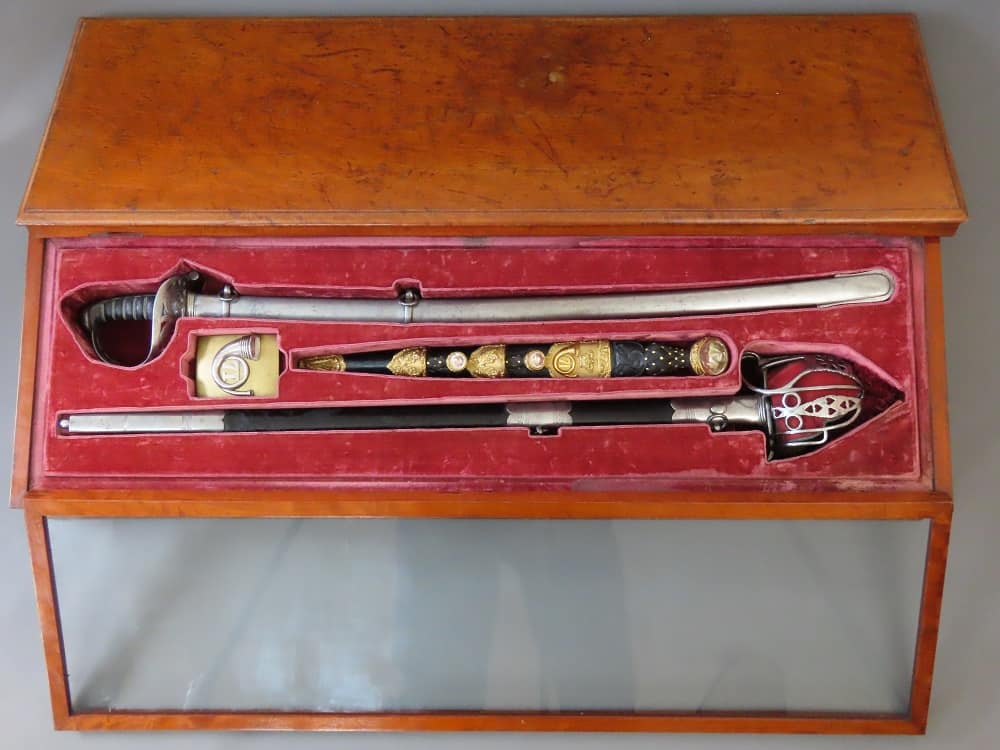 Kaye & Malleson recount the action in which Wyndham was killed as follows:

“The main body of the enemy, driven through the cantonments, fell back on a dry nullah (a steep sided watercourse) with high banks, running round a village, which they had also occupied. Here they maintained a desperate hand-to-hand struggle with the British. The 71st Highlanders suffered severely, Lieutenant Neave, whilst leading them, falling mortally wounded; nor was it till the nullah was nearly choked with dead that the village was carried”.

In a more personal account Lieutenant John Lightfoot of the Bombay Horse Artillery described the action as follows in a letter to his father:

“Just at this time there came a cheer from the rear and up came the 71st at the double, I ceased firing and they rushed past straight at the nullah, the rebels did not wait for their approach but, throwing down their muskets they drew their swords and waving them over their heads, dashed forward to meet the 71st, young Neave son of Sir Digby Neave was killed at the first onset, but not a rebel escaped. They were killed to a man!’ Besides Lieutenant Neave, the 71st had four men killed and five men wounded, four of those severely”. 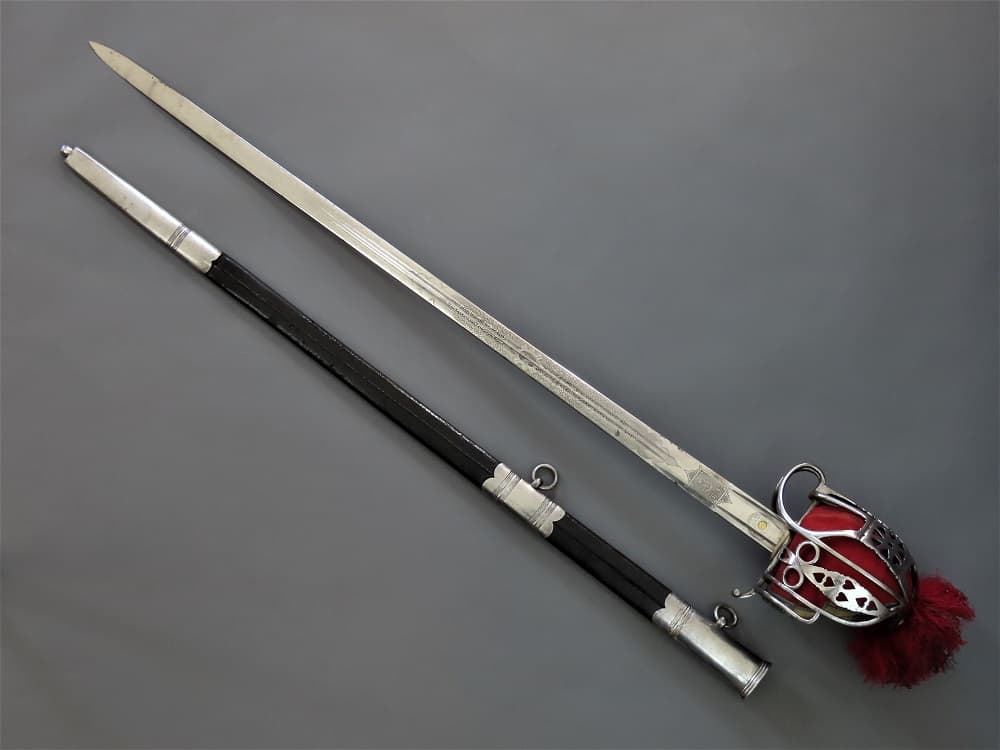 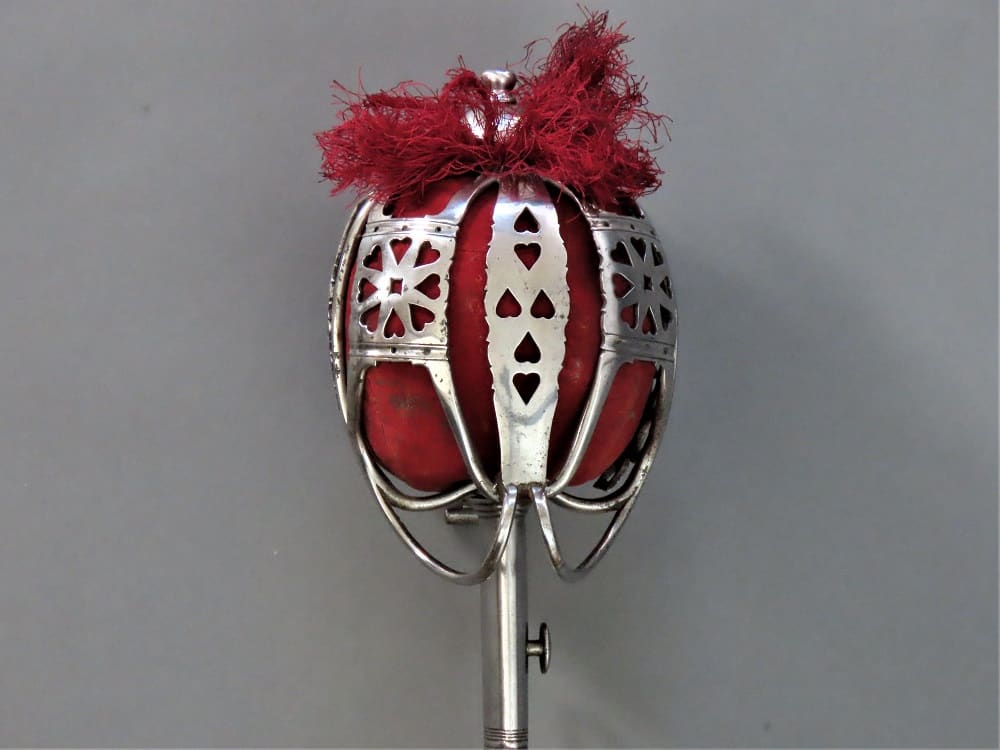 The set consists of a dress basket hilted broadsword, a field service sword, a dress dirk and a shoulder belt plate, all notable for their excellent quality and fine condition. The set is contained in purpose built contemporary fitted mahogany case with locks fitted to each side. When the top lid is lifted off a second glazed lid is revealed through which the items are viewed from a respectable distance. This can also be lifted off to access the items by hand which are seated in shaped hard lined apertures lined with plum coloured velvet. 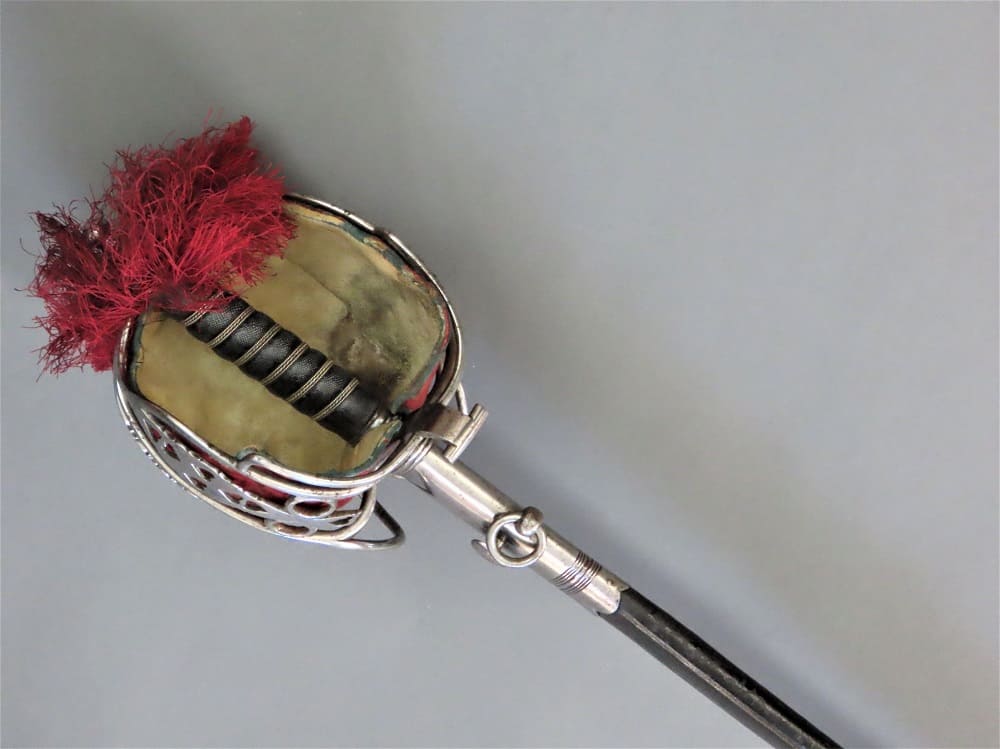 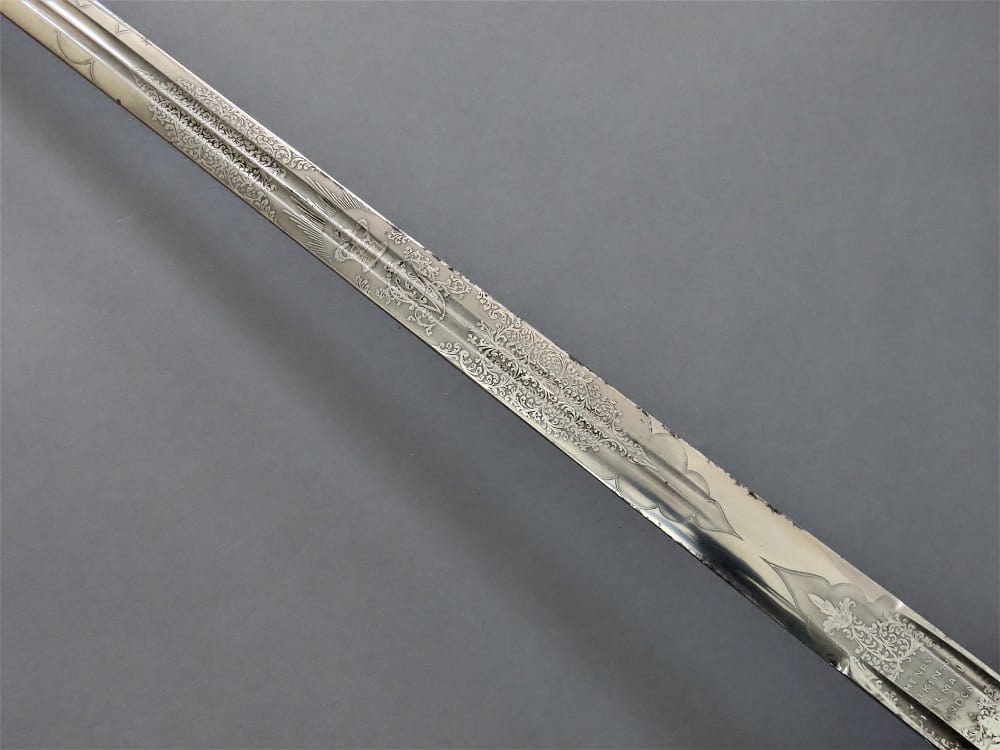 The basket hilted broad sword is by Henry Wilkinson and not numbered. Henry Wilkinson began their numbering system in 1854 which dates the production of this sword to circa 1848-1854. The regulation pattern straight blade is 32.25 inches (82cm) long and profusely etched with fine designs. The pronounced ricasso has a deep fuller near to each blunt edge and further along the blade two central fullers run in parallel. Inside the ricasso on one side is “HENRY WILKINSON, PALL MALL, LONDON” and on the reverse side a star shaped cartouche with a brass stud inside stamped with “HW” in raised relief. Just beyond the ricasso on the same side is an ornate cartouche with the owners initials “WN” and crest. 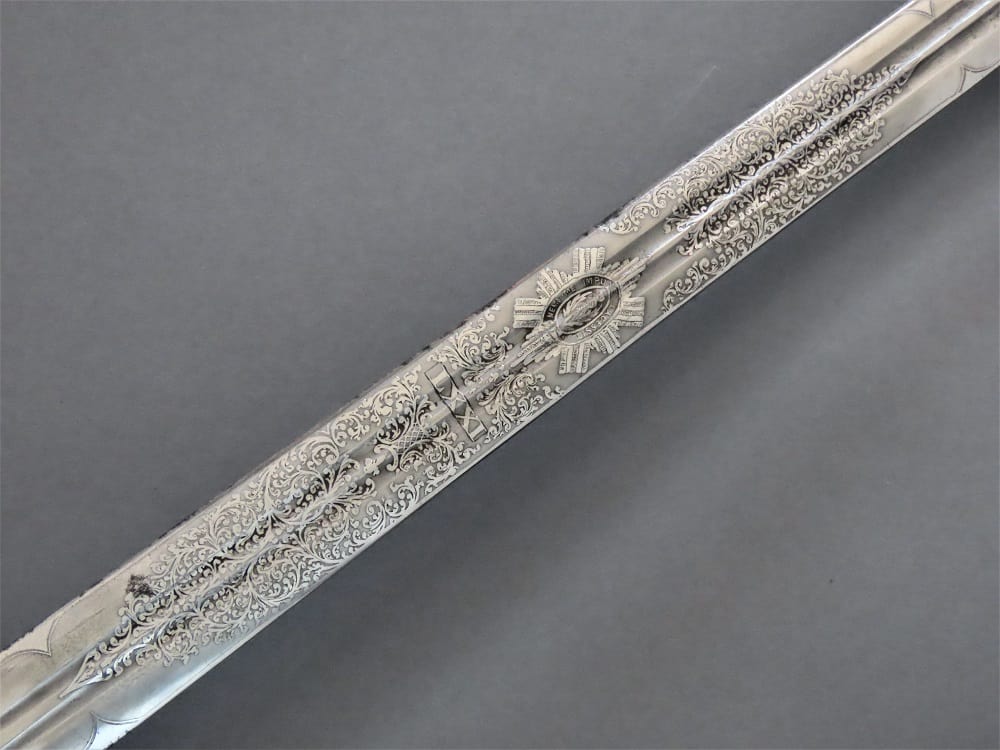 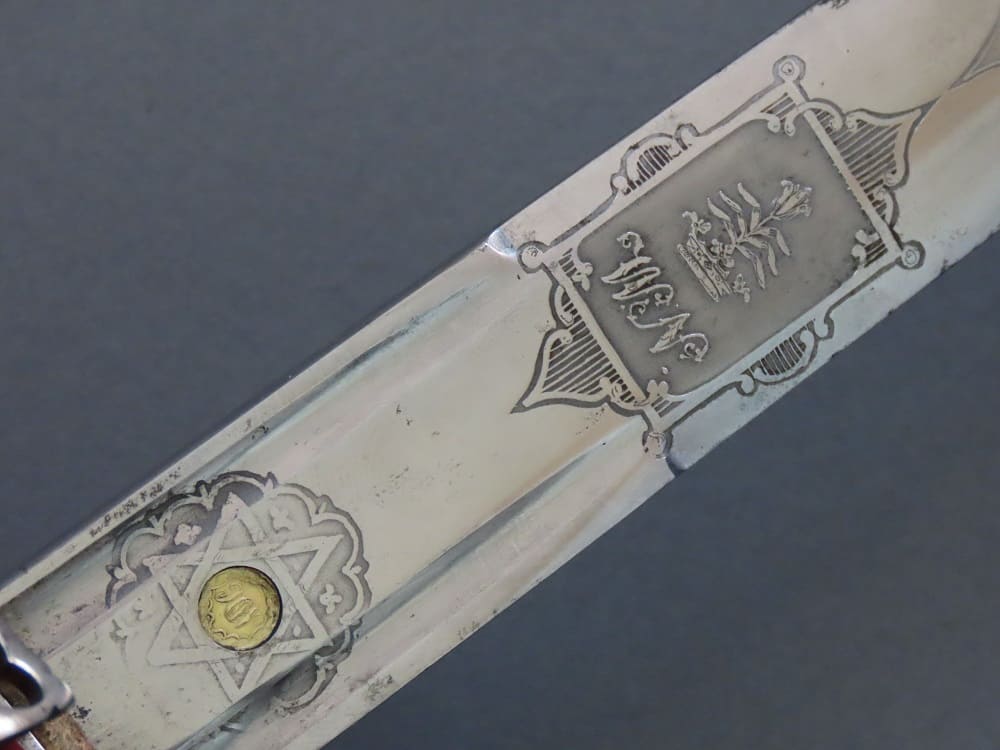 Further along on the same side is an elaborate foliate panel which contains the regimental emblem and the numerals “LXXI”. On the reverse side a similar foliate panel contains the “VR” cypher with a crown above. The regulation basket guard is pierced with hearts and circles, mounted with a fluted bun-shaped pommel with button, wooden spirally grooved grip covered with black shagreen bound with silver wire, and retaining its red fringe and scarlet cloth faced buff leather liner with blue silken hem. The sword retains almost all its original finish. The sword is contained in its black leather scabbard with three matching steel mounts with linear engraving, the top locket with suspension ring and frog stud and middle mount with suspension ring. The sword is in fine condition with minor blemishes to parts of the hilt and to the blade edge. 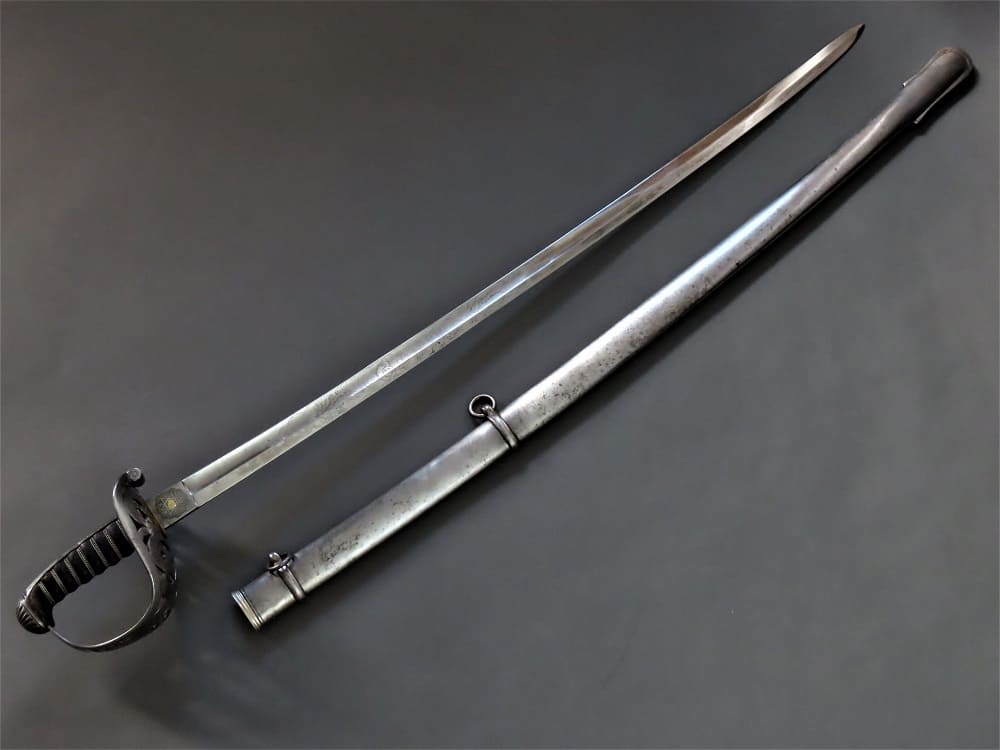 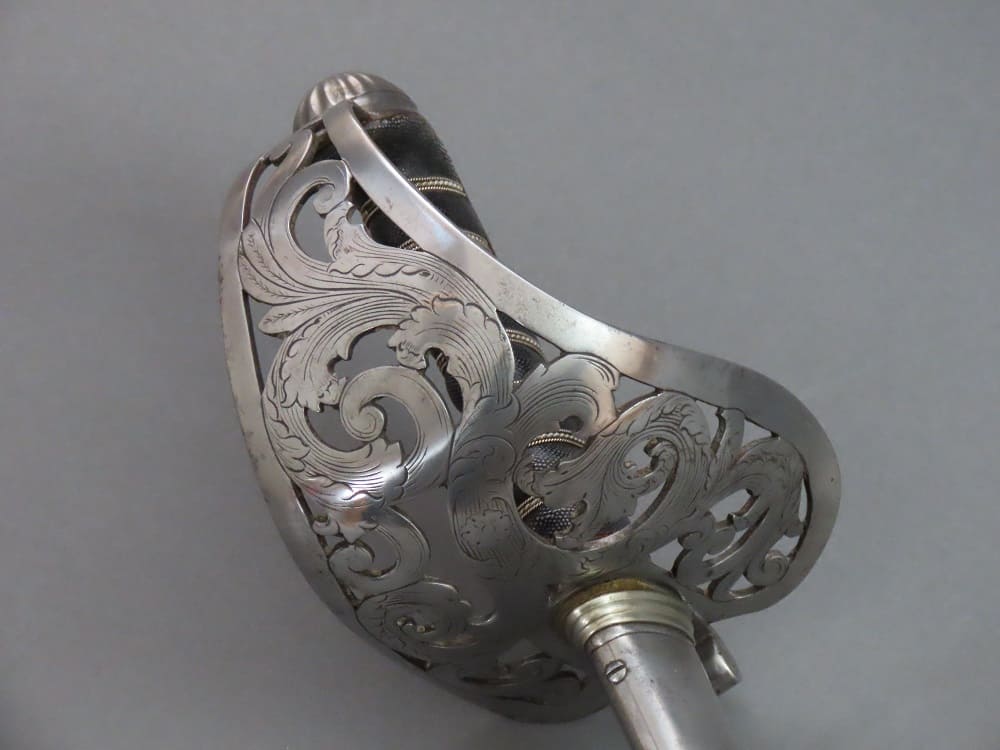 The field service sword is also by Henry Wilkinson punched with the number 6596 for 1855. The slightly curved fullered blade is 32.25 inches (82 cm) long and contained in its steel scabbard also punched with the same number. The forte is marked same as the basket hilted sword with “HENRY WILKINSON, PALL MALL, LONDON” and with a star and brass roundel punched with HW in raised relief on the reverse side. On one side within a panel of etched thistles is the “VR” cypher with crown above and “HIGHLAND” with a bugle below with the number 71 inside its loop then “LT INFANTRY” below. On the reverse side between panels of thistles the battle honours of the regiment are detailed within a scroll design beginning with “PENINSULA” and “WATERLOO” then ending with  “HINDOOSTAN”. The blade retains most of its original finish. 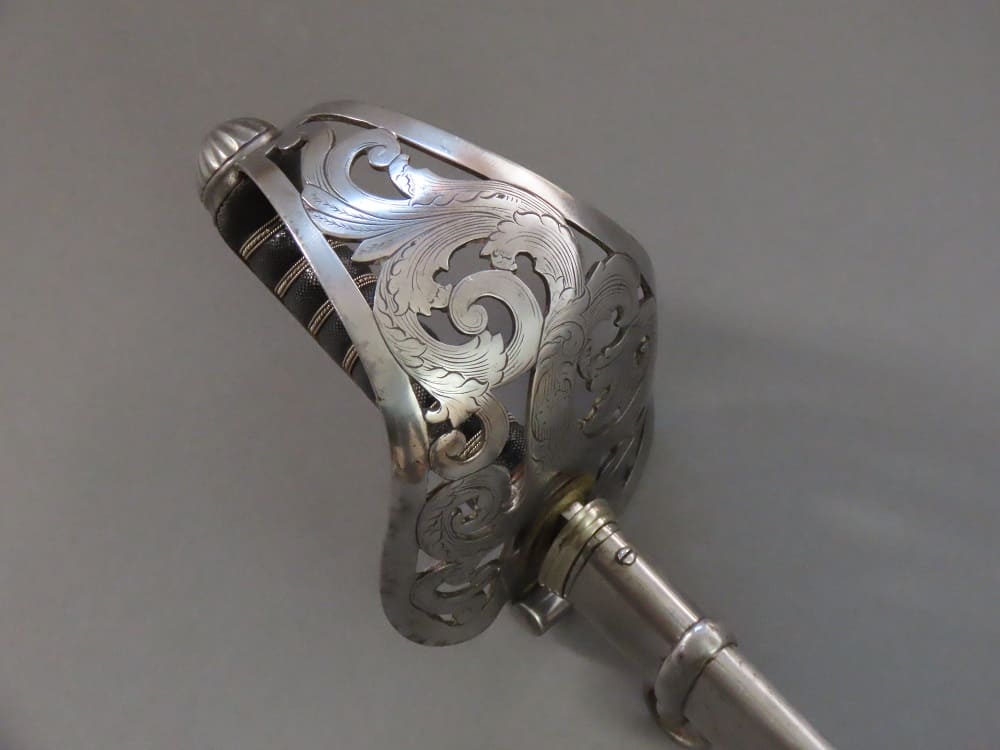 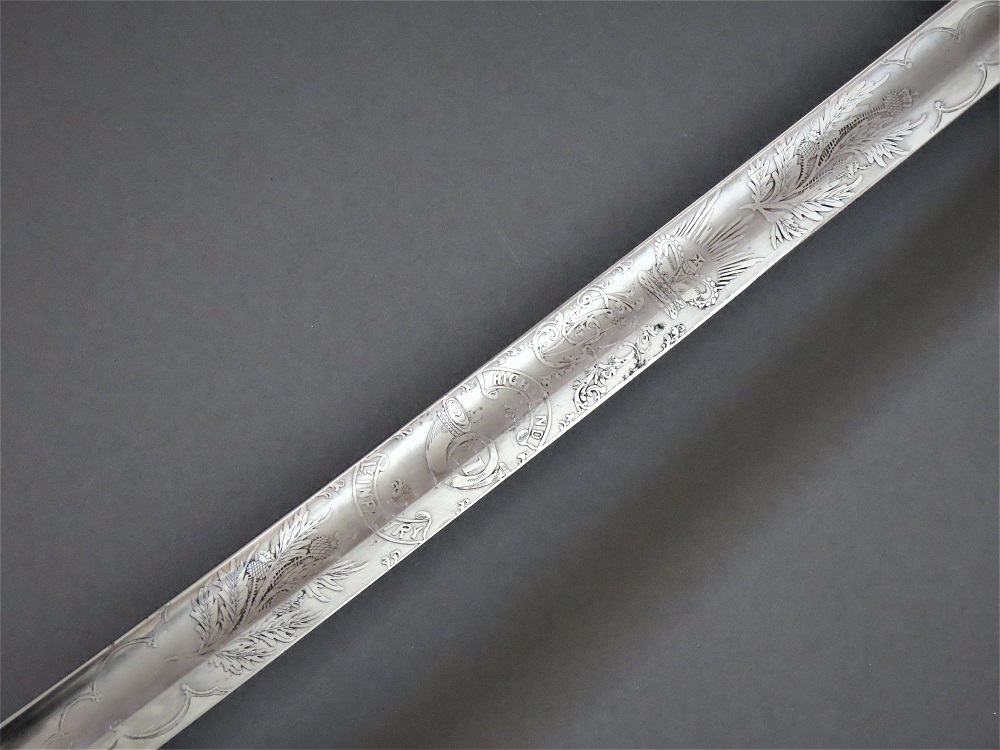 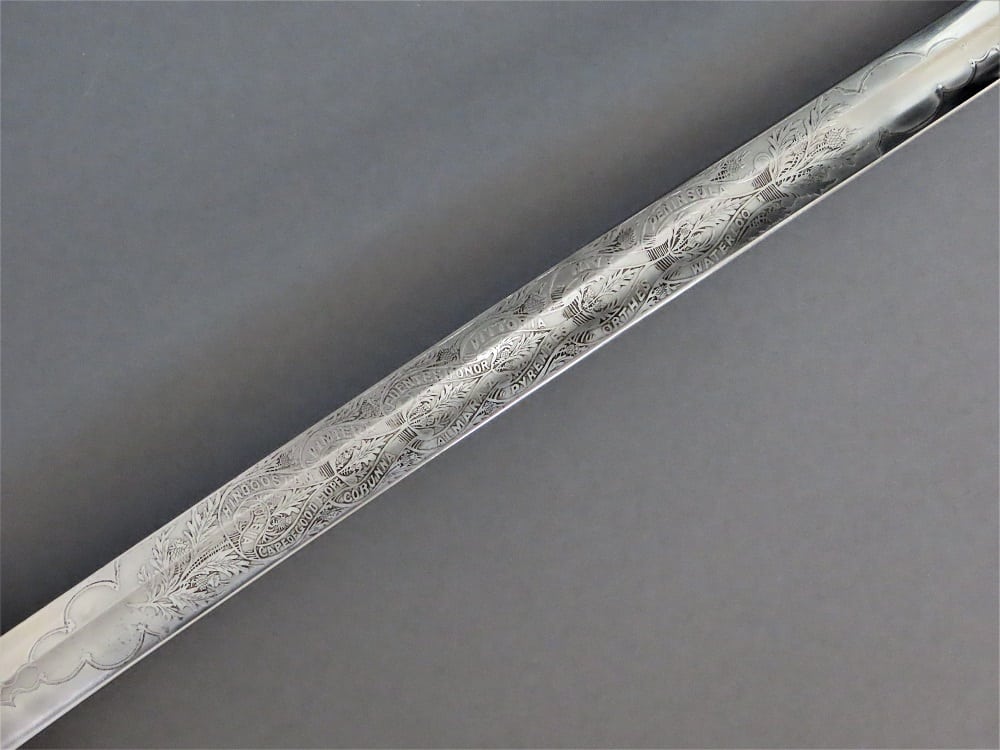 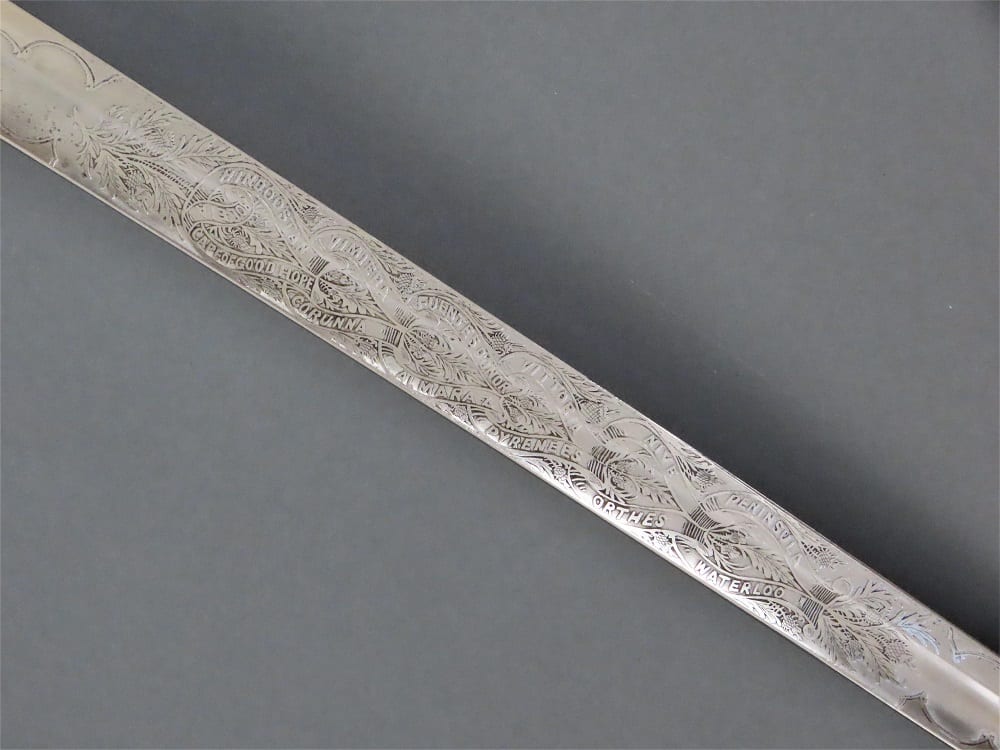 The dress dirk is of fine quality and of robust size mounted with ebony grip and gilt deeply chased brass mounts. The leaf shaped blade measures just over 13 inches (just over 33 cm) and the dirk 19 inches overall length (just over 48 cm). It measures just under 20.5 inches (52 cm) when measured end to end in its scabbard. The baluster shaped dirk grip is cut with a Scottish military bonnet and crossed swords between the haunches to the front and with a thistle on the reverse in raised relief. The middle section is cut with a decorative basket weave pattern mounted with gilt brass studs at the intersections at the front and with ridges of longitudinal lines to the rear which extend upwards to the back of the canted pommel. The pommel band and mouthpiece are of cast brass with a flowing band of thistles and leaves in raised relief. 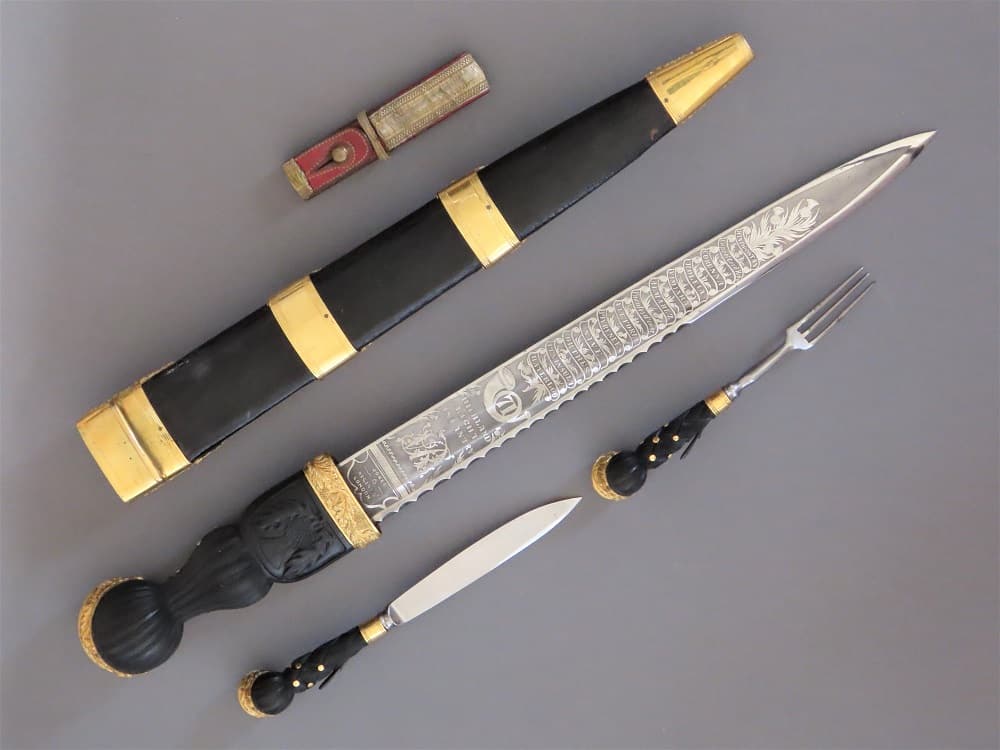 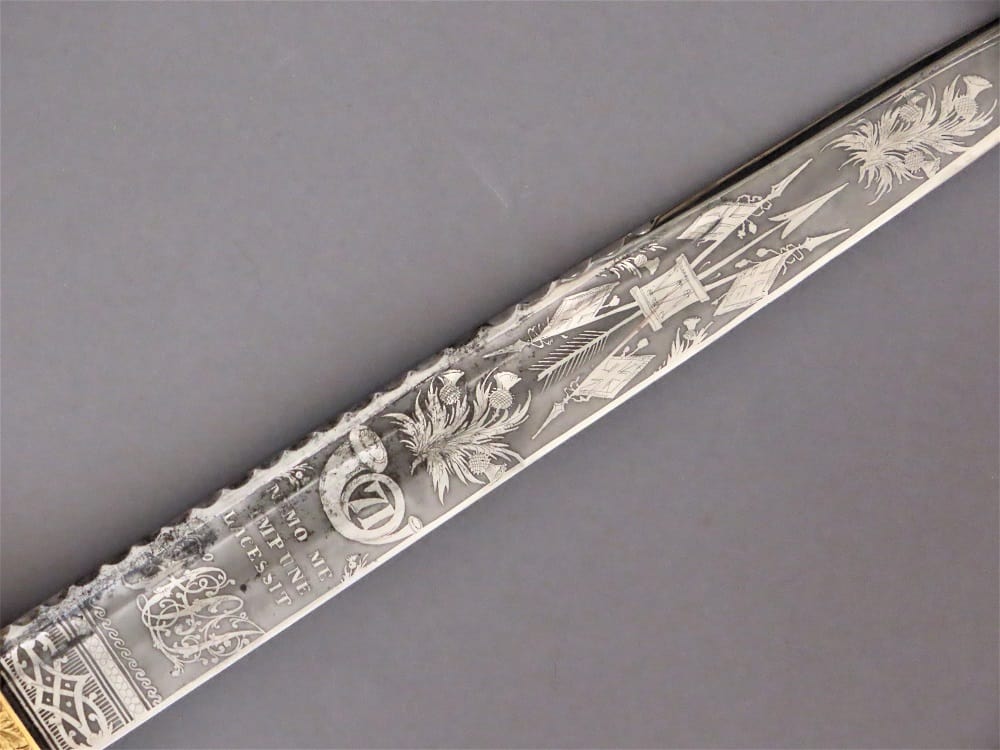 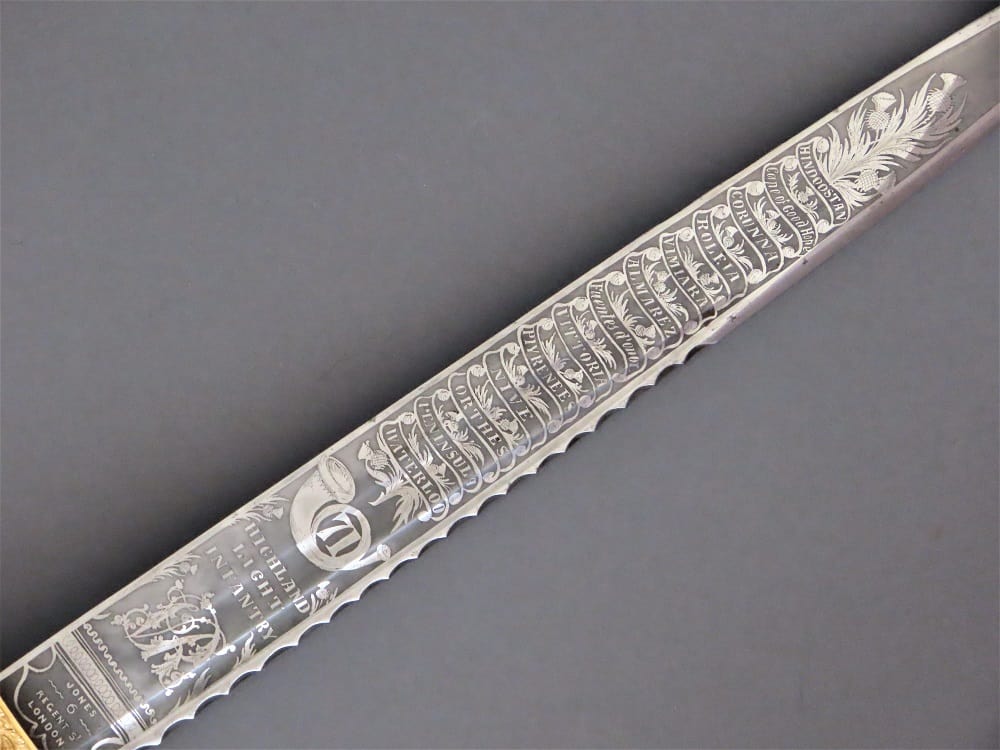 The Viewed from the hilt towards the tip on one side, the blade is etched with a panel of bordered interlace above which in floral script are the letters “HLI” for the Highland Light Infantry. Above this the regimental motto “NEMO ME IMPUNE LACASSET” is clear. The next etched design is a bugle with “71” inside its loop with a thistle above, followed by a stand of arms and a further thistle beyond.

On the reverse side the first panel contains the name of the retailer / maker “JONES, 6 REGENT ST, LONDON” with the “VR” cypher above in the same script as the “HLI” script on the first side. Above this, where the motto is place on the first side is “HIGHLAND LIGHT INFANTRY” with the bugle and “71” inside its loop. Along the rest of the blade the battle honours on the field service sword are repeated in a panel beginning with “WATERLOO” and ending with “HINDOOSTAN” with a thistle above. The dirk is in fine condition retaining most of its original finish other than one insignificant patch of old rust on the main dirk blade near the grip on one side. The dirk retains its braid suspension strap.

A shoulder-belt plate for an officer of the 71st is also accommodated in the case. This has a copper-gilt stippled ground with the silver applied regimental device of 71 within a bugle loop. It retains its hook, stud fittings on the reverse with its original leather backing.