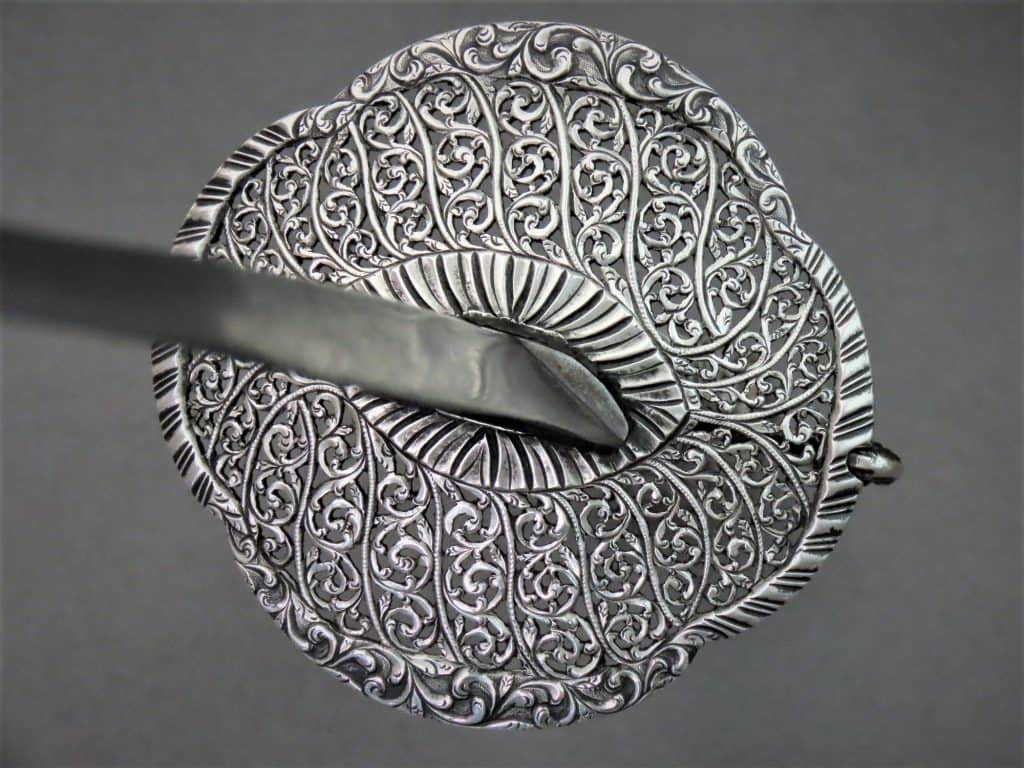 An exceptional smallsword by the renowned 18th century London silversmith and cutler William Kinman, date-stamped for 1764 / 1765. The hallmarks are of small type stamped into the Pas D’Ane rings and consist of the maker’s mark of “W K” in raised relief inside a depressed irregular panel with a pellet between the letters, with the lion passant mark, crowned leopard’s head assay mark and date stamps alongside.

Examples of Kinman’s work represent the highest standards of English silver craftsmanship of the time as is to be seen in the hilt of this sword. The dish guard, pommel and ricasso are pierced and engraved with exquisitely detailed foliate scrolls formed within diagonally spaced panels, the sides of which emulate waving tendrils. The delicacy of the interior of the dish is supported by a strengthening of the rim which is decorated with floral designs front and back with gadrooned engraving to the sides which is repeated on the knuckle bow and on the quillons. The baluster shaped wooden grip is diagonally bound with silver strip interspaced with a double length of plain wire with thinner twists on each side mounted with silver cap terminals top and bottom engraved with floral designs.

The hilt is as much an example of the high standards of design and execution required of the 18th century London silversmith and cutler as it is of an effective weapon. Silver hilted small swords were fashionable attire for 18th century gentlemen. Mostly worn for effect, someone wearing such a sword was also announcing to the world that he could use it. Despite the stylish and delicate appearance of these swords they were formidable dueling weapons.

The triangular section, stiff, hollow ground, colichemarde blade has a grey  uncleaned patina all over. Originally it was lightly and crisply engraved at the forte with patterns of scrolls and foliage inside panels and beyond on each of the three faces of the blade. These are now a little worn due to the friction of drawing a sheathing the sword in its scabbard over a long period which is now absent.

The sword is in fine condition overall with some light salt and pepper pitting to the blade. There are no losses or repairs to the hilt which has maintained its original pleasing outline. The blade is 30.75 inches (just over 78 cm) long and overall is 37.5 inches (95.25 cm) long.

William Kinman was one of the most influential and foremost makers of silver hilted swords working in London in the third quarter of the 18th century and made swords for the London social and military elites. He was a leading member of the Founders’ Company of London and served in all the major offices of the guild including Master. He was born in 1728 and was sworn free of the Founders’ Company in 1750, when presumably he started to make silver hilted swords under his own name and was admitted to livery in 1757. He entered his first mark at Goldsmiths’ Hall in 1759 (Grimwade 1990 reference 3210) which is Kinman’s mark on this sword. William Kinman was at his most prominent in the early part of his career, when this sword was made, later becoming bankrupt due to the failure of a founding business he was involved in.

For similar swords by William Kinman see “London Silver-hilted Swords” by Leslie Southwick, Royal Armouries, 2001, and for further information on his working life of see pages 159 and 160.