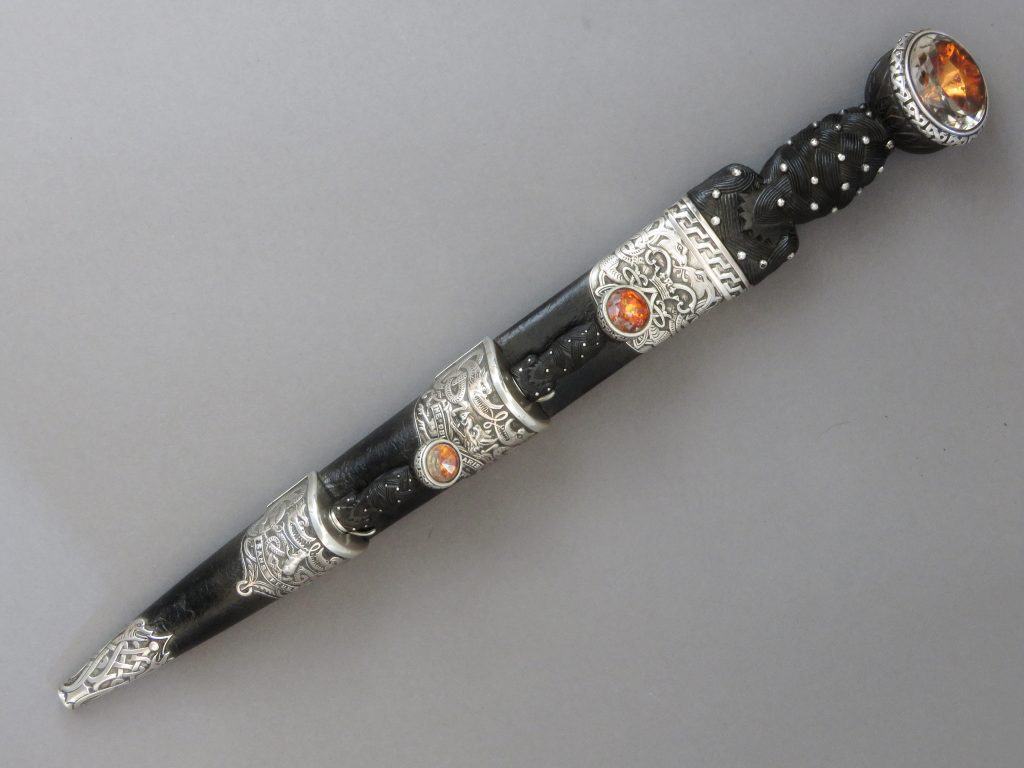 A very fine officers’ silver mounted dirk made by Marshall & Sons of Edinburgh hallmarked for 1885/86 and retailed by Johns & Pegg of London. The dirk dates to the first few years following the widespread reforms to the British Infantry implemented by the Secretary of State for War Hugh Childers in 1881 when the 91st Argyllshire Highlanders and the 93rd Sutherland Highlanders merged to become the Argyll & Sutherland Highlanders. The blade is attractively etched with motifs and overall the dirk with its mounts is in very fine condition. The dirk was most likely carried by an officer serving with the Regiment in the Boer War towards the end of the 19th century.

The dirk, by-knife and by-fork grips are made from black hardwood finely carved with a basket weave pattern of interlace with silver studs at the intersections. The haunches of the dirk and furniture are pronounced as was the style for A&SH Officers’dirks at this time.

The pommels are canted forward with mounts formed as silver bands decorated with Celtic patterns and topped with finely cut transparent multi-faceted orange backed citrines. The dirk grip has a base ferrule decorated with further Celtic design and the by-knife and by-fork bases are mounted with plain cones of silver with silver plated sprung clips.

The dirk is housed in a wooden scabbard covered with black leather. The mouthpiece to the front is mounted with a crown and “VR” monogram with serpents above with their heads facing each other above the crown with scrolls beneath and to the sides. The bi-knife scabbard mount has serpents heads facing each other, with their long bodies curled as Celtic knots, over a boar’s head with the first part of the Regimental Motto “NE OBLIVISCARIS” (Do not forget) underneath with boar’s legs and feet beneath. The by-fork scabbard mount has similar serpents facing each other over a cat with the second part of the Regimental Motto “SANS PEUR” (Without fear) underneath. The chape is decorated with two further heads of beasts facing each other with Celtic scrolls between. The dirk fits neatly into the scabbard with the base ferrule fitting neatly over the top of the scabbard mouthpiece. The by-knife and by-fork fit snugly into their pockets.

The single edged tapering blade is scalloped along its back for over half its length and is formed with double fuller either side. The upper fuller nearest the spine being narrower and deeper than the shallow broad fuller beneath. The by-knife blade is also single-edged and also has a scalloped blunt back edge. The blade is just under 12 inches (30 cm) long and overall the length of the dirk in its scabbard is 17.25 inches (44 cm).

The blade is finely etched with Regimental Motifs. At the front from the base a panel of thistles is present above which is a boar’s head with “NE OBLIVISCARIS” underneath. Above this is a “VR” cipher with a splendrous crown above. Beyond this further scrolls continue to the tip. On the reverse side, the name of the retailer, “JOHNS & PEGG, CLIFFORD ST, LONDON.W” is clearly etched near the hilt. The etched design above this is same as the on the first side except the second part of the Regimental Motto, a cat with “SANS PEUR” beneath, replaces the boar.

Each of the four silver scabbard mounts is stamped on the back with the Scottish Thistle, Edinburgh Castle Town mark and the Date Stamp shown in descending order from the mouthpiece to the chape in the photographs below. The back of the mouthpiece is additionally stamped with the makers mark “M&S” in raised relief inside a panel. Marshall & Sons are recorded as silversmiths in Edinburgh between 1835 and 1890. The London retailer, JOHNS & PEGG”, is still today one of London’s foremost formal tailors on Savile Row in London and supplies a worldwide market.