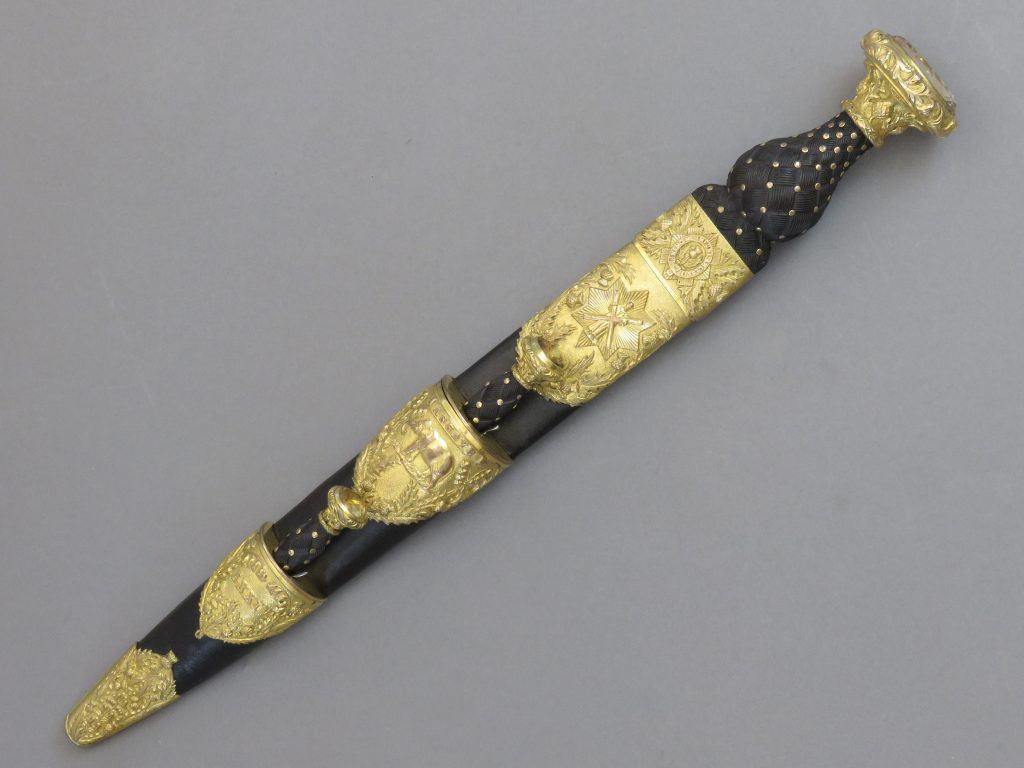 An imposing Officer’s dirk of the 74th (Highland) Regiment of Foot dating to before the widespread reforms to the British Infantry implemented by the Secretary of State for War Hugh Childers in 1881. As part of these reforms the 74th (Highland) Regiment amalgamated with the 71st (Highland) Regiment to become the  Highland Light Infantry with the 74th forming the 2nd Battalion. The dirk mounts are of gilt bronze and it was retailed by Hamburger Rogers & Co of King Street, Covent Garden, London. The business began in 1794 and adopted this name in 1839 to supply military uniforms  and accessories and prospered into the 20th century.

The single-edged blade is just under a foot long (30 cm) and has a blunt back edge extending 8 inches (20 cm) from the base of the grip which is scalloped for most of its length after which it is double edged to the tip. A single pronounced fuller runs underneath the blunt back edge with a broader, shallower fuller running beneath along the middle of the blade.

The blade is sumptuously etched and engraved on both sides. One side has the name of the retailer near the grip with a stand of Scottish arms above this. The rest of the blade is taken up with the battle honours of the regiment in scrolling script beginning with the Sieges of Seringapatam in India in 1792 / 1799 and ending with the Peninsular Campaign of the Napoleonic Period and the Battle for Toulouse in 1814.

The reverse side has patterns of scrolls along the blade interspersed with various features. Near the grip “LXXIV” signifies the Regimental number with an elephant above over which “ASSAYE” marks the involvement of the Regiment in the battle of that name in India in 1803. Above this a vacant cartouche is present surrounded by foliage. On top of this the Regimental badge, a circular belt with a thistle inside, on a star surround, is inscribed “NEMO ME IMPUNE LACESSIT (NO ONE PROVOKES ME WITH IMPUNITY)”. This was the Latin motto of the Royal Stuart dynasty of Scotland from at least the reign of James VI when it appeared on the reverse side of merk coins minted in 1578 and 1580. It is still the adopted motto of the Order of the Thistle and of some Scottish regiments of the modern British Army. Further towards the tip is the “VR” cipher represents Queen Victoria with a crown above.

The grips of the dirk, by-knife and fork are baluster shaped and of black hardwood cut with fluted basket weave patterns with brass studs mounted at the intersections. Each piece is mounted with a pommel with bold foliage and thistles in raised relief with yellow backed multi-faceted citrines mounted on top. The by-knife and fork are secured in their pockets with spring steel clips mounted onto each grip on one side. The Regimental badge and motto is applied either side of the base mount of the dirk grip, similar to the badge on the blade, on a background of thistles and foliage.

The scabbard is of wood covered with leather and retains its original suspension bars at the back. The mouthpiece to the front shows St Andrew holding a cross on a background of a star with foliage beneath. The mount for the by-knife pocket shows an Indian Elephant with “ASSAYE” above, as on the blade, with thistles and foliage beneath. On the mount of the by-fork pocket is the Regimental number “74” within a frame of thistles. The chape is finished with further thistle designs.

The dirk is in overall good condition. The bronze mounts retain most of their gilt cover. The blade has small patches of inactive blackened rust and staining in places. The overall length of the dirk in its scabbard is 19 inches (49 cm).