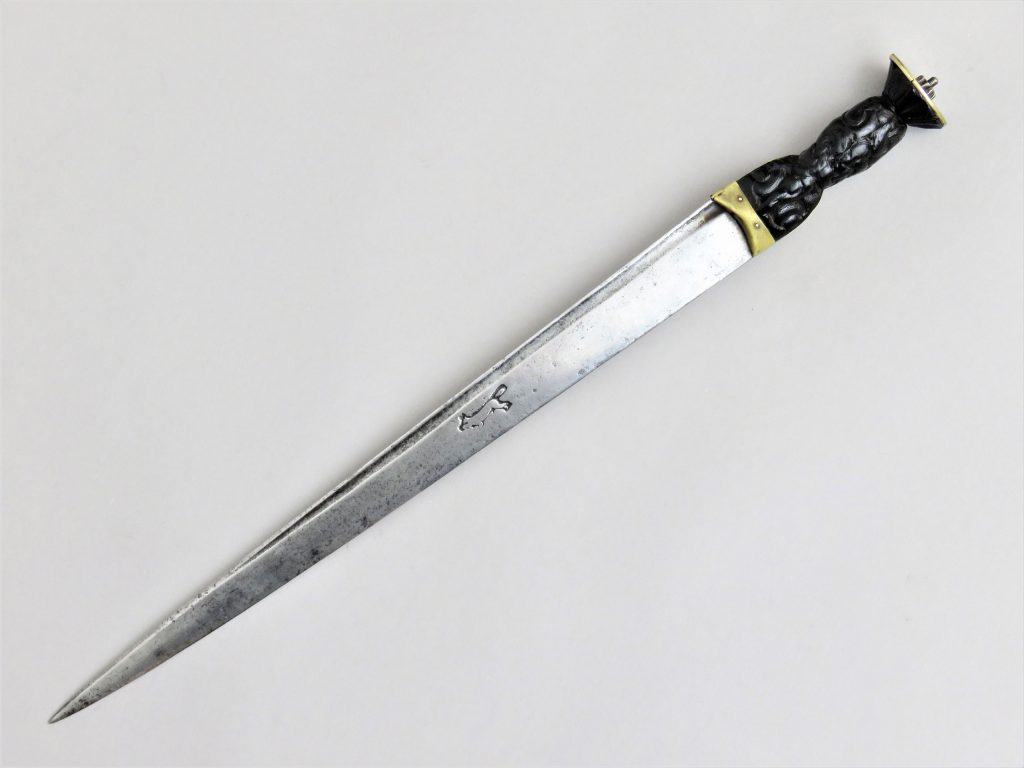 A fine quality and robust Highland Scottish dirk dating to the early 18th century fashioned with a bog oak grip, brass mounts and a cut down back sword blade. The tapering blade has a single fuller and is marked with a running fox on one side probably indicating Shotley Bridge as the place of manufacture. A fine example of a first quarter 18th century Scottish Highland weapon.

The grip has a rich, deep blackened patina and is carved with an early form of grip decoration consisting of four columns of reeded interlaced Celtic ropework. The underside of the pommel is carved with a foliate pattern of arches. The brass pommel cap is engraved with two concentric circles inside which a six point floret radiates from the centre, a pattern which often appears on other traditional contemporary Highland Scottish craft items such as powder horns, targes and plaid brooches. The threaded tang is secured by a thick cruciform shaped nut with shaped edges above which a small length of the threaded tang protrudes.

The dirk has a typical crescent shaped ferrule formed from thinly beaten brass applied to protect the base of the grip into which the shoulders of the blade sit and is secured by two brass pins either side, the head of one now missing. Two strips of brass protect the haunches of the grip base, a thinner one on the cutting edge blade side and a wider one on the back edge haunch corresponding to the thickness of the blade spine. The brass parts display a dull aged patination.

The blade of this dirk is noticeably long compared to contemporary dirks. This may be a reaction to the Disarming Acts introduced to the Scottish Highlands after the 1715 Jacobite Rebellion which forbade the carrying and use of swords by Highlanders in many areas. These Acts were seemingly not so fiercely imposed as those implemented after the failure of the 1745 Rebellion. In the places where they were enforced Highlanders driving cattle and visiting markets in the Lowland towns and boroughs were probably prevented from carrying swords in some places. Hence the creation of a longer dirk may have increased its defensive qualities as a primary  rather than a secondary weapon, where the carrying of a sword was not possible.

Shotley Bridge became an important blademaking centre from 1691 onwards after it was founded by a group of immigrant blade smiths from Solingen and continued to produce blades until the end of the Napoleonic War period in the early 19th century. It is feasible that due to its location in the north east of England near to the Scottish border, that Shotley Bridge provided blades for some traditional Scottish sword makers which when damaged were ground down into dirk blades.