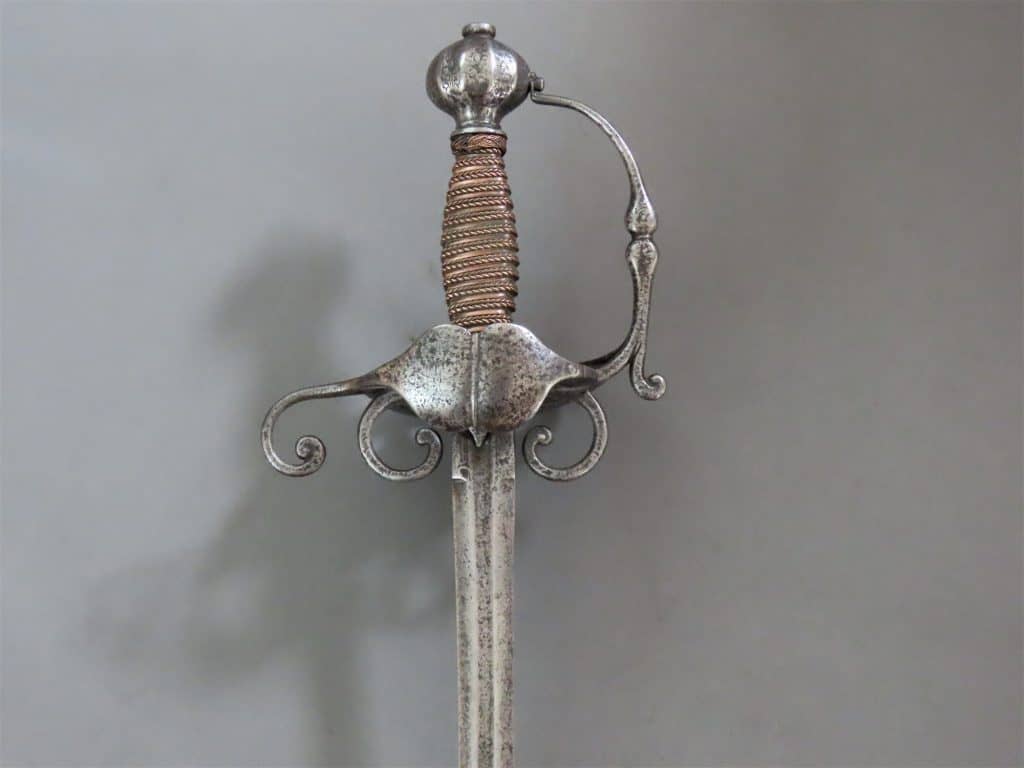 A boldly constructed and attractive rapier of North European type, probably from a Saxon workshop, dating to the first half of the 17th century and the 30 Years War period. The blade is 33.5 inches (85 cm) long and the overall length is 39.25 inches (99.5 cm). These proportions are shorter than those of rapiers made more specifically for duelling and are more dextrous and nimbly suitable for military use. The rapier sits comfortably in hand and is well balanced.

The complex hilt consists of finely wrought bars built upon a cross guard which has a long downwardly curled terminal to the rear, then rises at the front into a curved knuckle bow with a swollen middle bifurcated into two knops and is screwed to the pommel through a flattened angled section at the top. The bow has an unusual downward extension at its base with a curled terminal facing to the front. Beneath the hilt two pas d’ ane rings, also with markedly curled terminals, extend downwards from the cross guard either side of the short pointed langets built from the quillon block.

The outer side guard which protects the outside of the user’s right hand consists of an open ring guard forged onto the cross guard with swollen knops in the middle in similar style to those of the knuckle bow. The inside of this plate is grooved into which a downwardly convex plate has been pressed. The outside of this is chiselled with a perimeter hem inside which a spray of leaf shapes radiates from the block divided by lines with the feature accentuated by pierced divides between the leaves where their terminals join the hem. The inner guard is formed from an open ring guard with a pronounced flattened middle which emulates the knop shapes present on the outer guard ring and knuckle bow, separated by an incised ridge.

Of slightly oval cross-section the vertically faceted globular pommel has a waisted integral button on top and a pronounced ribbed neck beneath. The hardwood baluster-shaped rectangular sectioned grip is bound with alternately spaced ribbon and contra-twisted twisted roped lengths of copper wire and mounted with copper “Turks’ Heads” top and bottom.

The fine quality tapering lenticular section double-edged blade is of stiff construction made for cutting as well as thrusting. It has a pronounced ricasso and a deep central fuller which extends for just under a third of the blade length from the hilt. The fuller each side is marked with bladesmith’s stamp of the capital letters: S A H A G U N flanked by concentric oval shapes.

The iron parts of the hilt are covered with the worn remains of what was once an impressively engraved surface of floral and foliate designs. In general, the rapier is a good example of the early 17th century armourer’s craft with attractive flowing curves to the hilt which complement the strength of its construction. The surface condition is homogeneous across the main iron and steel parts with a blackened lightly pitted veneer overall.