After the Restoration of the monarchy in England in 1660 firearms increased in popularity with people at all levels of society. They were  increasingly in demand with entities that needed to protect themselves from robbery such as coaching companies. In day to day life firearms were often carried by people for personal protection when at home and abroad.

After the more sombre and restrictive years of the preceding decades social developments moved towards higher quality and greater expense for those that could afford it in almost all consumer areas including dress, domestic silverware, furniture etc often influenced by “continental” styles. With the high levels of military demand seen in the Civil War periods abated, gunmakers similarly turned their attention to making tasteful and attractive weapons that were not only functional but reflected the wealth and status of owners more than previously. This exceptional Musketoon was made by William Palmer and its fine quality reflects this trend. 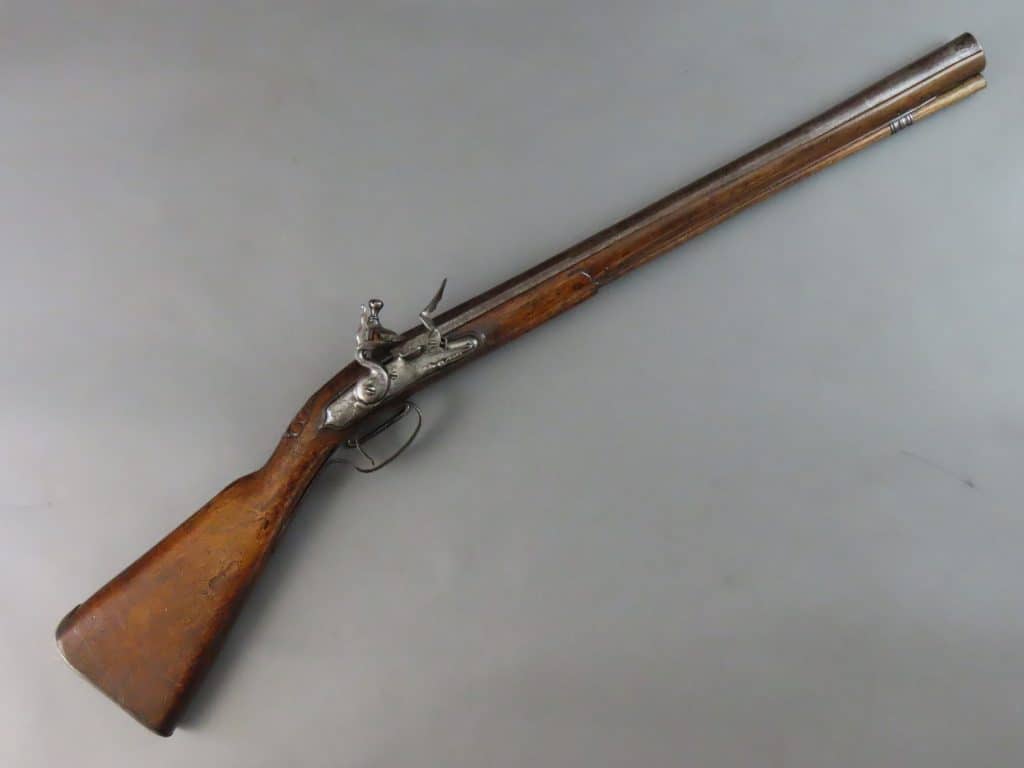 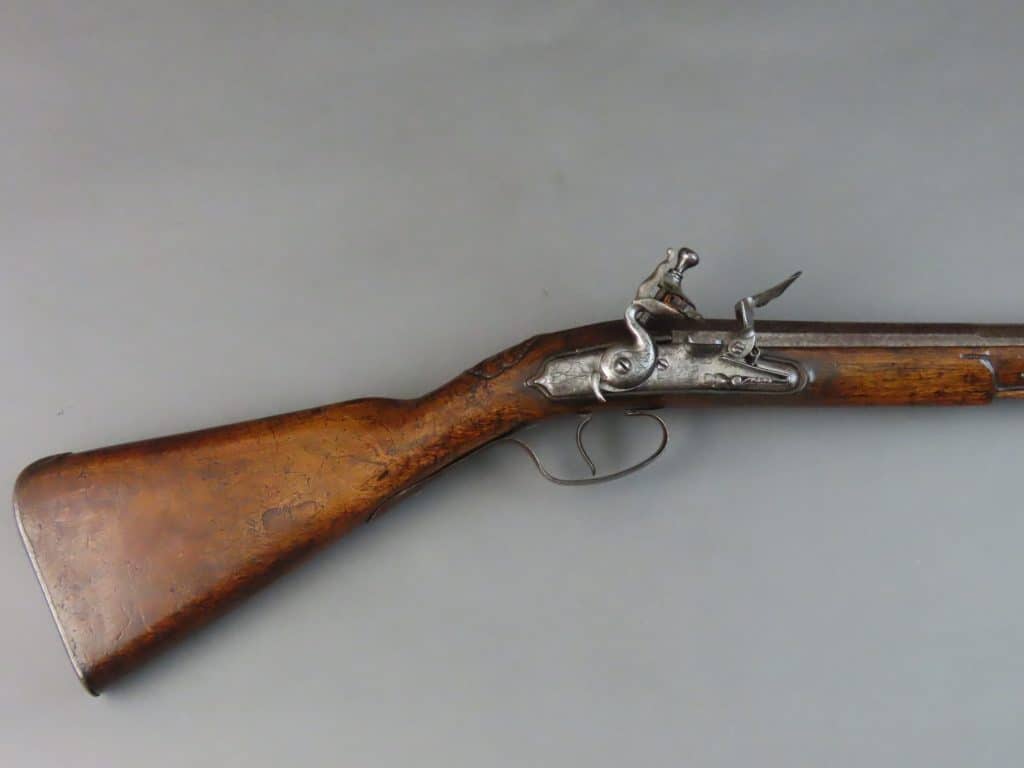 William Palmer was an influential and important gunmaker, who together with a group of other London gunmakers emerged from the austere Civil War and Commonwealth eras into a more liberal environment after the Restoration and fuelled the development of high standard gunmaking in London. A Musketoon in its simplest term is a long blunderbuss approaching carbine length. They were used in both military and civilian environments. The extra length of the barrel enabled a tighter shot pattern and higher velocity thereby increasing its range and impact compared to the usual 17th century blunderbusses of shorter length. English Musketoons of the Restoration period are very rare. 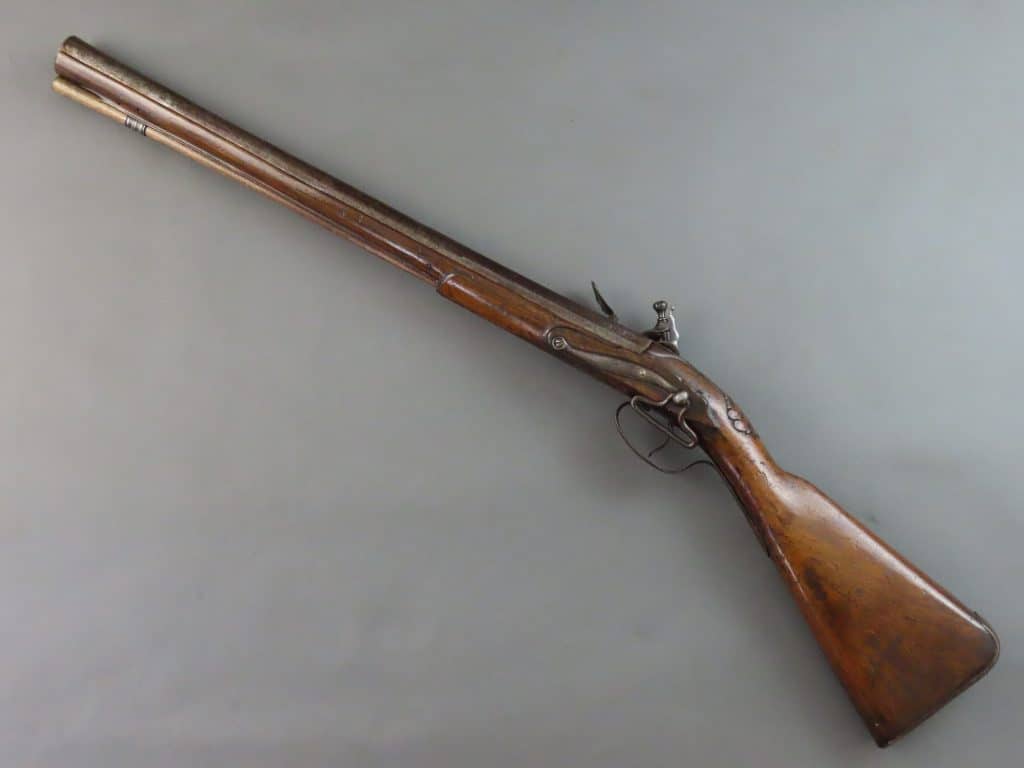 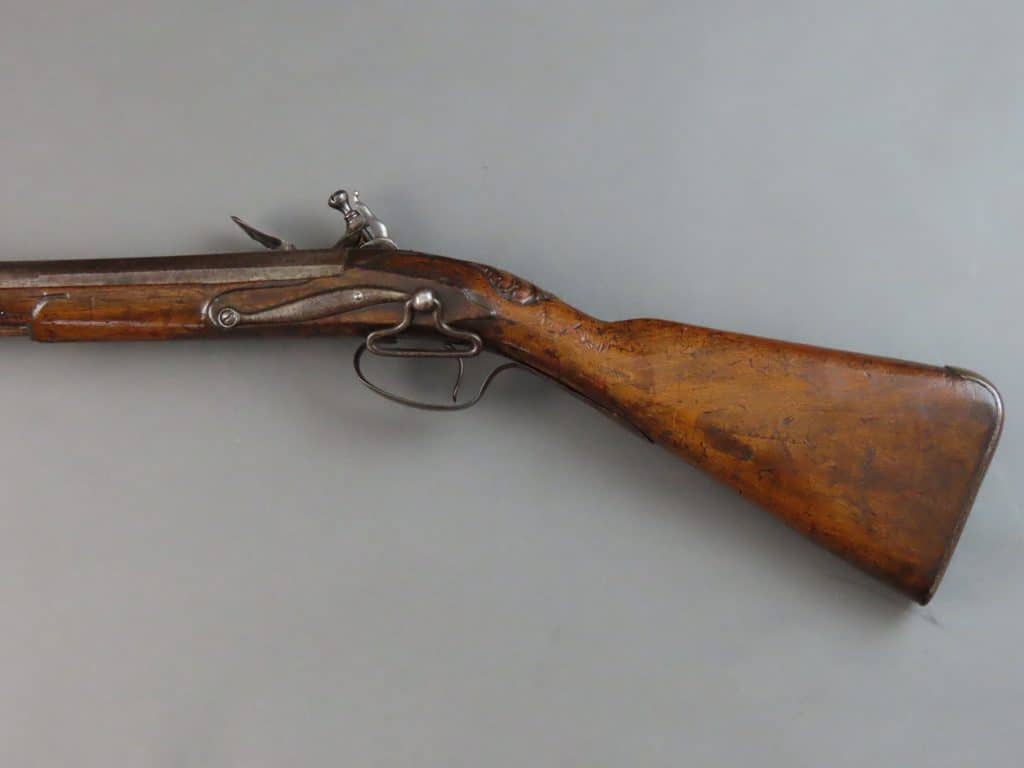 William Palmer completed his apprenticeship (1) towards the end of the Protectorate period in England which came to an end in 1659 a year before the monarchy was restored under Charles II in 1660. He was made free of the Gunmakers’ Company in 1657 to which he was elected Assistant in 1658 and Master in 1669. Evidently by virtue of these appointments he was a man of high standing in the new regime. Alongside some other London gunmakers Palmer was a contractor to the Board of Ordnance from 1661 to 1680 and the Hudson’s Bay Company from 1674 until his death in 1681. Palmer had a son, also called William, and a successful gunmaker, who followed in his father’s footsteps. He was made free of the Gunmakers’ Company in 1677 and also supplied guns to the Ordnance for two years, probably working alongside his father, then disappears from the records and died sometime before 1691. For reasons outlined below this Musketoon is thought to have been made by the first William Palmer. 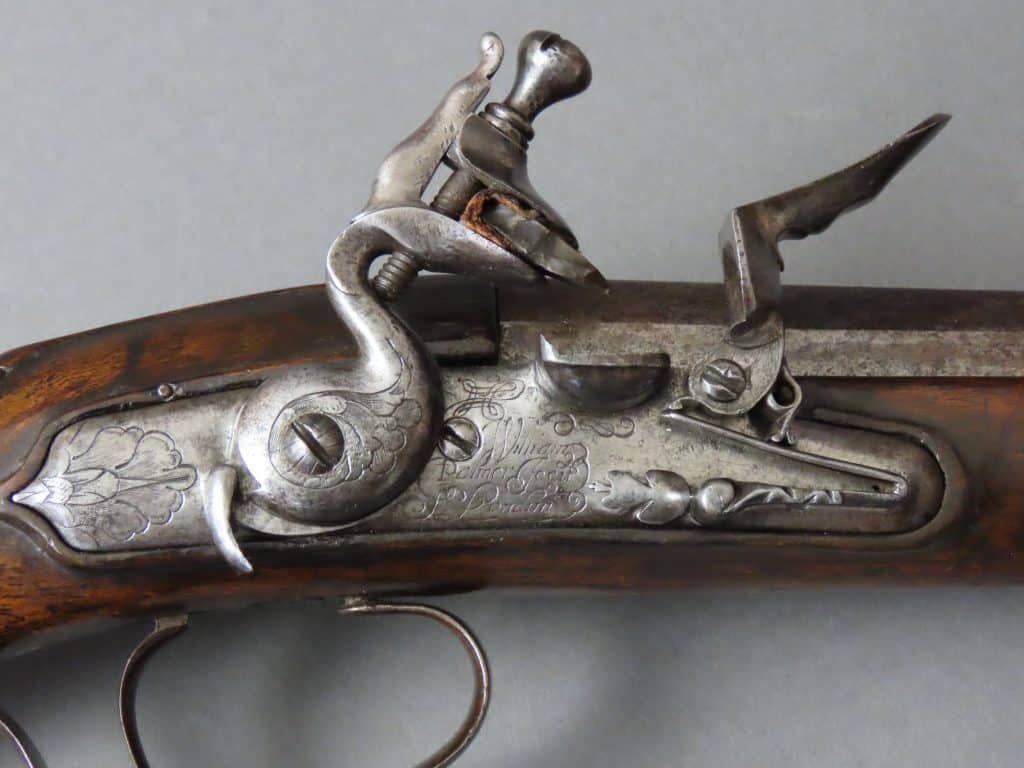 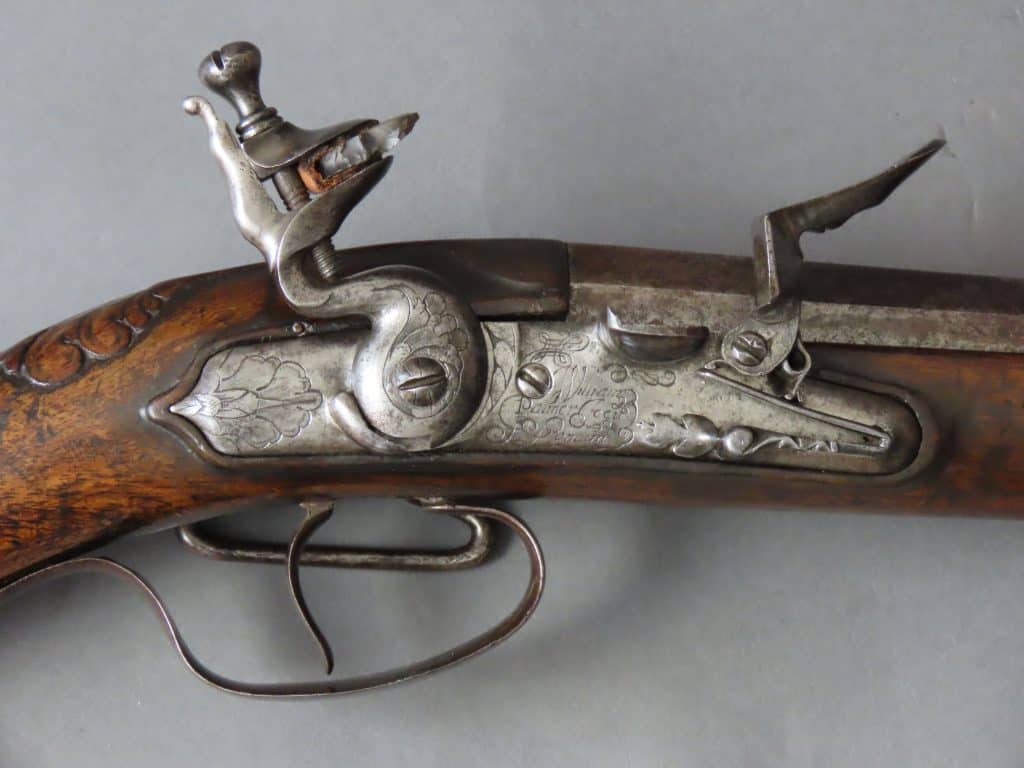 The Musketoon is mounted with a flared iron barrel stamped on the off-side at the breech with the Proof and View marks of the London Gun Company. The barrel is fixed at the breech with an iron tang through which the end of a screw which enters the stock near the trigger below protrudes to secure the barrel into the stock. The barrel is of octagonal section for a few inches from the breech, then becomes 16 sided for short distance which terminates in a waistline at the narrowest part of the barrel, after which it is of rounded section gently swelling towards the muzzle. 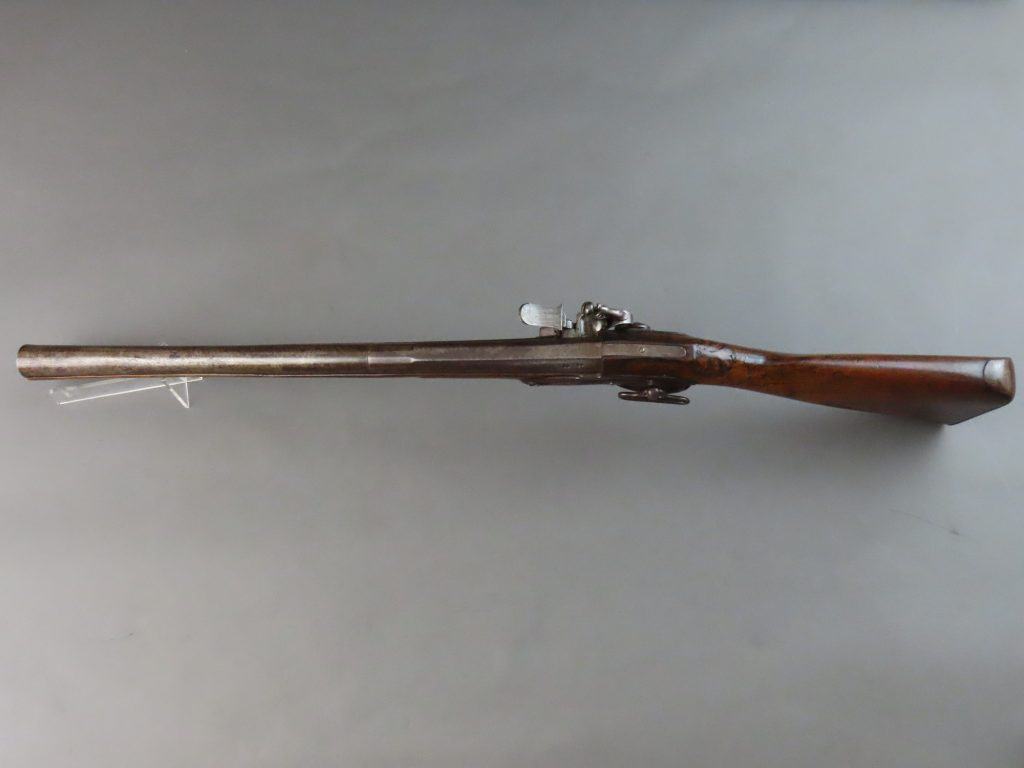 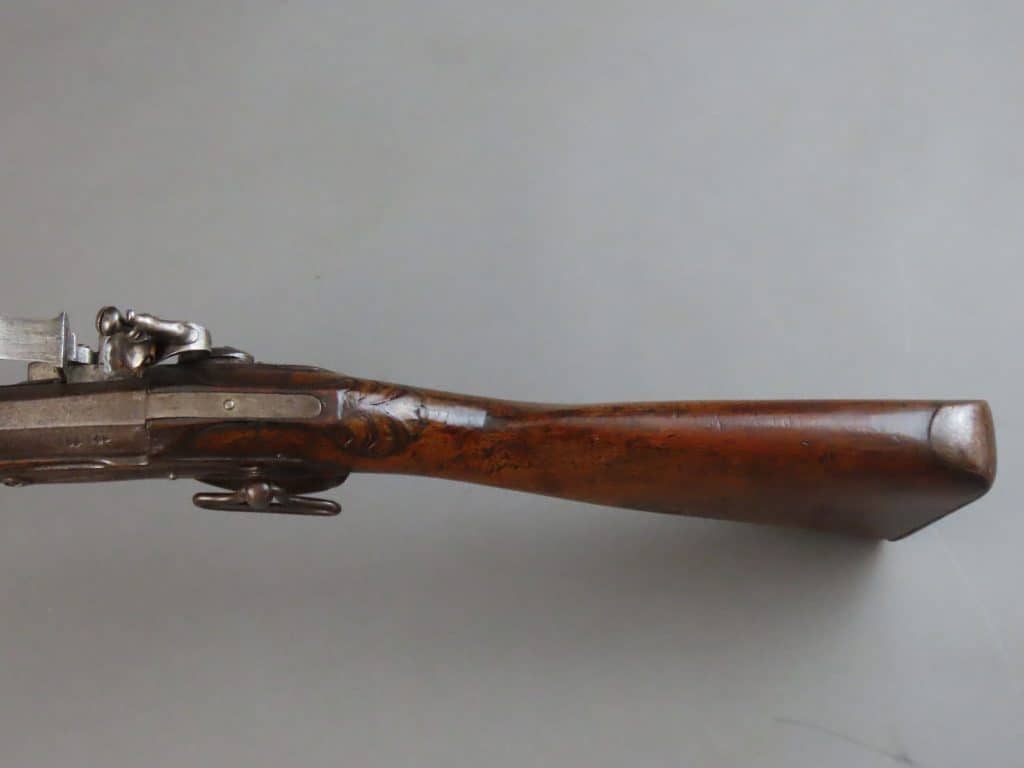 The Musketoon is mounted with a ”Type 2” English lock, a development from the earlier type of lock, in that the dog catch, which holds the cock in the half cock position until released is reduced in size. This type is also often referred to as a lock with a “vestigial” dog catch. It was produced from the 1640s to the early 1680s. The lockplate is of rounded section with a pinched-in tail which forms a pointed finial. This feature is not unusual on other English guns of the Restoration Period. 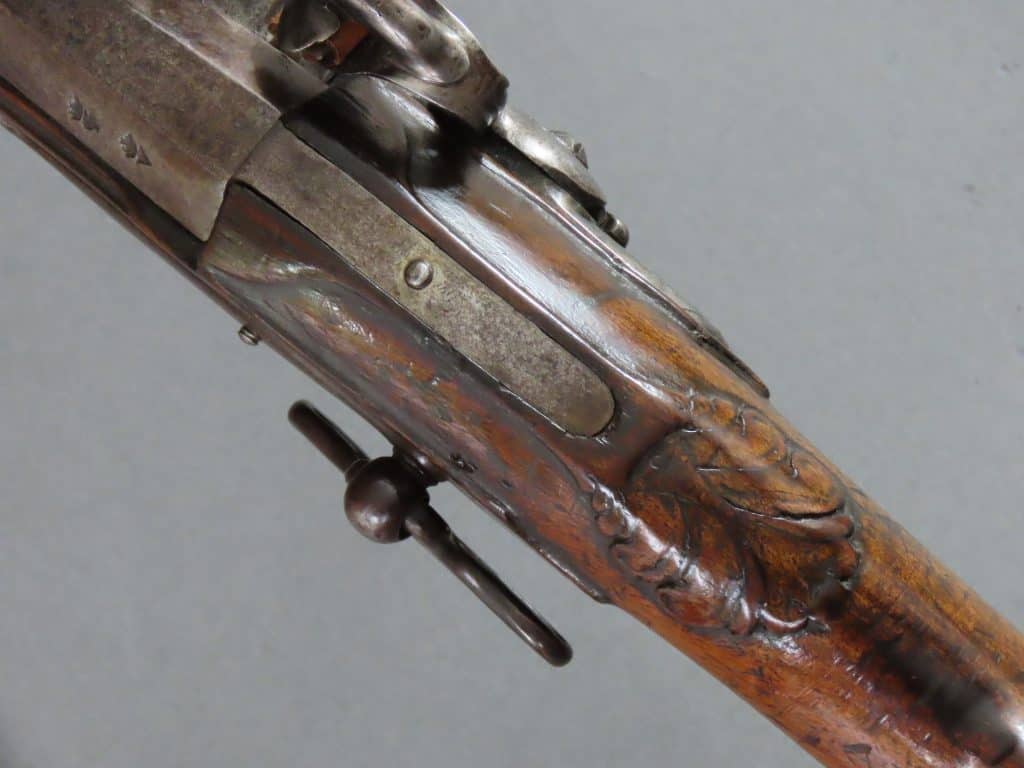 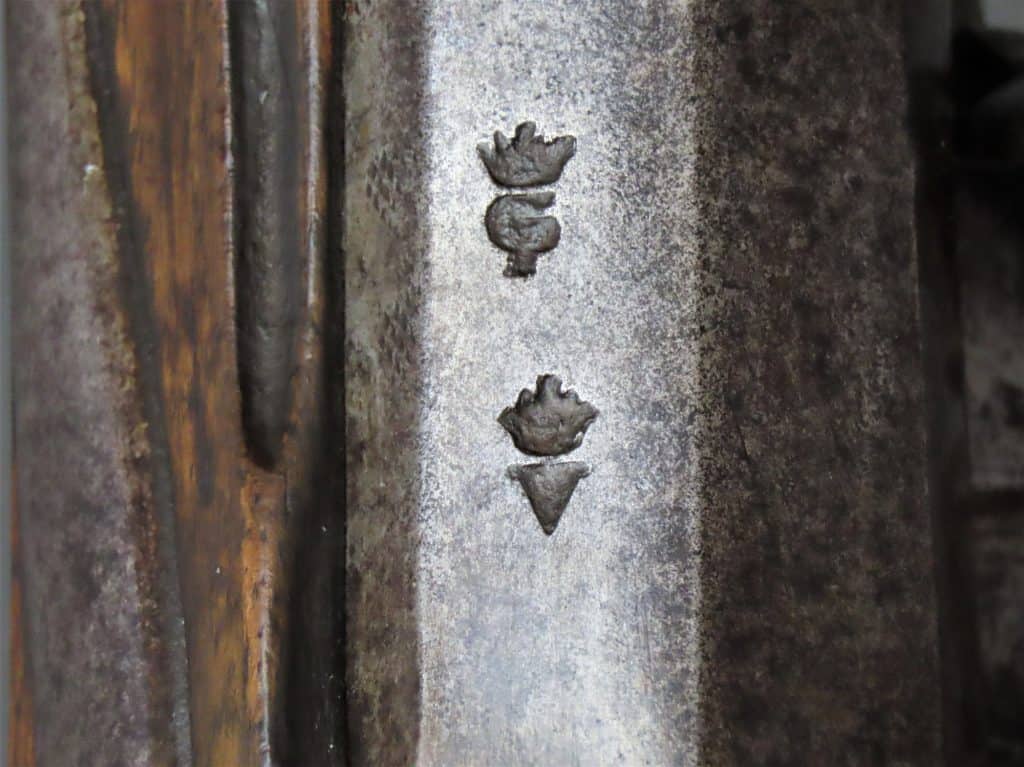 The lock sits in the stock in a moulded surround. The rounded side plate on the off-side opposite the lock, secures the lock through two oppositely directed screws whilst a third provides a swivel head which secures the iron suspension loop for a lanyard. The side plate sits on a raised flattened area shaped in emulation of the shape of the lockplate. The cock and lockplate are engraved with foliage and scrolls in the typical English manner. The maker’s name is finely engraved in front of the cock on the lockplate “William Palmer fecit Londun” framed by scrolls. 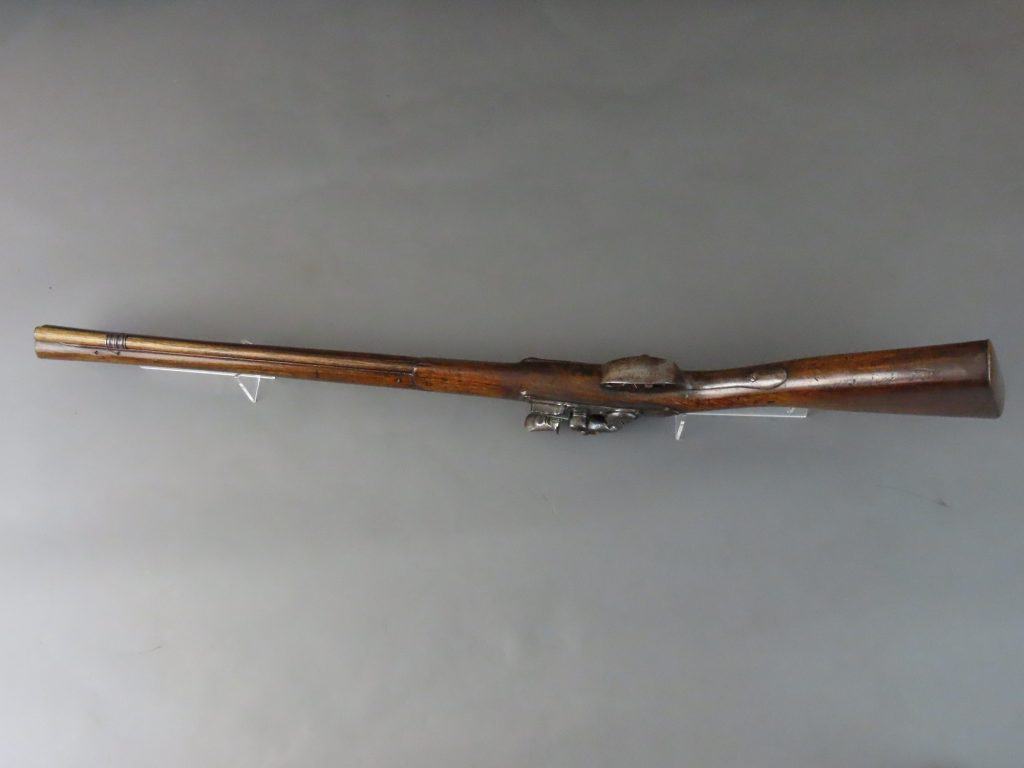 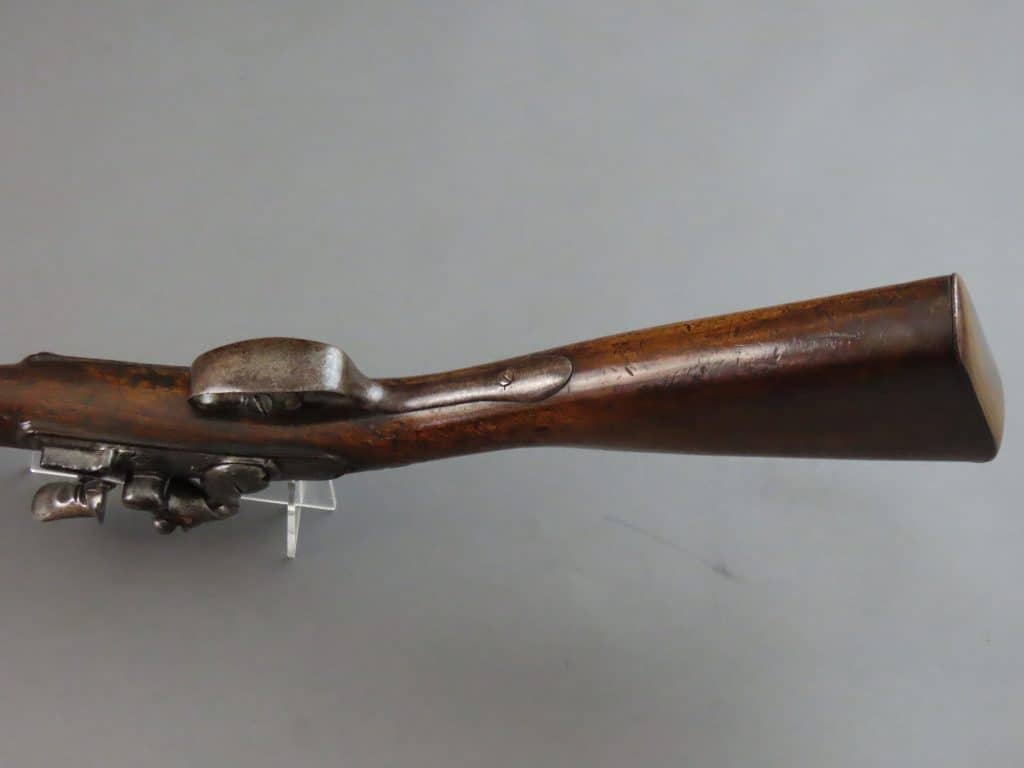 The figured walnut stock is carved with a raised apron around the barrel tang shaped as a fern. The iron butt plate is secured to the stock with flattened iron tacks almost invisibly flattened flush with the surface of the plate. The tapering wooden ramrod is mounted with a thin iron cap and is secured to the stock inside a single ribbed ramrod pipe and the tail tube bored into the stock. The trigger guard is of iron underneath which the head of the screw which secures the barrel tang to the stock on top is visible in front of the trigger in the early manner . The trigger is slightly curved and curls backwards slightly at the tip. 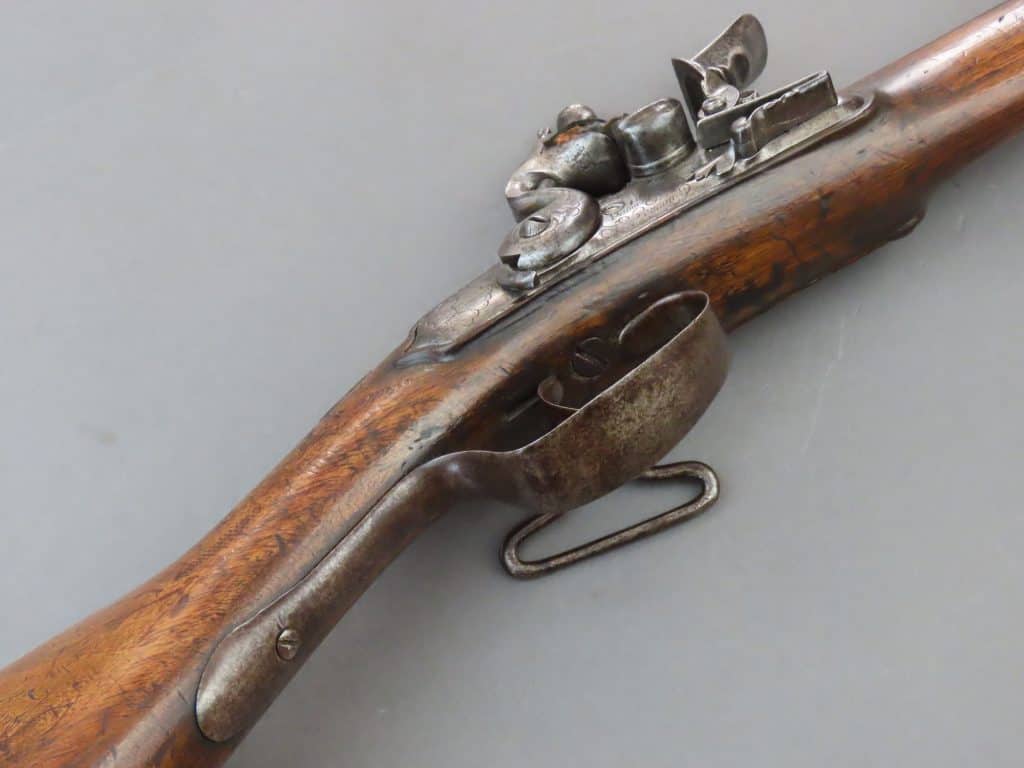 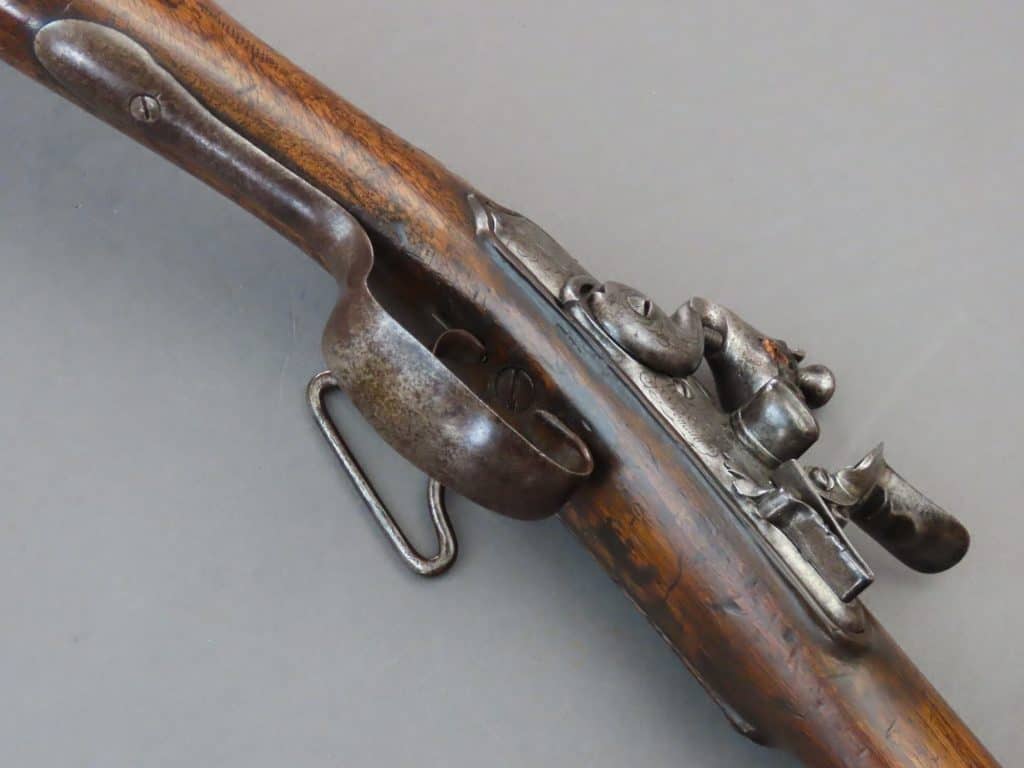 The angle of the wrist of this weapon appears more acute than usual because of the non-vertical angle of the butt plate and narrower stature of the butt which causes a more pronounced slope on top. Too few Musketoons of this age known for comparison but the same feature and visual effect is present in some English Civil War period muskets (2) indicating that the feature on this Musketoon dates to the earlier part of the Restoration period. 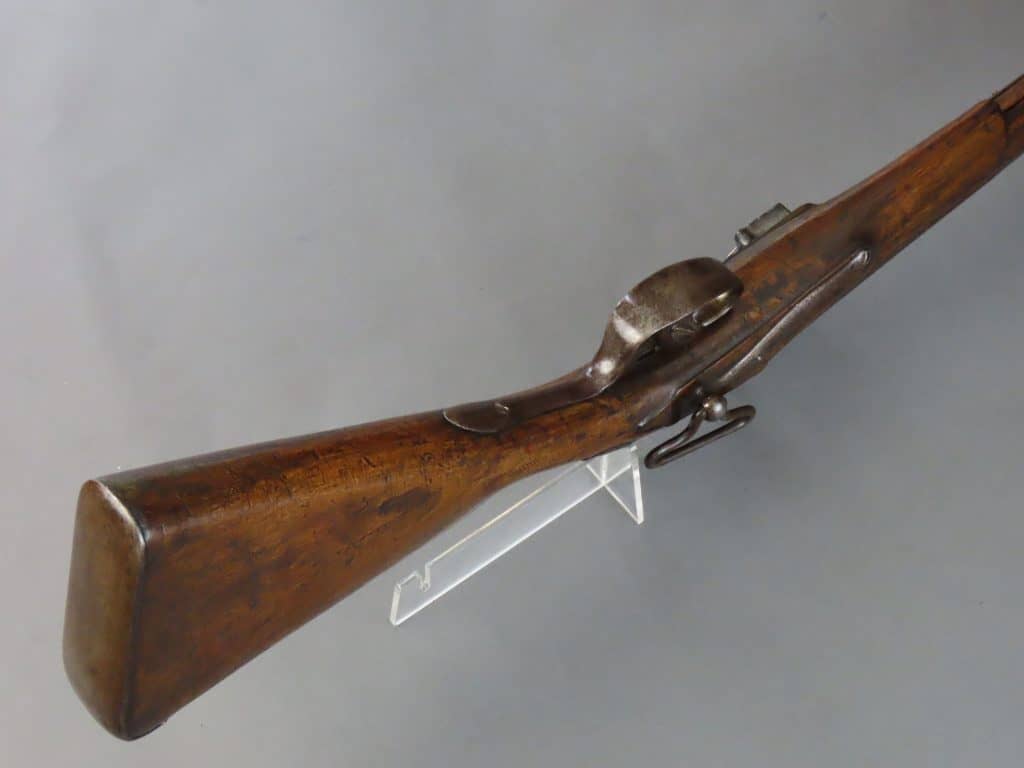 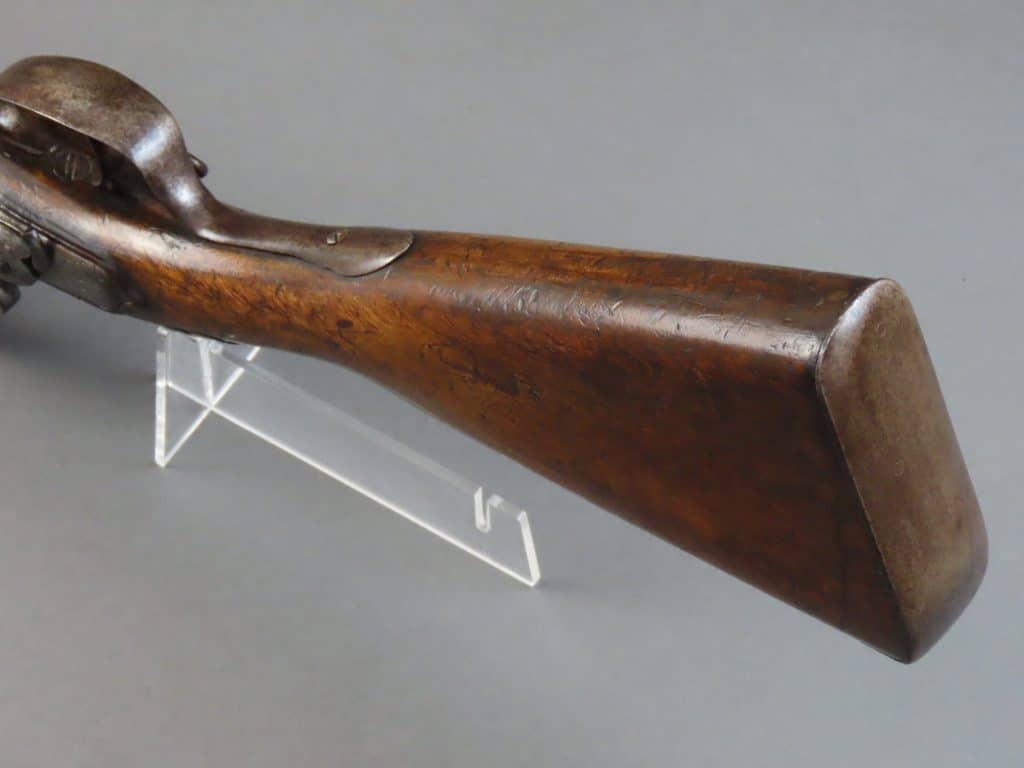 The Musketoon is in fine overall condition considering its age. The stock has some bruises and a small old repair at the tip of the fore end. The iron parts possess an attractive smooth aged patination as does the stock which has a rich chestnut colour darkened in the recesses. 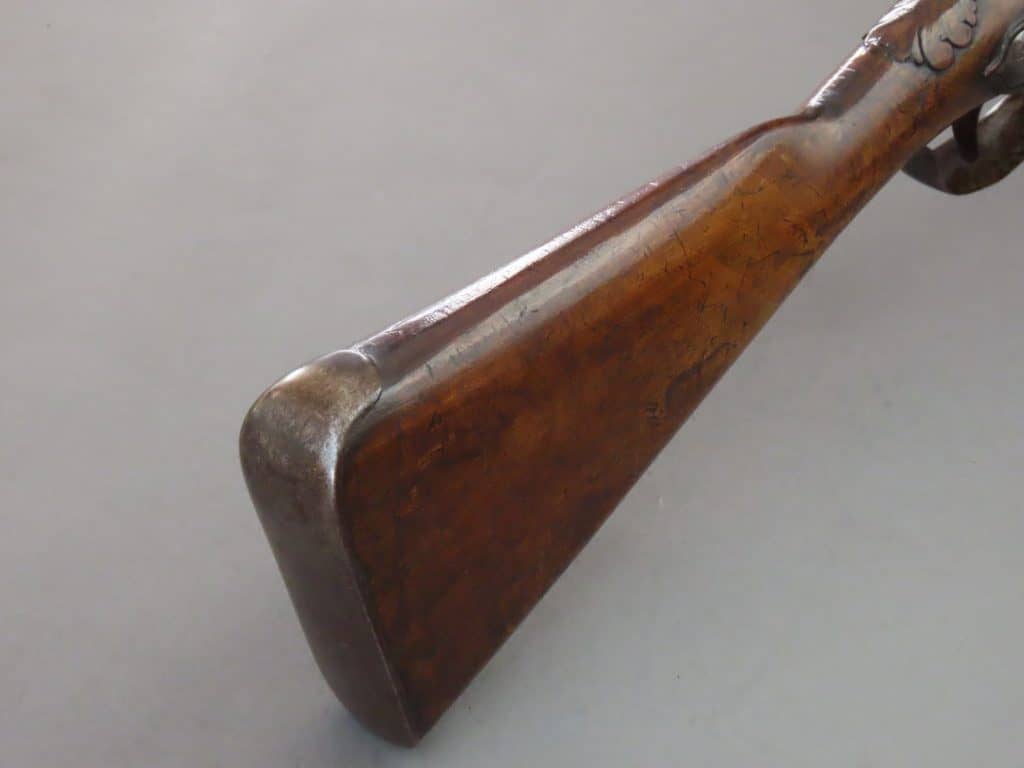 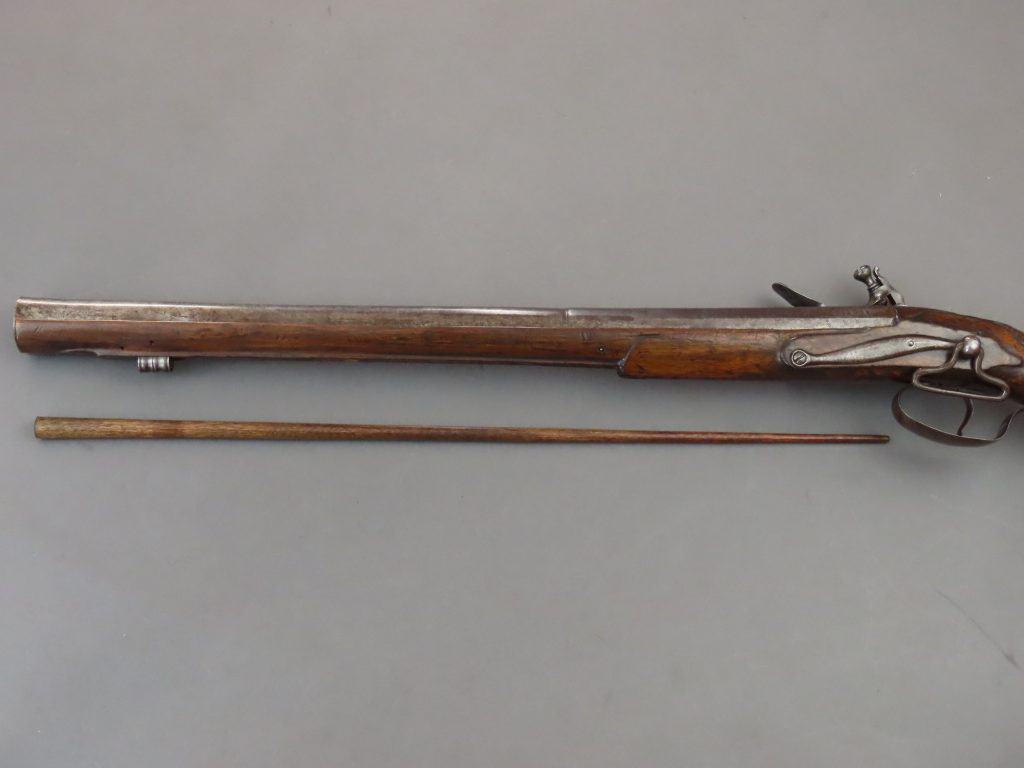