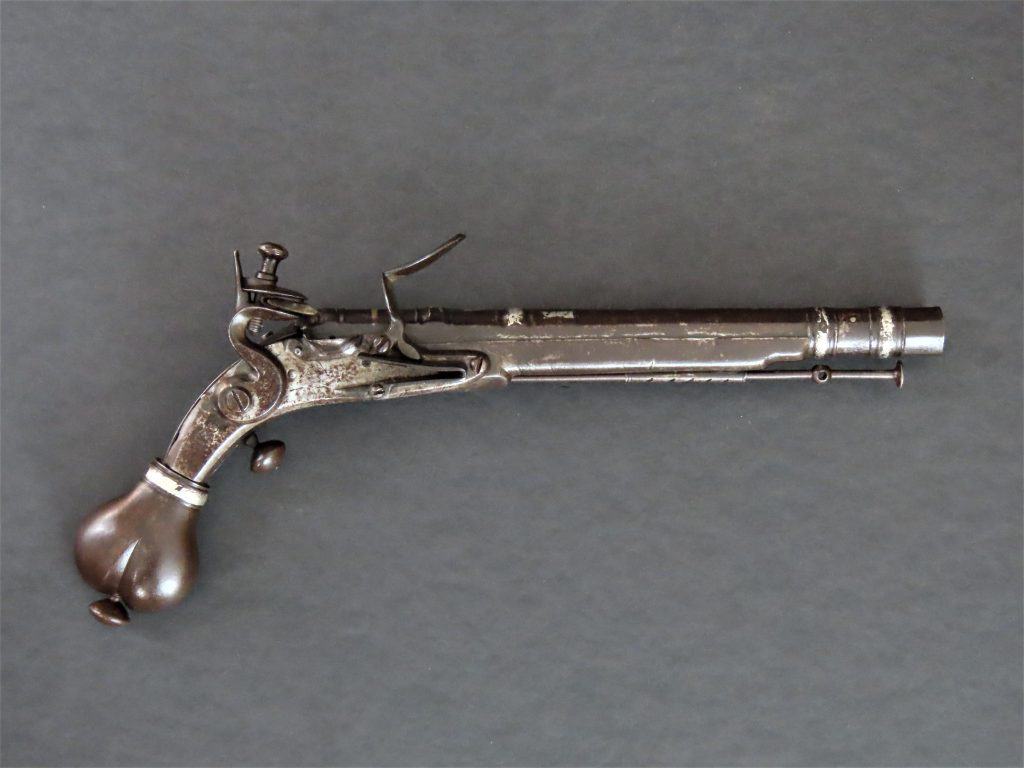 Traditional Scottish pistols were produced mainly by gun makers working in the Lowland regions of Scotland which skirted the Highland Line until the late 18th century. These were usually of all metal manufacture and the best were of a distinct Scottish design, construction and decoration. From the late 16th century five styles of Scottish pistol evolved. The first was the “fishtail butt” pistol followed by the “lemon butt” in the early 17th century. The “heart butt” and “scroll butt” arrived around the mid part of the century and finally the “lobe butt” style evolved towards the middle of the 18th century. Scottish pistols were expensive and had long working lives. Earlier styles continued to be used alongside later types for periods of time within an overall trend of preference for shorter barrels and overall pistol length as the period of production progressed. 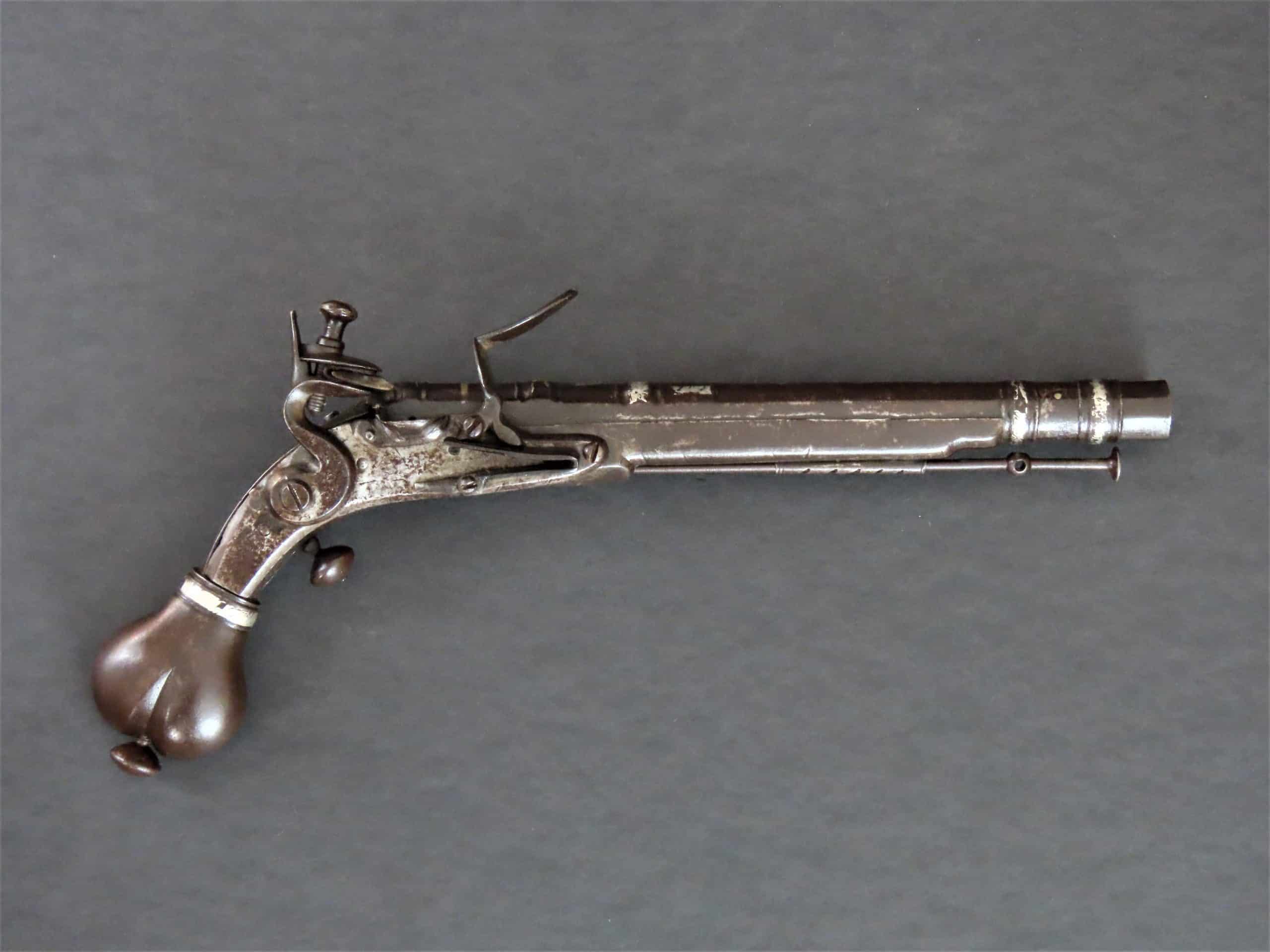 The earliest Scottish pistols were usually made of brass with steel locks although a few rare survivors have stocks of wood. From the second quarter of the 17th century iron barrels were becoming more common and by the third quarter “all steel” construction of pistols was usual although brass barrels continued to be used into the early 18th century. 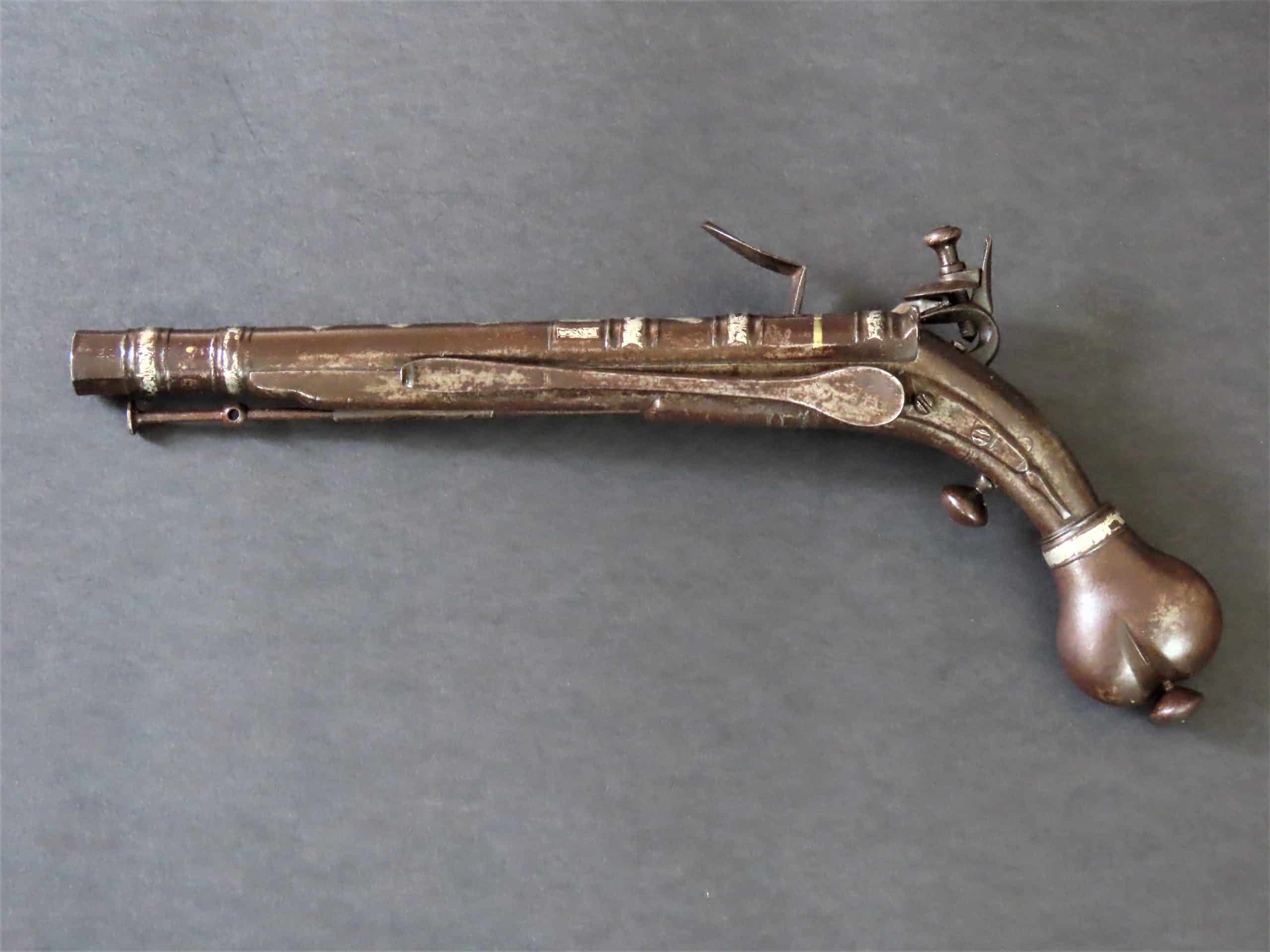 As its name suggests, the heart butt pistol is unique due to the shape of its butt. The best were made in the second half of the 17th and early 18th centuries. The last examples which date to the 1730’s are generally small and not of the same high standard of workmanship and decoration as the earlier pistols, reflecting the decline in demand for the heart butt as the 18th century progressed. It was probably extinct by 1740 after nearly a century or so of use. 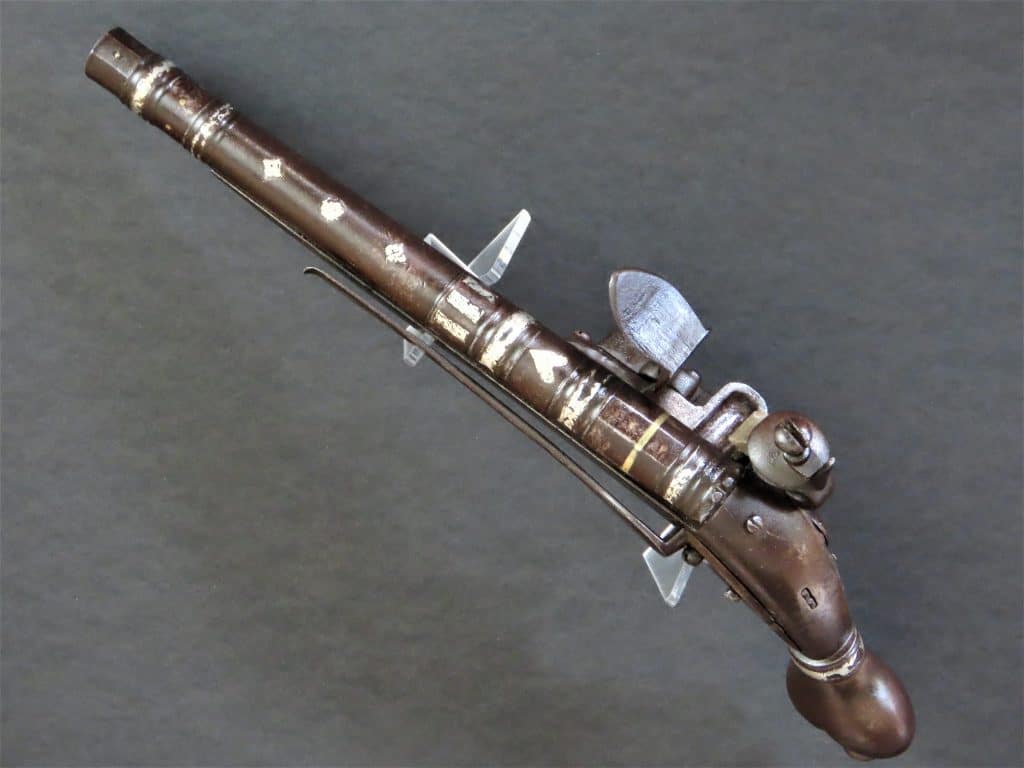 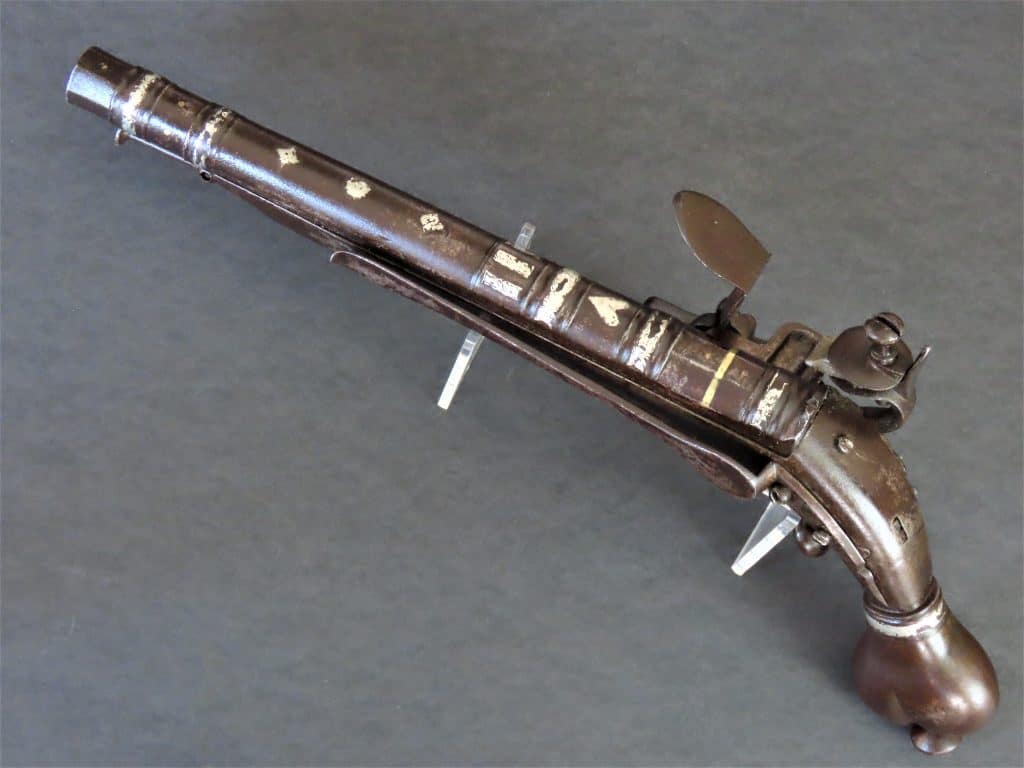 The heart butt was produced in the Lowlands of north eastern Scotland. This crescent of coastal territory stretches south from Inverness and incorporates the ports of Aberdeen, Arbroath, Montrose and Dundee, plus the inland market towns of Forfar, Brechin, Old Meldrum and Edzell. The region is separated from the Lowlands of the south, and Scotland’s capital city of Edinburgh, by the estuaries of the Rivers Forth and Tay, and had developed slightly different tastes and expressions. This is reflected in the “Lowland” Scots language which had evolved across the Lowlands from an earlier Germanic tongue. By 1700 the Scots spoken in the south was known as “Lallans Scots” whereas in the northeast the language had some differences and was known as “Doric Scots”. The uniqueness of the heart butt pistol, like the language, was an expression of the region’s identity. 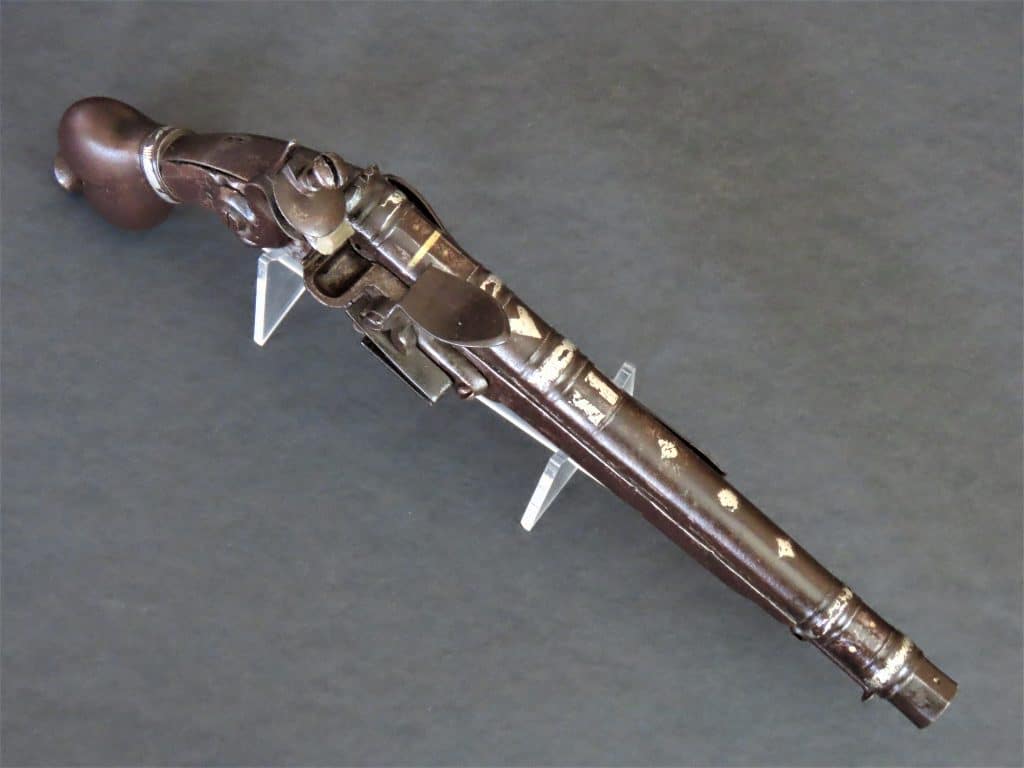 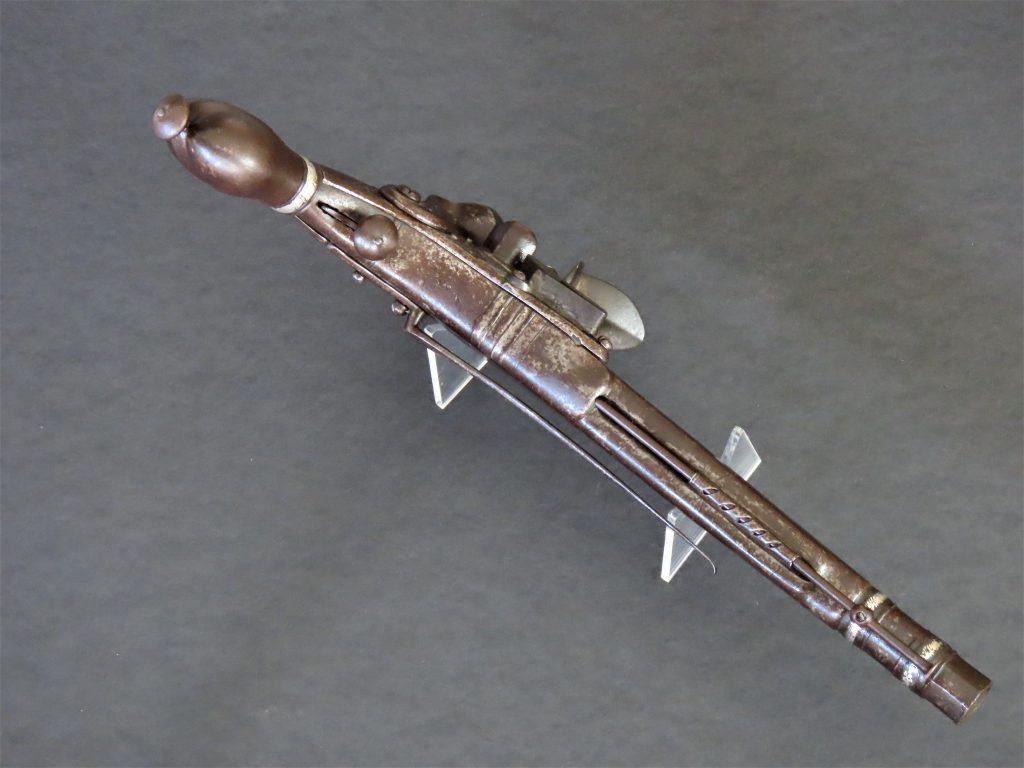 At the peak of its development the heart butt pistol was a graceful weapon with sleek lines and curves. Often finely engraved in the regional style and attractively inlaid with silver panels and scrolls, these pistols were made for the nobility and the traditional upper levels of land-owning gentry in the region. This is borne out by the family crests of owners applied to some pistols in the group. Another important market for heart butt pistols was the upper hierarchy of the Gaelic speaking Highland clans that held land in the East Highlands to the west of the northern Lowlands. The area between was a fusion of the two cultures. The clans traded cattle in the burghs in exchange for goods, particularly weapons. 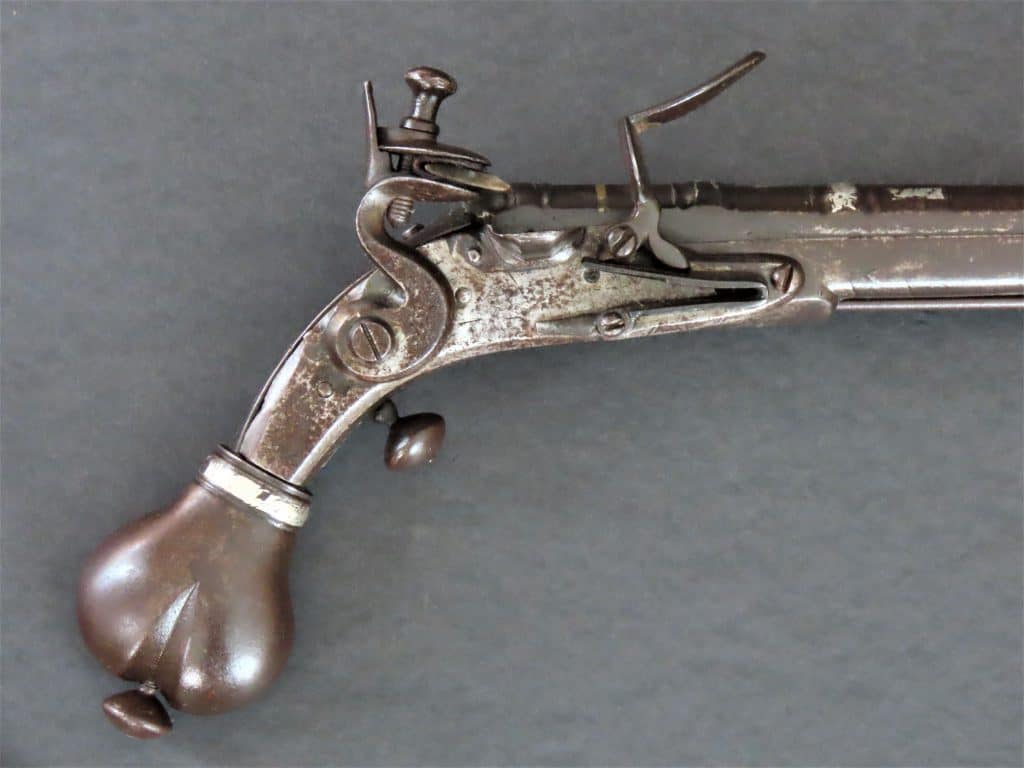 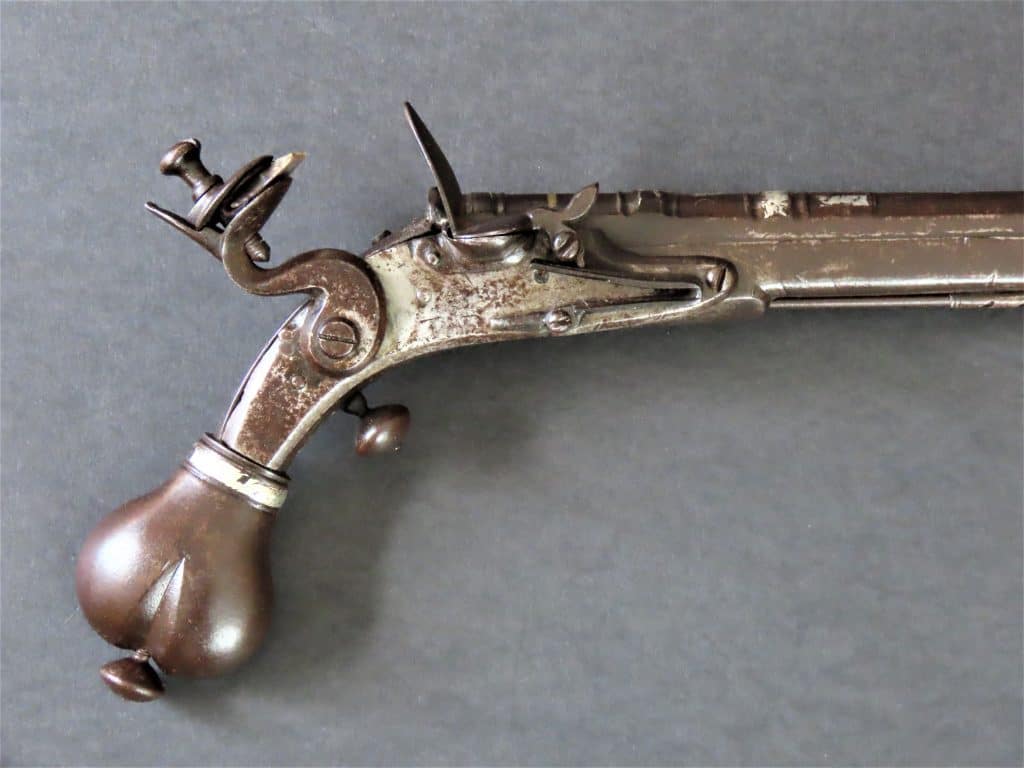 At the same time the scroll butt pistol was being produced in the burghs to the west lying along the southern edge of the Highland Line. The scroll butt had emerged as a similarly unique pistol type which satisfied demand from the clans of the Central and West Highlands. Some makers of heart butts also made scroll butt pistols. 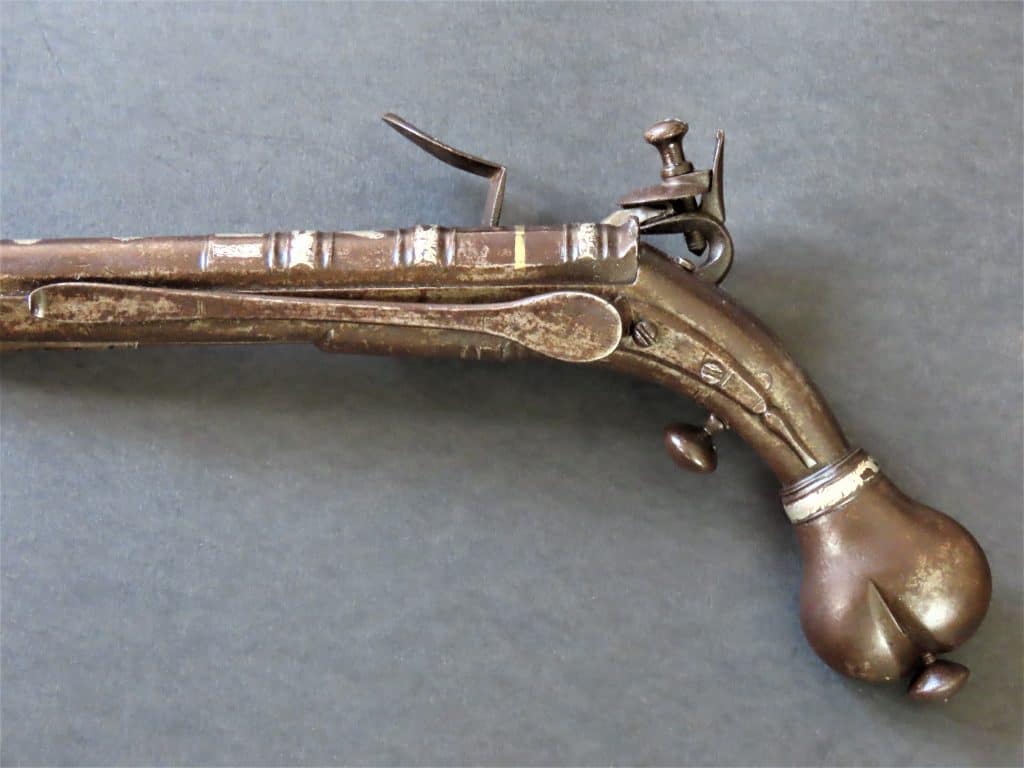 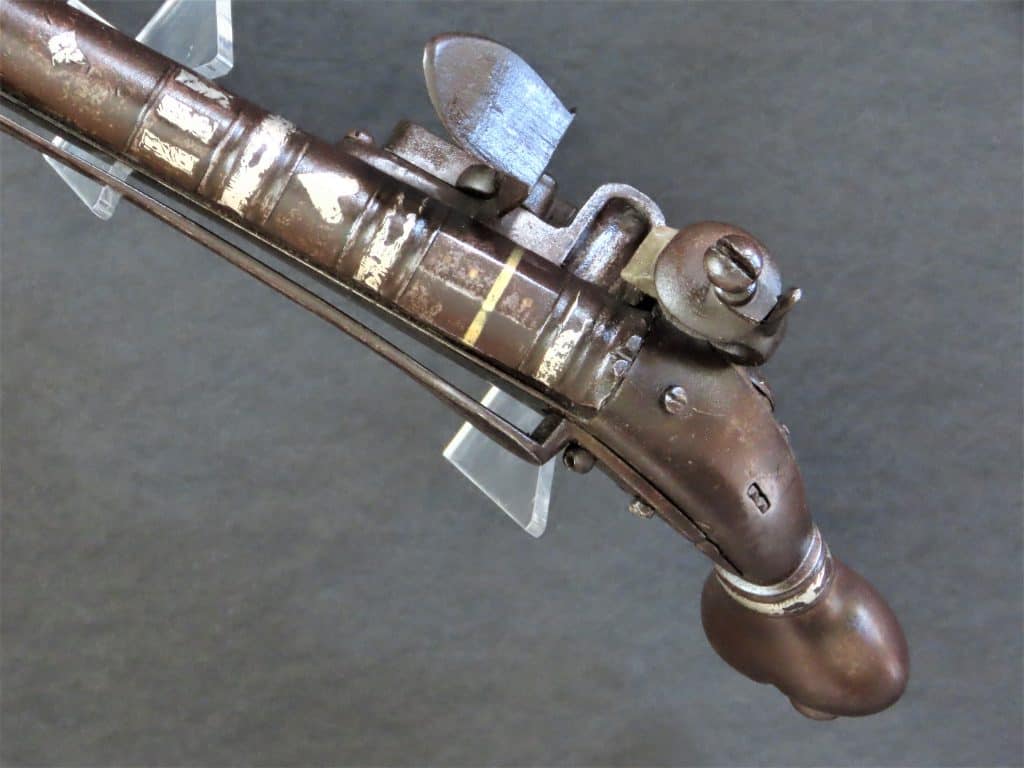 Only one contemporary portrait is known to the writer which depicts a heart butt pistol. This is by John Michael Wright (1617-94) of John Lacy (d. 1681) which was painted circa 1668-70. It is in the Royal Collection Trust and hangs in The King’s Dining Room at Windsor Castle near London (see: https://www.rct.uk/collection/402803/john-lacy-d-1681).

Lacy was an actor / playwright and a favourite of King Charles II. In the portrait he is depicted as Sauny, the lead character in his comedy play “Sauny the Scott”, performed in 1667. The tartan outfit he is wearing is probably based on what Lacy saw of the clothing worn by Scottish soldiers when he was serving on the Royalist side during the Civil War and adapted for his character. Sauny has a heart butt pistol suspended from his waist by its belt hook with a Highland dirk hanging next to it. The pistol seems to be made of brass and has a snaphance lock which places it at the earlier part of heart butt manufacture consistent with the date of the painting.

At the height of its production only a few makers of heart butt pistols marked their work, and this was usually only by the application of two initials to the lockplates. Occasionally the town in which the maker worked is detailed and sometimes a date which has allowed scholars to identify some makers by sifting through burgh archives and establish a loose chronology and evolution for the group. 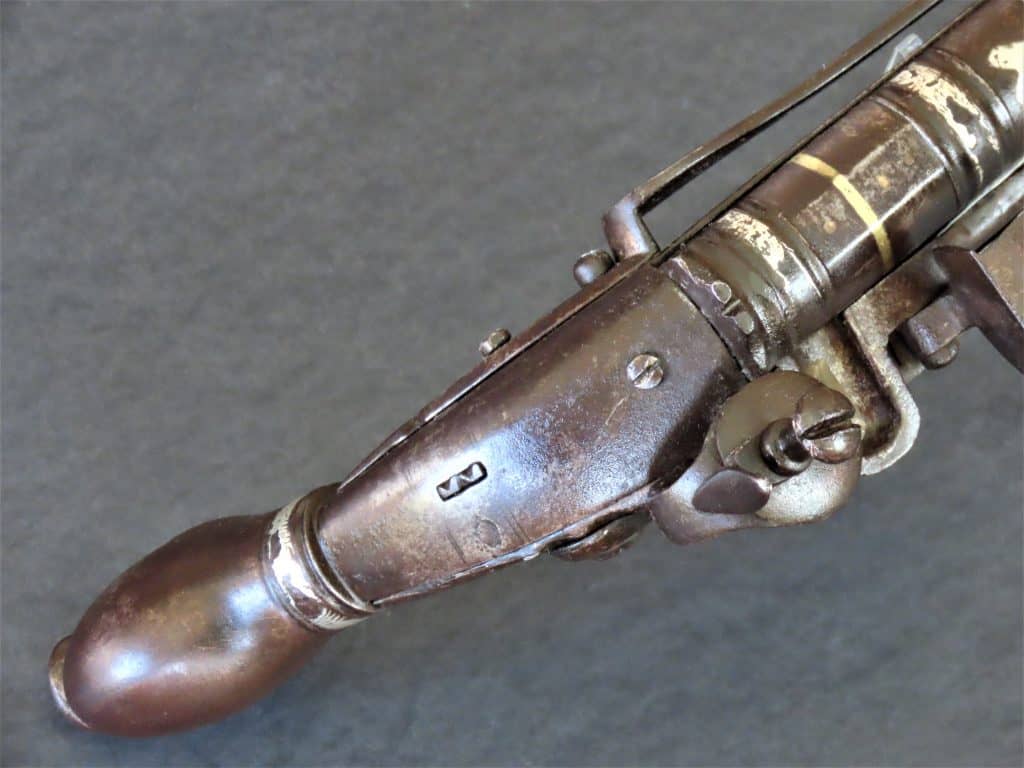 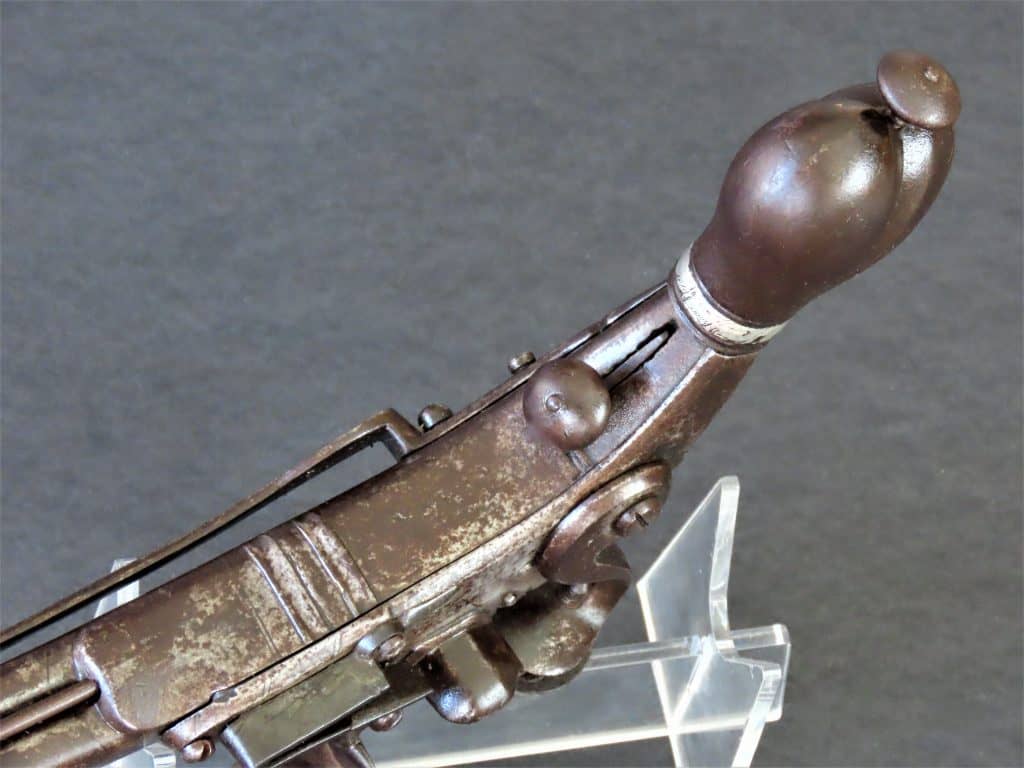 The pistol described here is constructed of steel and iron with brass with silver inlay. The initials of the unidentified maker incised onto the lockplate seem to be “T R” but the marks are worn and this interpretation of the second letter is not definitive. Often the maker’s initials on heart butt pistols, as in this example, are lightly engraved and seem more likely to wear away than more deeply struck examples.

The pistol incorporates the usual features of the type. The heart shaped butt cap secures the curved tapering assembly of the typically elongated lock plate tail with the stock. The swan-necked slab cock is mounted low down on the curve of the lock plate in typical form for this pistol type which somewhat disguises its robust nature and size. The lock is of “Highland” type in that it has a vertical sear which extends from the trigger plate through the wall of the upper part of the butt but does not have the usual lateral sear which extends through the lock plate on some other examples. There is no tightly defined form in this respect for heart butt pistols. The slot aperture for the trigger underneath has a roundly serrated edge which gives a more controlled staged trigger pull. This has a remarkable effect on the confidence of the user for such a simple mechanical innovation which is also present on other heart butt pistols of high quality. On the reverse side a long belt hook is mounted with two screws. The underside is decorated with a single transverse ribbed panel which was once inlaid with a silver strip. 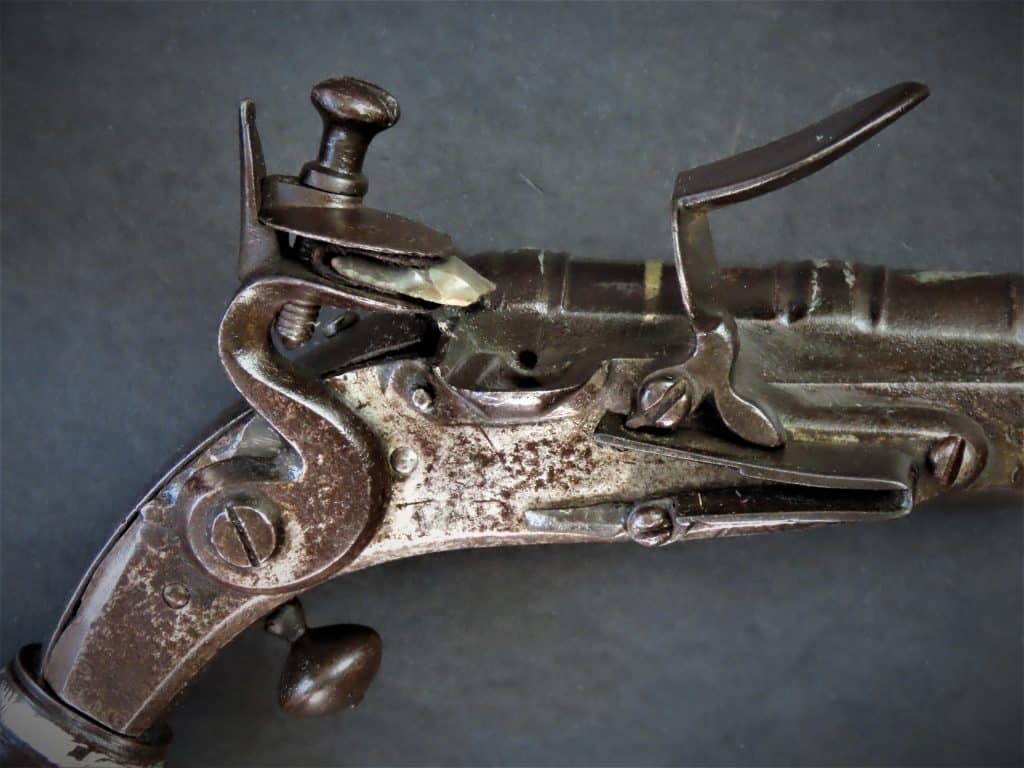 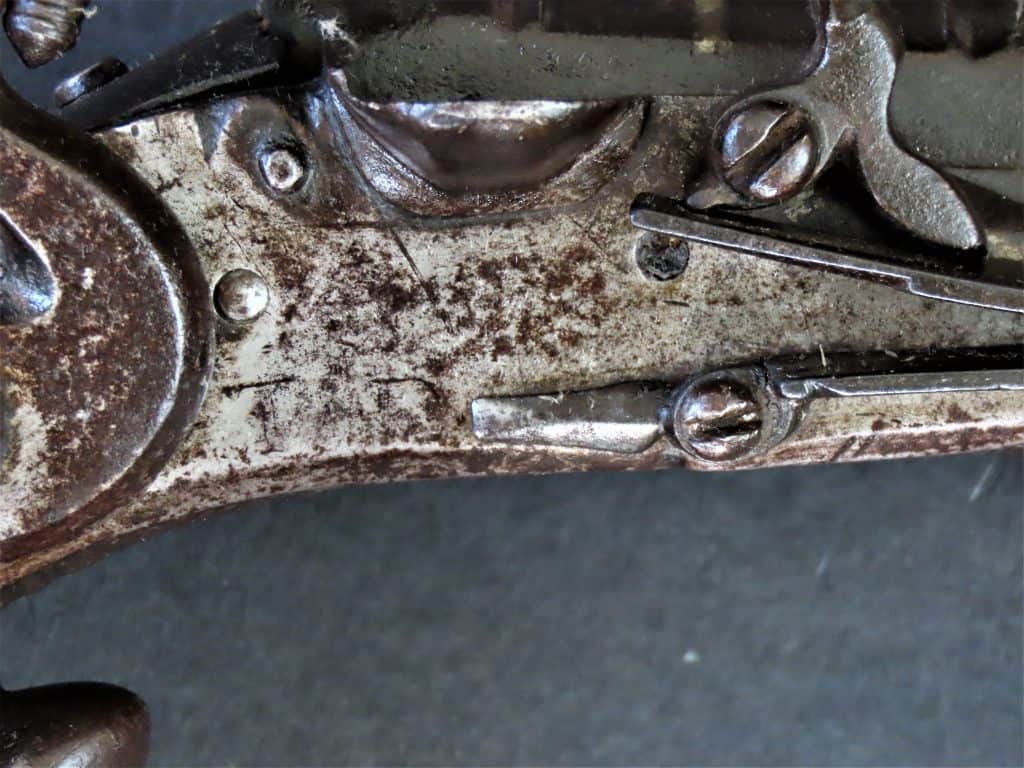 The slightly tapering barrel is segmented into panels by raised ribs inlaid with engraved silver strips. The areas between the ribs are inlaid with brass and silver strips, shaped panels and dots. The slightly flared muzzle is of octagonal section as is the barrel section near the breech which has a raised ramp with a “V” shaped sight. The ramrod pipe is vented with diagonal cuts.

The pistol is in good, uncleaned and original condition with a brown russet patina all over. The silver inlaid panels are worn and missing in part in places. The lock is in fine working order. There are no breaks or repairs.

Overall length measured extremity to extremity is 13.75 inches (35 cm) and the barrel length is just under 10 inches (25 cm).

The pistol discussed here particularly resembles in form one of similar proportions discussed by Kelvin illustrated in plate 4 and figs 29 and 30 which he dates to circa 1710. Although our pistol is less well embellished the underlying similarities in features and form indicate that both were made by the same man.