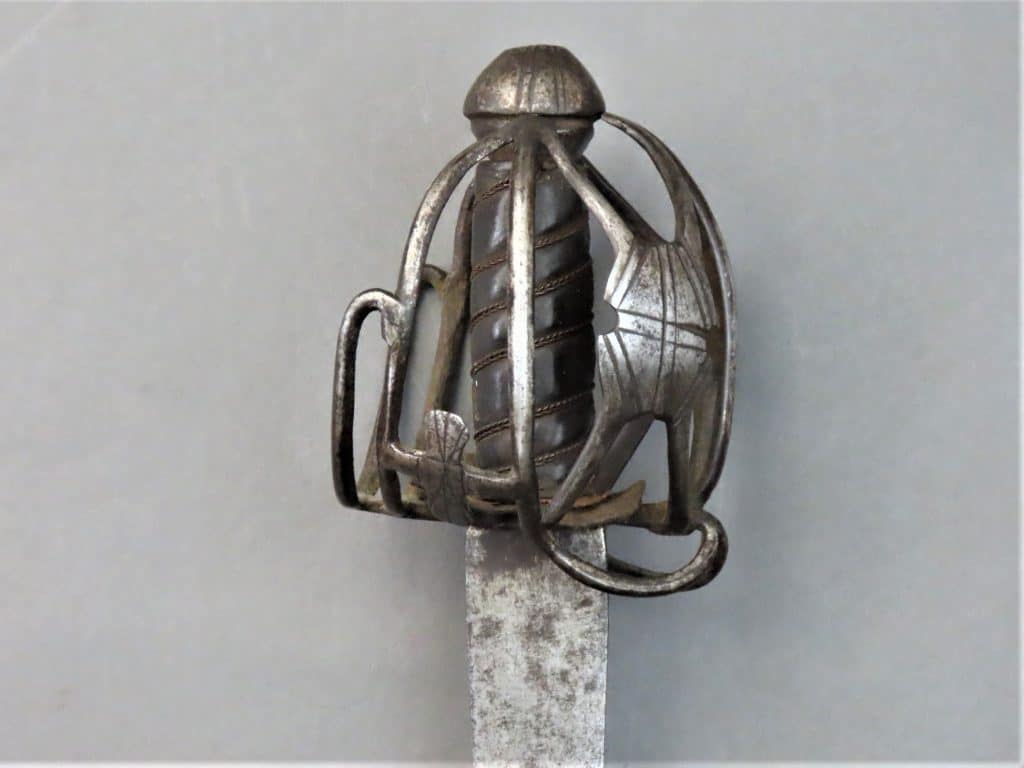 A Scottish basket hilted sword of early form mounted with a broad and robust double edged blade. This is a rare example and a noteworthy representation of its type. This sword form evolved in the early part of the 17th century and was used through to the English Civil War periods. It is the ancestor of the fully developed Scottish basket hilted swords of the later 17th and 18th centuries.

This example has its frontal guard plates formed as diamonds engraved at the edges with pairs of parallel lines to emphasise the shape.  Further pairs of lines form a decorative cross inside each panel area.  Notches are cut into the sides of each plate marking the beginning of the trend of Scottish sword makers to file frets and merlons into the edges of guard plates which became more complex and decorative on later swords with larger guard plates. The dome-shaped pommel has a groove chiselled around its circumference just below its middle which secures the main guard arm terminals. The tang end is peened over inside a flattened circular area on top of the pommel from which four pairs of parallel lines radiate outwards and terminate at the edge. The flattened butterfly shaped merlon bars at the sides strengthen the hilt structure by joining the main guard bars and are decorated with lines and crosses.

The spirally grooved grip is wrapped  with a leather covering stitched together down the front and bound with contra-twisted double sided lengths of wire. The grip retains the shrunken remnants of its original deer skin liner with the remains of its hair underneath.

The double-edged blade is of lenticular section and gently tapers to its tip. It has a rudimentary ricasso and central fuller with the remnants of an armourer’s mark each side formed as a series of letters. The lack of definition to the fullers and the ricasso  indicate that the blade may have been slimmed down from a larger earlier blade. This is not infeasible given the popularity of two-handed and hand-and-a-half size swords in Scotland until the beginning of the 17th century when they went out of fashion in favour of basket hilted swords for which many of the redundant larger blades were ground down for single hand use with companion targes.

The hilt closely resembles the basket guards of a number of Scottish swords illustrated in Cyril Mazansky’s “British Basket-Hilted Swords” (Boydell Press 2005), and in particular references D9, D10, D10a and D10b on pages 80 to 82. These swords have similar hilt structures and engraved line patterns to the frontal guard panels and side guards. These swords are housed in various important collections including Blair Castle in Perthshire, the Marischall Museum in Aberdeen and The Royal Armouries. Two further similar swords housed in the National Museums of Scotland, are illustrated in John Wallace, Scottish Swords & Dirks, 1970, Arms and Armour Press, figs 23 and 24.