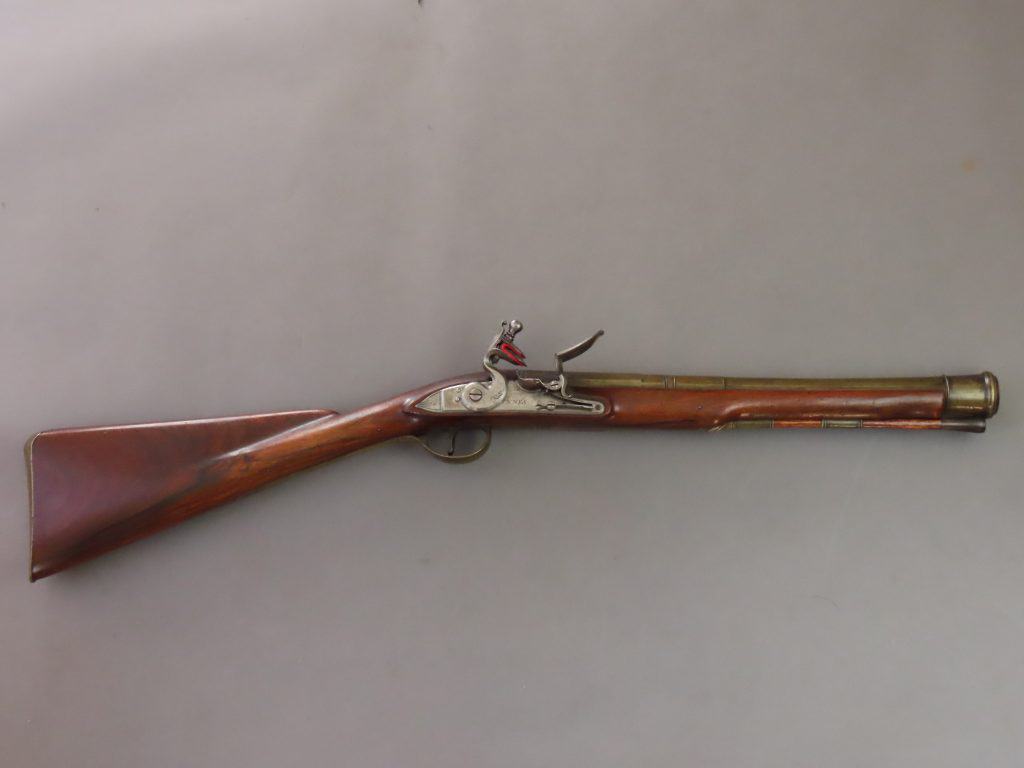 A Scarce Flintlock Blunderbuss by James Innes of Edinburgh circa 1805

A very nice Scottish blunderbuss by James Innes dating to the era of the Napoleonic Wars. Scottish blunderbusses are not common and this example with its well made, sleek and minimalist form is typical of the Edinburgh gun trade in the late 18th and early 19th centuries. The blunderbuss is notable for its original, uncleaned, very fine condition. It was most likely manufactured for one of the coaching companies in Scotland.

James Innes was a well known gunmaker in Scotland and further afield. He was the son of Francis Innes, another well known gunmaker in Edinburgh, and is first recorded in 1792 when he was admitted as a gunmaker to the Edinburgh trade. In 1795 James was in partnership with James Wallace, his cousin, who had served his apprenticeship with James under his father Francis. Their firm was called Innes and Wallace with the prestigious title “Gunmakers to His Majesty” and was based at 25 North Bridge. In 1803 he is recorded as in business on his own as “James Innes, gunmaker to His Majesty” at the same address. It is not known why the partnership ended. James last appears in the Edinburgh records in 1819.

The blunderbuss is mounted with a brass barrel with a ribbed bell mouth. It is of octagonal section near the breech. The top flat section is engraved with “EDINBURGH” representing the place of manufacture. The section below on the off-side to the lock bears the London Gun Company mark and View mark both under a crown. This is in common with most of Innes’s firearms. Although Scottish gun barrels did not require proofing the most prestigious Scottish gunsmiths sent barrels to London and Birmingham to be proved and stamped  in order to appeal to a broader market than Scotland alone.

The barrel tang is engraved with a floral design and the tang screw is engraved as a flower head. Further along the barrel towards the muzzle the octagonal section is shaped into a more multifaceted cross section for a short distance after which the barrel is of rounded section, narrows slightly, then widens towards the muzzle. The barrel is crossed by raised moulded bands at intervals, especially to strengthen the muzzle, which resembles the mouth of a cannon.

The stepped lock has a bevelled edge. The tail is sparingly engraved with a foliate design and is the bow of the swan-necked cock. The maker’s name “INNES” is inscribed at the bottom of the lockplate underneath the bridled pan. The lock is secured to the stock by two iron dome-headed screws visible on the reverse side, fixed into brass washers flush with the stock surface.  The trigger terminates in a backward curl. The trigger guard is of brass, and delicately engraved with an acorn finial to the front and a floral terminal to the rear. The bow of the trigger guard is decorated with a five-petalled rose with foliage on the outside.

The stock is of walnut mounted with a brass butt plate engraved with a stand of arms on top and is secured to the stock by two flush broad headed screws. The tapered ramrod has a horn cap at the wide end and is mounted with an iron worm at the tip. The ramrod fits into a tube drilled into the underside of the stock and is held in place by a ribbed brass ramrod pipe plus an engraved and ribbed tail pipe.