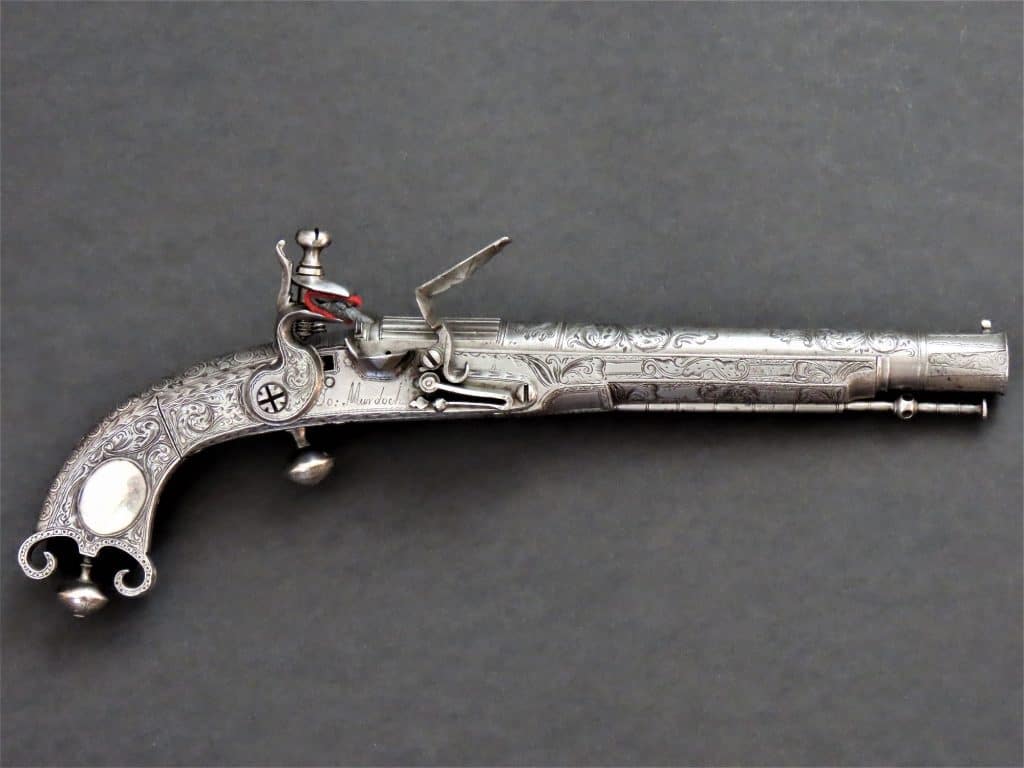 Doune was a well-known centre for the production of high-quality all-steel pistols in Scotland. This example by John Murdoch is typical of the standards attained by the pistol makers there and is almost a unique survivor in being mounted with a rifled, rather than the more usual smooth bore barrel and a roller frizzen. The pistol is most likely one of a pair which became separated at some time.

Little is known about John Murdoch. A note in the Statistical Account of Scotland, Vol. XX, in 1798, p.86, suggests that he was apprenticed to one of the Doune based pistol makers in the family line of Caddell. Thomas Caddell Senior had  established the industry in Doune in the mid-17th century. This late 18th century account says of the gun making trade in Doune at the time:

‘The trade is now carried on by John Murdoch, also famous for his ingenuity in the craft and who has likewise furnished pistols to the first nobility of Europe. These pistols were sold from 4 to 24 guineas a pair… when Mr. Murdoch gives over business, the trade, in all probability, will become extinct’.

It seems likely therefore that John Murdoch was the last traditional pistol maker still in business in Doune at the end of the 18th century. It is not known precisely when he started and ended his career, but it was certainly a very long one, a period covering the hiatus of Doune as a pistol making centre through to the end of its decline. His earliest pistols are thought to date to circa 1740 (Note 1) and he probably worked into the early 1800’s and died in 1812.

Our pistol is typical of the distinctive Doune style. The four stage barrel has a fluted breech with a notched back-sight and flared muzzle of octagonal section engraved with fine scrolls and mounted with a fore sight. The middle sections of the barrel are rounded and boldly engraved with panels of scrolls and foliage. The barrel is rifled with eight grooves. This is a rare and expensive feature on Scottish pistols of this type and date, but not so unusual on some English pistols. Earlier Queen Anne pistols for example were noted for their rifled barrels.

The spine of the butt is engraved with a pattern of intertwined inlaid silver scrolls of descending width in contour with the stock which terminates at the scroll butt terminal enhanced with incised scrolls and foliage. A vacant silver oval escutcheon is bedded into each side of the grip. The fore end is engraved with scrolls, acanthus leaves, linear designs, chevrons and border ornament on four planes. The button trigger and pricker are formed from cups of silver brazed together and engraved with four petals which radiate from the tang end in the middle.

Underneath, the space is decorated with fine linear engraving of scrolls, parallel lines and waves, crossed by three bands of inlaid silver engraved with chevrons. The belt hook is attached to the stock with an engraved double roundel pierced in similar manner to the guards of the finest traditionally made Scottish basket hilted swords. This slender hook is engraved at the base and curls slightly outwards towards the end. The pistol is mounted with a slender steel ramrod with a pierced and engraved terminal.

The border engraved flat bevelled lock is of typical “Highland” form with a horizontal sear extending through the lock plate which holds the cock in the half cock position, and a further vertical sear which emanates from the top of the trigger plate, the terminal of which is visible through a slot on top of the spine. The lock plate is decorated with scrolling foliage on the tail, cock en suite and the faceted steel is engraved with lines. The lock plate is signed “JO: Murdoch”.

The frizzen is mounted with a roller. This feature first appeared on English gunmaking in the 1760s, and like the rifling in the barrel, was probably a particular requirement from a discerning customer influenced by advanced gunmaking methods and features which Murdoch would be familiar with given he was “famous for his ingenuity in the craft and who has likewise furnished pistols to the first nobility of Europe”. Many features of the pistol point to it being made in the earlier part of Murdoch’s career when the roller frizzen started to feature in English gunmaking. It must be considered that the roller may be a later embellishment but does not appear to be so.

Reference a pistol in The National Museums of Scotland illustrated in James Arthur, “The Doune Pistol Makers Part 2 – The Murdochs”, Guns Review, Vol 16, No 5, May 1976, page 245. The pistol described here is very similar to that described in the Review by virtue of its overall contours, the obvious chunkiness of its mass and the sumptuous high quality of the “early” style engraving

The pistol is in fine crisp condition. Some old small patches of rust have been cleaned off in the past leaving a few shallow patches of pitting visible in the photographs below.