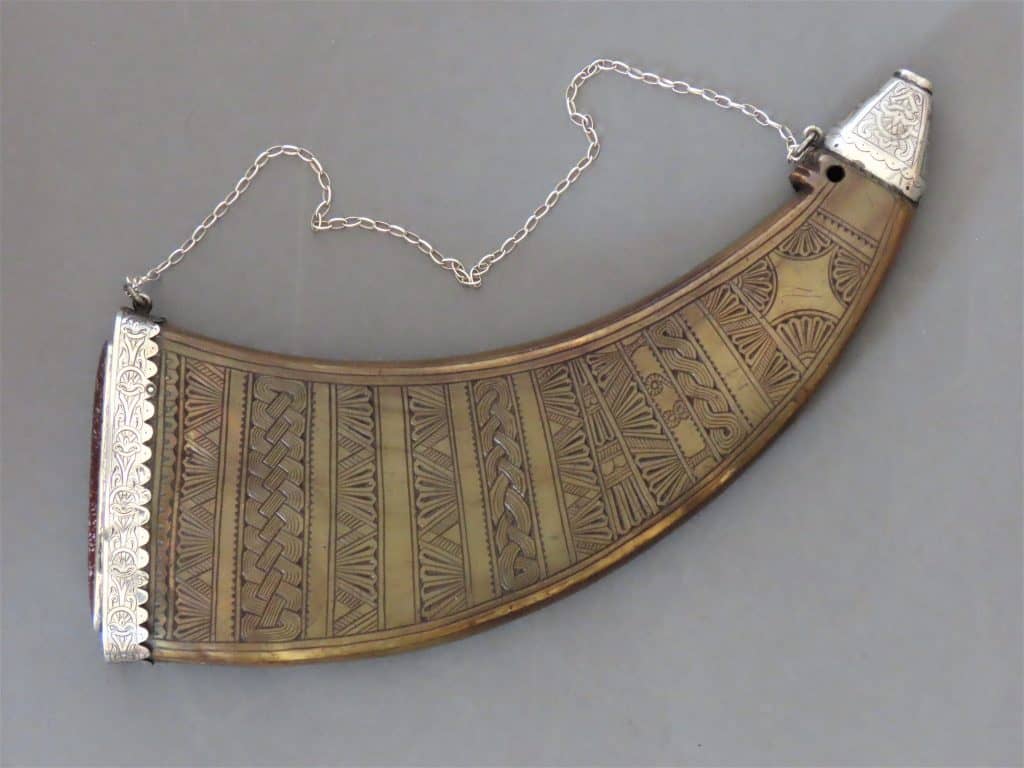 A large, well-formed and beautifully engraved late 17th century Highland Scottish powder horn dated 1681. The patterns present on horns of this type are like other Celtic / Gaelic cultural motifs which appear on contemporary targes, dirk handles, sporrans and plaid brooches associated with “Highland” Gaelic craft manufacture and art of the time.

The flask is fashioned from the pointed end of a cow horn which has been heat-softened, pressed into shape then allowed to re-harden. The outer side is profusely decorated with panels of typical Celtic / Gaelic interlace, scrollwork and fans within lined borders. The reverse side is decorated with two bands of arched ornament and two thicker bands of interlace. A further band near the nozzle has the initials “D C” inside separated by a heart with two crossed arrows inside. The spaces between the bands is vacant. A raised moulded rib near the muzzle is pierced with a suspension loop.

Traditional Highland Scottish weapons are rare not least as a result of the prohibitions which followed the failed and last Jacobite Rising of 1745. In the second quarter of the 19th century, particularly after George IVs visit to Edinburgh in 1822, the gentry revived Highland Scottish dress and culture in a movement known as the “Highland Revival”. Some surviving traditional Scottish weapons were dusted off to be hung on baronial walls and some were brought into use as part of Victorian style Highland dress.

This powder horn was brought out of retirement and modified to Victorian tastes as a dress accoutrement and retains its traditional decorous appearance. The usual wooden base plug has been replaced with a large oval silver cap which folds over the edge with a scalloped rim decorated  with floral scrolls whilst on top in the centre an oval shaped piece of polished pink granite is secured with a silver mount surrounded by a pattern of chevrons. The pyramid shaped silver nozzle is decorated in similar style to the rim of the plug and is mounted with the name of the silversmith that carried out the update, JAS RAMSAY, DUNDEE, who was at work in the city in the second quarter and middle of the 19th century. Both mounts are of fine quality. Each has a silver suspension loop between which a silver chain has been attached.

For further examples of Highland powder horns see “The Swords and the Sorrows”, National Trust for Scotland, 1996, pages 73 to 75, and the accompanying article by Jackie Mann. Horns like this were made by horners settled in the Highlands and around the fringes, near markets, and on established drove roads, in a period when firearms were gaining great popularity in the Scottish Highlands.

Surviving dated horns indicate that the peak period of the best quality manufacture was from the 1660s to circa 1700. This horn corresponds to “Type A”, in Whitelaw’s classification system, which are “Horns with their surface divided up by cross bands of interlace and fan ornament, with one or two square or oblong panels”.

Overall the horn is in very good condition compared to its surviving contemporaries.  There is a piece of minor flaking near the nozzle and a minor dent to the horn edge which is not unusual. The nozzle has lost its stopper. The overall length, measured from extremity to extremity is 12 inches (31 cm). The base is just over 4.25 inches across (just under 11 cm).