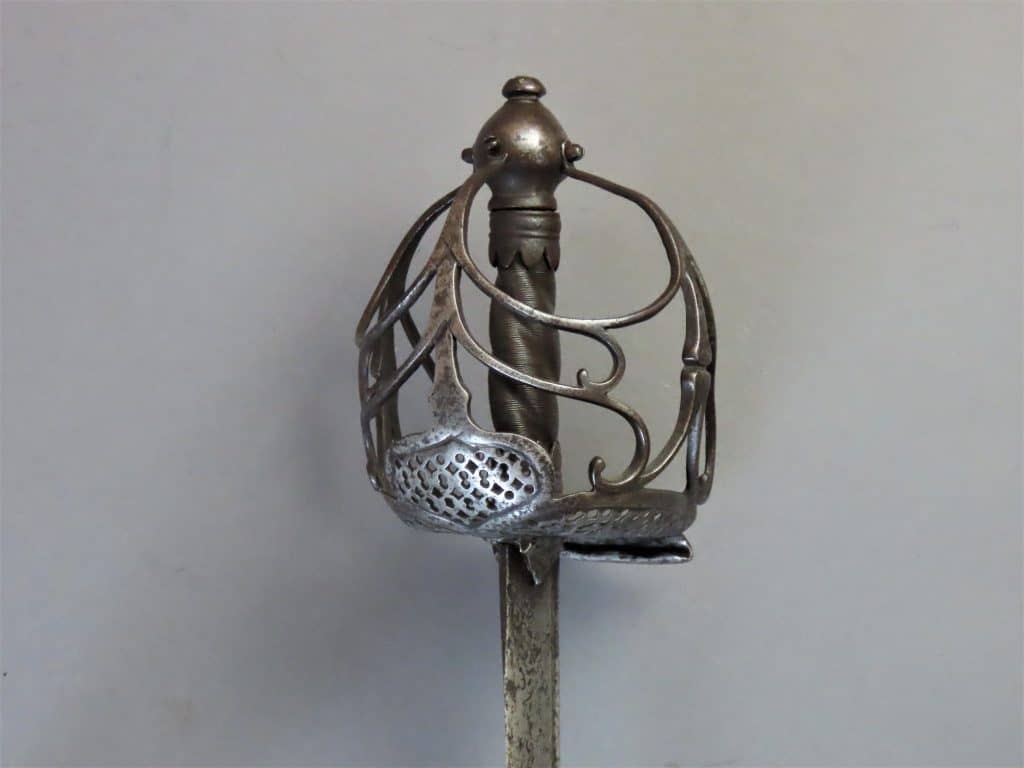 A rare English “Mortuary” sword, dating to the middle part of the 17th century

A rare English “Mortuary” sword, dating to the middle part of the 17th century and the English Civil War, Commonwealth and Protectorate periods. The sword is a rare hybrid type with hilt features common to both contemporary English Mortuary and Walloon swords.

The hilt is of typical “Mortuary” form consisting of a broad saucer-shaped guard plate from which three main curved guard bars taper upwards ending with flattened angled terminals screwed into the pommel to secure the structure. The wide back edge of the plate is tightly scrolled downwards to create a wrist guard. The grip sits on top of a flanged plug inside the guard beneath which two short triangular langets extend through the base to secure the blade at the ricasso on either side.

Whilst of “Mortuary” type, the hilt differs from the usual form. The guard plate is chiselled on the outside with the outline of two clams, one on either side of the blade, which emulate the side guard plates of English contemporary “Walloon” swords. The insides of these areas are pierced with regular patterns of diamond, circle, and figure of eight shapes, similar to the piercings in the plates of Walloon swords. The oval panel to the front of the guard plate at the base of the knuckle bow is an extension of the plate which is also pierced in the “Walloon” manner.

The guard bars are narrower but thicker than the usual flat bars of mortuary hilts. The two secondary guard bars which emit downwards from the knuckle bow either side terminate in pronounced curls which fall short of reaching the side guard bars to which they are usually fixed. Instead, the bars are joined together, and the bottom bar is joined to the plate below. The upper bar is extended to create a crescent which is fixed onto the side guard bar to secure the front and side structures.

The middles of the side guard bars are swollen and bisected to create knops and whilst this feature is common, but not exclusive to English Walloon swords, it is not common on mortuary hilts. The curved rear secondary guard bars which extend downwards from the side bars to the plate near the wrist guard terminate in pronounced curls like the secondary bar terminals which emit from the front knuckle bow.

The onion shaped pommel is smoothly multifaceted with eight sides and has an integral button on top and a pronounced flared neck beneath. It sits on top of a spirally grooved oval section grip wrapped with thin wire and supported by ribbed iron mounts top and bottom with crescent edges.

The German-made single-edged blade has a short ricasso and a pronounced fuller which extends from the hilt underneath the spine to a few inches from the tip after which it is double edged. On one side the armourer’s mark of a running wolf is present and on the other an orb and cross mark is present. Both marks are typical of the makers in Solingen and Passau. The marks are supported by other letters and symbols, probably mythical, the meaning now lost. Each side near the hilt are the remains of foliate engraving. Huge numbers of blades were imported into Britain during the Civil War period from Europe to fulfil demand for swords on both Royalist and Parliamentarian sides. The blade is 34 inches long (86.25 cm) and overall the sword measures just under 40 inches (101 cm) long.

Two mortuary swords, almost identical in manufacture, and almost certainly from the same workshop, are illustrated in Mazansky on pages 245 and 246. One is in the Kienbusch Collection, Philadelphia Museum of Art, Reference 1977-167-621, and the other sold through  Christies London, lot 54, 7th May 1981. Other Mortuaries with similar secondary guard arrangements are featured on pages 250 and 263. Contemporary English swords of definite Walloon type which display similar features are illustrated in Mazansky on pages 282, 283 and 284, mounted with typical teardrop wrist guards etc and probably made by the same workshop that made our sword.