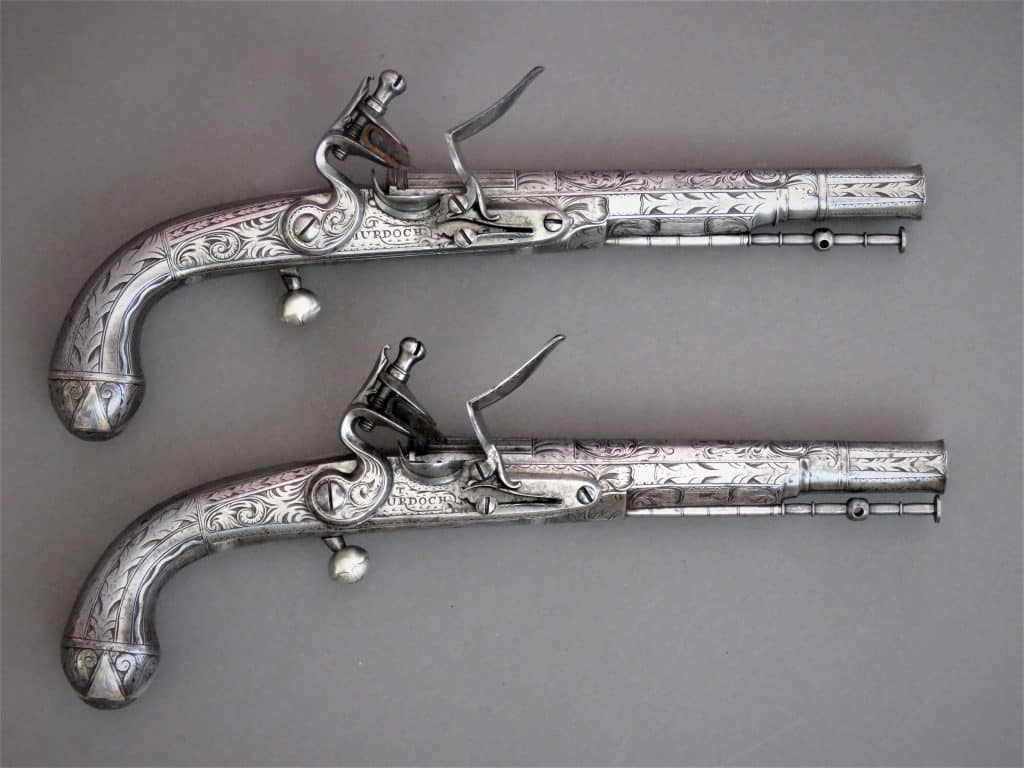 An attractive and rare pair of 28 bore all steel Scottish Lobe Butt pistols by Thomas Murdoch of Doune, dating to the third quarter of the 18th century, presented in fine and original condition. These pistols are typical examples of the high standards represented by the Doune gun makers. Pistols of this type and date were popular with officers in Scottish Highland regiments on service in North America through the Revolutionary War period and in Europe.

Both lobe and scroll butt styles were produced at the same time in the mid-18th century by the Doune gun makers. The only difference between the two forms being the shape of the butt terminal. The typical Doune decorative style applied to both types relates to the barrel decoration, the scrolls on the lock plates behind the cocks, and on the fore ends, spines and undersides of the pistols.

The pistols illustrated here are finished in this manner. Both cocks, and the areas behind them on the lock plates, are engraved with scrolling foliage. The spines of the butts are engraved with parallel sets of lines infilled with chains of chevrons, scrolls and waves. A silver roundel is bedded into the spine of each pistol just behind the barrel tang screw which contains the remains of the crest of the owner now too worn to identify. The fore ends are engraved with scrolls, acanthus leaves, linear designs and chevrons on four planes. The button triggers are formed from cups of silver brazed together and engraved with four petals which radiate from the tang ends.

Underneath the locks the space is decorated with fine linear engraving of scrolls, parallel lines and waves, crossed by three bands engraved with chevrons, two of which are of silver. The base of each butt is centred with a silver button, surrounded by two engraved bands and four inlaid silver triangles, the points radiating outwards, interspersed with panels of scrolls. The belt hooks are  attached to each stock with a roundel. These slender hooks are engraved at the base and curl slightly outwards towards the ends. Each is engraved with the number “24” which is probably an old rack number for a collection or armoury.

The locks are of typical “Highland” form with a horizontal sear extending through each lock plate which holds the cock in the half cock position. The lock plates are each signed “T” with “MURDOCH” beneath, with a downward pointing scroll extension to the right hand leg of the letter “R” which extends to the front of the name then upwards and back to curl around the letter “T”, in typical form for the signature of this maker.

The four stage barrels have fluted sections near each breech and flared muzzles with octagonal sides engraved with fine scrolls. The middle sections of the barrels are rounded and boldly engraved with scrolls and foliage. The overall length of each pistol extremity to extremity is just over 12 inches (30.5 cm). The barrel lengths are just over 7 inches (18 cm).

Thomas Murdoch’s baptism is recorded as of 9th May 1735, the son of John Murdoch and Margaret McMien in Tenemon. His marriage is recorded on 18th December 1766 to Ann Buchanan in the Parish of Port of Menteith. Both events are detailed in the Kilmadock Parish Register. This is an administrative area which recorded births, deaths and marriages in the Doune region of Perthshire. Some recorded Doune gunmakers were interred at Kilmadock burial ground which is a short distance from Doune.

Thomas Murdoch started his gun making career in Doune. In 1774 he is recorded as “Gunsmith in Leith”. Leith was the main port for Edinburgh and Thomas was based at “Leith Walk”. Presumably he moved his business from Doune to Leith as demand for high quality and expensive traditional Doune style pistols shrank in the Highlands due to the disarming measures taken by the Hanoverian government after the failure of the ’45 Rebellion. Previously the Highland Clans had been an important market for the Doune gun makers. During this period some other Doune based gun makers, like Thomas, moved their businesses elsewhere to supply other markets, particularly the military.

The later pistols made by Thomas Murdoch sometimes incorporate the place of production as “Leith”.  According to the Scottish Statistical Account a pair of pistols made by Thomas Murdoch, “a tradesman taught in Doune”, were presented by the City of Glasgow to the Marquis de Bouille in 1784 (see Charles E Whitelaw, “Scottish Arms Makers”,  page 43). Thomas is recorded as active in Leith in 1774, 1780, 1782 and finally in 1790.  It seems he was succeeded in the family business by his son William first recorded in 1793 at Leith Walk. Presumably William inherited the business and its premises from his father.