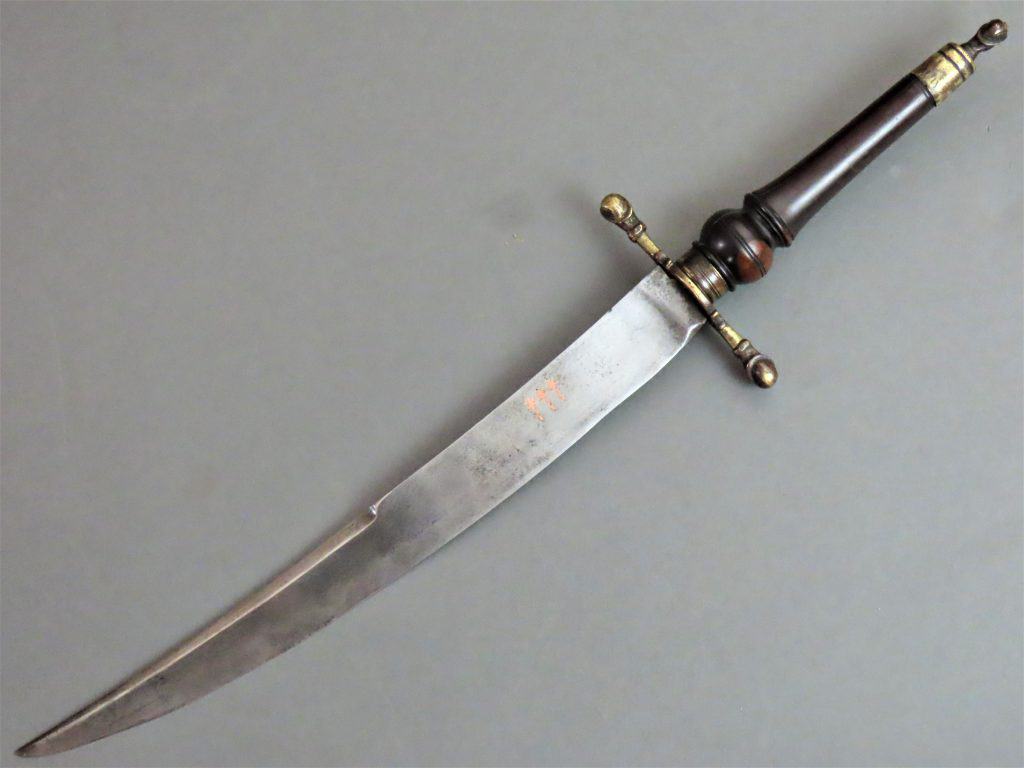 A good English Plug Bayonet made for an Army Officer and dating to circa 1690 to 1700. Plug bayonets were used by the British military after the middle years of the 17th century until they were replaced with the socket bayonet in the early 18th century. This is a representative example with much of the original fire gilt surface still present on the brass mounts.

The slightly curved single edged blade becomes double-edged for over a third of its length towards the point. On one side near the hilt it is inlaid in brass with three inset comets. These are the mark of John  Hathaway who was granted the use of this symbol by the Worshipful Company of Cutlers of London on 26th September 1689. He is a well known maker of blades of  exceptional quality for plug bayonets and several other examples of his work have been recorded.

The figured hardwood grip is of circular section tapering towards the pommel and has the characteristic swelling at the base with a thin turned collar below and brass ferrule mounted between the collar and the cross guard. The cross has a thick oval block with faceted edge and horizontal quillons with the helmeted heads of classical warriors at the terminals. The tapering brass pommel sleeve is surmounted with a similar head on the pommel top.

The particular feature of helmeted heads forming pommel caps and / or quillon tips was noted by Harold Peterson as a particularly “English pattern that seems to have been very popular during the very late 17th century, and possibly the opening years of the next century” which “boasted pommels and quillon terminals in the form of helmeted heads”. A survey of plug bayonets by R.D.C Evans devotes a section to English plug bayonets and notes that those with helmeted heads are English and illustrates several bayonets of this type.

Evans records only two other examples of a Hathaway blade bearing the triple comet mark and proposes that it was an indication of high quality which is borne out by inspection of the bayonet discussed here.

The blade is well preserved with clear marks and is still sharp.  The grip exhibits a rich dark patina and has a barely discernible hairline crack running length ways on one side which is not unusual for the age of this type of bayonet.  Otherwise, the bayonet is in good condition and retains much of its original gilt finish to the brass parts. The blade length is 11.5 inches (29.25 cm) and overall the bayonet is 17.5 inches long (44.5 cm).