Targes are shields associated with the warlike Highland clans of Scotland. They were an important part of the clan armoury and were used in substantial numbers from the late 16th century, until the middle of the 18th, when weapons were proscribed in the Highlands as a result of the Disarming Acts enforced by the British Government after the failure of the last Jacobite Rebellion in 1745/6. After this clans ceased to function as independent military organisations. The manufacture of targes started again in a small scale in the “Highland Revival” from the 1820’s as an adornment for Highland dress,  rather than as a weapon made in the traditional way, as the Scottish gentry developed a romanticised foppish historical interest in traditional Highland culture.

Today genuine targes dating to before 1746 are very rare. As an obvious and potent symbol of the warrior clansman they were destroyed or modified after this date for convenient non-military use, during which the rigours of climate conspired to ensure few survived. Those that have come down to us have done so largely by accident rather than intentional preservation, often by being stored and forgotten about in remote corners of Scottish houses and castles owned by clans loyal to the Hanoverian Crown, such as the Grants and Campbells, to be rediscovered in later times. The loyalties of these clans were under less scrutiny than their Jacobite neighbours who had their homes burned, their people exiled, and worse.

Targes were most effectively used at close quarters in conjunction with basket hilted swords and dirks by Highlanders in single combat, skirmishes and particularly in the battle tactic that became known as the “Highland Charge”. The targe discussed here was until recently stored in the attic of Dunrobin Castle in the northern Highlands of Scotland, which is the traditional home of the Earls and Dukes of Sutherland, first built in 1275.

Constructed from wood and leather, surviving targes have not resisted the rigours of time in the Scottish climate as well as other traditional Scottish weapons made of iron and steel. All of those examined by the writer at best may be lacking parts, suffer from rot, worm, fragility etc. At worst some resemble pieces of crumbling archaeology held together by the magic of museum restoration. In this respect, a period targe in “perfect” condition, is a suspiciously rare beast indeed. 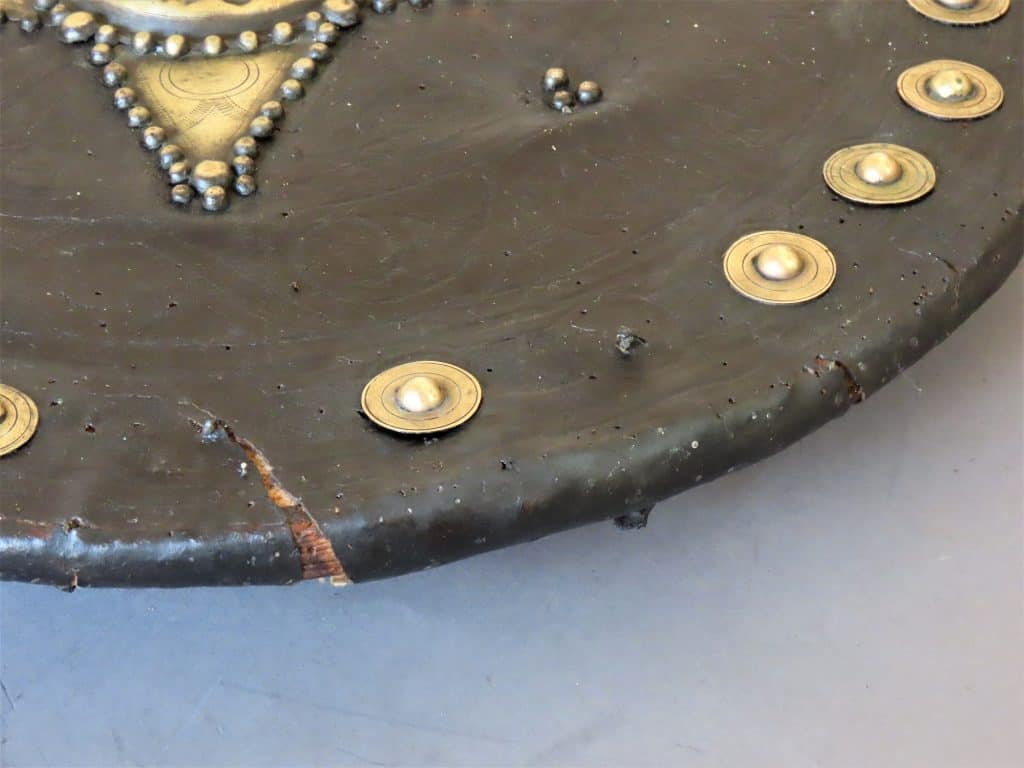 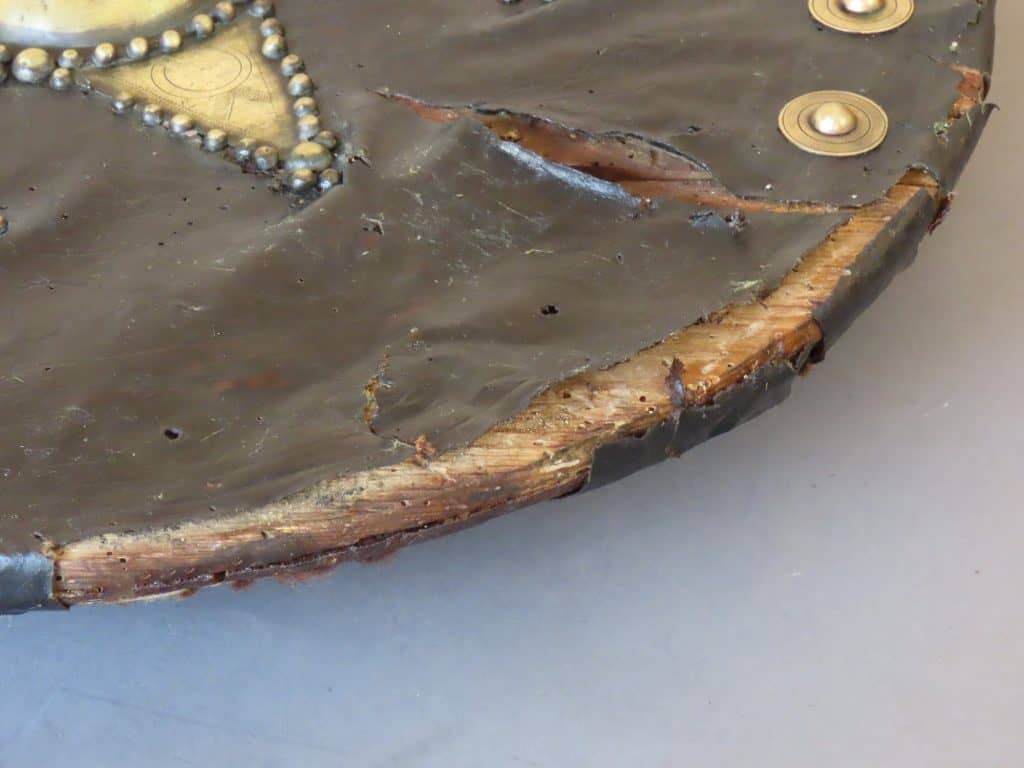 The targe discussed here dates to the second quarter of the 18th century. It is a typical example of Scottish Highland craftsmanship, formed in the traditional manner with a circular base of cross-plied hand-cut pieces of wooden board held together with nails and wooden pegs. The front is covered with a single piece of leather which is folded over the bevelled edge and secured at the back with a large quantity of small hand-made iron nails around the rim. A common problem is that forces of shrinkage impact on leather more markedly than on wood and a split has appeared in the leather cover exposing the boards beneath as can be seen in the photographs.

The leather is tooled with traditional Celtic designs of interlaced scrolls highlighted with the application of black and red paint, now faded, and difficult to see. A perimeter circle brass dome-headed bosses, smaller dome headed nails, and a four-pointed brass star formed in one single piece in the middle, have been applied. The arms of the star are decorated with incised circles and dog-tooth patterns. The middle is formed a central boss, now dented, with a screw threaded mount in the middle,  originally intended to house a spike, now absent. These features mark out the targe not only as a weapon but also as an example of Highland Gaelic art of which very little has come down to us, other than on contemporary powder horns, dirk handles and plaid brooches.

The back is covered with a sheet of roe deer skin, applied with the hair still on, giving some softness and protection to the forearm when the targe was in use. The leather hand grip remains as does two lines of nails, widening towards the elbow, which once secured the straps which formed a sleeve for the forearm. These are now missing and much of the hair of the deerskin has fallen out.

The amount of work and artistic skill required to make a targe of this type is easy to underestimate. The tooling of the leather is an art form in itself. In its original state the targe front was mounted with 148 separate pieces of handmade brass work. Some targes involved much more decoration than this and some were plainer. Clearly this amount of work meant that elaborate targes like this were an expensive possession for the owner, valued not only as a weapon, but also as a badge of high standing in clan society. Some targes had a long working life, indicated by repairs and updates to the decoration as fashions changed, and changes in the positions of the grips. 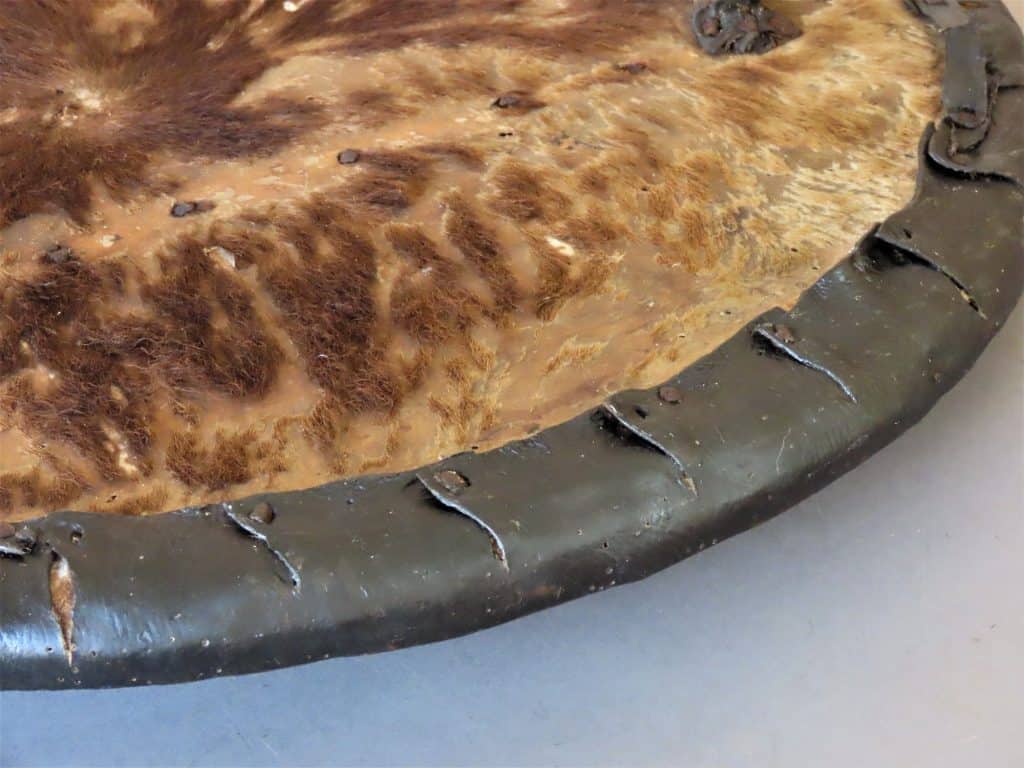 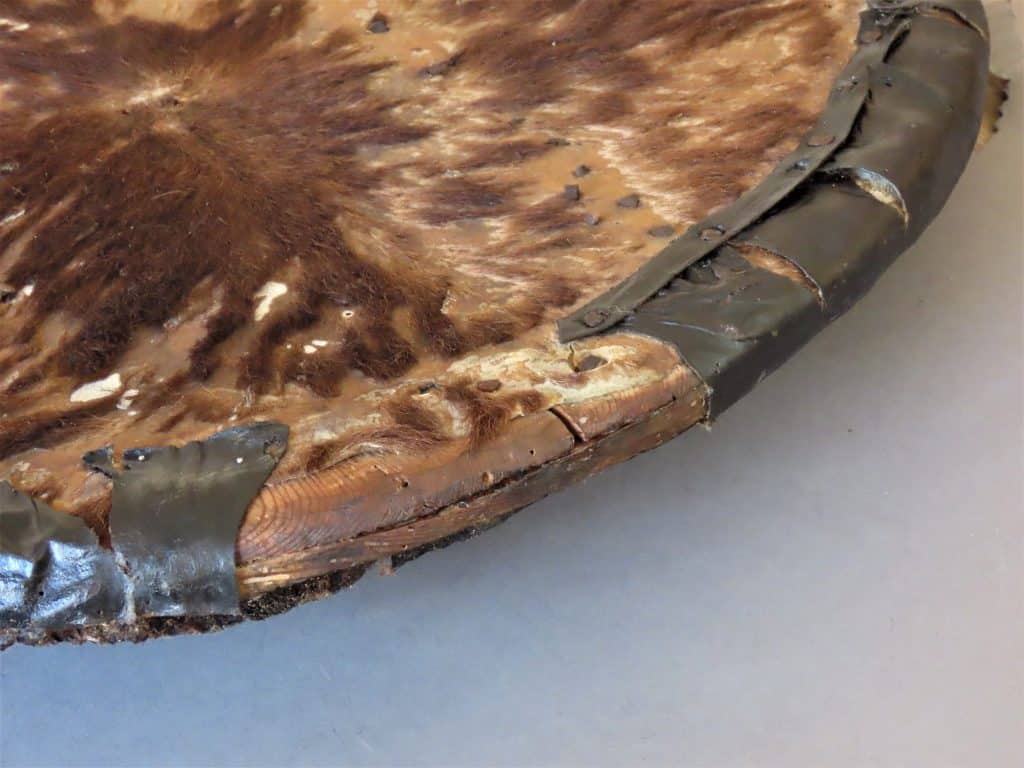 Some targes depicted in early 18thcentury portraits are shown with a spike screwed into the middle of the central boss. Only one targe is known today which still retains its original steel spike. When the targe was not in use the mounted spike would be a cumbersome feature if still fixed into the central boss. As a result, on a day-to-day basis, it was stored separately, sometimes in a leather sheath nailed to the back. Our targe was manufactured with a central boss threaded for a screwable spike. Some targes once made to take a spike retain a less obtrusive brass stud or other small feature screwed into the boss. This was intended to protect the aperture from debris and damage, and for aesthetic reasons, when the targe was not mounted with its spike.

The styles of decoration on targes differed markedly by region, maker and changed over time,  although the core construction method was generally the same. Our targe, with its distinctive perimeter brass bosses and pronounced central feature, together with the tooled Celtic scrolls highlighted with black and red colouring is similar in execution to one in the collection of Glasgow Museums and displayed at Kelvingrove.

A portrait of John Campbell of the Bank by William Mosman in 1749 shows the Hanoverian banker wearing a tartan kilt, jacket, sword, dirk with his pistol nearby. Clearly he was in favour with the government to be allowed to wear this attire just a few years after parliament banned the wearing of Highland dress in Scotland. He presents himself as a warrior chieftain in the tradition of his ancestors. At the time he was Cashier, equivalent to CEO, of the Royal Bank of Scotland, and guarded its interests when the Jacobites were in Edinburg a few years before. Interestingly, the targe hung on the wall behind has the same pronounced perimeter bosses seen on our targe.

Overall, the targe is in fair condition, and similar in this respect to the better preserved 50% of its surviving contemporaries. The leather to the front is complete although shrunken and split. The leather backing on many surviving targes is often absent presumably because it has become completely detached due to shrinkage, deteriorated condition, and been disposed of at some time. The targe is 19.25 inches (49 cm) in diameter.