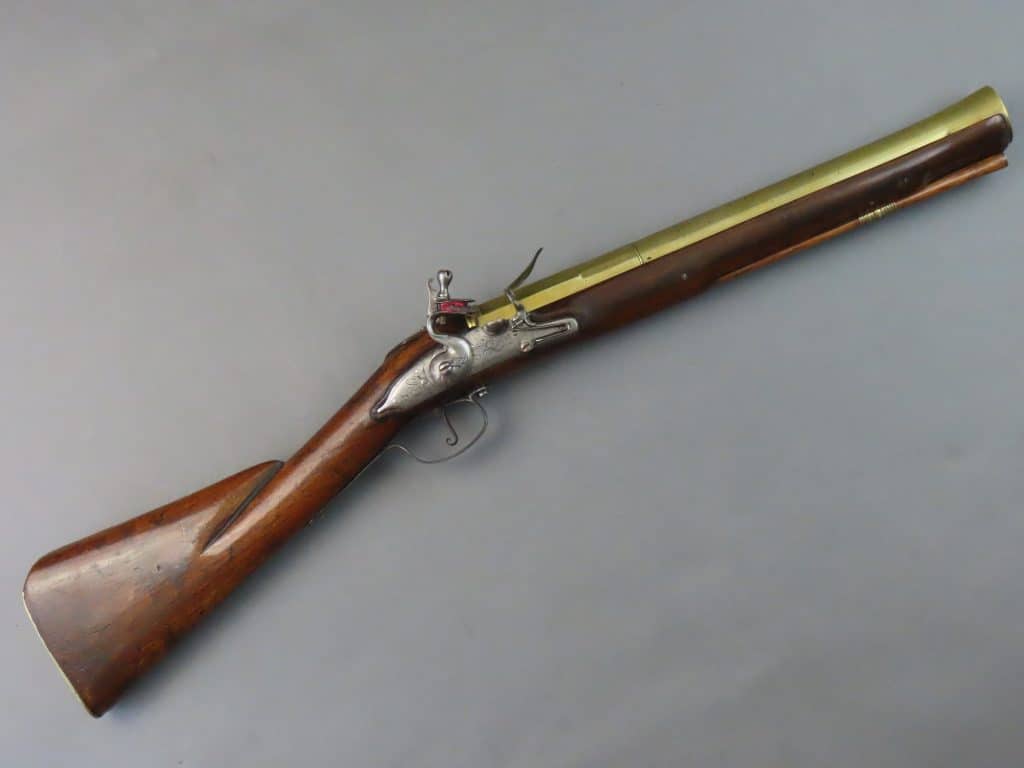 A Flintlock Blunderbuss by Robert Silke of London circa 1680

A scarce late 17th century English blunderbuss by Robert Silke. This gunmaker was part of the notable dynasty of gunmakers by the name of Silke that worked in London. The earliest records of this name extend back to 1610, and it was  heavily represented in the 17th and into the 18th centuries. Robert Silke was a prominent gunmaker and this blunderbuss is a fine example of his work.

The blunderbuss is mounted with a heavy brass barrel of octagonal section at the breech marked on one of the flats with the initials of Robert Silke as the barrel maker, plus the Proof Mark of the London Gun Company and View Mark both under a crown. An arched rib reinforces the breech from which the iron tang extends and beds into an apron moulded into the stock. Beyond the octagonal flats towards the muzzle the barrel is shaped  in hexadecagonal section for a short distance terminating with an engraved parallel-lined band after which the barrel is of smooth rounded section gently narrowing then widening towards the muzzle.

The bowed lock has a nippled tail bedded into a moulded apron on the stock. The cock, the area behind it, and in front, is engraved sparingly and attractively with leafy scrolls. The maker’s mark of R SILKE is engraved underneath the scroll in front of the cock. The lock is secured to the stock by three screws with dome heads visible on the reverse side. The trigger terminates in a backward scroll, and the trigger guard is of iron, underneath which the head of the screw which secures the barrel tang to the stock is visible. The stock is of walnut mounted with a brass butt plate secured to the stock with seven iron tacks flush with the surface of the plate. The tapered ramrod has a brass cap at the wide end and is mounted with an iron worm at the tip. The ramrod is secured to the stock by a tube bored into the stock and a single ramrod pipe.

The absence of a side plate, and tail pipe for the ramrod, combined with the method of securing the butt plate with flat headed iron tacks, together with the entry method of the barrel tang screw into the stock from underneath, are, amongst other features, indicative of a late 17th century date for the blunderbuss.

Following the Restoration of the monarchy in England in 1660 blunderbusses increased in popularity in civilian life and in the Services, particularly the Navy. A manuscript dated 1684 shows that ships were entitled to a number of blunderbusses represented as a proportion of the number of cannon employed on board.

It is unlikely that the signature on this blunderbuss is that of the second and only other recorded Robert Silke, who was the son of the first described above, due to his short career, the absence of many surviving works attributed to him, and the fact that he predeceased his father. He was apprenticed to his father in 1686, made free in 1693 and was deceased by 1696.  Possibly he worked in the Minories with his father for a short time after being made free and is recorded like his father as  a Contractor to the Ordnance for a short time in 1694/5.