A Fine Pair of Scottish Scroll Butt Pistols which belonged to Anthony Adrian Falconer, the 7th Lord Falconer of Halkerton, later the 5th Earl of Kintore, by Thomas Murdoch of Doune and Leith, circa 1766 to 1778

An attractive and rare pair of 22 bore traditional all steel Scottish Scroll Butt pistols by Thomas Murdoch of Doune. These pistols are typical examples of the high standards represented by the Doune gun makers. The type was popular with Scottish nobility serving in martial capacities and officers in Scottish Highland regiments on service in North America in the Revolutionary War period and in Europe. These pistols were commissioned by a Scottish aristocratic family with strong connections with Holland. 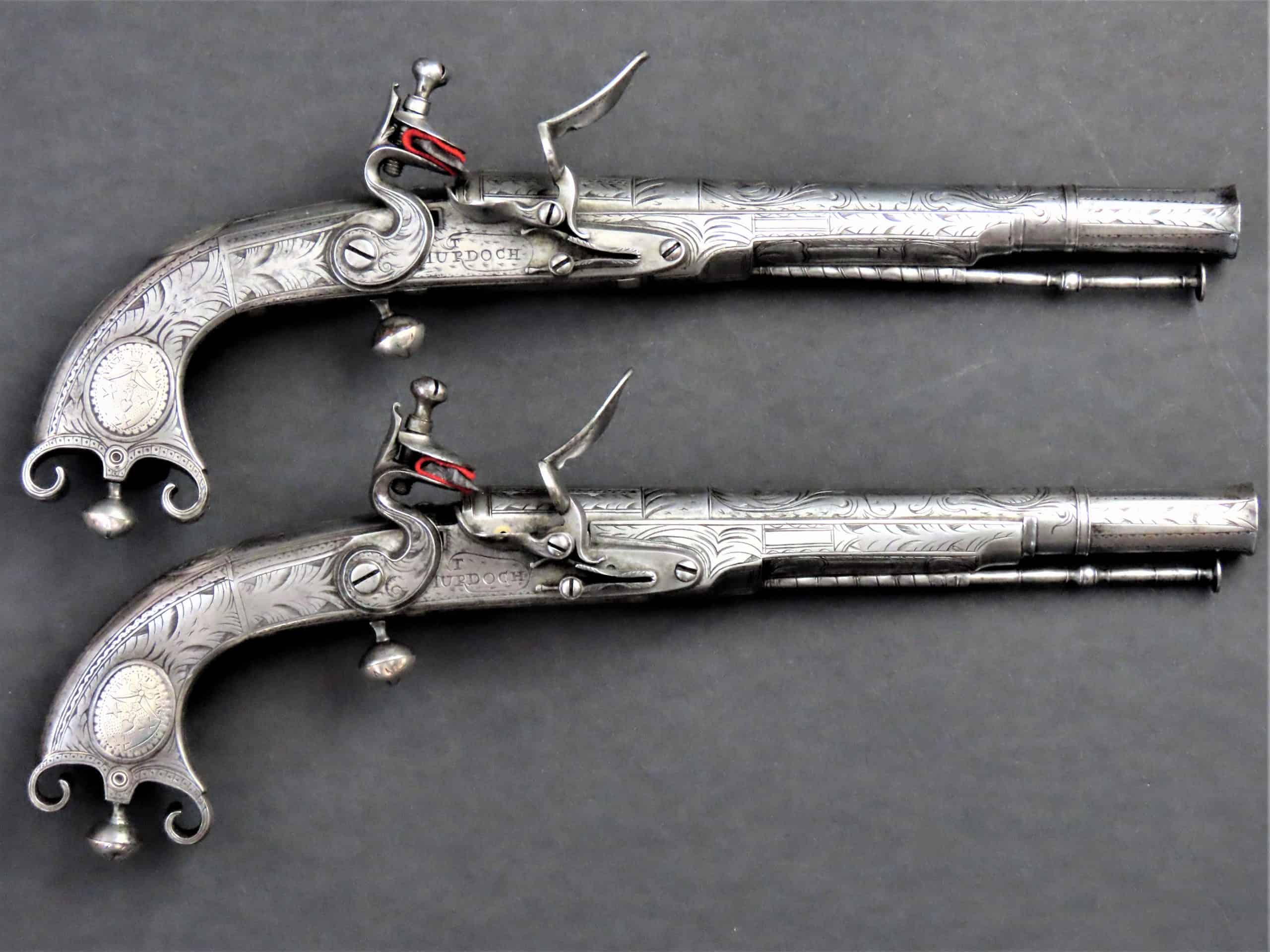 The Scroll Butt Doune pistol profile is unique with its flowing contours and rams horn terminals. The decorative foliate style of engraving and silver inlay applies to the barrel, the the lock plates behind the cocks, and on the fore ends, spines and undersides of the pistols. The pistols illustrated here are typical examples. Both cocks, and the areas behind them on the lock plates, are engraved with foliage. The spines of the butts are engraved with parallel sets of lines infilled with chains of chevrons, scrolls and waves. The fore ends are engraved with scrolls, acanthus leaves, linear designs and chevrons on four planes. A silver roundel is bedded into the spine of each pistol, just behind the barrel tang screw, which contains a stand of arms alluding to the official capacity of the owner. 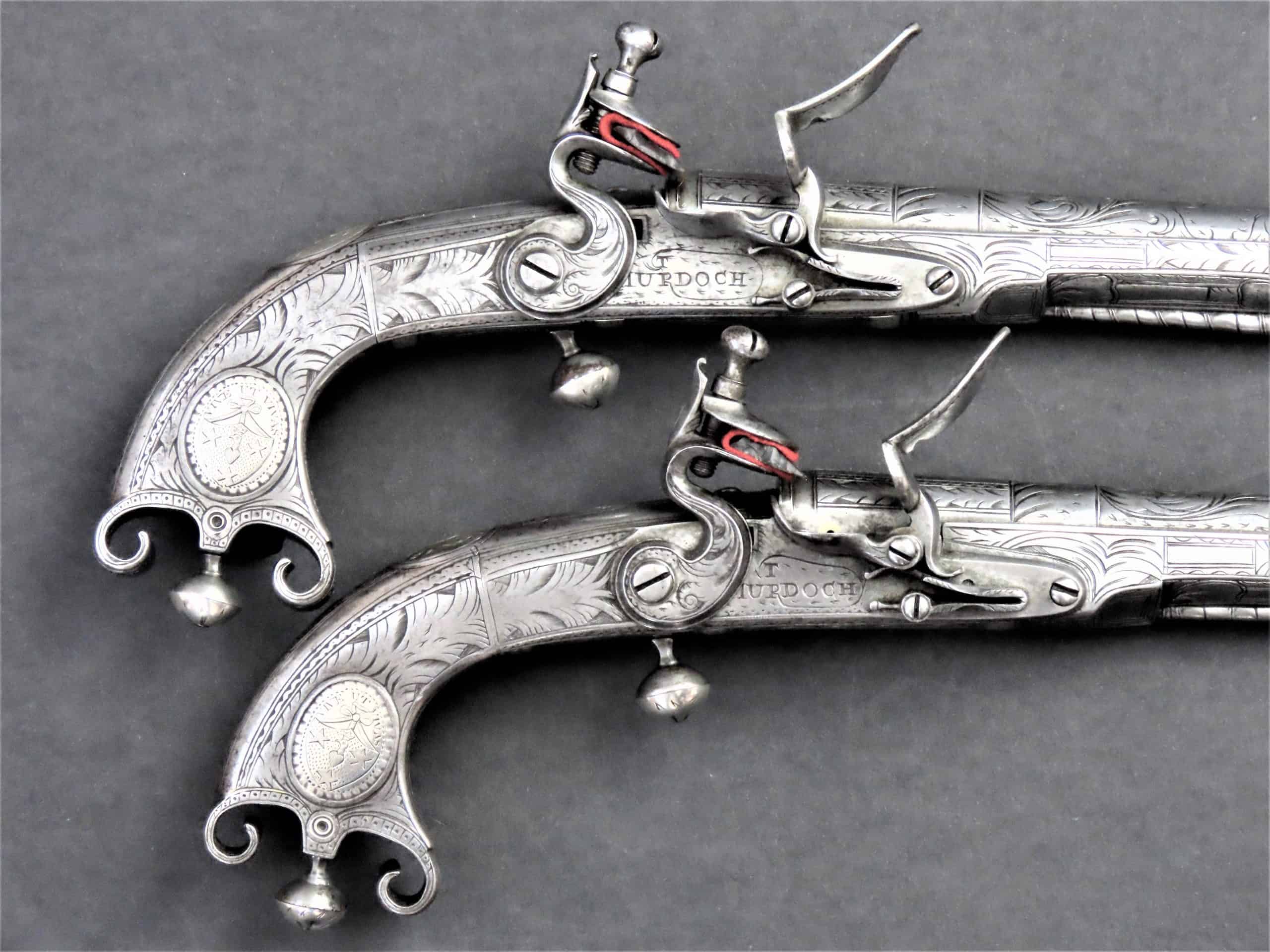 Underneath the locks the space is decorated with fine linear engraving of scrolls, parallel lines and waves, crossed by three bands of engraved silver in typical Doune manner. The base of each butt is centred with a silver button between the scroll butt terminals above which on each side a silver escutcheon is mounted. The belt hooks are attached to each stock by a morticed roundel and a screw. These slender hooks are engraved at the base and curl slightly outwards towards the ends. The four stage barrels have fluted sections near each breech and flared muzzles of octagonal section with the sides engraved with fine scrolls. The middle sections of the barrels are rounded and boldly engraved with scrolls and foliage.  The button triggers and prickers are formed with cups of silver on the outside with lines radiating from the peened tang ends brazed onto a steel base. The ramrods are original with turned baluster tips. The locks are of typical “Highland” form with a horizontal sear extending through each lock plate which holds the cock in the half cock position. The pans are bridled and the exterior of the frizzens are shaped in peascod form. 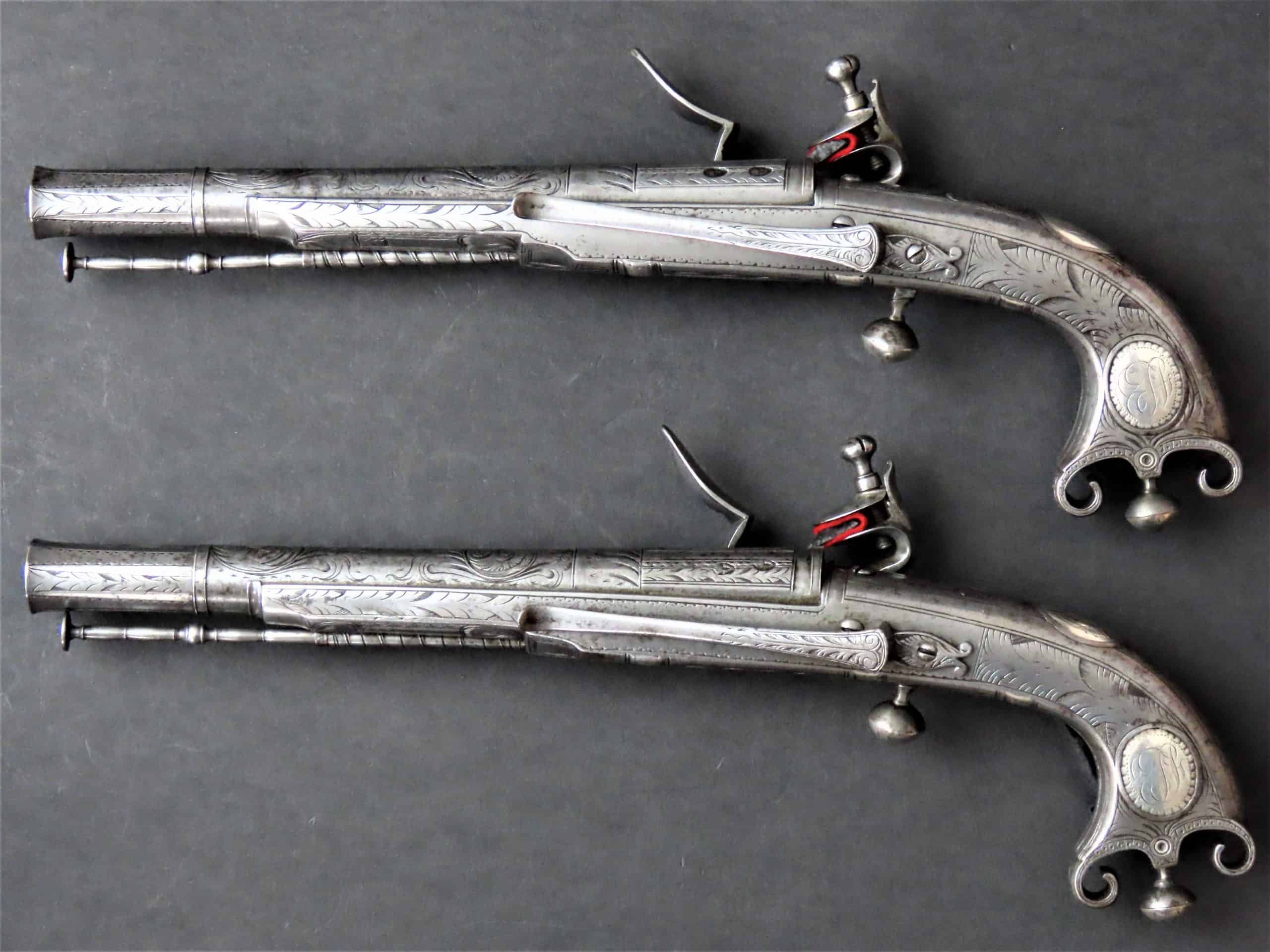 The lock plates are each signed “T” with “MURDOCH” beneath, with a downward pointing scroll extension to the right hand leg of the letter “R”, which extends to the front of the name then upwards and back to curl around the letter “T”, in typical form for the signature of this maker. Two proof marks are stamped into each barrel near the breech consisting of a letter “V” with a crown above in raised relief inside a depressed oval with a serrated edge. This form of marking has been noted on some other pistols by this maker. It is unusual to see proofed Scottish barrels in the 18th century. The marks are most certainly “Private View” marks stamped by the proof houses of London or Birmingham sent there privately by Thomas, as a non-member of each company, for proofing to broaden the attractiveness of his pistols to people that placed greater importance on proofed barrels.

Thomas Murdoch’s baptism is recorded as of 9th May 1735, the son of John Murdoch and Margaret McMien in Tenemon. His marriage is recorded on 18th December 1766 to Ann Buchanan in the Parish of Port of Menteith. Both events are detailed in the Kilmadock Parish Register. This is an administrative area which recorded births, deaths and marriages in the Doune region of Perthshire which is adjacent to the Central Scottish Highland region. Some recorded Doune gunmakers were interred at Kilmadock burial ground which is a short distance from the town. 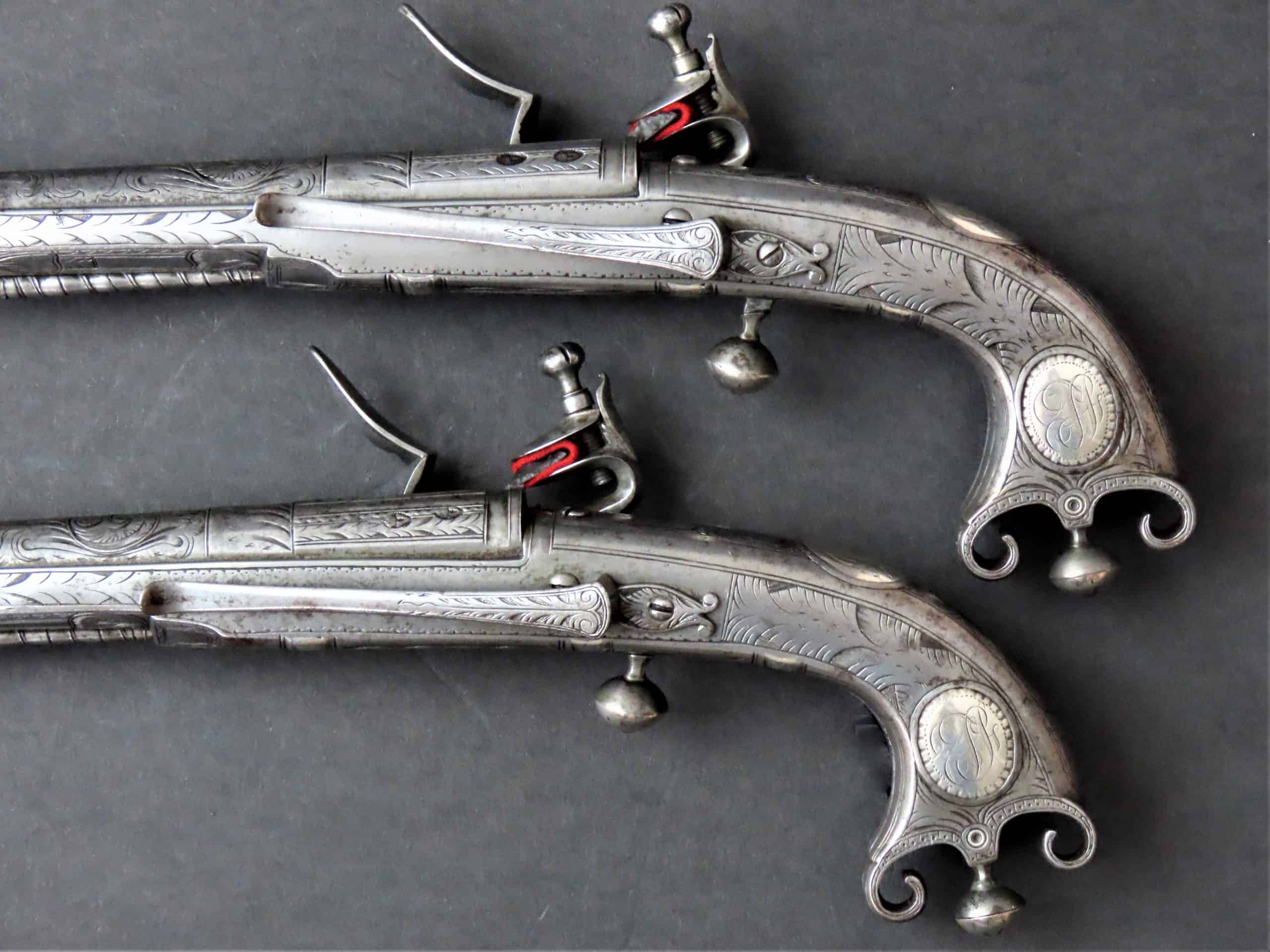 Thomas Murdoch was trained in Doune and started his gun making career there. In 1774 he is recorded as “Gunsmith in Leith”. Leith was the main port for Edinburgh and Thomas was based at “Leith Walk”. Presumably he moved his business from Doune to Leith, to take advantage of mercantile opportunities, as demand for high quality and expensive traditional Doune style pistols shrank in the Highlands due to the disarming measures taken by the Hanoverian government after the failure of the 1745 Rebellion. Previously the Highland Clans had been an important market for the Doune gun makers. During this period some other Doune based gun makers, like Thomas, moved their businesses elsewhere to supply other markets, particularly the military in garrison towns such as Perth and Stirling. 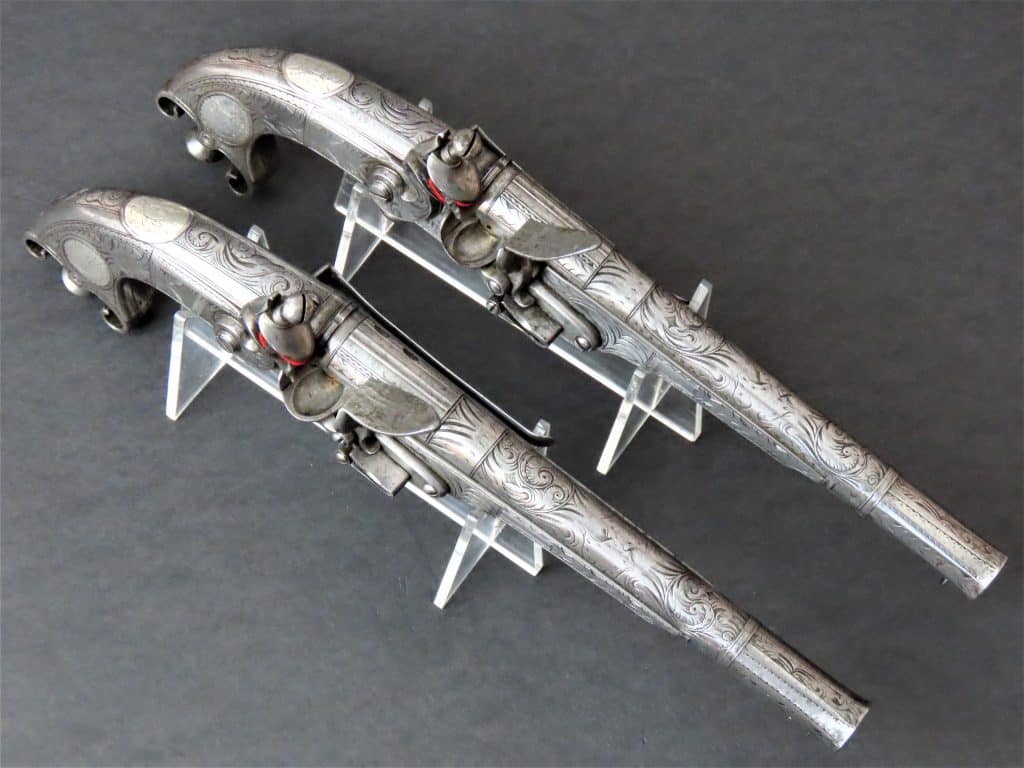 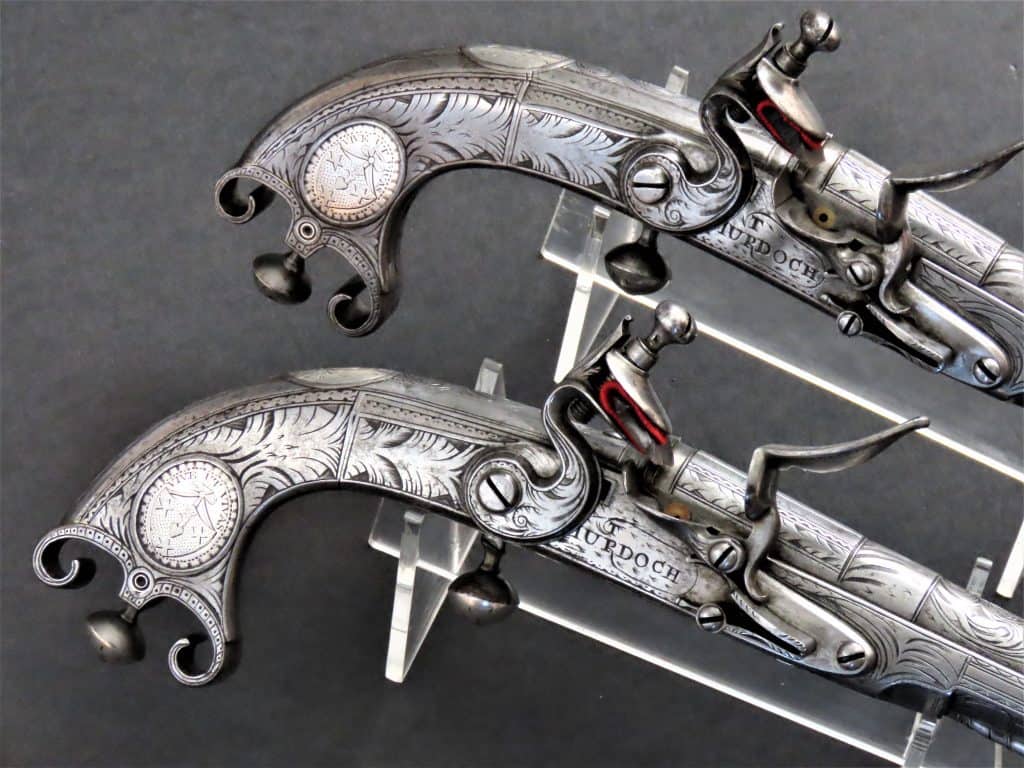 According to the Scottish Statistical Account a pair of pistols made by Thomas Murdoch, “a tradesman taught in Doune”, were presented by the City of Glasgow to the Marquis de Bouille in 1784 (see Charles E Whitelaw, “Scottish Arms Makers”,  page 43). Thomas is recorded as active in Leith in 1774, 1780, 1782 and finally in 1790.  It seems he was succeeded in the family business by his son William who is first recorded in 1793 at Leith Walk. Presumably William inherited the business and its premises from his father. The later pistols made by Thomas Murdoch sometimes incorporate the place of production as “Leith”. 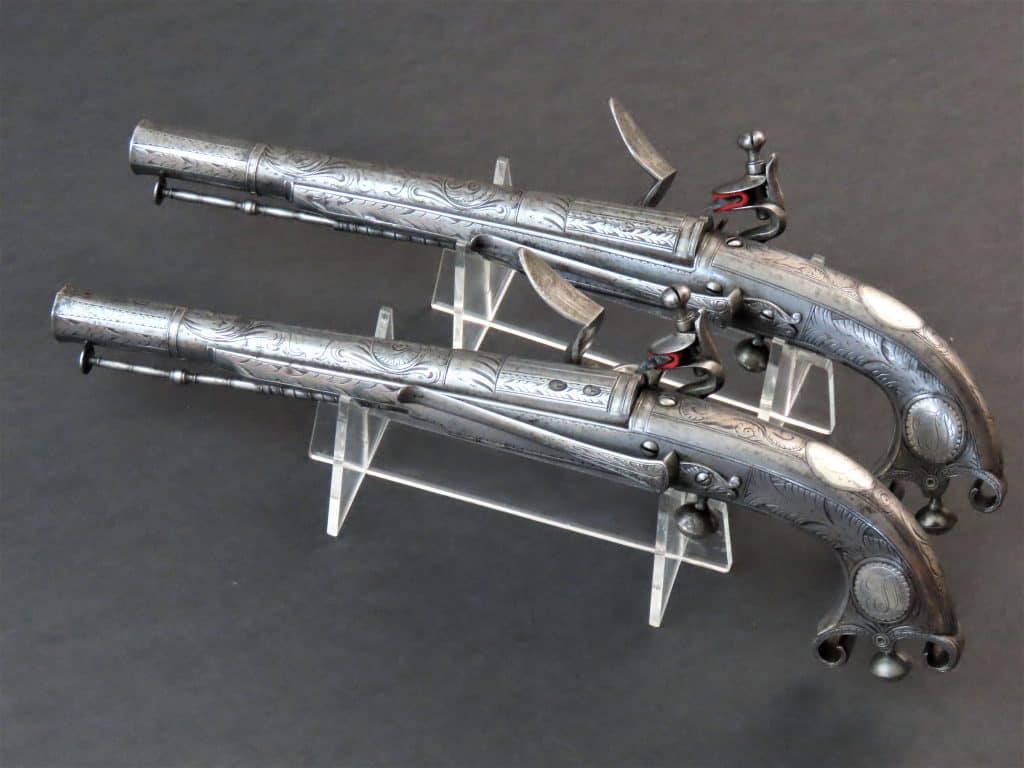 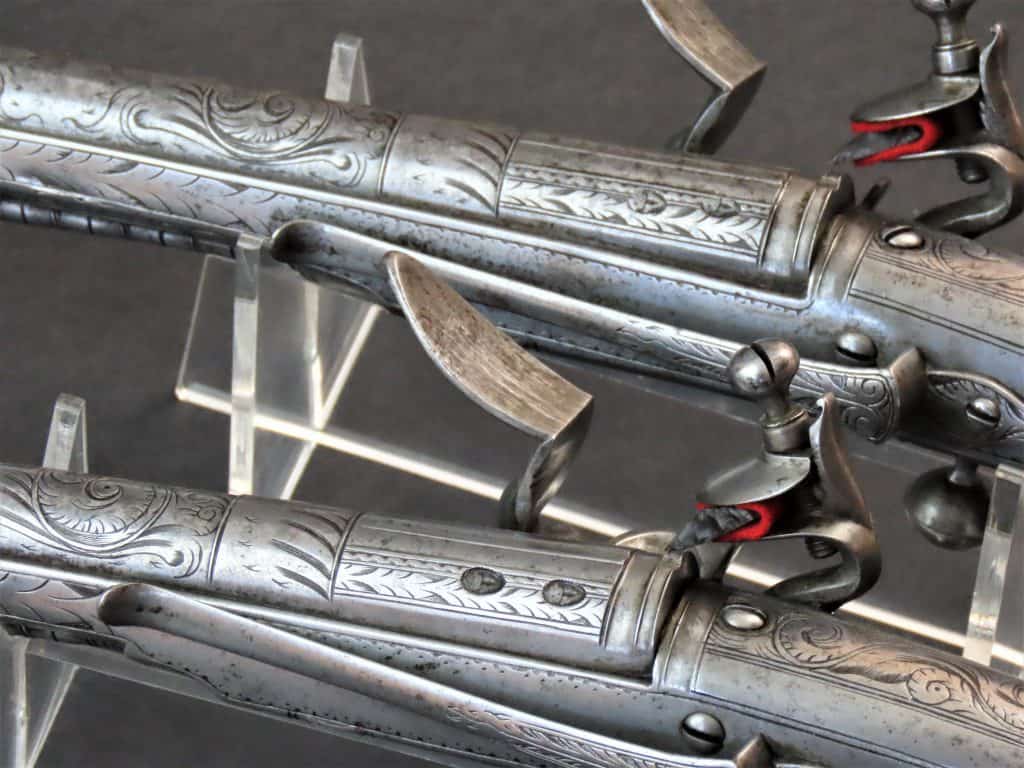 The pistols are effective weapons and a celebration of the marriage partnership between the 5th Earl and the Countess of Kintore. The escutcheon on one side of the pistol stocks are marked with the crest of Christina Elisabeth Sichterman, the Countess of Kintore (1738-1809), who was the Dutch daughter of Jan Albert Sichterman of Groningen, who held the official appointments of Intendant General of Dutch Settlement in the East Indies and the Fiscal of Bengal towards the middle of the 18th century. Christina entered the Scottish peerage in 1766 when she married Anthony Adrian Falconer (1742-1804), the eldest surviving son of William Falconer, the 6th Lord Falconer, a Colonel in the Dutch army, and Rembertina Maris Idiking of Groningen. His paternal grandmother was Margaret Keith, daughter of the 2nd Earl of Kentmore, and his  grandfather was David Falconer, 4th Lord Falconer of Halkerton. 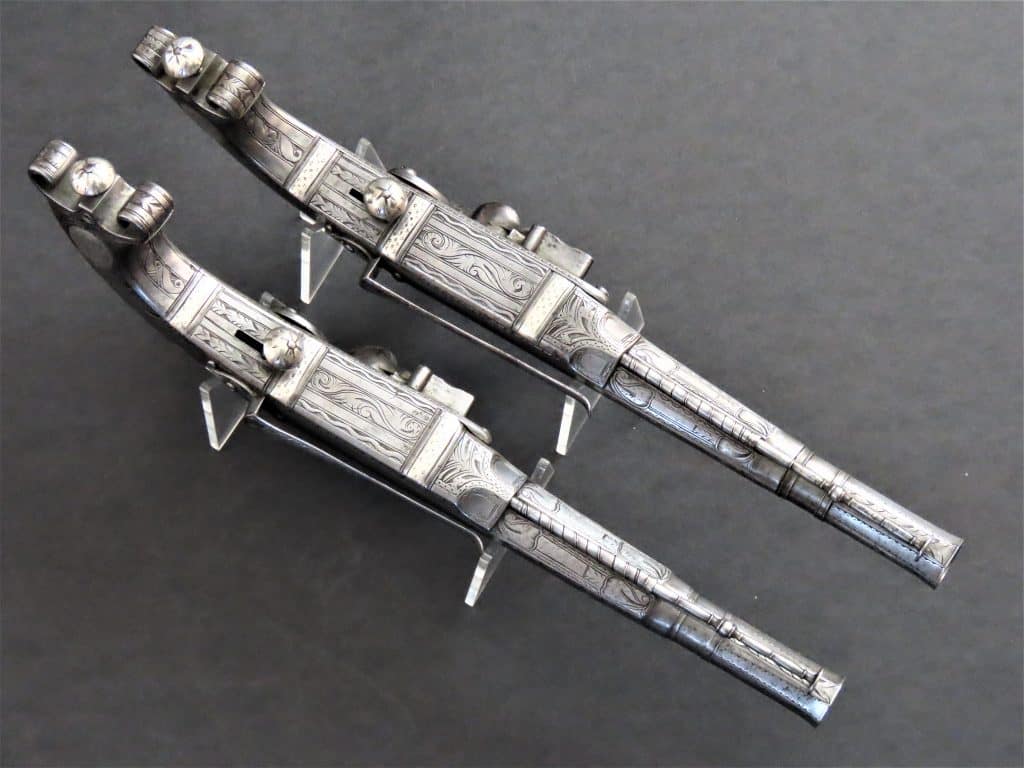 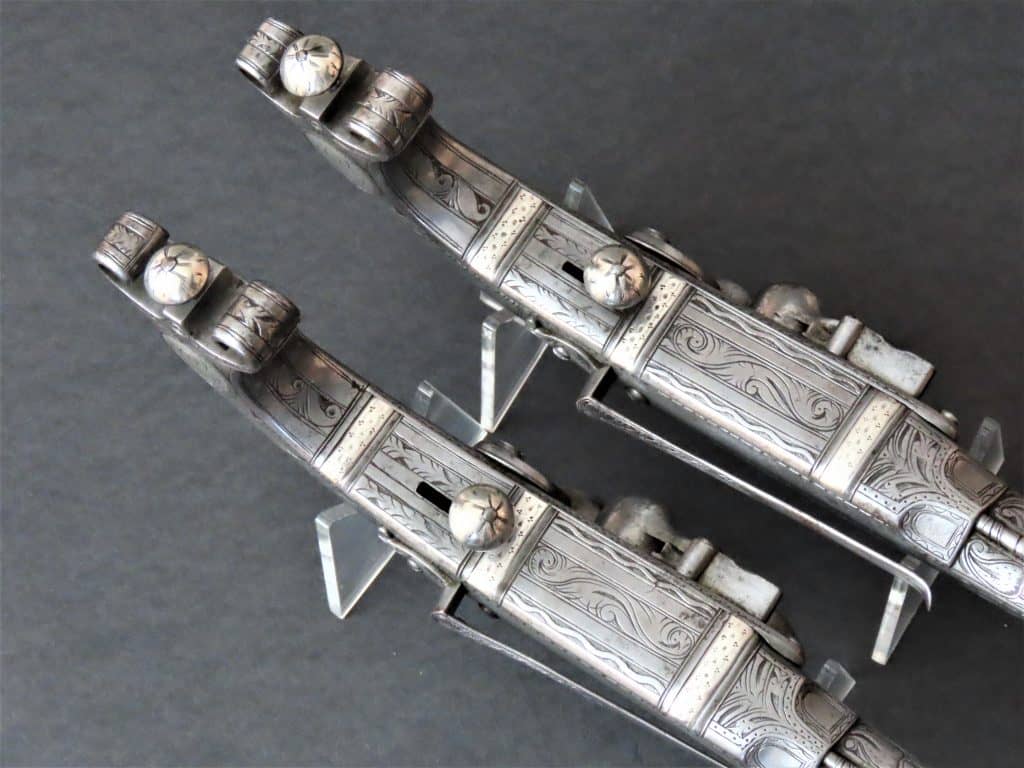 In 1776, on the death of his father, Anthony succeeded as the 7th Lord Falconer of Halkerton. The Falconer arms are engraved on the escutcheons on the reverse side of the pistol butts each centred with a falcon hatching from a heart. 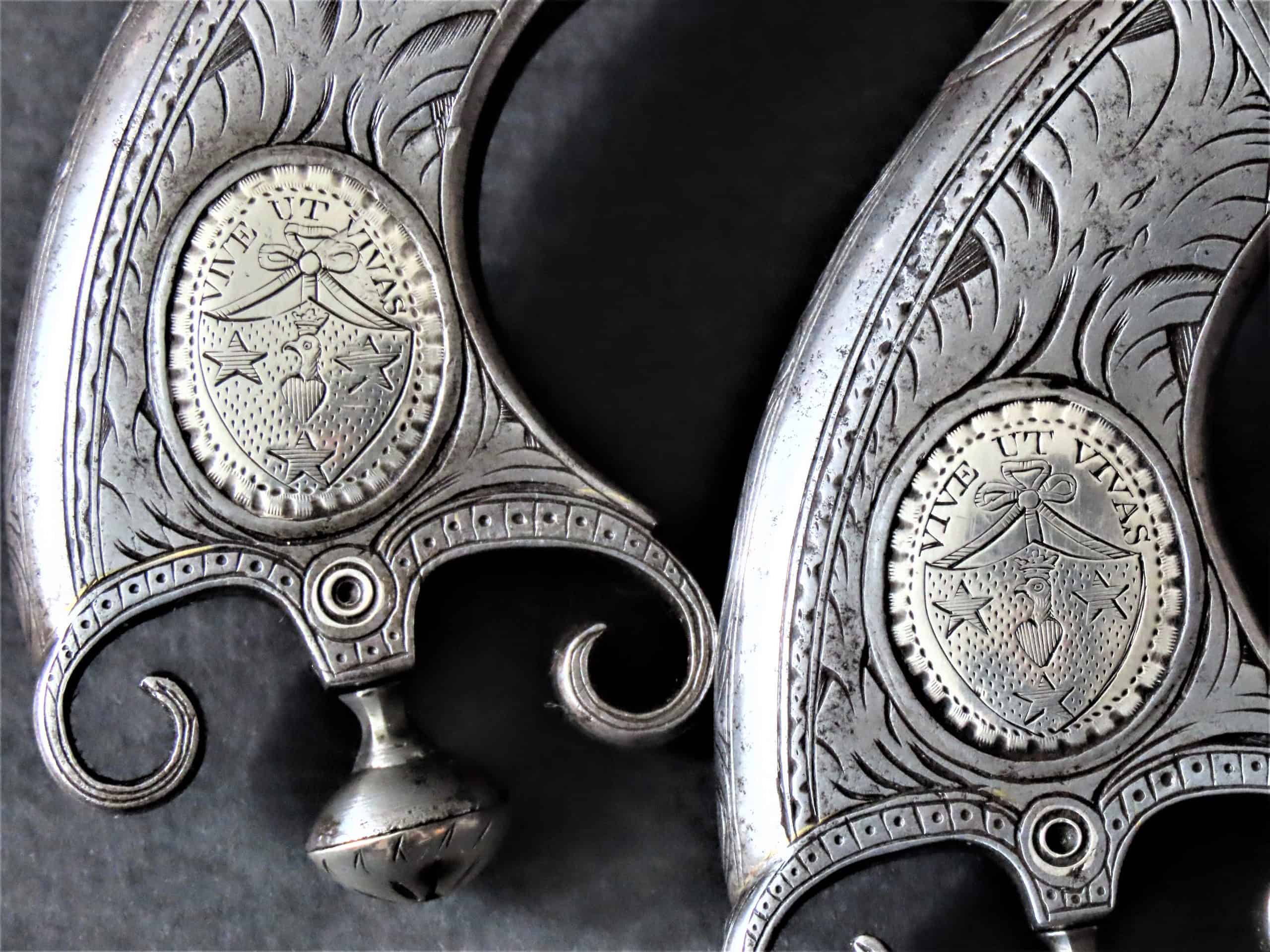 In 1778 Anthony became the 5th Earl of Kintore. This title was acquired because of the punitive re-assignment of aristocratic estates in Scotland as a result of the Jacobite rebellions earlier in the century. In 1761, on the death of William Keith, 4th Earl of Kintore, the earldom should have passed to his cousin, George Keith, 10th and last Earl Marischal. However, he had been attainted for his part in the 1715 Jacobite Rebellion and his inheritance of the earldom of Kintore had been permanently suspended, to be inherited by Anthony, the heir general of the 4th Earl of Kintore, on the death of the 10th Earl Marischal on 28 May 1778. 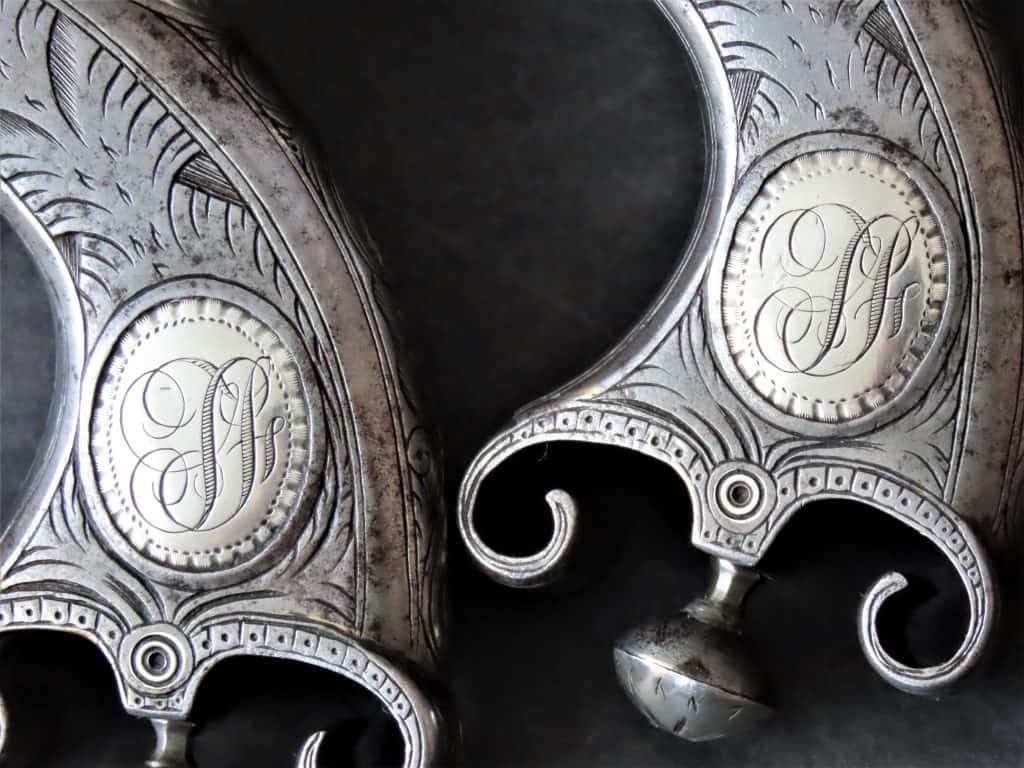 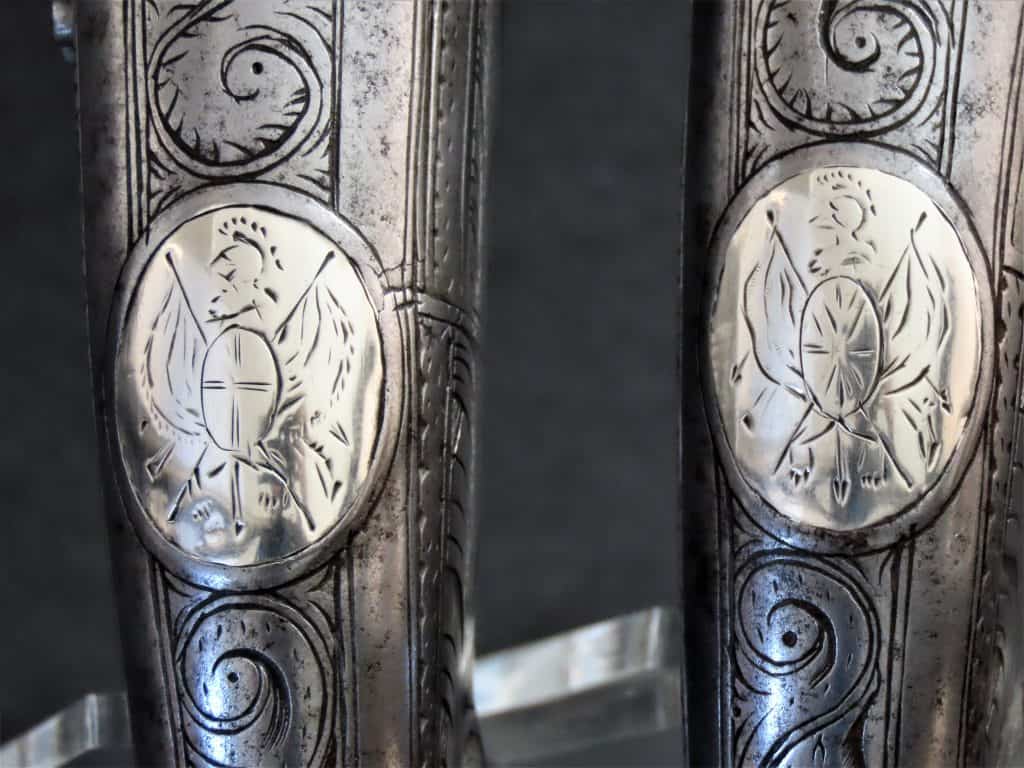 On his assumption of the Earldom of Kintore Anthony, by then living in Scotland, changed his surname to Keith-Falconer and inherited the estates of Kintore, Hallforest Castle, and Keith Hall, thus establishing himself as one of the most prominent aristocrats in Scotland. From 1794 to 1804, he served as Lord Lieutenant of the Scottish county of  Kincardineshire, the British monarch’s personal representative in this lieutenancy area of the United Kingdom. 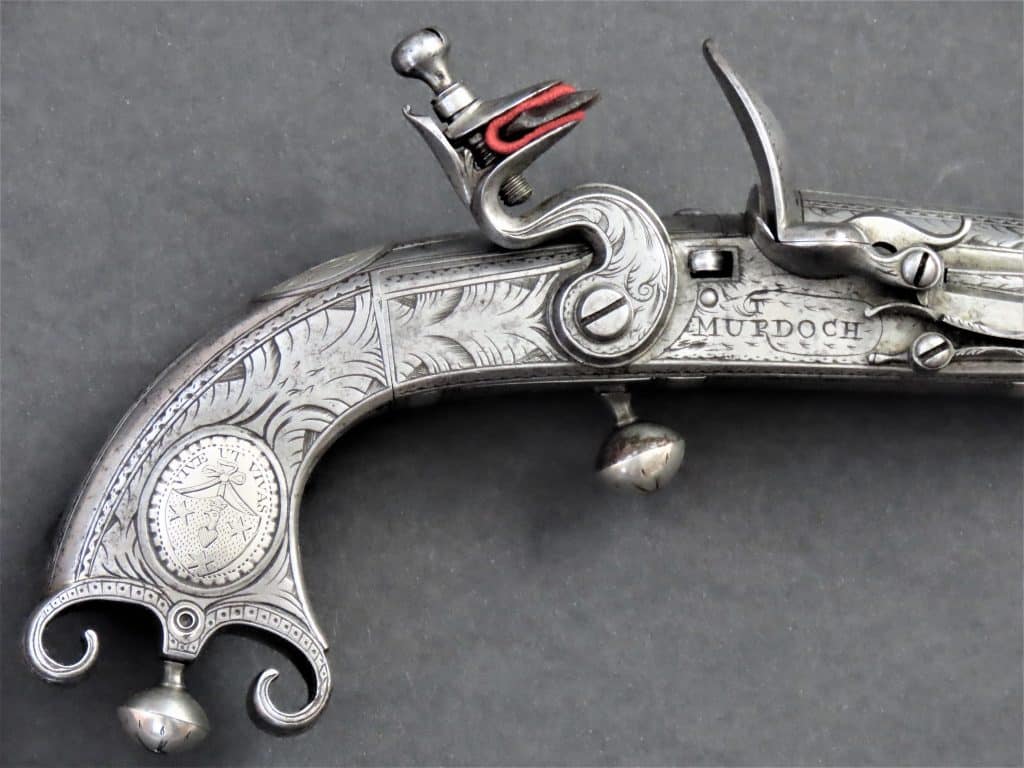 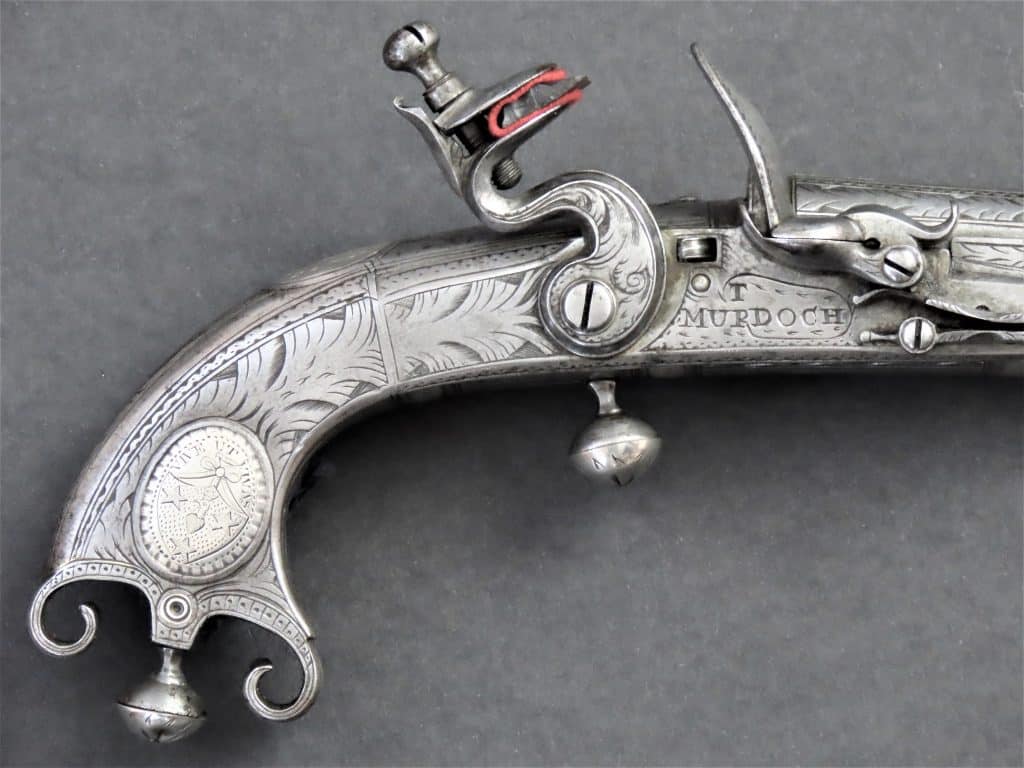 The presence of the Falconer Arms indicates that the pistols were made sometime between Anthony’s marriage in 1766 and his assumption of the Earldom of Kintore in 1778. Whilst the Halkerton title was formally adopted by Anthony in 1776, he may have used the arms in an informal manner before then as was sometimes the Scottish custom. The pistols could have been made by Thomas Murdoch when his business was based in Doune or from circa 1774 when he was based in Leith.

The overall length of each pistol extremity to extremity is just under 13 inches (32.75 cm). The barrel lengths are just over 8 and 1/8th of an inch (20.75 cm) long. The pistols are in fine original and uncleaned condition, with a matted grey patina all over with minor surface blemishes.