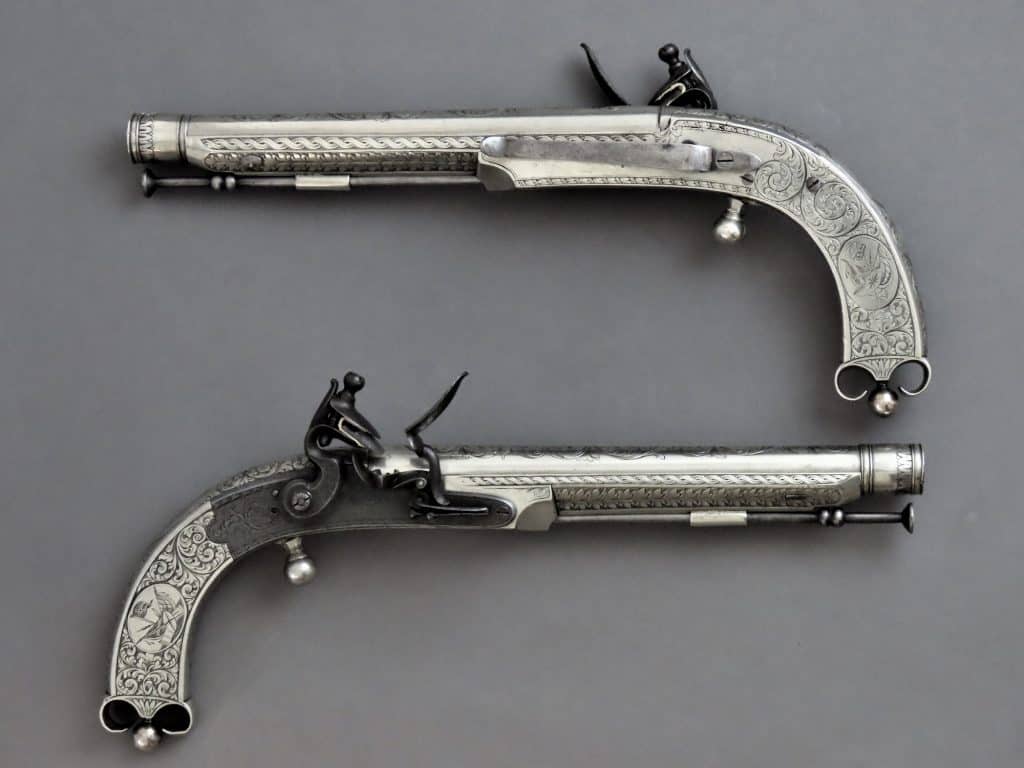 An exceptional and rare pair of 24 bore Scottish Scroll Butt pistols by Murdoch made of Paktong with blued steel locks, belt hooks and ramrods. The pistols date to the early 19th century and were most likely a private commission by an officer serving in a Scottish Highland regiment. The pistols are in wonderful original condition, with crisp working parts, and sumptuously engraved in the traditional Scottish “Celtic” manner.

The maker, John Murdoch, is recorded as a “Highland Pistol maker” employed in the Small Gun Office of the Tower of London, from 1781. He retired on a pension at the age of 74 in 1822. The production of Paktong in Europe, and Britain as “German Silver”, and its variants, post dates the death of John Murdoch and until then this material had been an expensive import from China. 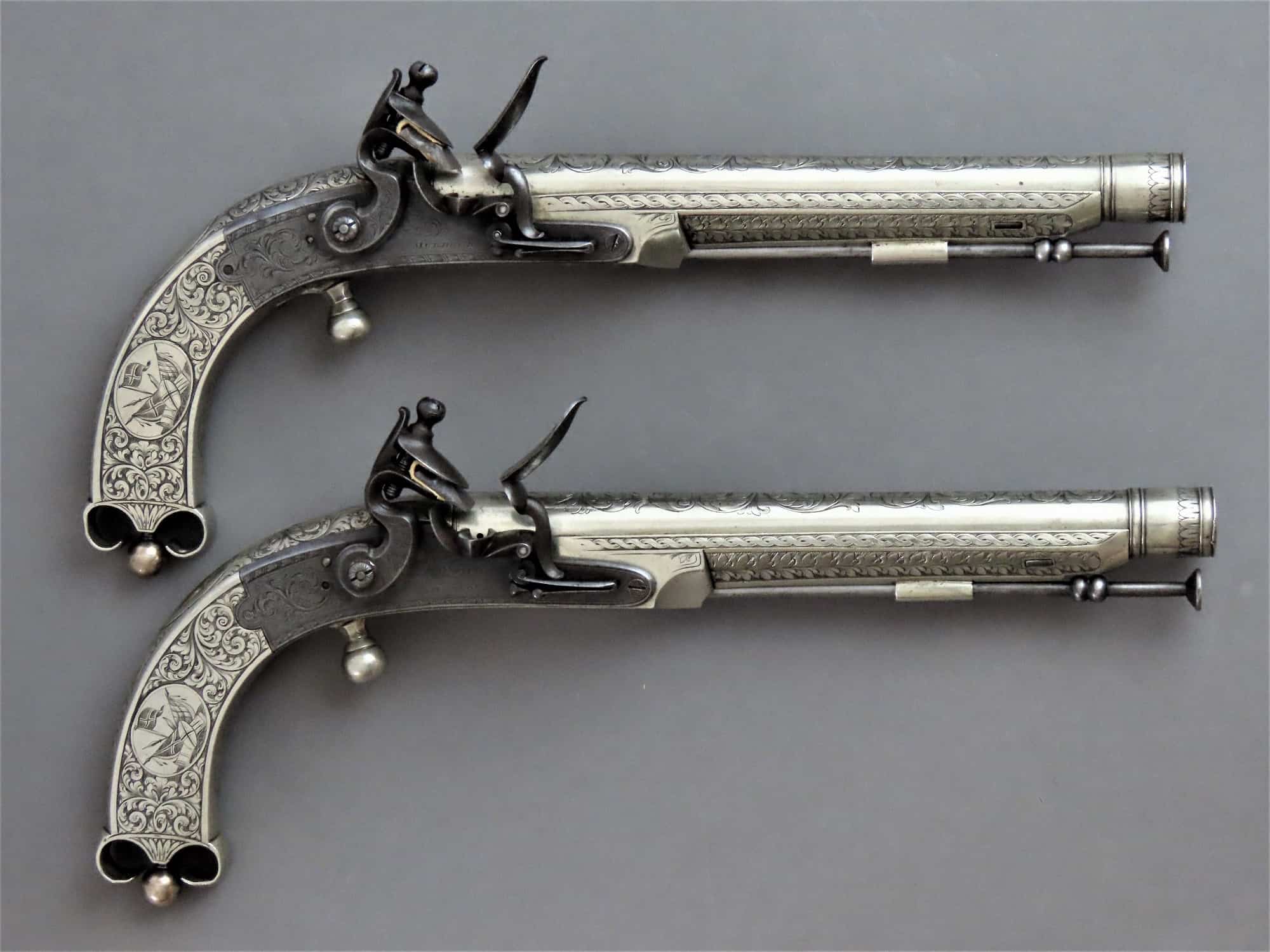 The style of the decoration of these pistols has its roots in Doune in Scotland and the gun-making trade which flourished there from the late 17th century to the late 18th. It is thought that the John Murdoch that made these pistols was the son of the first John Murdoch that spent all of his working life making pistols in Doune from the mid-18th century until his death in Scotland in 1812. 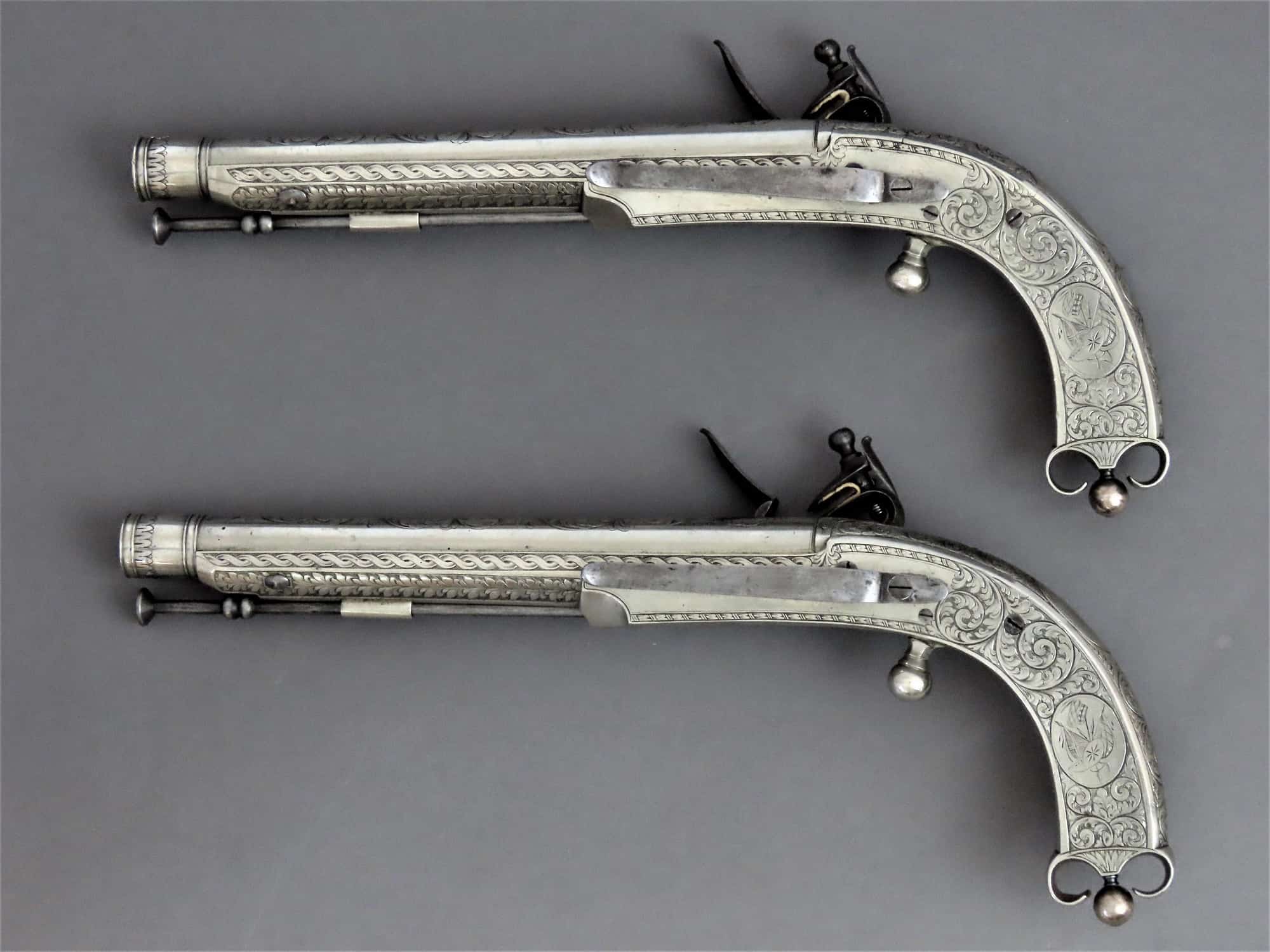 It seems very feasible therefore that the son of this maker, who was probably trained in Doune, should move to London and continue the family business of supplying commissions for the military by adapting the traditional Doune style to the evolving fashions of pistol making at the time.

These pistols typical examples of the high standards of workmanship represented by the London gun makers and are comparable with the highest quality output of contemporary gun makers producing pistols with more familiar wooden stocks with silver mounts for the London market. 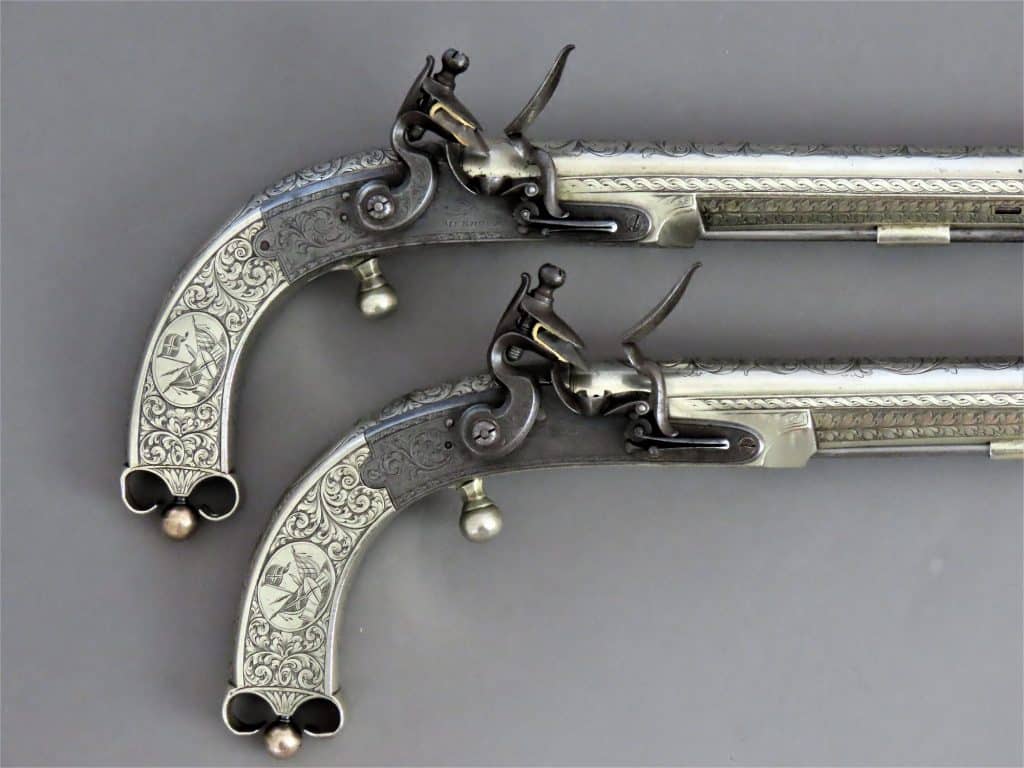 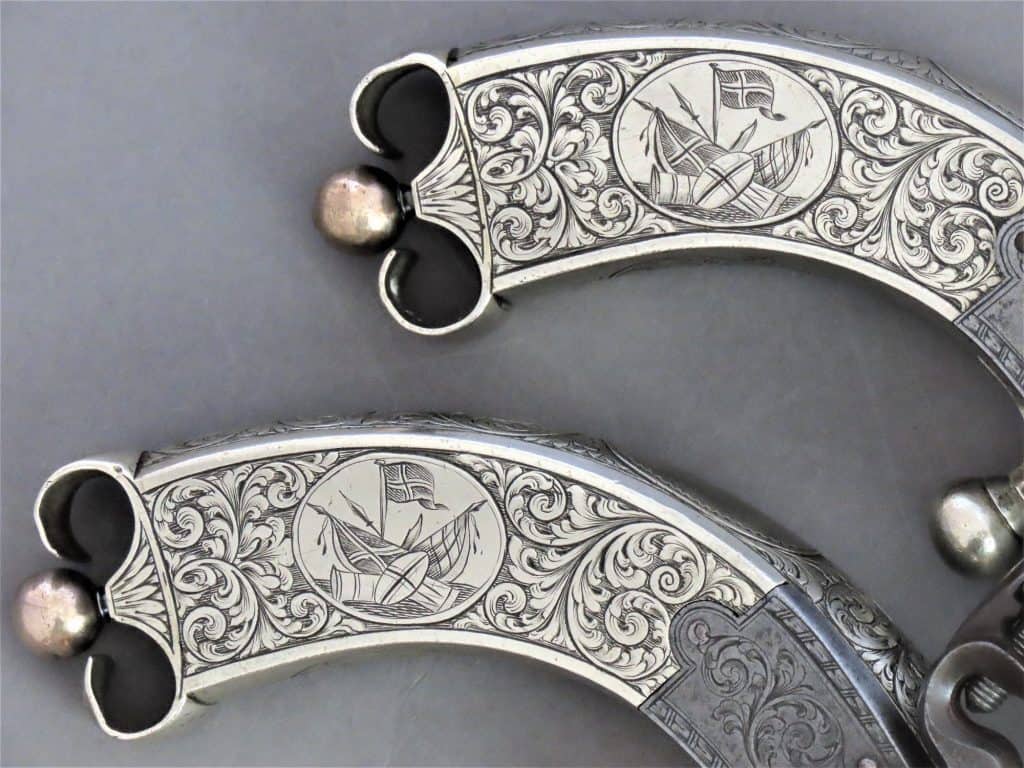 Scroll Butt pistols made in Doune had been popular with officers in the Scottish military serving abroad in Europe and in North America. Two pairs are known with associations with the American Revolutionary War which were made by John Murdoch. The first is the “Pitcairn Pistols”, credited with discharging the first shot of the conflict. By repute they belonged to Major John Pitcairn, an officer in the British Royal Marines who led the advanced guard of the raid on Lexington and Concord, Massachusetts, on 19 April 1775. His pistols were captured after his horse threw him during the action at Fiske Hill near Concord and bolted, with his pistols, into the American lines. These are now displayed in the Lexington Historical Society collection.

The second pair, recently sold through our gallery, belonged to Lieutenant-General Hugh Percy, who served with distinction in the American Revolutionary War and was Commanding Officer of the relief column at the Battle of Lexington and Concord and saved the retreating British forces from total defeat. 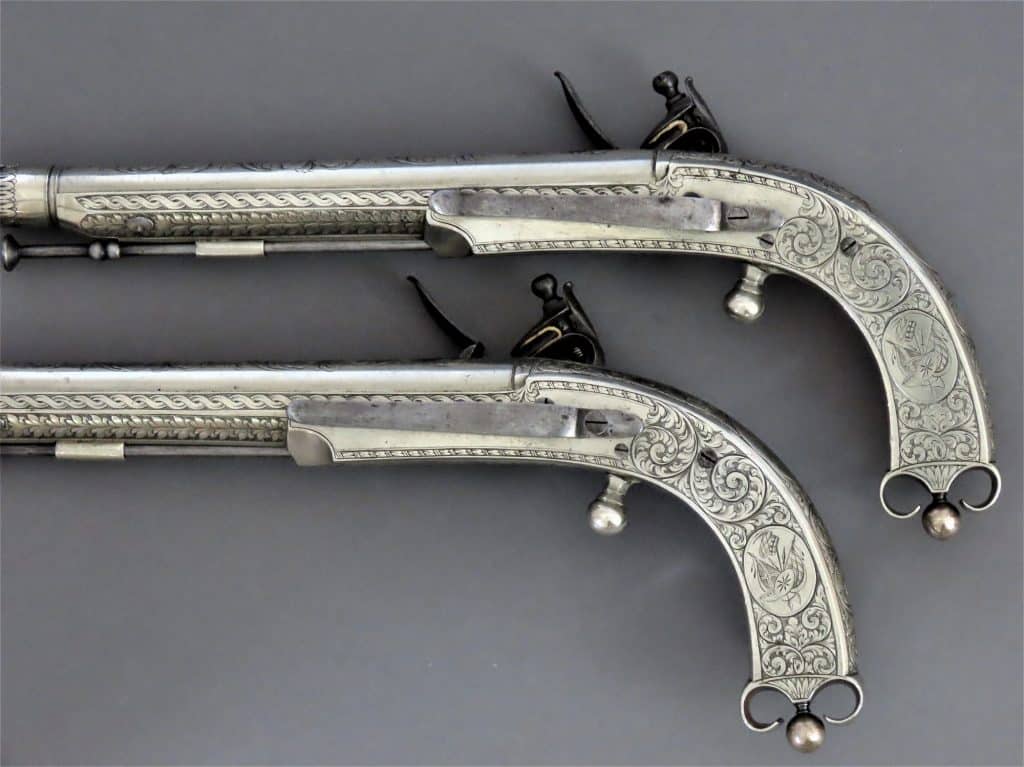 The pistols are an imposing pair mounted with 9 inch barrels. On all four planes the stocks and the tops of the barrels are sumptuously engraved with patterns of deeply incised foliate scrolls and curled leaves of exceptional quality. The stock undersides are engraved with lines of tri-lobate leaves and entwined ropework at the sides. The butts contain a  roundel on each side which contains British colours and arms on one side and a Scottish military bonnet, flag, shield and  banner on the reverse. The spine of each butt has a further roundel intended for a coat of arms or owner’s initials which has been left vacant.

The locks retain their original parts, have smooth actions and original blued finish. The cock outward surfaces and the plates are engraved with foliage and a lined border. The locks are mounted with roller frizzens and rain proof pans. The maker’s name “MURDOCH” is engraved at the base of each lock. The belt hooks and ramrods are original and retain some blued finish. 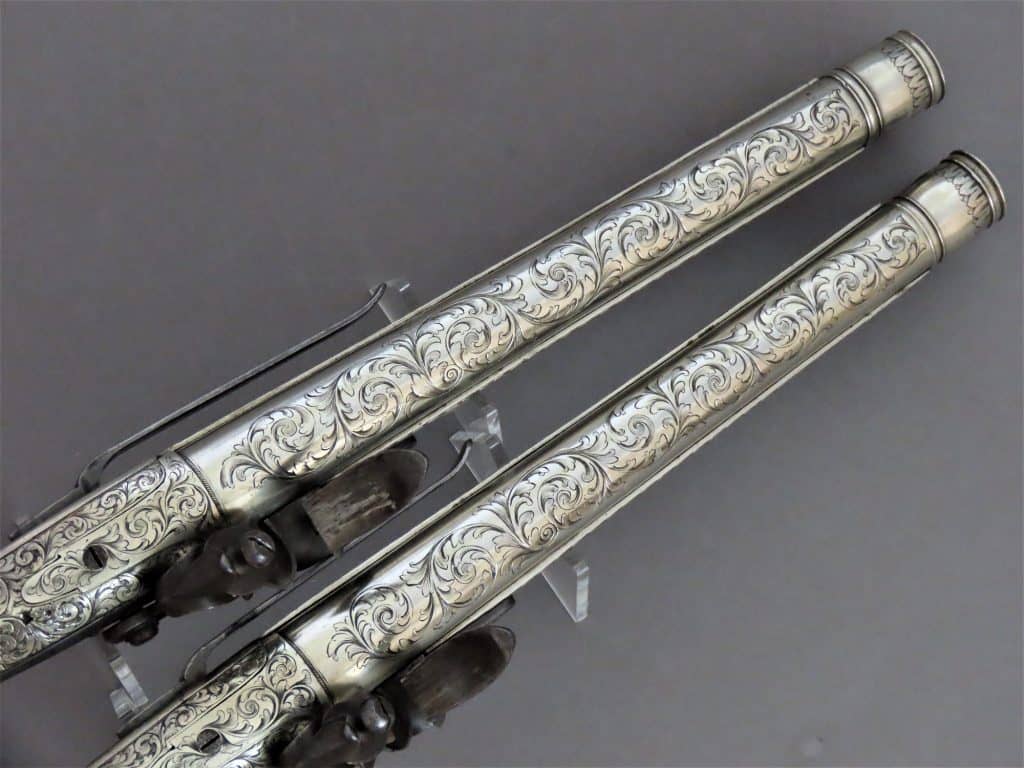 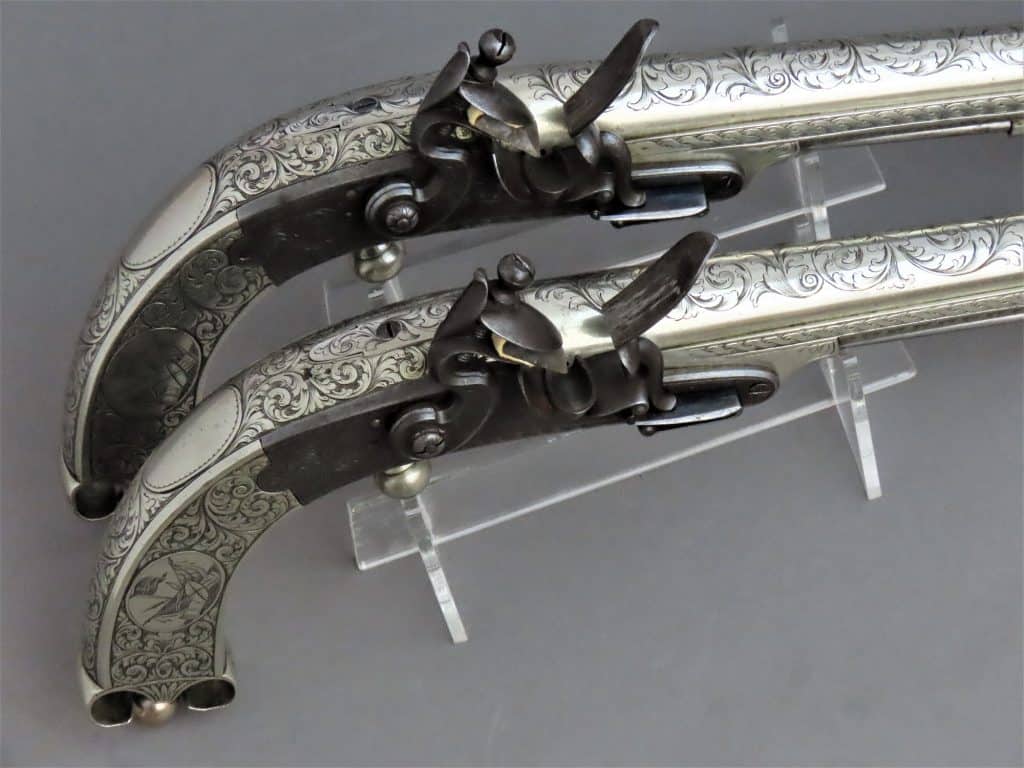 The heavy tapering barrels are sumptuously engraved on top with a line of intertwined scrolls which reduce in width in line with the barrel taper. The barrels terminate with swollen muzzles and are not proofed as was the Scottish manner. 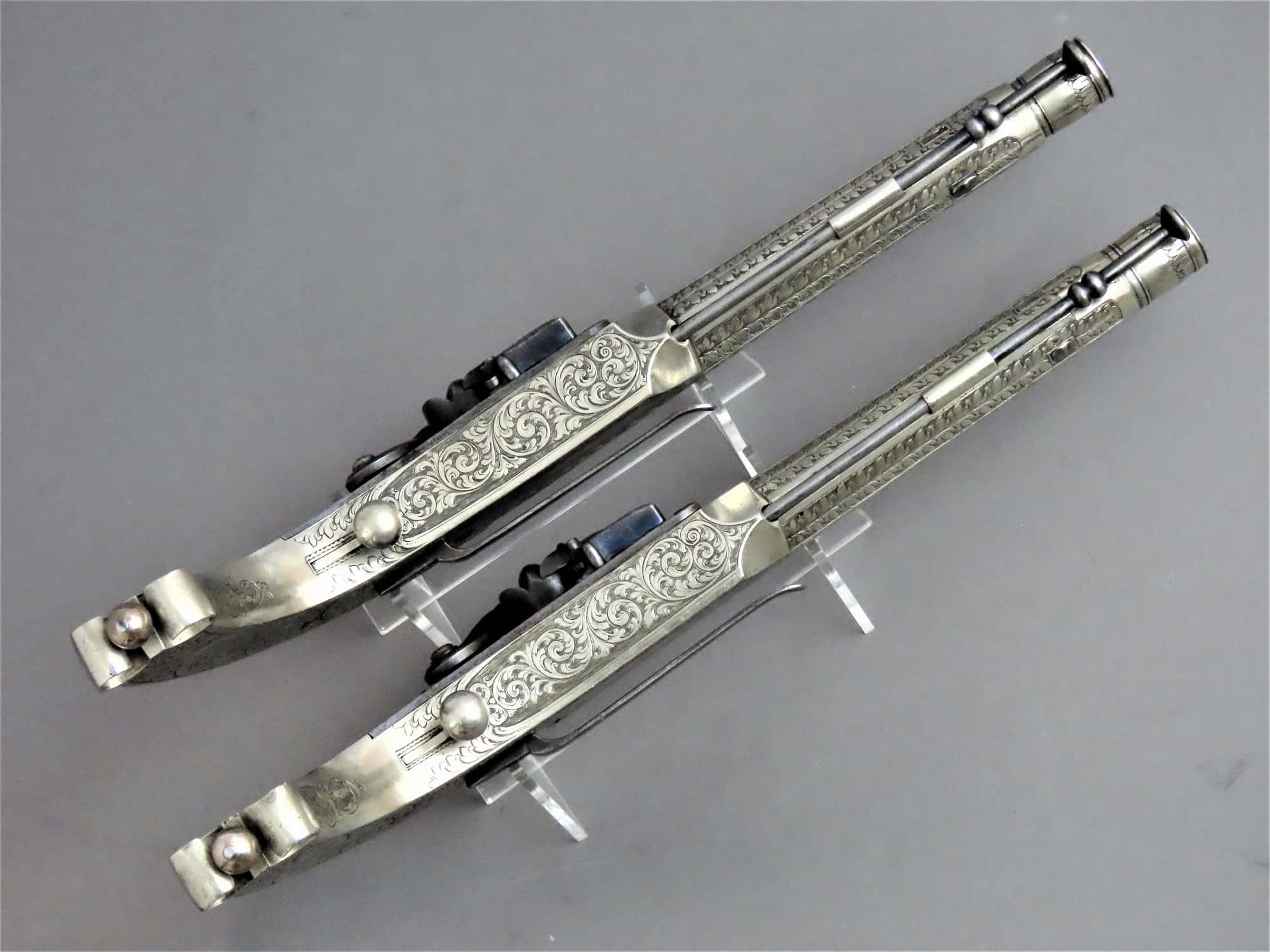 The pistols are mounted with button prickers and triggers without guards in the traditional Scottish style.  The absence of trigger guards is a throwback to earlier Scottish pistol manufacture. 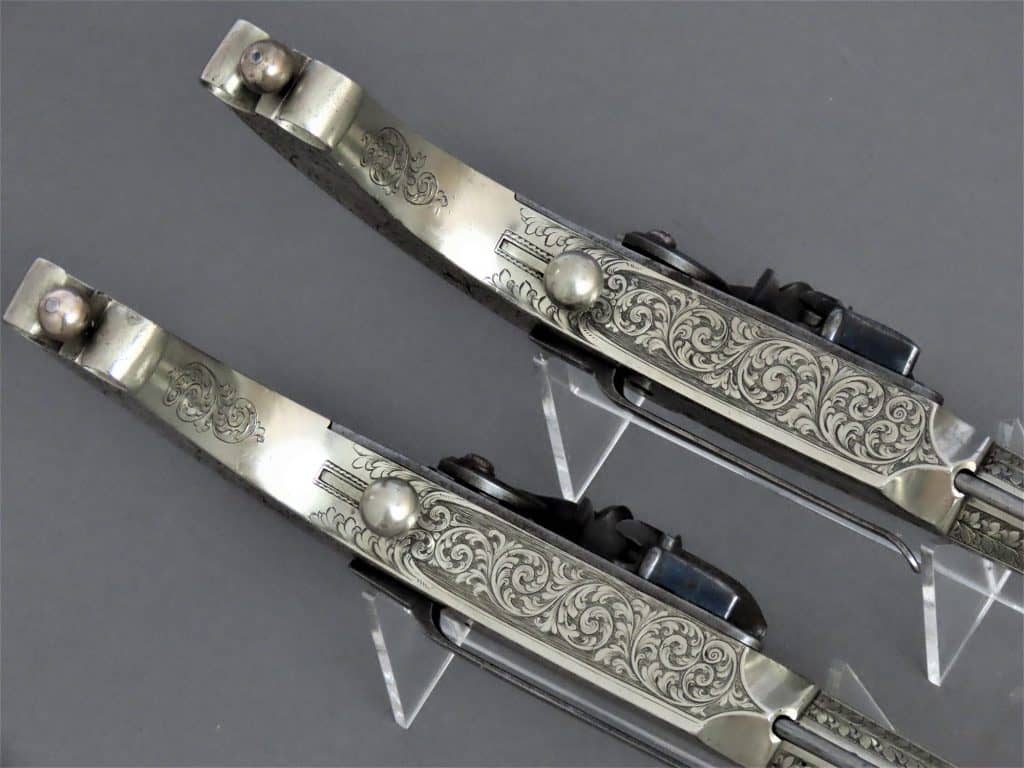 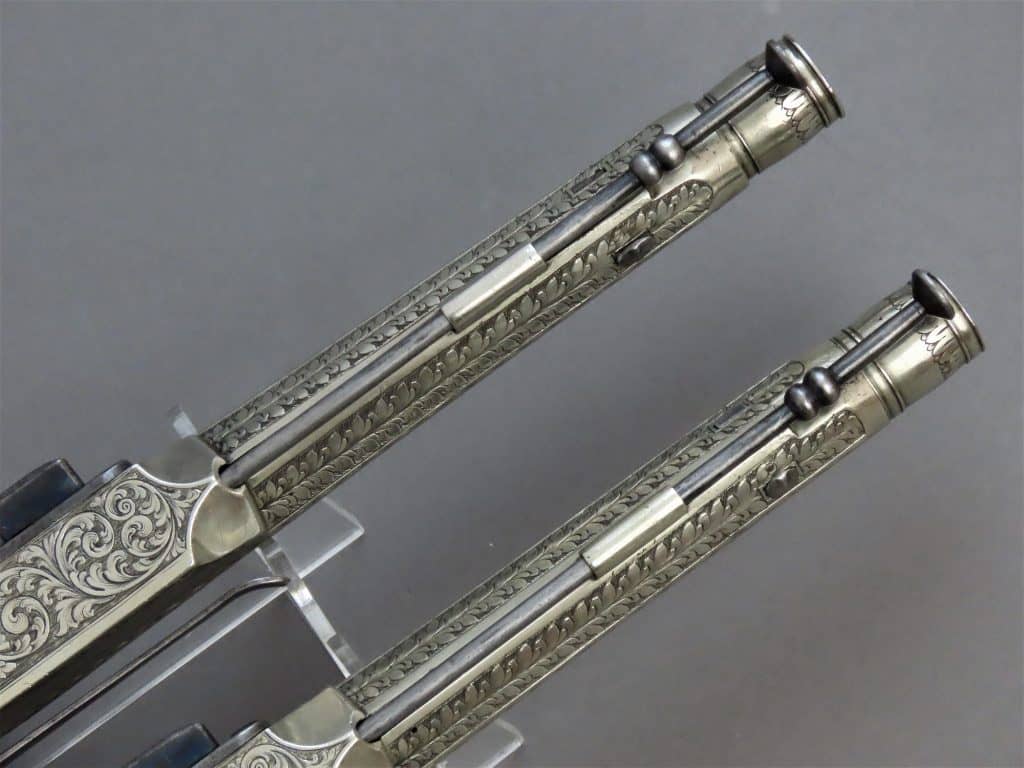 The surfaces of the spines of the cocks are more profusely engraved with patterns of Celtic scrolls either side of the vacant escutcheons. The barrel tangs at the breech are blended into this pattern by similar patterns of scrolls. The tang screws are blued in line with the other steel furniture.  The pistols show little wear as indicated by the overall condition and the existence of the original blued finish to the locks. 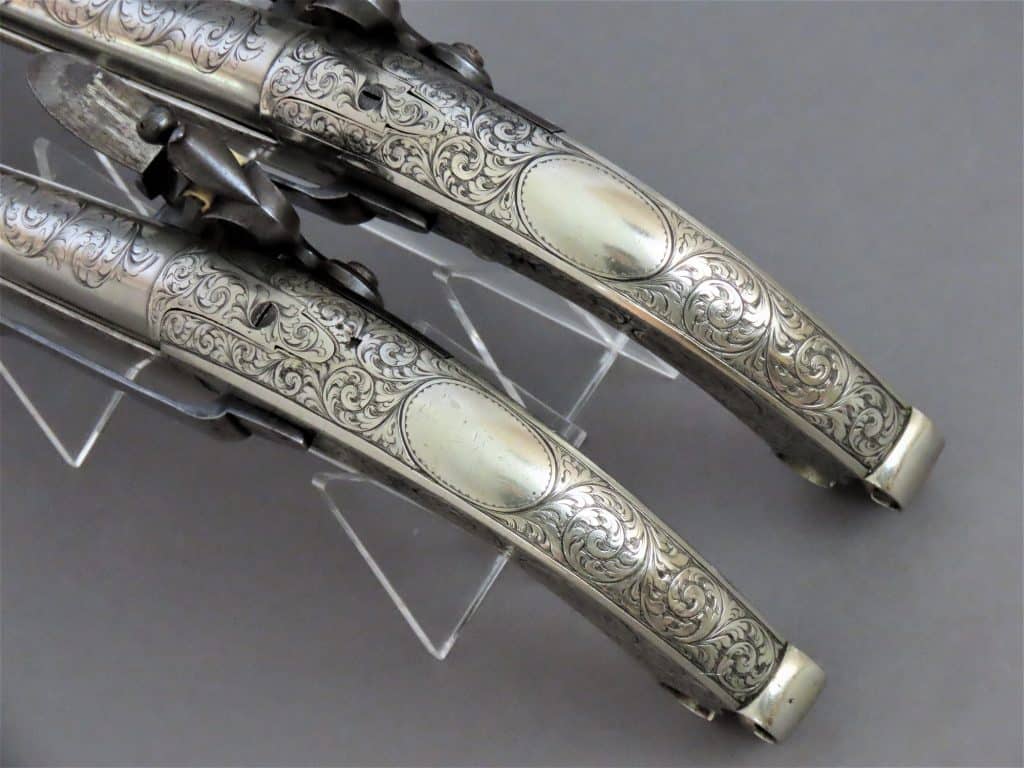 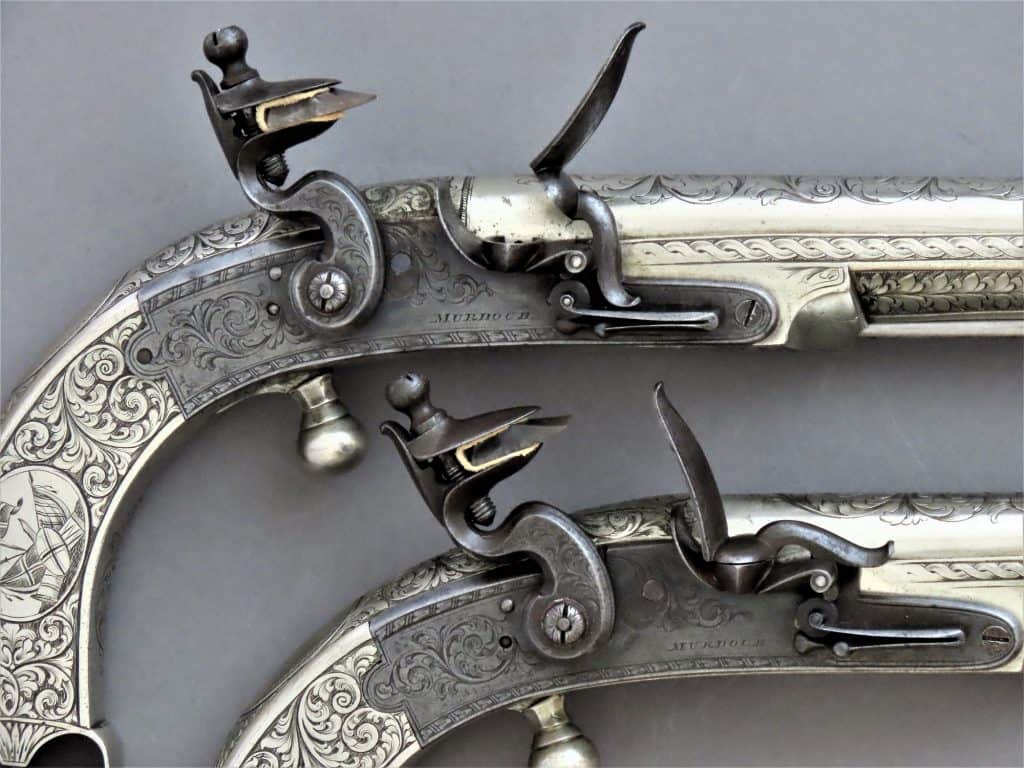 The same sumptuous engraving of intertwined scrolls is present on the flat surfaces underneath the stocks. The steel ramrods have moulded terminals and flattened ends. They extend through a single ramrod tube into the stocks. Either side of the ramrods the stock is decorated with entwined chains of leaves. The butt terminals of these pistols are of “Scroll Butt”, sometimes called Rams Horn”, form.  This was one of five forms of traditional Scottish pistol design and arrived in the middle of the  17th century.  The triggers are ball-shaped as are the silver prickers which screw into the butts between the rams horn terminals. 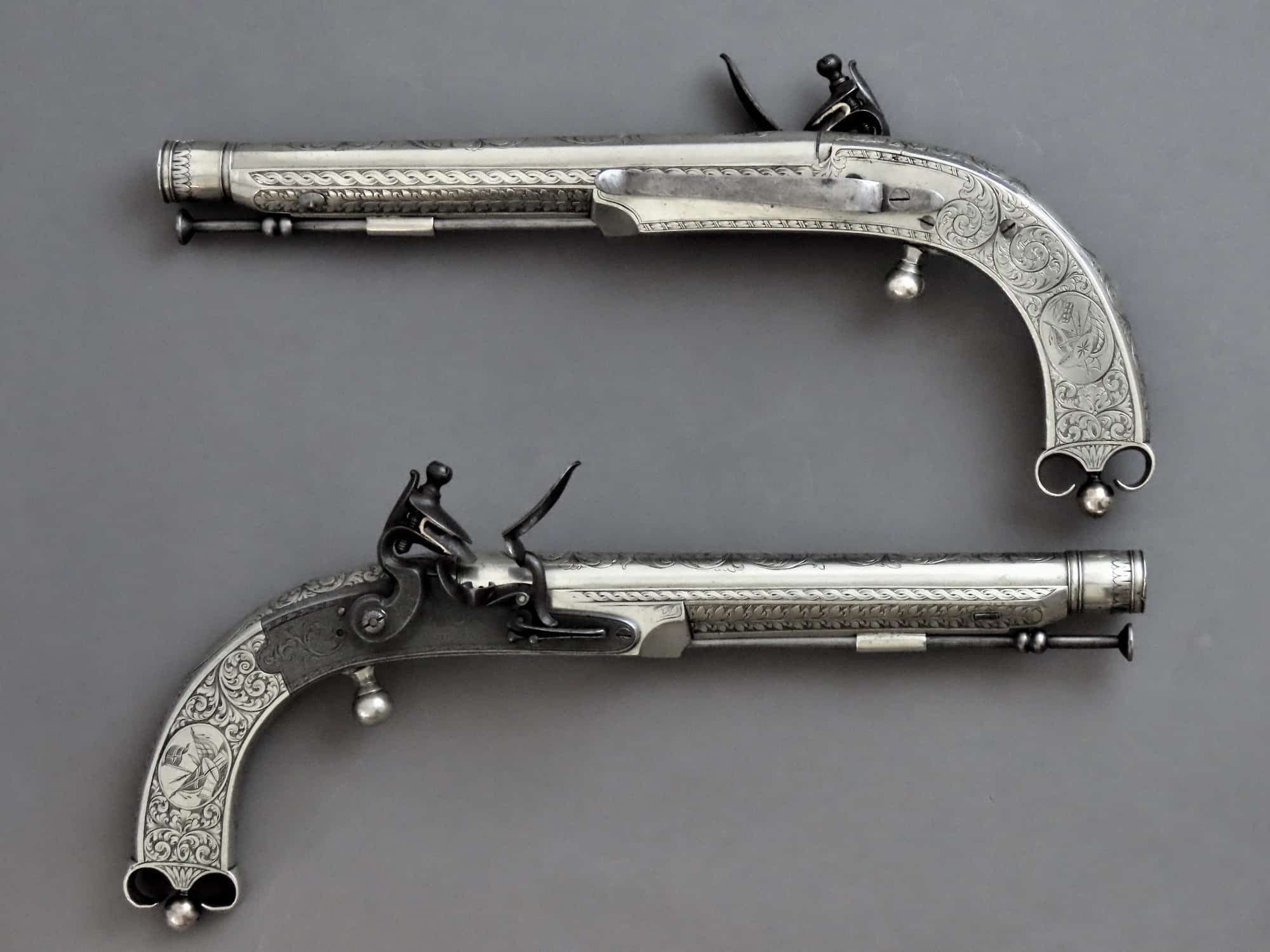 The overall length of each pistol extremity to extremity is just over 14 inches (35.5 cm).