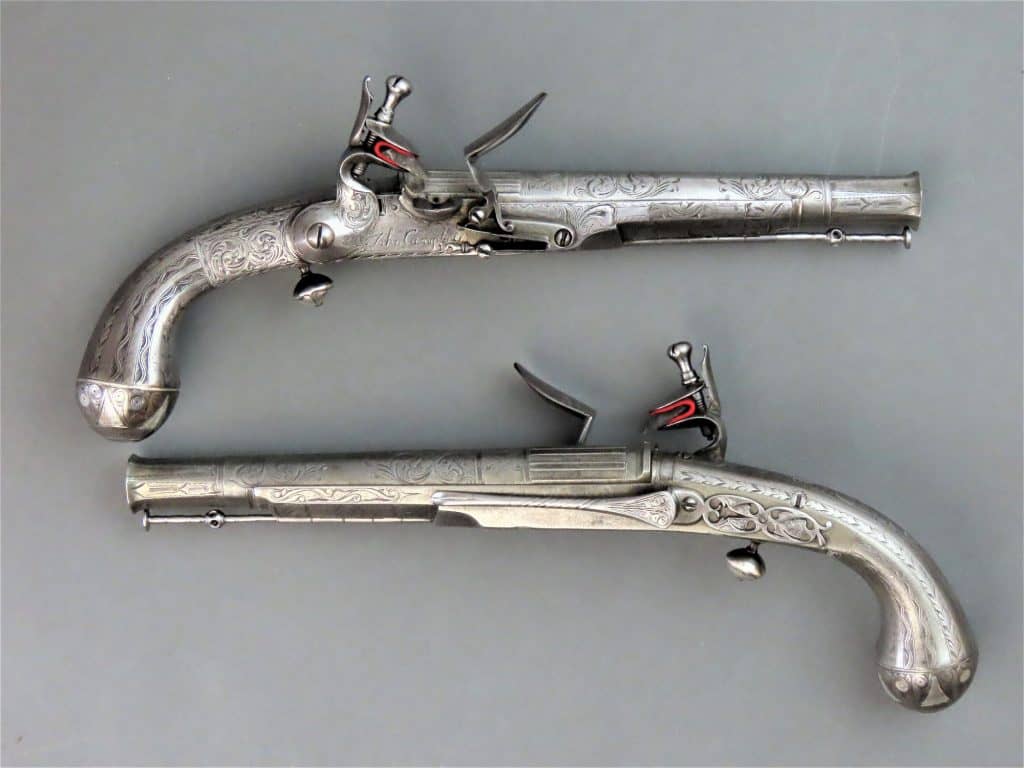 A fine and rare pair of 28 bore all steel Scottish Lobe Butt pistols by John Campbell of Doune dating to shortly after the mid-point of the 18th century. The pistols are in fine and original condition and are typical examples of the high standards of workmanship represented by the Doune gun makers. Pistols of this type and date were popular with officers in Scottish Highland regiments on service overseas in North America throughout the Revolutionary War period and in Europe. 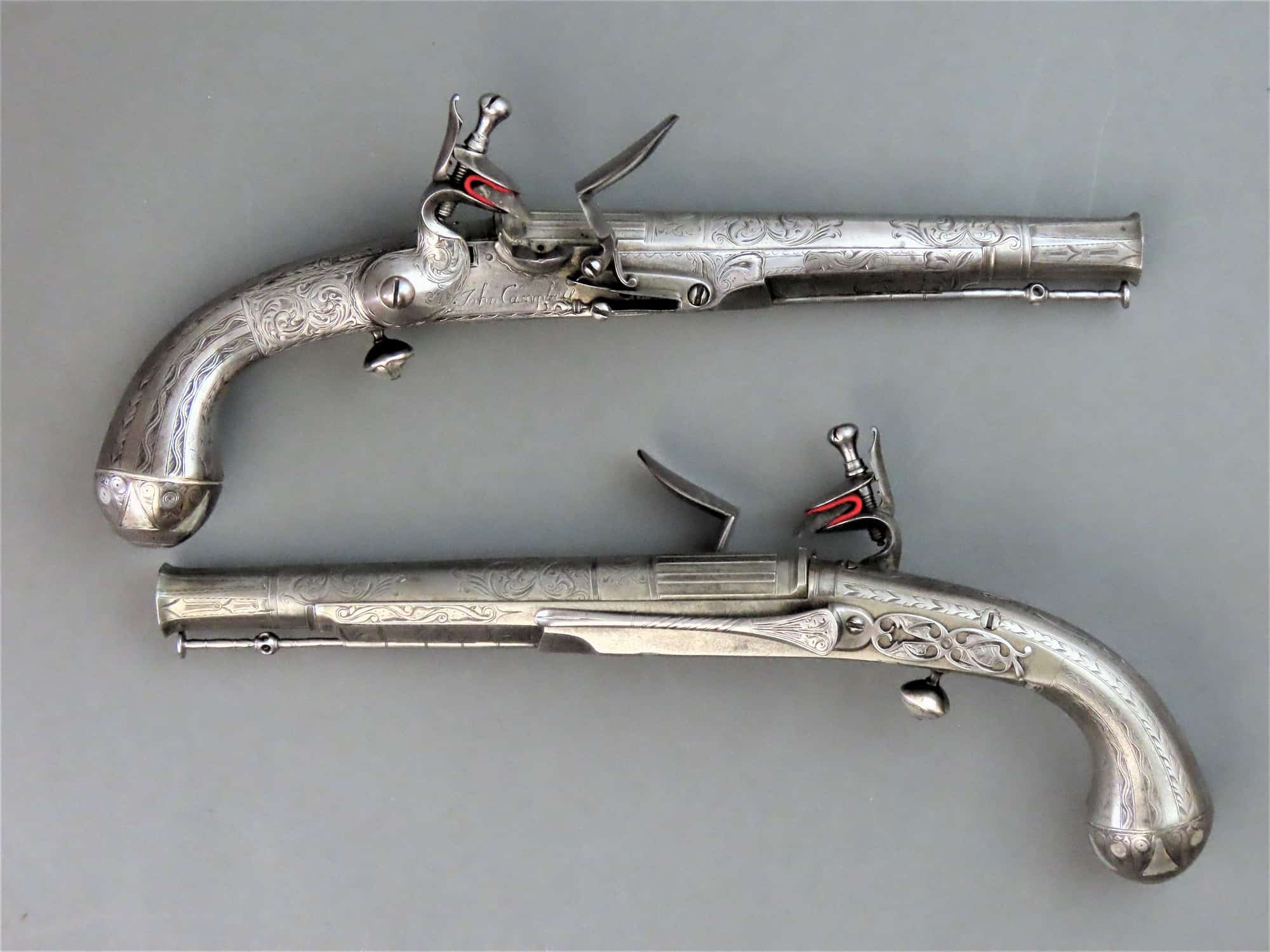 The “lobe butt” was the last of five types of traditional and uniquely Scottish pistol design to evolve, being preceded by the “fishtail butt” pistol, which arrived in the late 16th century, followed by the “lemon butt”, “heart butt” then “scroll butt” styles as the 17th century arrived and progressed. The lobe butt seems to have appeared in the second quarter of the 18th century. The Penicuik Drawings, a series of sketches by an unknown artist, of both Jacobite and Hanoverian soldiery in the 1745 Rebellion, depicts some Highlanders armed with pistols of lobe butt type of similar proportions to those discussed here, suspended from their belts. 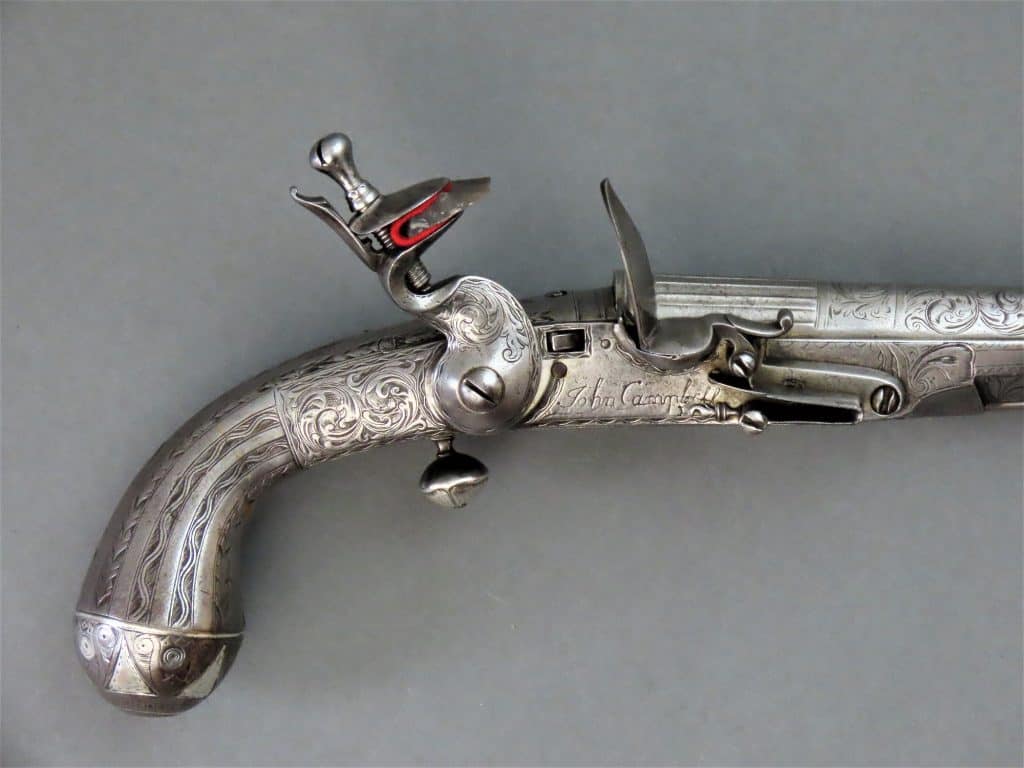 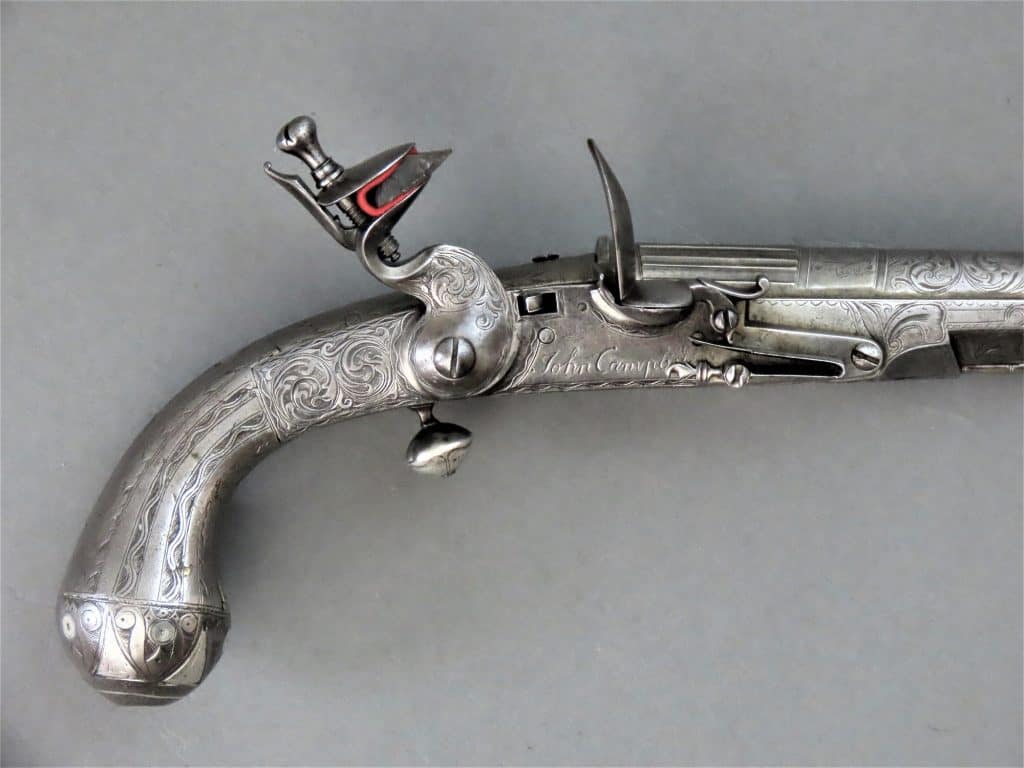 A British painting of a scene in London, entitled St James’s Park and the Mall, now in the Royal Collection Trust and painted in circa 1745, shows  civilians and soldiers from different regiments “taking the air” in convivial park surroundings. In the centre, two Scottish officers are depicted in Highland dress uniform, one of which is holding a basket hilted sword and clearly has a steel lobe butt  pistol hooked onto his belt. This is likely to be one of a pair, the second pistol obscured by clothing. See the link: https://www.rct.uk/collection/405954/st-jamess-park-and-the-mall-0 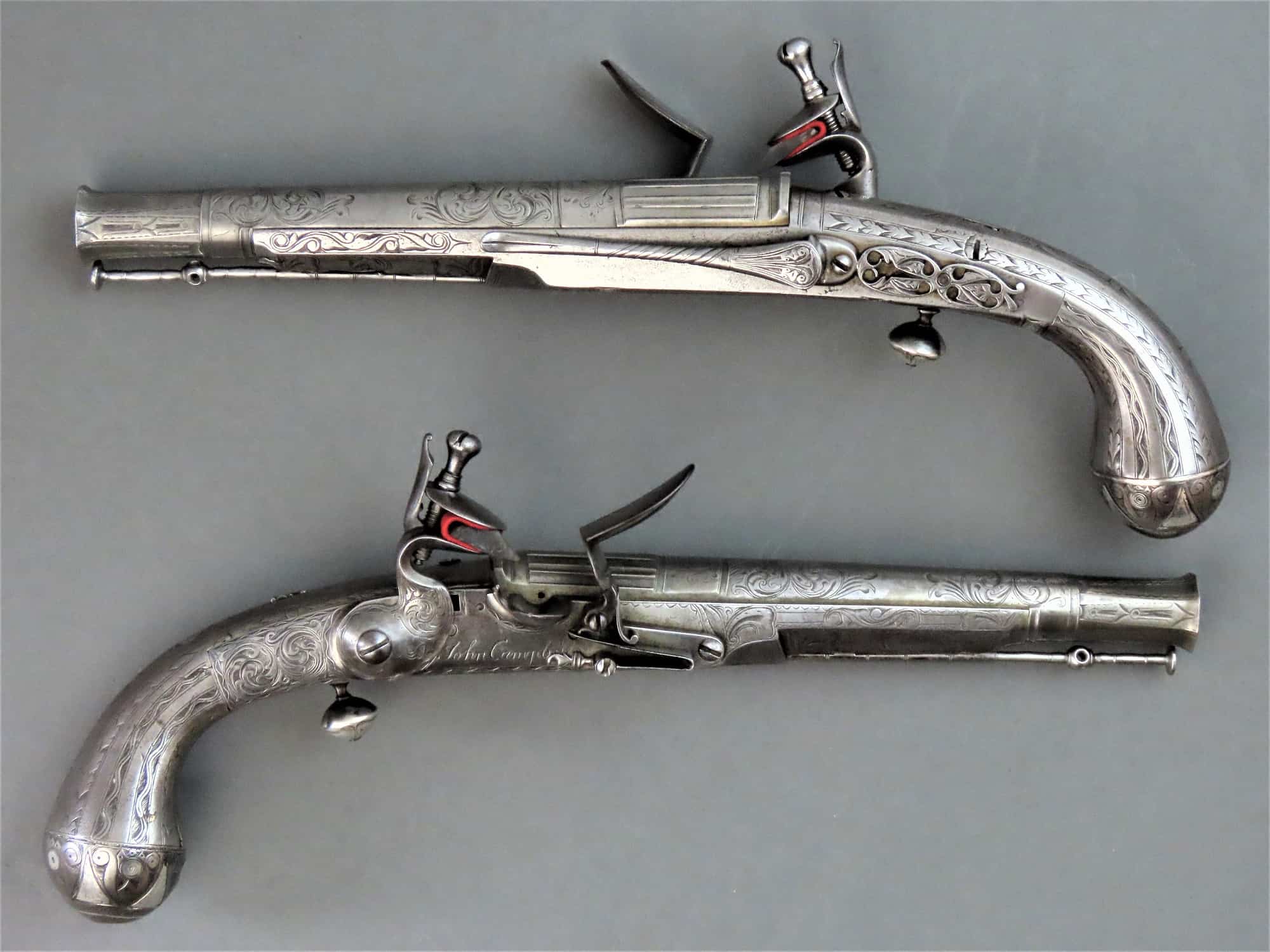 Both lobe and scroll butt styles were produced at the same time in the mid-18th century by the Doune gun makers. The only difference between the two forms being the shape of the butt terminal. The typical Doune decorative style applied to both types relates to the barrel decoration, the scrolls on the lock plates behind the cocks, and on the fore ends, spines and undersides of the pistols. The scrolling and leafy features indicate a Celtic influence to this style of decoration. 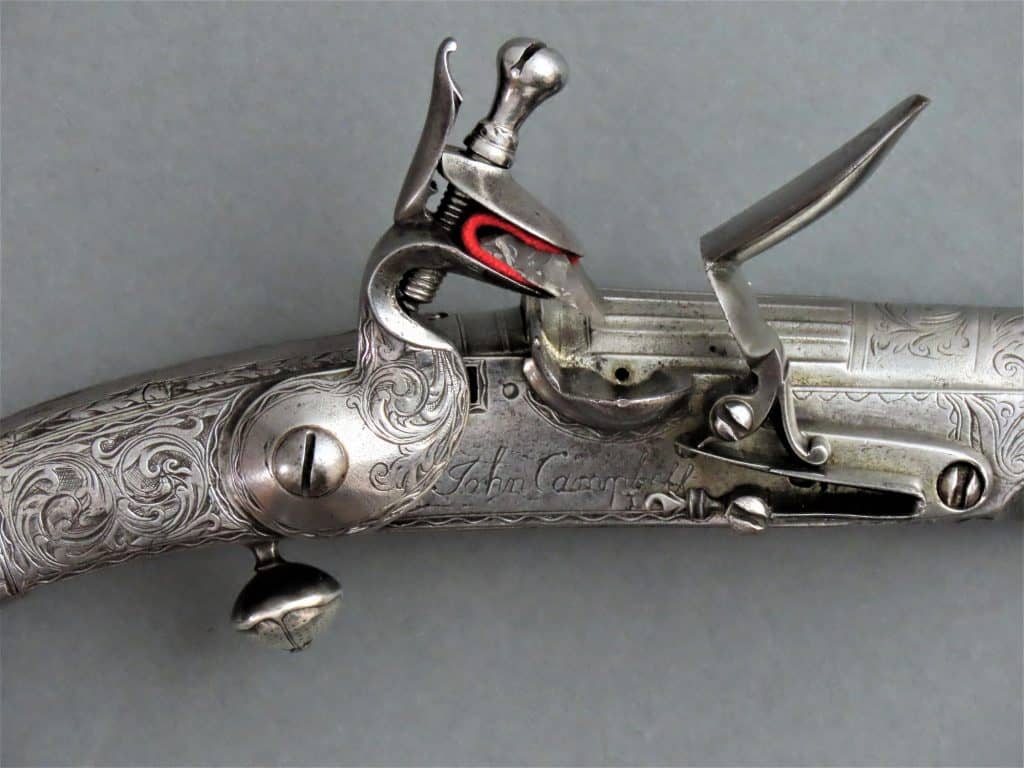 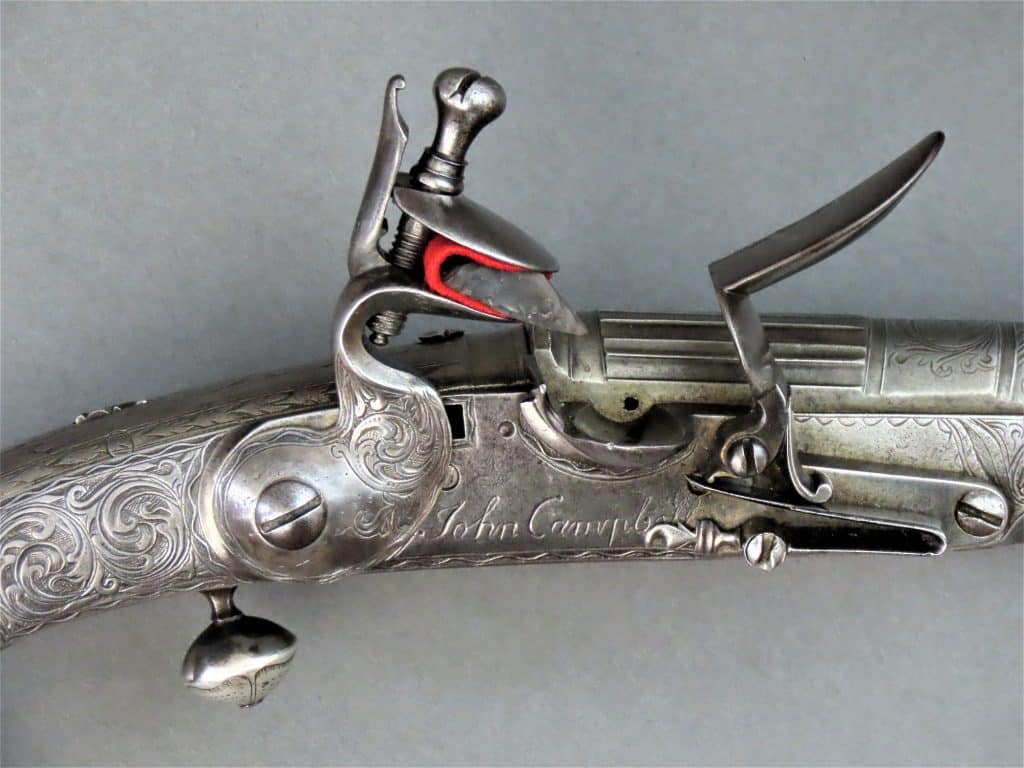 The four stage barrels have fluted sections near each breech and flared muzzles with octagonal sides engraved with fine scrolls. The middle sections of the barrels are rounded and boldly engraved with foliage. The overall length of each pistol extremity to extremity is just under 12.25 inches (just over 31 cm). The barrel lengths are 7 and 3/8 of an inch (18.75 cm). 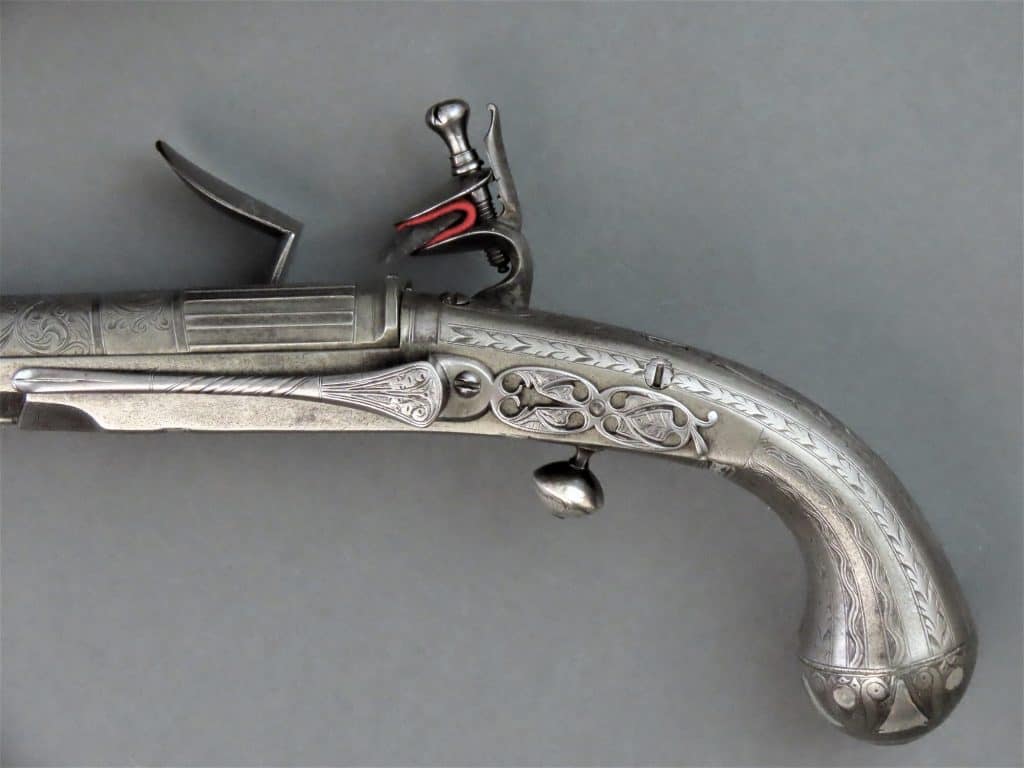 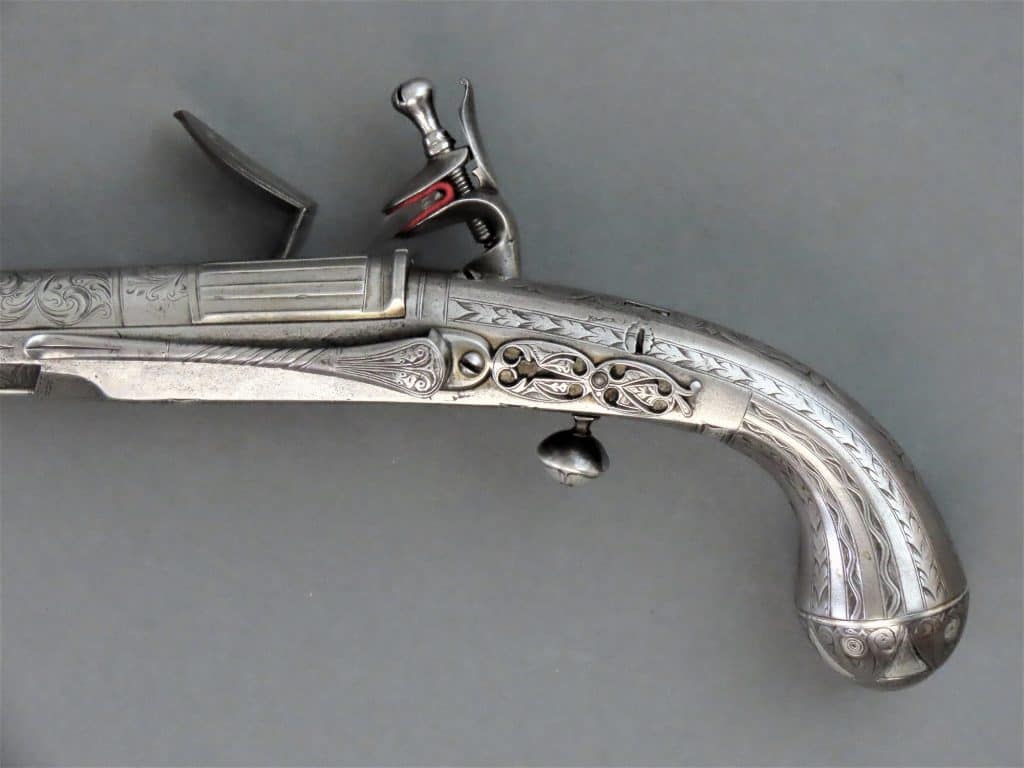 Underneath the locks the space is decorated with fine linear engraving of scrolls, parallel lines and waves, crossed by three raised silver bands engraved with chevrons. The base of each butt is centred with a silver button decorated with engraved concentric rings, surrounded by two engraved bands cut with squared sections and inlaid with a silver band between which extends around the circumference of the stock. Five silver triangles, the points radiating outwards, are applied as the rounded stock widens from its base. These are interspersed with  silver circular studs, smaller than that on the base and decorated with similar concentric rings.  Above these designs a further inlaid silver band extends around the rounded butt at its widest. 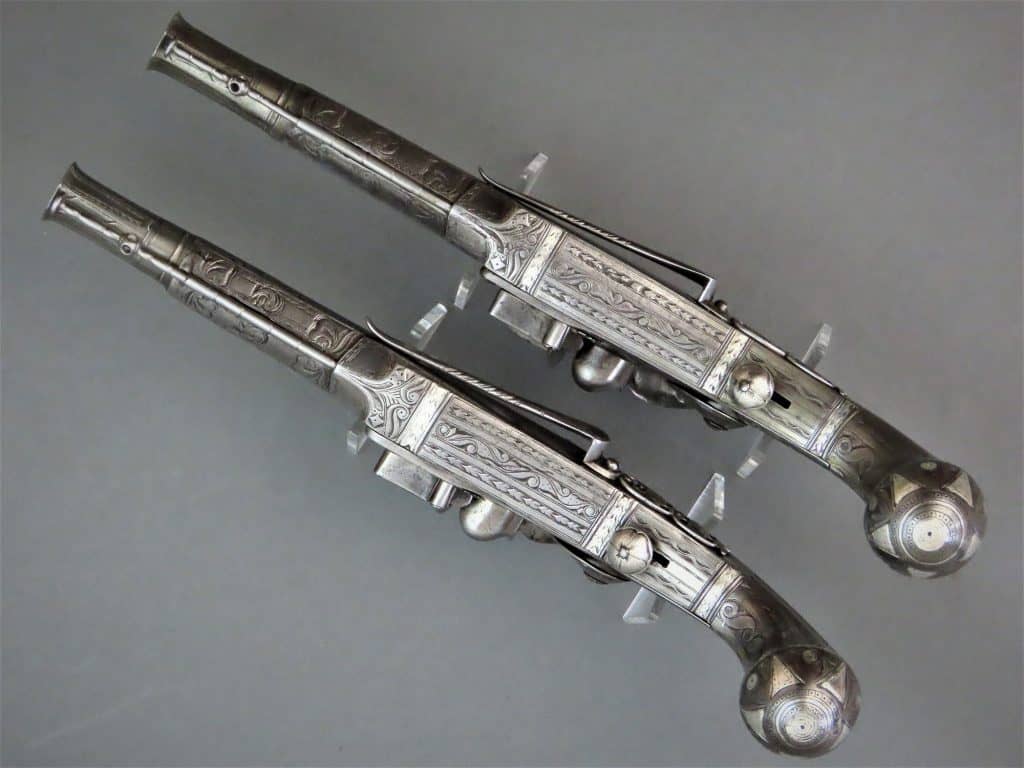 The belt hooks are  attached to each stock with a double roundel pierced and decorated with designs similar to those found on the guard panels of traditionally made Scottish basket hilted swords. These slender hooks widen towards the flattened ends and curl slightly outwards. The shafts are delicately filed with spiral rope-work twists. 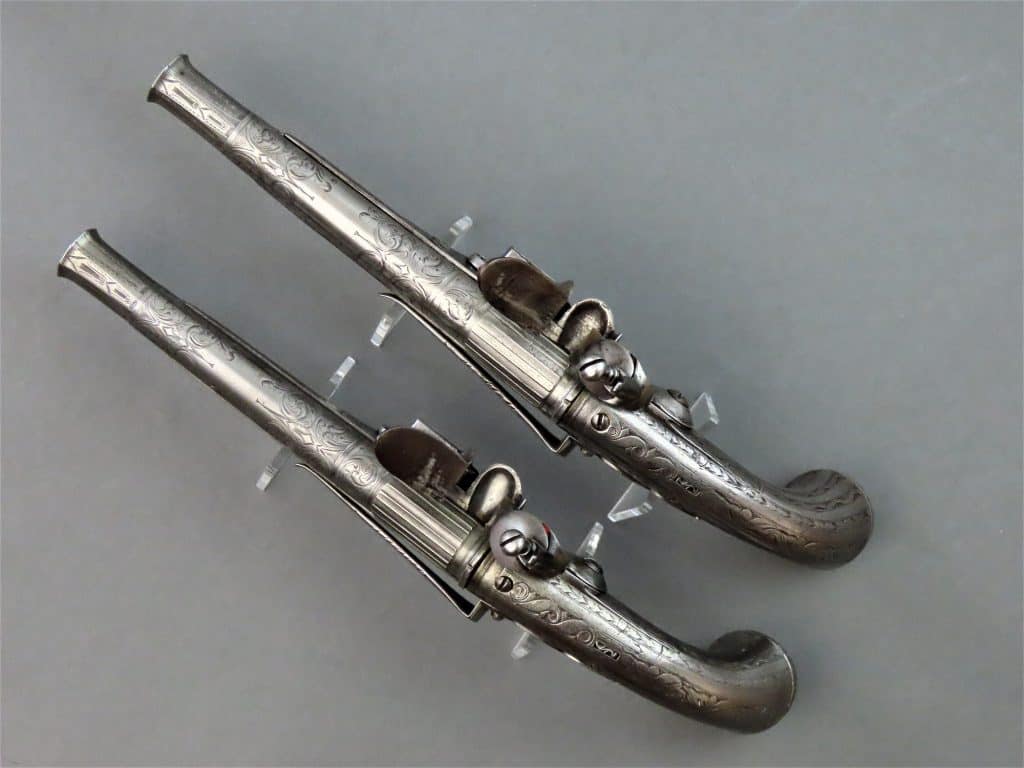 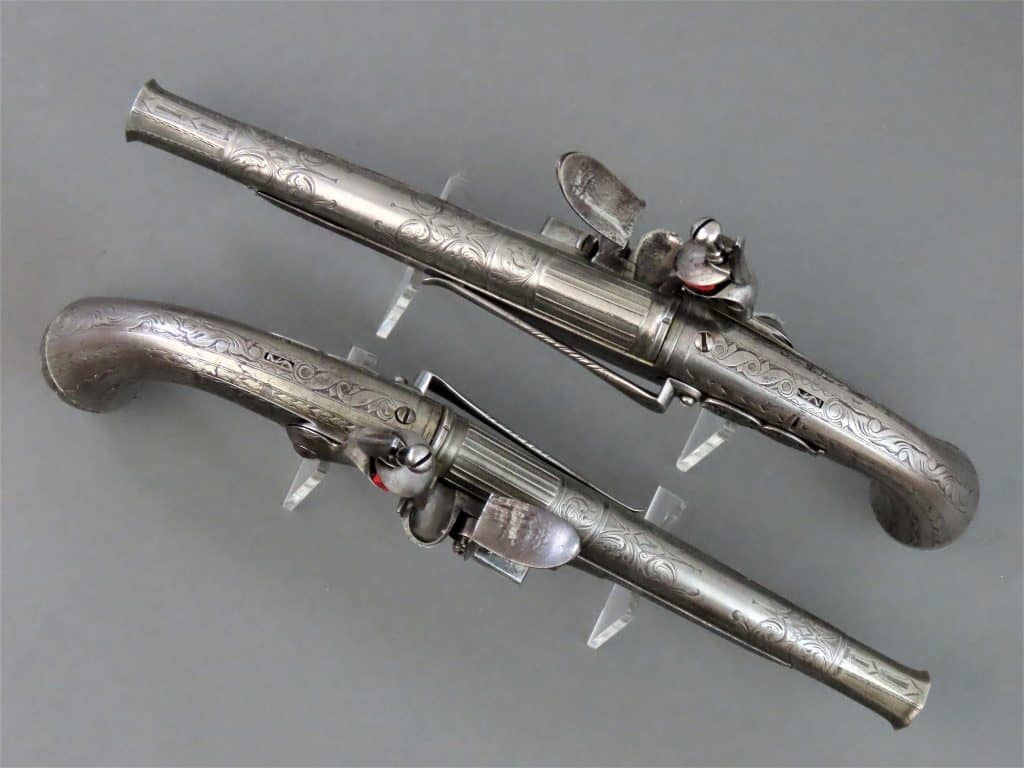 The locks are of typical “Highland” form with a horizontal sear extending through each lock plate which holds the cock in the half cock position. A vertical sear is present which extends from the top of each trigger plate and protrudes through a small oblong aperture in the centre of the upper surface of each butt behind the barrel tang. 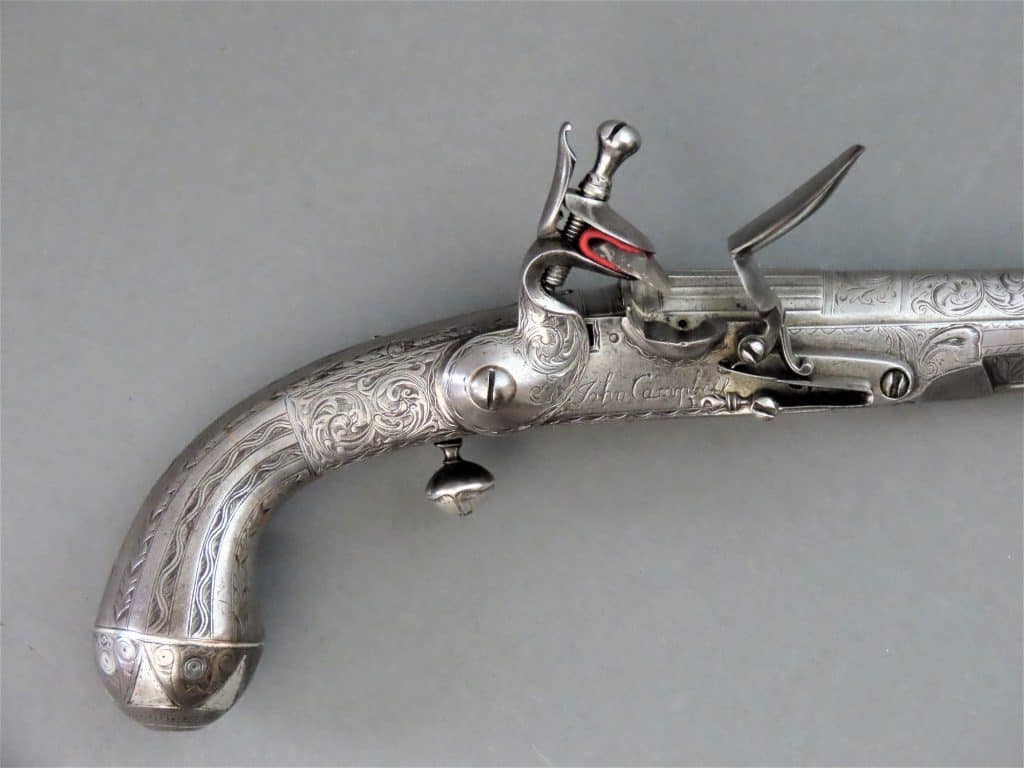 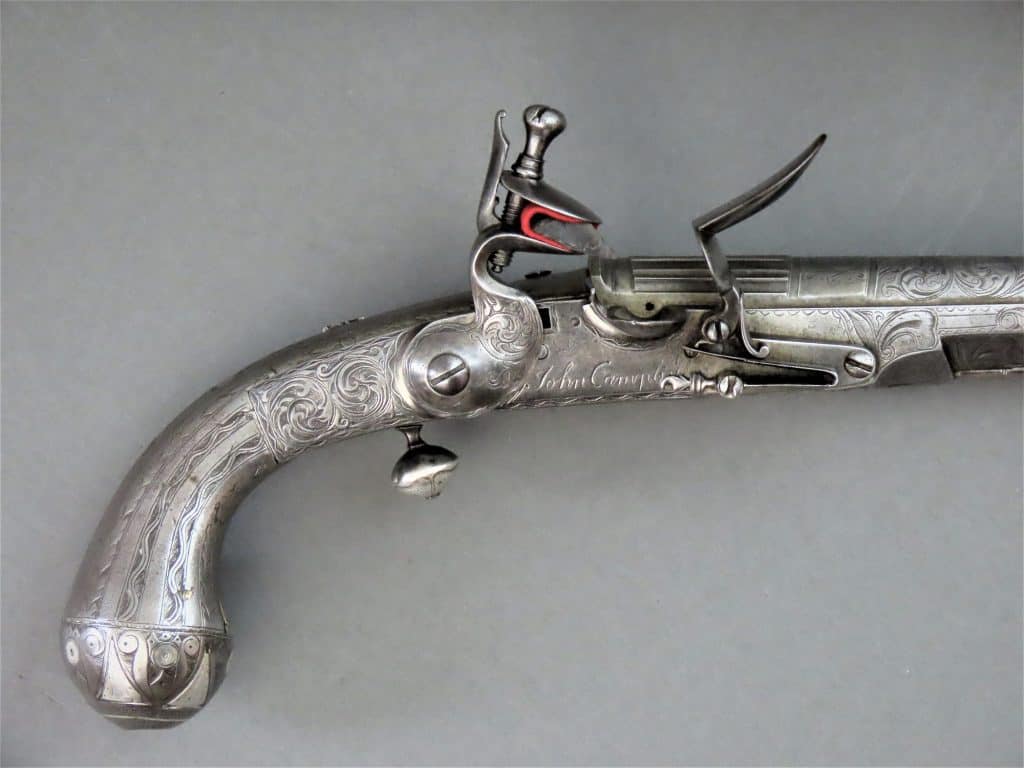 The lock plates are each signed “John Campbell” in typical form for the signature of this maker.The John Campbell that made these pistols is the second pistol maker of this name recorded to have worked in Doune. His father was Alexander Campbell, another renowned Doune gun maker, who was the son-in-law of the first John Campbell who died in 1720.

In 1798 John Campbell (II) is recorded as retiring from the gun making business and referred to as a maker of “pistols to the first nobility in Europe”. The distinctive style of Scottish pistols was attractive abroad as well as at home. He is recorded as dead in 1807 at the age of 71 years and was buried in Stirling.