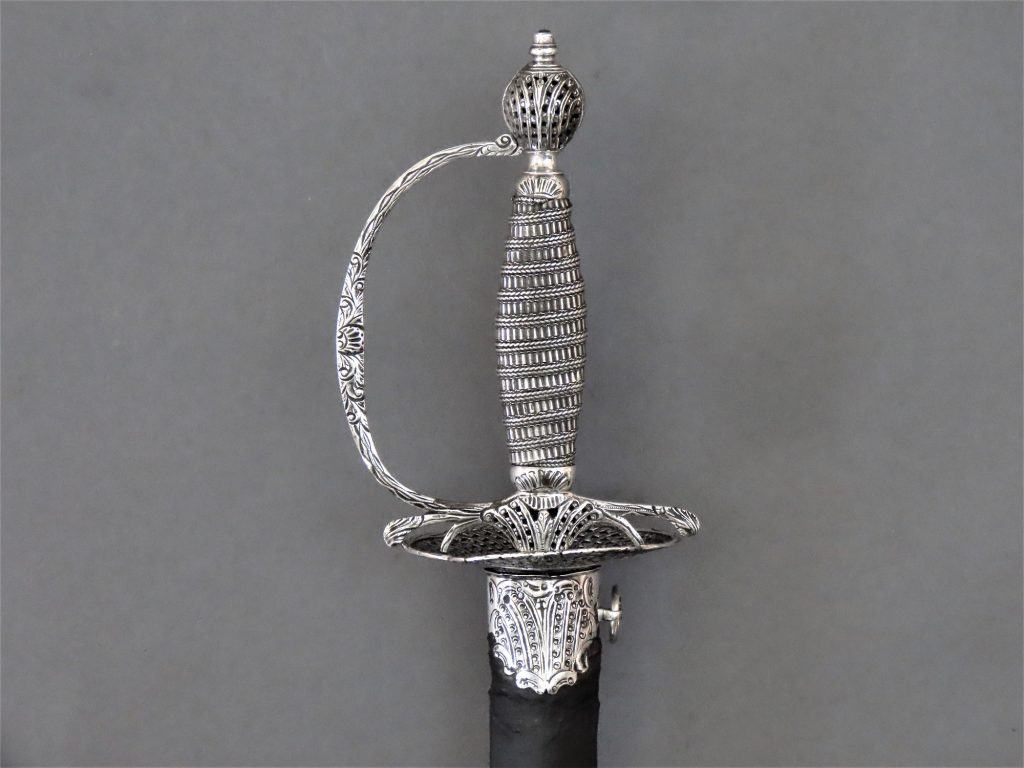 A fine English silver hilted small sword by William Flint of London with hallmarks for 1770  / 1771.  The hilt is mounted with a dish guard which is exquisitely pierced and engraved with feathered sprays formed as concentric crescents. This design pattern is a common theme present on the other major silver components of the sword such as  the pommel, ricasso and scabbard locket which attests to the originality and homogeneity of the parts. The sword is well-balanced and mounted with a colichemarde blade which retains much of its original engraving.

William Flint was a prominent cutler and silver-hilted sword maker.  He moved to London from Northampton as a young man and was indentured to the cutler and silver hilted sword maker George Fayle for seven years from 19th November 1761. In 1768 he recorded his mark of “W F” in raised relief inside a depressed rectangle at Goldsmiths’ Hall whilst still working at Fayle’s address.  He was sworn free of the Cutlers’ Company in 1770 and established himself in business with premises in Dogwell Court, in the Parish St Dunstan in the West, in the City of London. Flint seems to have built a successful business and employed several apprentices during the following years.

This sword was made in the early part of Flint’s career in the first year that he was sworn free and permitted to pursue his own destiny as a silver hilted sword maker. Flint seems to have established himself early on by building  supply arrangements with retailers and outfitters based in his vicinity such as Stevens of Temple Gate.

The hilt is an example of the high standards of design and execution required of the 18th century London silversmith as well as an example of one of the most effective weapons of the 17th and 18th centuries. Silver hilted small swords were fashionable attire for 18th century gentlemen. Mostly worn for effect, someone wearing such a sword was also announcing to the world that he was able to use it. Despite the stylish and often delicate appearance of these swords they were formidable dueling weapons.

The hilt consists of a shallow dish guard with a waved perimeter pierced and engraved with intricate patterns of feathered crescent scrolls and swirls within a thickened perimeter brim.  The maker’s mark of “W F” is present on one side of the knucklebow near the pommel accompanied with the further marks of the crowned leopard’s head assay mark, the royal lion passant and date marks.

The tapering, hollow ground, stiff, colichemarde, triangular section blade is mounted with an engraved panel on each side at the forte which contains scrolls and foliage.  Beyond this panel is a further design of scrolls on each side at the narrowing of the blade edges. The baluster shaped grip is covered with spirally wrapped crimped silver strip separated by by lengths of contra-twisted roped silver wire flanked by narrower lengths. Silver cap terminals are present top and bottom of the grip engraved with floral designs. The sword retains its original scabbard formed with a wooden core over which a black leather covering has been tightly wrapped. It retains its silver mouthpiece, suspension mount and chape.

The sword is in fine condition. There are no losses or repairs to the hilt which has maintained its original pleasing outline.  It is rare to encounter swords of this type with original scabbards.  This scabbard, like many of its contemporaries, is a rare survivor and has been repaired at the mouthpiece and at the narrowing where the colichemarde is accommodated. The suspension mount has been split in the past and repaired to sit firmly in the area where the scabbard is repaired and swollen. The blade is in fine condition with a shallow mottled grey patina and minor spots of age staining in places. The engraved panels on the whole are quite clear.

For further information see “London Silver-Hilted Swords”, their makers, suppliers and allied traders, with directory, by Leslie Southwick, 2001, Royal Armouries, and page  111 for the biography of William Flint, and Grimwade 1990 mark reference 3115 for Flint’s mark registered at Goldsmiths’ Hall.