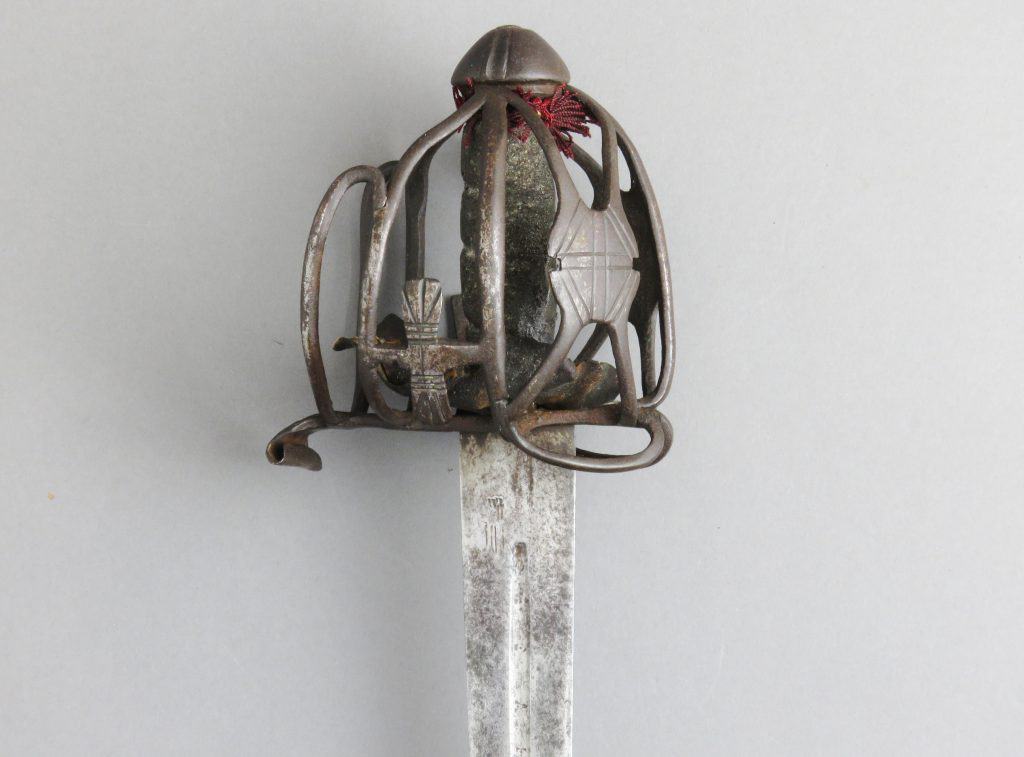 A scarce, characterful and attractively proportioned early Scottish basket hilted broad sword dating to the middle years of the 17th century and the Civil War periods in England and Scotland. The hilt is of an evolutionary type that sits between the earliest forms of Scottish basket hilted sword, also known in historical sources as the “Irische” (Irish) type, that appeared towards the end of the 16th and early 17th centuries, and the arrival of the fully formed Scottish basket hilt in the later 17th century, characterised by larger pierced guard plates. The sword retains its original scabbard.

The hilt is formed with butterfly side guards engraved with lines and hexagonal shaped guard panels decorated to the front with diamond shapes with crosses inside formed from pairs of incised parallel lines. The tang is peened over on top of the dome-shaped pommel from which three sets of triple grooves, the middle one being more pronounced than that on its flanks in each case, radiate outwards. The pommel has a groove chiselled around its circumference,  just below the middle, into which the uppermost ends of the guard arms are secured. The baluster-shaped, spirally grooved wooden grip retains its original aged shagreen covering which has now lost its wire binding. The remains of a woollen fringe at the top of the grip is evident and part of the original leather liner at the base is still present.

The broad double-edged blade is of high quality, of gently tapering form and of flattened lenticular section. A deep central fuller commences  1.5 inches (4 cm) from the hilt and extends for circa 7 inches (18 cm) down the blade.  Within the fuller the capital letters “S A H A G O M ” appear on each side flanked by quatrefoils of dots. The term is often associated with the blade makers of Passau and often appears on similar blades mounted onto Dutch Walloon swords in the same period. An anchor-like mark appears on both sides just after the end of the fuller. The overall length of the sword is 34.5 inches (just over 88 cm) and the blade length 29.25 inches (just over 74 cm).

Swords of this date were not manufactured with the scroll wrist guards which were typically a feature of later more fully developed Scottish basket hilts. This sword has a wrist guard which seems to have been added to the rear quillon sometime after its date of manufacture. This form of updating attests to the long working life of the sword.  A groove cut underneath the cross accommodates the shoulders of the blade in the usual Scottish manner.  The scabbard is made in the 17th century way, of slats of wood covered with leather. The original iron chape is still present. The other iron mounts are absent and the scabbard has been repaired in places during its working life.