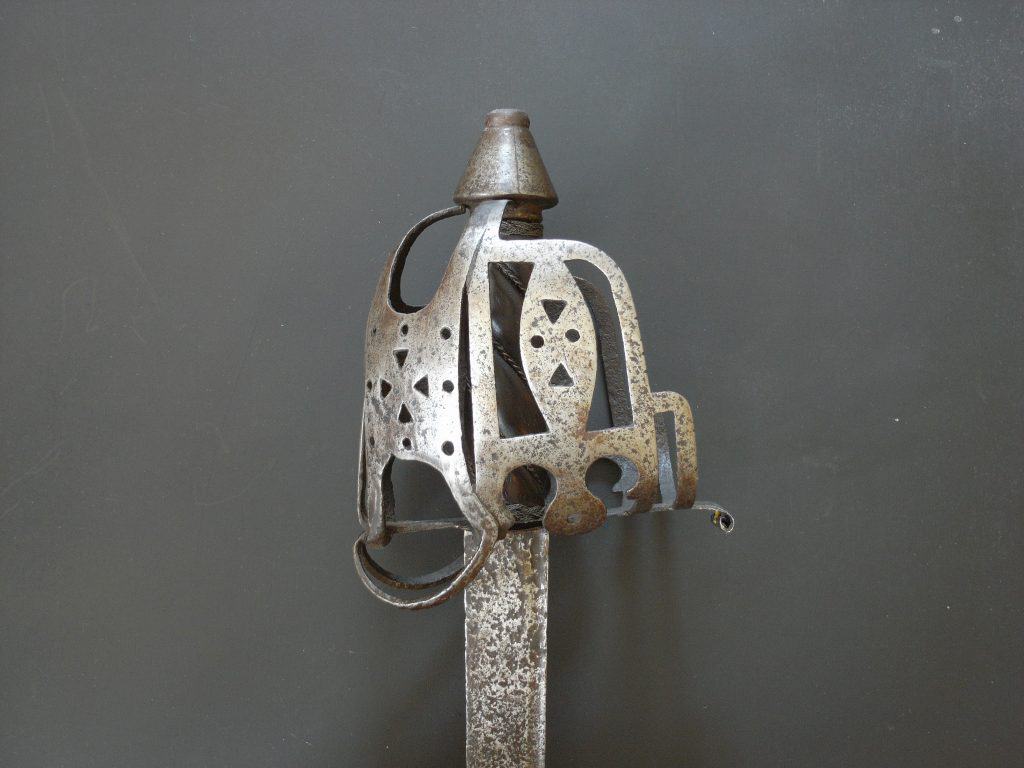 A representative example of a distinctive type of Scottish munitions grade military basket hilted back sword dating to the middle to third quarter of the 18th century. The sword is typical of those manufactured for enlisted men in Highland Regiments such as The Black Watch, before and after the 1745 Rebellion, both in the Scottish Highlands and then overseas, particularly in the Americas. The swords were funded by regimental colonels from their allowances. Anthony D Darling in his “Weapons of the Highland Regiments 1740 to 80” (Historical Arms Series No 33) devotes a section to this sword type.

The hilt has the usual appearance of a Scottish 18th century basket-hilted sword, but is of different construction, being formed from a cut plate to which some features, such as the frontal loop guards, are forged. The front and side plates are pierced with circles and triangles.

The single edged blade has a double fuller extending from the hilt either side and becomes double edged towards the tip. The overall sword length is just over 39.5 inches (100.5 cm) and the blade is 33.5 inches (85 cm) long. The grip, unusually, appears to be original, made from spirally grooved wood covered with leather, now flaky, bound with a double twist of iron wire.

The pommel design is almost unique to this sword type being an exaggerated cone shape with an integral wide button and incised with three lines which radiate from it. The pommel of this sword is incised with the letter “B”, with “91” beneath, to be read when point down, so is most likely an armoury number to be referred to when the sword was in store rather than in hand.

The general use of the sword by enlisted infantrymen in the British Army was abandoned in 1768 apart from companies of grenadiers and Highland Regiments. In 1783 the 42nd handed in their swords to the Halifax Ordnance Depot. In 1784 the issue of swords to lower ranks was discontinued completely in Highland Regiments except for pipers, drummers and sergeants. Issue to grenadiers was also discontinued.

Some of these swords have stamps on the blade largely representing the three main English contracted makers of this sword type based in London and Birmingham – Harvey, Drury and Jeffries. The absence of a blade makers mark on this example, plus the double rather than the more usual single fullered blade,  probably indicates a date of manufacture to the earlier period of production, and probably for The Black Watch.