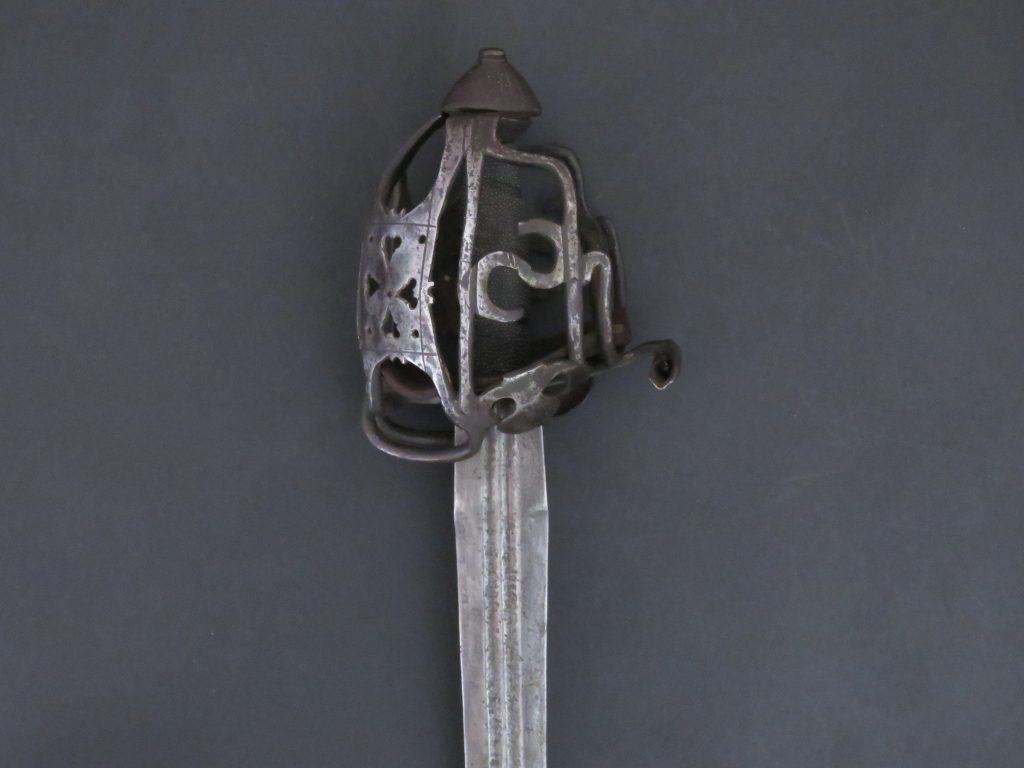 A handsome and imposing Scottish basket hilted broad sword of “S” Bar form, of bold proportions, well balanced, and dating to the late 17th or early 18th century. The sword has an imposing weight with a functional and no frills finish. It is mounted with a heavy broad sword blade which has a rounded cutting tip formed in the “Celtic” manner. The sword is tight and secure when in-hand and was most likely made for, and owned by, a clan warrior of some note. The metal parts are in uncleaned patinated condition.

The basket hilt is formed with rounded bars and mounted with two main frontal guard panels which are pierced with hearts and circles, and incised with lines to the borders. Between these at the front, a secondary, smaller, frontal guard panel is mounted and decorated in a similar manner, and incised with decorative grooves and lines which extend along its length. The edges of the three guard plates are finely decorated with fretted triangles and merlons. The side guards are formed with “S” shaped bars.

The basket is of pleasing rounded proportions, symmetrical, undamaged, and well worked from thick metal parts. The pommel is cone-shaped with three sets of triple grooves radiating from the pommel button, similar in form to the grooves filed into the frontal guard panel. The three upper arms of the guard are securely tucked into a pronounced groove cut around the lower half of the pommel.

Of tapering double-edged form the blade is of fine quality manufacture. It has a double fuller each side extending from the hilt through a pronounced ricasso for 10.5 inches (27 cm) along the centre of the blade. The top fuller each side is incised with “IVRGEN AOLLICH” and “INN ARNHEM” in the fuller below, the words interspersed and flanked with patterns of dots. Beyond the fuller terminals a stamp which resembles the head and shoulders of a bishop faces towards the left on each side when the sword is held point upwards. The grip is of spirally grooved wood, covered with shagreen, lacking any binding and the hilt has a leather liner.