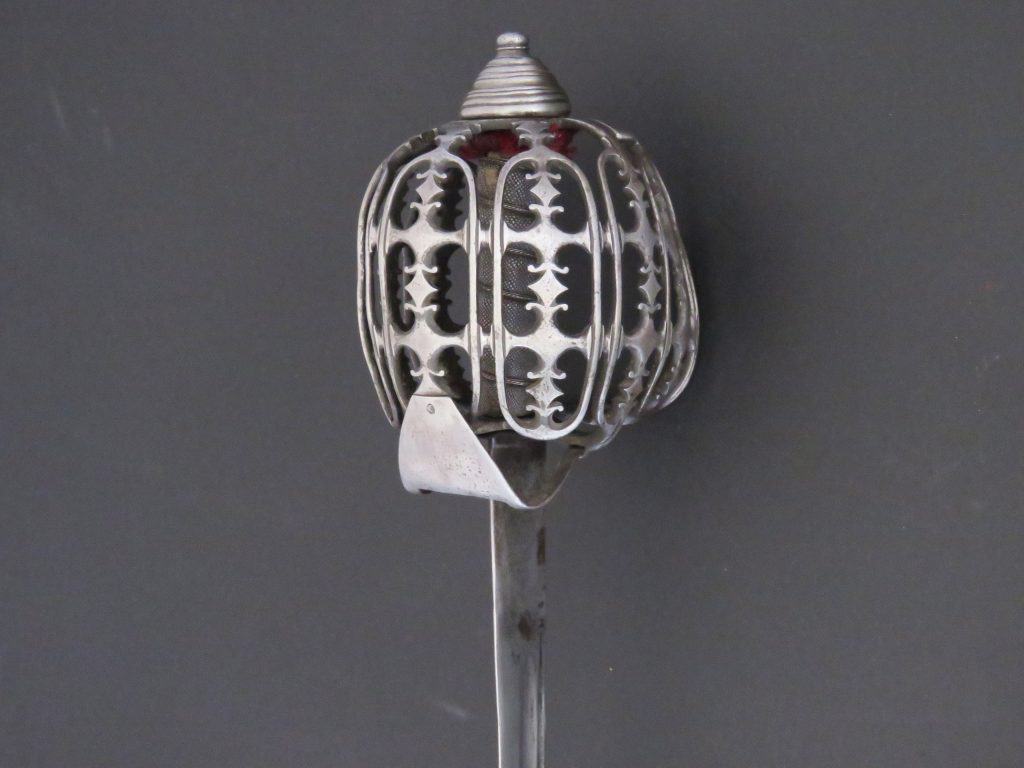 A nice sturdy example of a Scottish Officers’ basket hilted sword of “Pinch of Snuff” type. The attractive and delicate construction of the basket guard identifies this sword as a member of an uncommon and distinctive group of mid 18th century Scottish military officers’ swords. The complex hilt design consists of oval shaped apertures mounted between the structural guard bars which are infilled with an  elaborate lattice of finely wrought iron-work of unusual lace-like delicacy. These swords were carried by Scottish officers on British Army service in Europe and in North America during the American Revolutionary War period.

The sword is similar to three others depicted in contemporary portraits. The first is a painting dating to 1757 to 1763 called “The Pinch of Snuff” by William Delacour, after which the sword type gained its name, and shows an officer in a Highland Regiment, probably on service in the Americas, with the sword tucked under his arm whilst he pauses to take a pinch of snuff. The painting is illustrated in “History of Highland Dress”, John Telfer Dunbar, Oliver & Boyd 1962, Plate 47.

The second shows Colonel William Gordon of Fyvie, in the uniform of the Queens Own Royal Regiment of Highlanders, painted in Rome by Pompeo Batoni in 1766, and illustrated in “The Clans of Scotland”, Micheil MacDonald, Brian Trodd Publishing, 1991, Page 108. The third is a painting of an officer in Highland military uniform auctioned by Christies in 1968 (“Pictures of Scottish Interest”, Glasgow, 2nd April 1969, lot 1).

The earliest dated sword of this type that we know of, is a London-made silver hilted example with makers marks “TB”, which sold through Thomas Del Mar Auctions in London in December 2014, with hallmarks for 1745 (lot 330). This example would indicate that the sword type arrived in the second quarter of the 18th century and thrived until circa 1780. Clearly the style was popular with the Scottish officer class at a time when Scottish regiments were increasingly being mobilised by the British Army for service abroad, and resembled sword types developed in Stirling at the time on contract for the military.

The “Pinch of Snuff” hilt type was manufactured with two styles of frontal guard loop. One form being a plate fashioned into loops, sometimes pierced with a heart, and secured to the front of the hilt by screws as in the manner of our sword hilt, and that featured in the Christies Glasgow portrait commented on above. In the second form the loops are integral to the hilt as in a sword illustrated in “Scottish Swords and Dirks”, John Wallace, Arms and Armour Press, 1970, fig 44 and also as illustrated in the Batoni portrait.

The back sword blade is 35 inches (89 cm) long, of fine robust  quality, with a pronounced fuller extending from underneath the spine to half way down the blade after which it becomes double edged. Beneath this a shallower fuller extends down the middle of the blade almost to the tip.  The “GR” cypher is present either side, between the hilt and the commencement of the fullers, and on one side, beneath the cypher the etched name “GILL”, for Thomas Gill (working in Birmingham 1774 to 1801) is present in capitals. The spine of the blade is also inscribed in capital letters with a shallow etched inscription now worn and feint with the date 178(?). This could well be the name of the maker repeated and the date of manufacture, probably of the early 1780’s, which would be consistent with the early part of Gill’s career and the end of the period of peak usage of this sword type.

The pommel is cone shaped and horizontally ribbed, a type which occurs on other Scottish style hilts and seems to be a Scottish characteristic for some contemporary swords (see two  swords with this pommel type in “The Swords and the Sorrows” ref 1:21 page 32, ref 1:24 page 34 plus the silver hilt ref 1:31 page 37 in same which is similar). The pommel has a pronounced neck which sits comfortably in a ring forged around the top of the basket which is attached to the upper ends of the guard arms.

The hilt retains its original spirally fluted wooden grip with its shagreen covering, silver wire binding and is mounted with a red woollen fringe. The sword is in nice condition overall commensurate with its age.