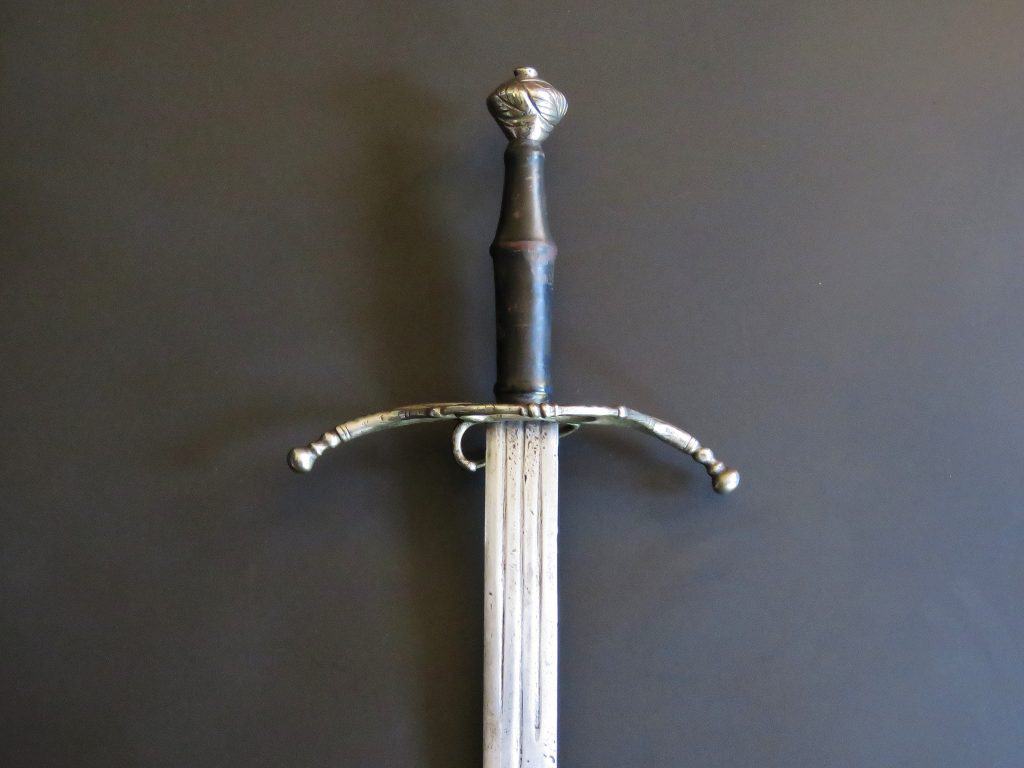 A German or Tyrolean “hand and a half” size fighting sword, of attractive proportions, dating to the first part of the 16th century. A worn Islamic inscription on both sides of the blade indicates that the sword was once captured by the Ottomans as a trophy, most likely in one of the many battles engaged between European and Ottoman forces, as the Empire expanded into the Balkans, Southern Europe and the Mediterranean rim in the late 15th and  16th centuries.

Until the early part of the 20th century many similar trophies were stored at the Istanbul Armoury (now the Military Museum, Asker Muzesi, at Harbiye), and relocated to other locations around the city in turbulent times for Turkey at the end of the Ottoman era, often to insecure and inappropriate storage. Some swords like this dispersed to European collections where they were cleaned and displayed. The story of the sword therefore not only represents the European armourer’s craft in the early 16th century, but also in different ways, the rise of the Ottoman Empire, which it was originally used to oppose, and its decline.

The broad double-edged blade gradually tapers towards its point. A central  fuller extends from the hilt either side for 10 inches (26 cm) which is flanked by two shorter fullers 7 inches (18 cm) in length. Just after the fullers terminate the inscription is applied slightly to one side on each face and the blade is of flattened lenticular section thereafter for the rest of its length.

The middle of the cross is forged as a thick, oval guard bar. The quillons are of rounded section and curve downwards to terminate in large waisted swollen knops. A sloping thumb ring is present on one side and a more imposing guard ring is fixed to the other, strengthened by secondary guard bars which join the sides of the ring with the cross bar. The outer edge of the ring is decorated with knops of similar style to the quillon terminals. The solid pommel is dome shaped on top, decorated with fern-like incised designs, cone shaped below and mounted with an integral button. The waisted stepped grip is of wood covered with leather over a cord wrap.

These large swords were not just for two-handed use. They were designed to be used equally well with one hand by a trained user. In the 16th century “hand and a half” swords were probably not a rare site on European battlefields. As fashions changed towards the beginning of the 17th century they went out of use and today are quite rare compared to the survival rates of two-handed swords which are of the “bearing sword” variety – large, well made, imposing and decorous, but designed mainly to be carried point up in civic procession rather than for use in combat.