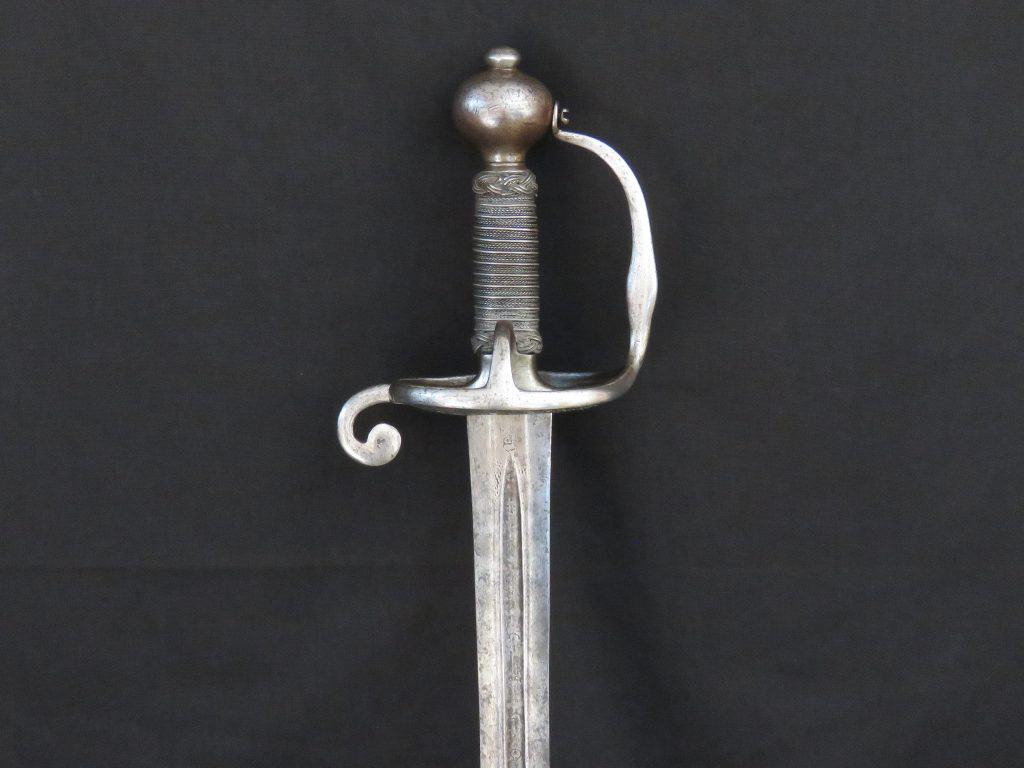 An elegant sword of the distinctive “Walloon” type made for the Amsterdam Town Guard in the mid-17th century. The hilt is formed from a bold quillon block with a scrolled wrist guard to the rear, and knucklebow to the front, swollen in diamond form to the middle, and fixed to the pommel with a screw. The flattened terminal of the curled wrist guard has a florette punched into the centre of one side.

To the sides the hilt is mounted with asymmetrical side rings of crescent form each filled with a plate pierced with a pattern of eight-pointed stars and more numerous smaller circles. The quality hilt type, of well made rounded bars, represents the fruition of European “Infantry” hilt design with plated side rings that started in more rudimentary form in the late 16th century.

The blade is of usual form, long, double-edged, of lenticular section, tapering and with a stretched oval shaped fuller on each side, commencing a short distance from the hilt, extending for 8 inches (20 cm) after which a running wolf mark, most likely the mark of a Solingen based smith, is incised on both sides. Inside the fuller, various spaced capital letters bordered with quatrefoils of dots, form the word “S A G H G O M”, a variant of the more usual “S A H A G O M”, which had numerous manifestations.

On one side, between the hilt and the start of the fuller, the stamp of Amsterdam, a crown with a triple “X” mark below is present, and on both sides, the punched mark of the blade maker consisting of a Letter “P” in raised relief inside a shield with a crown above. The blade is 35 inches (89.5 cm) long and overall the sword is 41.5 (105.5 cm) long.

These swords are assumed to have been used by the Amsterdam Town Guard. However, they survive in quantities which indicate massive numbers were made which would far exceed the needs of an individual city town guard. At the time, Amsterdam was a great trading centre for the widest variety of commodities and manufactured goods, including arms. These swords were a functional, stylish and cost-effectively produced weapon, in high demand,  assembled in Solingen where the blades were made, or possibly Cologne.