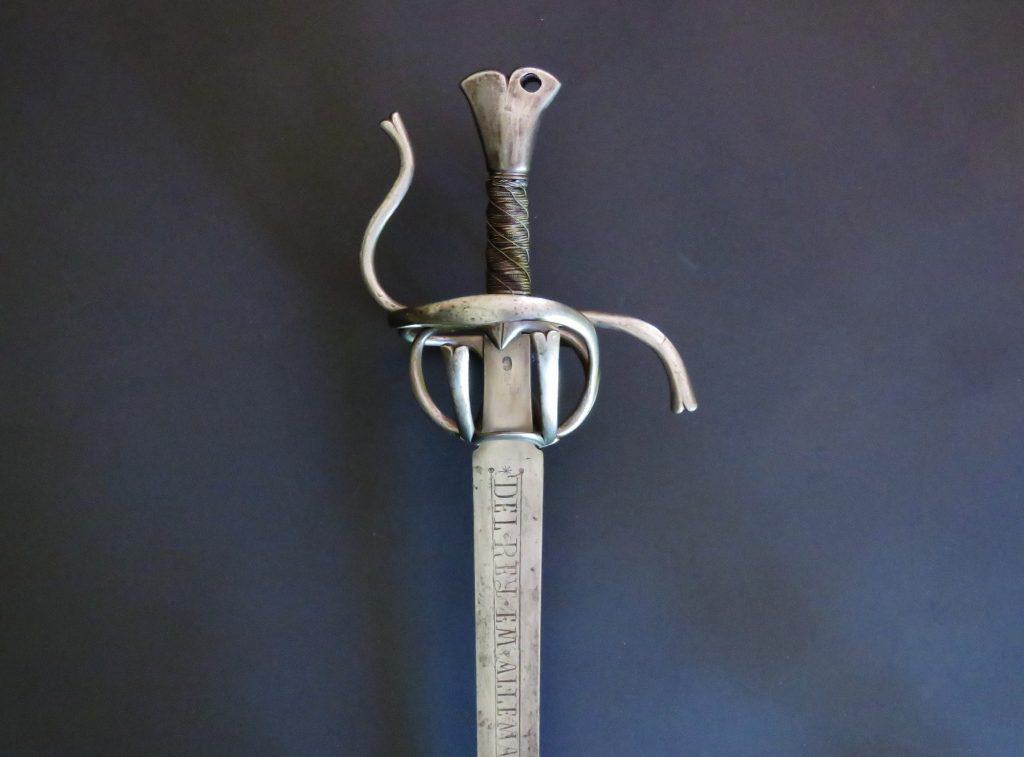 A fine, functional and elegant Tyrolean Broad Sword / Rapier dating to the end of the 16th century mounted with a Toledo marked blade by Heinrich Col. A solid, and well proportioned weapon. Swords of this rare type are present in the Ambras Castle Collection in Innsbruck, Austria, from where its name is derived.

The attractive hilt is formed from a central quillon block at the base of the grip, forged with triangular vertically grooved langets, which extend for a short distance along the ricasso on both sides. From the top of the block the front quillon is formed as a knuckle bow of flattened oval section which curls upwards towards the pommel and terminates in a slightly expanded, grooved, fishtail terminal. Opposite, a rear quillon of shorter length forms a wrist guard which curls downwards from the block with a similar terminal. Underneath, two convex bars curl downwards to terminate left and right of the ricasso in pas d’ane rings.

On the outside a robust and reinforced guard loop extends across the hilt and converges with the pas d’ane rings which are strengthened with a crescent of iron from which two upwardly curved guard bars extend in parallel and also terminate in fishtails. On the inner side a single thick bar extends downwards from the block at the base of the frontal quillon and trifurcates into three rounded bars which attach to the bases of the pas d’ane rings.

The pommel is forged in slightly flattened ovoid form, with a circular collar at the base, and expands towards its fishtail shaped top which is pierced for a wrist thong. The original grip is formed from a base of spirally grooved wood onto which alternate loops of straight and twisted copper wire has been wrapped and moulded into the grooves which are further finished with vertical lengths of twisted copper wire mounted at an angle to the binding. Copper wire “Turks Heads” are mounted top and bottom of the grip.

The double edged blade is stiffened and strengthened towards its point indicating that the sword was intended for thrusting to penetrate joins between plate armour and mail as well as for cutting and slashing. From the hilt the ricasso extends 2.25 inches (5.5 cm) after which the blade expands, is forged in flattened lenticular section and strongly tapers to its point.

To the front the ricasso has an armourers mark consisting of a letter “C” beneath a crown punched in raised relief within a shield, slightly unclear on the right side. Between two incised decorative parallel lines which emanate from the hilt each side is the etched signature “ENRICHE COL ESPADEIRO DEL REY EM ALLEMANHA” beyond which broad orb and cross marks are etched. The bladesmith mark and the signature are of Heinrich Col who was a German bladesmith from Solingen who worked in Toledo and Germany. Cf. Seitz I, p. 344, and II, p. 268.

The sword is in fine condition with no repairs or breaks to the guard bars. It has minor age related blemishes on the blade commensurate with its age. Overall length 40.5 inches (103 cm) blade 35 inches (89 cm).