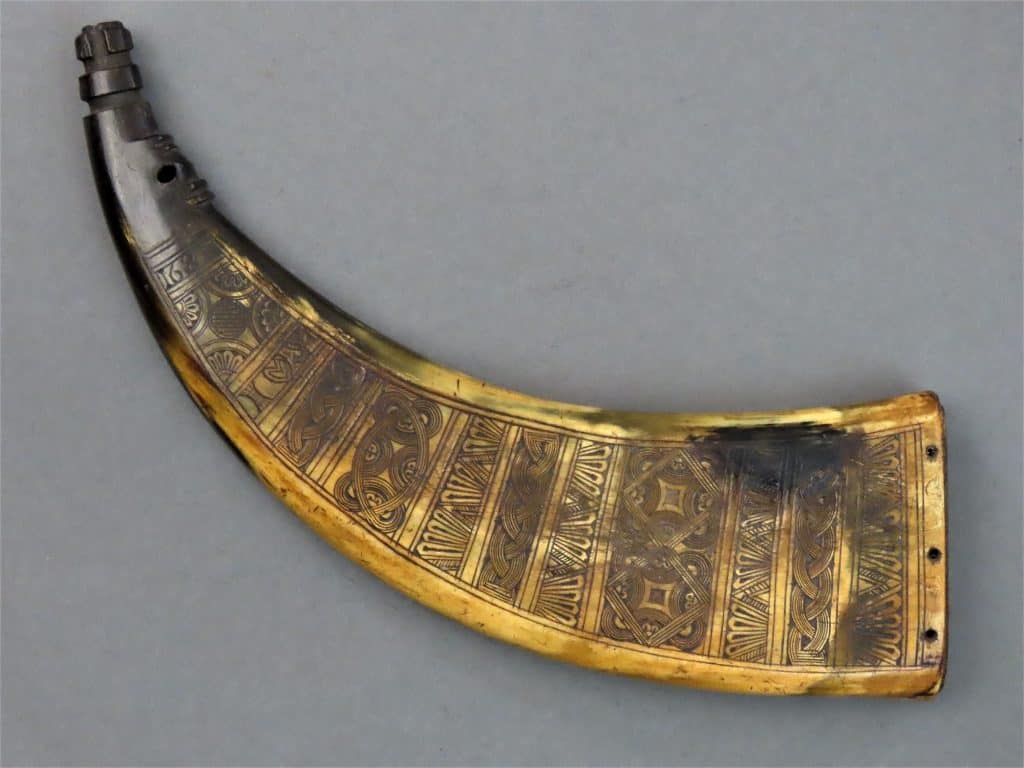 A well-formed and beautifully engraved late 17th century Highland Scottish powder horn dated 1683. The patterns present on horns of this type are like other Celtic / Gaelic cultural motifs which appear on contemporary targes, dirk handles, sporrans and plaid brooches associated with “Highland” Gaelic craft manufacture and art of the time.

The flask is fashioned from the pointed end of a cow horn which has been heat-softened, pressed into shape then allowed to re-harden. The outer side is profusely decorated with panels of typical Celtic / Gaelic interlace, scrollwork and fans within lined borders. The reverse side is plainer and decorated with three cross-hatched bands inside a larger panel cut in contour with the shape of the horn.

The base is filled with a broad wooden plug originally secured from the side with wooden pins which are now missing. These horns were filled from the nozzle which was both reinforced and given weight to assist with accuracy in pouring by the application of lead to a lattice of deeply cut ridges which is now missing. Originally a stopper would contain the powder in the horn which is also now absent. A little way from the muzzle on the concave side a raised ribbed aperture is formed as a suspension loop. A second loop was once attached to the base plug.

Beneath the stopper on the most decorated side the first rectangular cut panel contains the date 1683. A cartouche of fans surrounding a shield separates this from another panel which contains the initials “I S”, separated by a heart, which are presumably of the owner. The heart shape is a common motif in Scottish Highland Gaelic design.

Horns like this were made by horners settled in the Highlands, and around the fringes, near markets and gun making centres, in a period when firearms were gaining great popularity in the Scottish Highlands. Surviving dated horns indicate that the peak period of the best quality manufacture was from the mid 17th century to circa 1700. This horn corresponds to “Type A”, in Whitelaw’s classification system, which are “Horns with their surface divided up by cross bands of interlace and fan ornament, with one or two square or oblong panels”.

For further examples of Highland powder horns see “The Swords and the Sorrows”, National Trust for Scotland, 1996, pages 73 to 75, and the accompanying article by Jackie Mann.

Overall the horn is in good condition compared to its surviving contemporaries.  There is a minor repair near the plug, a small crack where the horn as shrunk around the plug and minor flaking on one side where the wooden pins once secured the plug. There are minor scratches and overall wear which is not unusual.  The overall length, measured from extremity to extremity is  just under 11.5 inches ( 29 cm). The base is 3.25 inches long (8.25 cm).