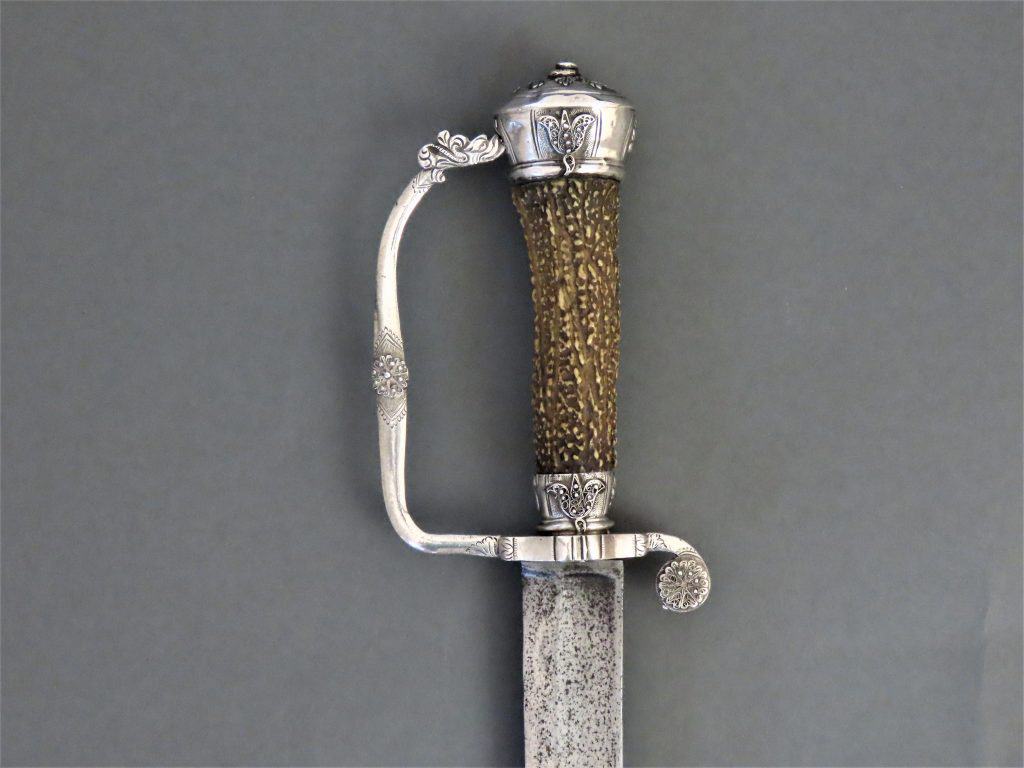 An English silver mounted hunting hanger with London Britannia Standard Hallmarks for the year 1697/1698 by the silver smith and cutler Henry Hurst of London. The hilt is of exceptional quality and applied with delicate and highly detailed decorative silver filigree  panels onto the mounts.

In the 17th and 18th centuries when swords were a popular weapon for gentlemen, hangers were a robust secondary side arm used for self defence when walking about town and travelling in general. Although referred to as hunting hangers, they in fact had little use in hunting. Self defence in crowded areas, and in the tight confines of London’s dangerous alleyways, required a weapon which was shorter than a sword for close-in use in these confined spaces. Hunting hangers appear in some military portraits of the time and were carried by some officers in the British Army and Navy. Towards the end of their popular use, they were slimmed down and refined for wear as a gentleman’s fashion accessory.

The high quality hanger described here was almost certainly a gentleman’s weapon. The knuckle bow is stamped with Henry Hurst’s Britannia Standard maker’s mark of “HV” in raised relief inside a depressed shield with a crown above. The lion’s head, date and Britannia Standard stamps lie alongside.

Hurst lived in exciting times as London was remodelled after the turbulence of the Civil War period, plague and the Great Fire of 1666. Towards the end of the 17th century the city was more outward looking. International trade was growing through London port, military success was being achieved abroad and more interest and investment was being expressed in art and culture. Hurst was one of a group of leading cutlers of his day and the quality of his work represents the evolving style and fashions of late 17th and early 18th century Baroque London.

The hilt of this sword is comprised of a bold faceted quillon block with a downward facing flattened disc-shaped rear quillon applied each side with a filigree design. The knuckle bow is chased with further filigree panels applied either side of its swollen middle. The top rises to a foliate based monster-head terminal hooked into the pommel-cap. The pommel is formed with a broad cap with a circle of outward facing leaves radiating from the pommel button. The sides of the cap are applied with further filigree panels front and back and chased with floral ornament. The grip is of stag antler with a ferrule at its base decorated in a similar manner to the pommel sides. The pommel sides and the base ferrule to the grip are moulded to the contour of the antler grip. Some of the filigree panels are circular in shape and others are shaped as tulips probably in recognition of the Dutch origins of King William III who was on the throne at the time.

The curved single edged blade is of plain curved form. It is 20 inches long (just under 51 cm). It has a broad shallow fuller which extends almost from the short ricasso almost to the pointed tip.

Henry Hurst was a citizen and cutler of London having been apprenticed to William Hurst and sworn “free” of the Cutler’s Company by servitude on 29th September 1691. He is recorded with his wife and his apprentice, Thomas Kenniday, in the poll-tax return for the First Precinct Ward of Aldersgate Without, London, for 1692 (Corporation of London Records Office).