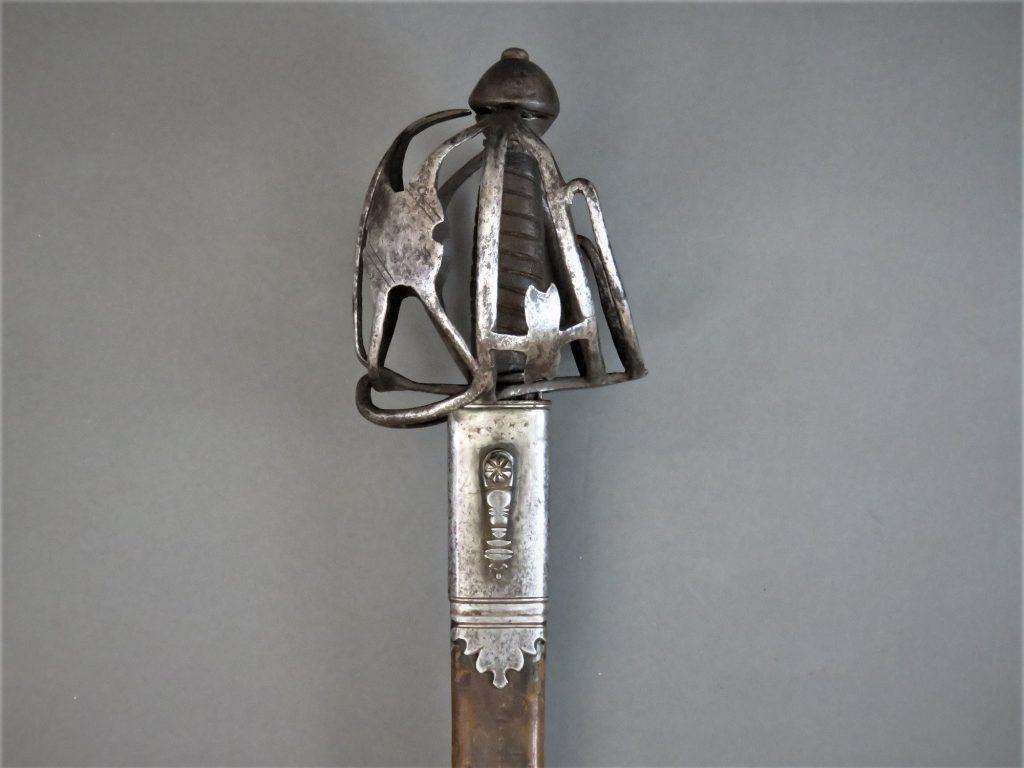 This early type of Scottish basket hilted sword is described as “Irische” (Irish) by English sources from circa 1600 onwards.  From this English perspective the term Irish refers to the Gaelic language which was spoken in the Scottish Highlands, as well as in Ireland, and points to Scotland as the origin of the basket hilted sword in Britain. English  armourers copied the hilt form from the Scottish template and developed it further on different lines. The result was two forms of “Irish” hilt which developed in both regions from the late 16th century, into the English Civil War period, and further until the fully formed basket hilted sword emerged. The type of sword described here, amongst other types, was most certainly used in Scotland at the time of Montrose’s campaign.

The robust hilt is fashioned from sturdy bars which are well rounded on the outside. It has a pleasing oval outline having maintained its original shape without damage or repairs. Three structural bars form the core of the guard which curve upwards towards the pommel from the cross guard; the knuckle bow from the front and the side guard bars from the sides. Below the cross, the frontal loop guard bars are a downward continuation of the side guard bars which loop forward to join the base of the knuckle bow at the front. To the front, in the spaces between the knuckle bow and the side guard bars, two saltire bars are attached with guard plates in the middle. To the rear, two secondary guard bars curve upwards from the rear quillon to attach to the  side guard bars near the pommel. Between these at the base, merlon bars have been attached to strengthen the structure.  The pommel has a dome shaped button on top. The baluster shaped wooden grip is spirally grooved, lacks its cover, and retains leather washers top and bottom.

This sword is a Scottish representation of the sword type rather than English as indicated by a number of features. The guard plates to the front are indented at the sides and decorated with sloping parallel lines which form an incised diamond shape on each. The dome shaped pommel has a chiseled groove around its middle which secures the main guard arms. The cross guard has a stubby rear quillon and a cut groove underneath which helps secure the ricasso shoulders of the blade and prevent movement.

The single edged blade is 32.75 inches (just over 83 cm) long. It has a ricasso which extends for 2 inches (5 cm) from the hilt. A pronounced fuller extends from the hilt along the ricasso edge and underneath the spine of the blade until it becomes double edged some 5.5 inches (13 cm) from the tip. A second broader fuller extends from the hilt and runs underneath the first almost to the blade tip. A third fuller, of the same width as the first, runs underneath the second fuller for a similar length . The blunt edge of the ricasso has a fourth shorter fuller near the opposite edge to the first and terminates where the sharp edge of the blade begins. On one side in the shallow fuller the name of the blade maker “CLEMENS WILHELMS” is stamped flanked by patterns of dots beyond which an orb and cross mark also appears. On the reverse side flanked by similar designs the place of manufacture is recorded “ME FECIT SOLINGEN” (I was made in Solingen). Solingen was one of the main blade making centres in Germany at the time and made high quality blades. Many Solingen blades were imported to the UK due to the lack of an established blade making industry there which was something of an embarrassment to the British military. The overall length of the sword is 38.25 inches (97 cm).

The sword is contained in a scabbard made from thick brown leather stitched at the rear and tooled with primitive dot and line designs to the front. It lacks its chape. The mouthpiece has a rim and decorated with horizontal lines and shaped bottom edge to the front. The scabbard is of later date and may have been an association made in the later working life of the sword. Scottish swords had long working lives and there is no reason why a sword made in the early 17th century could not still be in use in the Jacobite periods.

The hilt closely resembles the baskets of a number of swords illustrated in “British Basket-Hilted Swords” by Cyril Mazansky (Boydell Press 2005) and in particular three swords illustrated on pages 80 / 81, references D9, a sword at Brown University, USA, ex-Mazansky Collection, D10(1) in a private collection and D10(2) a sword in the Marischall College, in Aberdeen, Scotland.

The sword is in good robust condition with some light crusts of old pitting around the hilt and a “salt and pepper” aged texture all over. For further examples of the “Irische” hilt sword type see “British Military swords 1600 to 1660”, Stuart C Mowbray, Mowbray Publishers, 2013, pages 110 to 126.