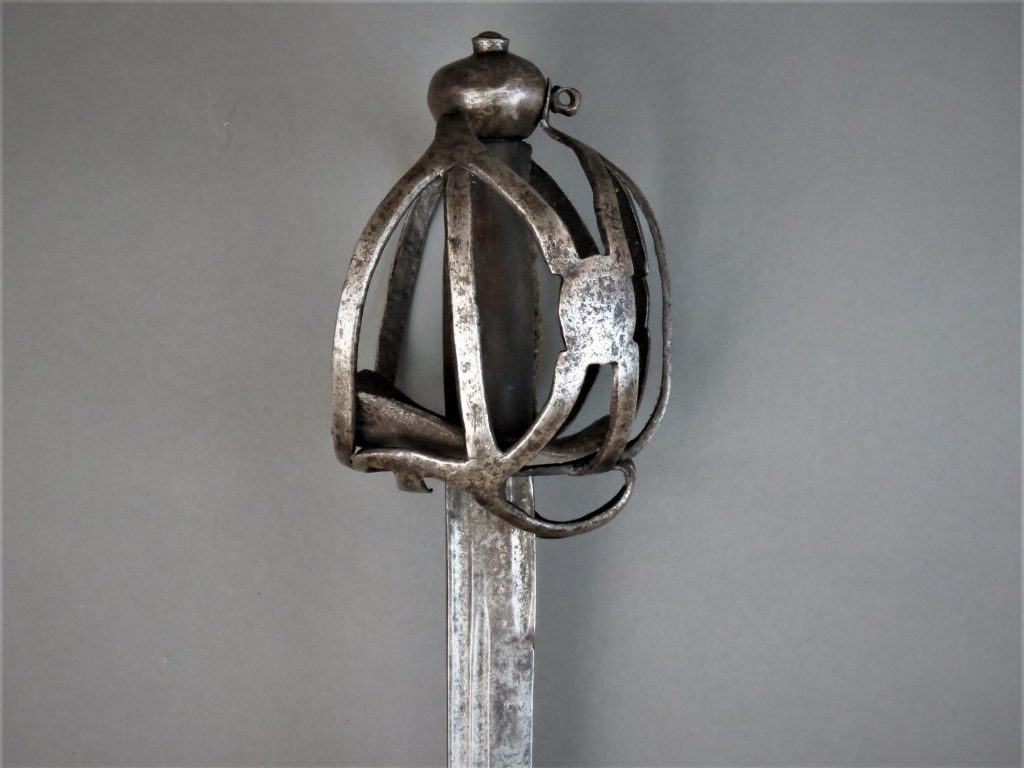 A functional, robust, and distinctively English basket hilted sword dating to circa 1620 to 1640. From around 1600 English sources refer to this hilt type as “Irische” (Irish). From the English perspective the term “Irish” related to the Gaelic speaking region which included both Ireland and Highland Scotland, where the earliest British basket hilted swords appeared in the late 16th century. English armourers copied and further developed the Scottish style into this hilt type. Swords of this “Irish” type had a long life but were going out of fashion as the English Civil War loomed. This sword is mounted with a rare English Hounslow made blade.

The basket guard is in original solid condition and formed from thick flattened iron bars. The hilt is formed with a knuckle bow which curves upwards from the cross guard front and is secured to the front of the pommel with a large pierced headed screw. The side guards rise from the cross guard to butt against the pommel sides. Below the cross, the frontal loop guard bars are a downward continuation of the side guard bars which loop forward to join the base of the knuckle bow at the front.

To the front, in the spaces between the knuckle bow and the side guard bars, two saltire bars are attached with small rounded guard plates in the middle. Each plate is decorated to the front with a series of grouped hollow dots, each group arranged as a number “5” appears on a dice, now worn. To the rear, two secondary guard bars curve upwards from the rear quillon to attach to the structural side guard bars near the pommel. Between these at the base, merlon bars have been attached to strengthen the structure.  The large globular pommel has an integral raised urn shaped button. The baluster shaped wooden grip is covered with leather stitched into place. The hilt retains a leather liner.

The single edged blade is 33.75 inches (86 cm) long. It has a ricasso which extends for just over 2.5 inches (5.75 cm) from the hilt. A pronounced fuller extends from the hilt along the ricasso edge and underneath the spine of the blade until it becomes double edged some 12 inches (30.5 cm) from the tip. A second fuller commences from the end of the ricasso and runs underneath the first to terminate approximately 7 inches (18 cm) from the tip. A third short fuller extends for 2.5 inches (5.75 cm) from the hilt along the ricasso edge, opposite the first on each side, until the sharp edge of the blade begins. An inscription repeated each side of the blade is struck twice, one above the other, inside the first and second fullers, and reads “HOVN” for Hounslow followed by “MLACIT”, with punched diamond shapes between the two words and at  either end.

Records show that blades were made at Hounslow from circa 1620 at a time when Britain, to the embarrassment of its military establishment, was dependent on foreign imports of blades because there was no established blade making industry at home. The fledgling industry was assisted by emigre blade makers from Germany that had settled in England. The first water-powered sword mill was opened in 1630 at Baber Bridge, near East Bedfont, by Benjamin Stone. By then a number of English blade makers had learned their craft and were working alongside the German smiths and often signed their blades with their names alongside a reference to Hounslow as the place of manufacture, as was German practice.

The stamped word “HOVNS” on the blade of our sword is an obvious enough abbreviation of Hounslow but if “MLACIT” is the mark of a maker we do not yet know who this is. Most likely it is a corruption of the phrase “ME FECIT” (HE MADE ME) often applied to blades by German smiths after the name of the town in which they were made, most usually Solingen, and sometimes the individual smith, to indicate the source of manufacture. Feasibly the intention of the the inscription reads “Hounslow made me” (I was made in Hounslow). Blade making at Hounslow reached its peak providing blades for the Parliamentary Army during the English Civil War period, then went into decline, and was all but finished by 1660. Stamped Hounslow blades are rare, and sword blades of this type particularly so, given that Hounslow was mainly noted for its manufacture of hanger blades.