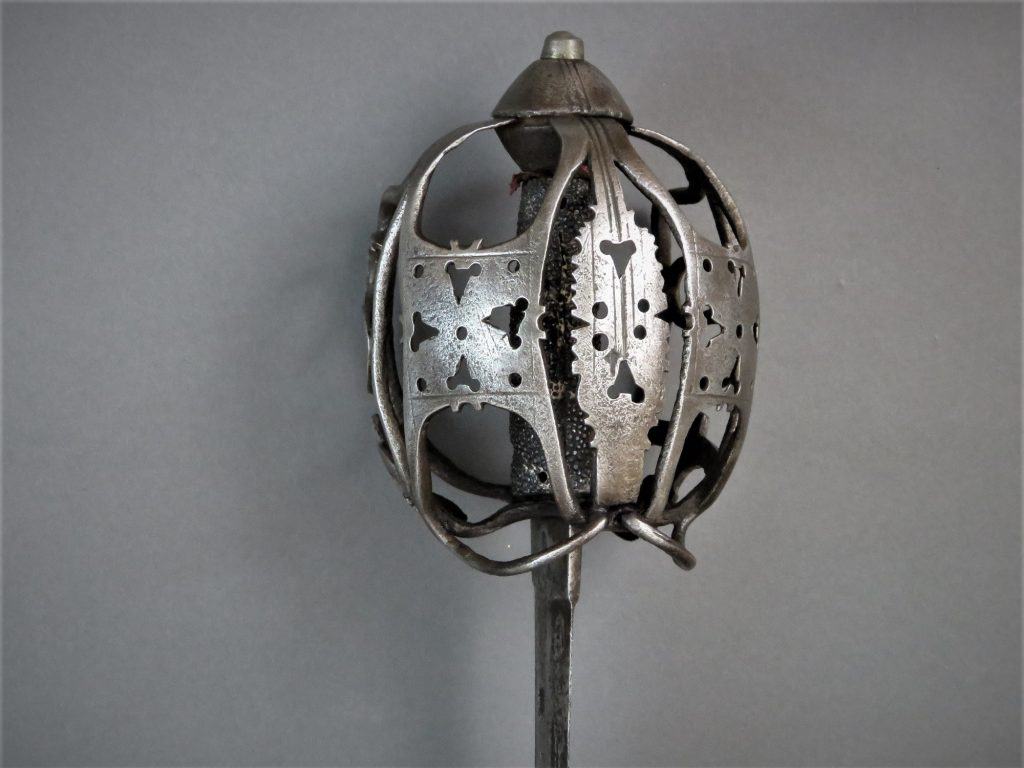 A Scottish basket hilted sword dating to the late 17th century. The “ANDREA FARARA” blade is stamped with the Royal Arms introduced by James I of England / VI of Scotland to represent the whole of his realm. These arms were used by the Stuart monarchs through the 17th century until 1707. The shield has a crown above and is quartered inside with four sections filled with the three lilies top left, representing the continued British claim to the crown of France, and top right, with the Lion Rampant of Scotland. Bottom right the three lions of England are represented and bottom left the harp represents the incorporation of Ireland into the realm.

The basket guard retains its rounded proportions and is well worked from thick metal bars. The basket is mounted with two main guard panels to the front which are pierced with four triangles with the points towards the middle and the outer corners are emphasised with circles. Further similar pierced circles are present towards the corners of each plate. The secondary, smaller, frontal guard panel is decorated with similar shapes. The main plates are cut with border lines and the frontal guard is cut with vertical lines which extend from its middle area  towards the pommel. The edges of the plates are fretted with merlons, crescents and triangles. The side guards are formed with “S” shaped bars with decorative merlons beneath pierced with circles and cut with decorative lines.

The pommel is cone-shaped decorated with four sets of triple grooves which radiate from the pronounced pommel button. The three upper arms of the guard are securely tucked into a groove cut around the middle. The spirally grooved baluster shaped grip is covered with shagreen. It lacks its wire binding and retains the remains of a leather liner at the base and the remnants of a red fringe at the top. The sword is tight and secure in-hand.

Scottish basket hilts with “S” Bars are not excessively rare but they do not appear for sale often compared to other types. The “S” feature is probably a throw back to earlier ribbon-hilted basket guards, and other early Scottish basket forms, which were manufactured with more rudimentary “S” bars in the hilts.

Of tapering form the blade is of fine quality and probably of Solingen manufacture. The cutting edge is much used and damaged with nicks from the impact of other swords. No effort has been made to smooth these out indicating that the sword was retired shortly after this damage was sustained. Originally the blade was a double edged “broad sword” blade. One edge, now the back edge, has been filed down to create the blunt spine of a now single-edged blade. It is possible that what is now this blunt back edge was once the front edge that may have sustained similar damage through use, was filed out, and the blade remounted in reverse.

The blade has a short ricasso inside which on one side the royal arms have been struck. From the end of the ricasso the blade is of flattened hexagonal section for 6 inches (15 cm) after which it is of lenticular section to the tip. In the middle of the hexagonal section either side four Kings Head armourer’s marks are stamped roughly equally spaced about 1.5 inches (4 cm) apart along the blade. The name “ANDREA” is stamped on one side, two letters between each head, and the name “FARARA”, similarly spaced on the other. The row of marks and the letters are flanked each side by a double fuller. The blade is missing a tiny portion at its  extreme tip. The blade is 33 inches (84 cm) long and overall the sword is 38.5 inches (98 cm) long.

For a similar sword hilt see Cyril Mazansky, “British Basket-Hilted Swords”, The Boydell Press, 2005 fig E5c page 89, for a hilt signed by John Allan, Armourer in Stirling, now in the Marischal College Museum in Aberdeen in Scotland (this sword has had a wrist guard added to the hilt in its later life whereas our sword hilt is in original condition, of early style, having not been forged with a wrist guard).

The condition of the sword is fair, lightly pitted overall in an even manner. The hilt retains its shape and is without noticeable damage or repairs.