This fine pair of pistols was in private ownership with a single family line from at least 1817 until they were sold at Christies in London in 2008. They were the property of Lieutenant-General Hugh Percy, who lived from 1742 until 1817. He had served with distinction in The American Revolutionary War. As Commanding Officer of the relief column at the Battle of Lexington and Concord in 1775, Percy saved the retreating British forces from total defeat. A year later as a Divisional Commander, he was engaged in the Battle of Long Island and led the storming of Fort Washington. Despite his achievements Percy was disgusted with the way his commanding officer General Lord Howe was conducting the war and resigned from the army in 1777. 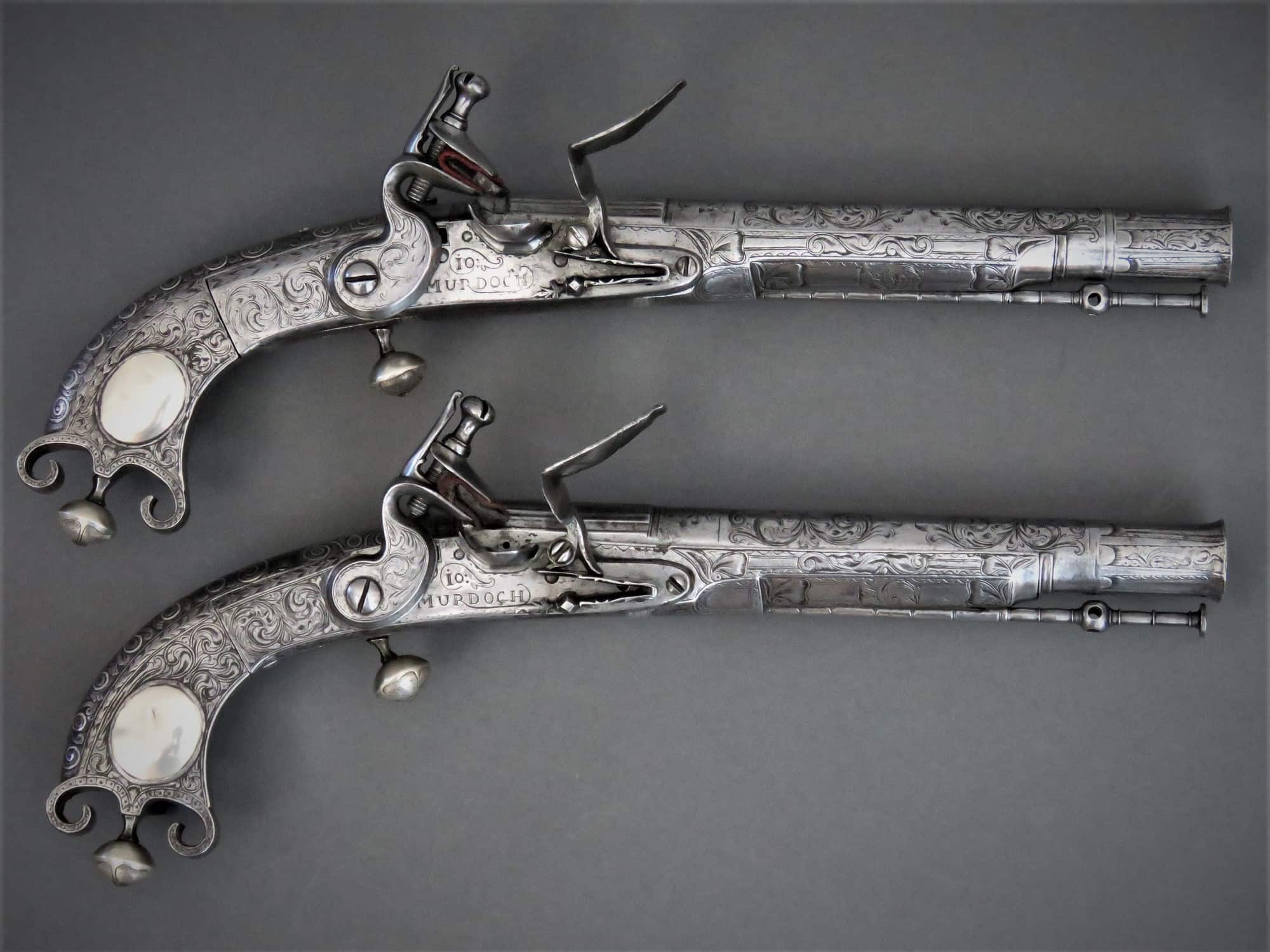 In 1786 Percy succeeded his father as 2nd Duke of Northumberland and continued a program of agricultural improvements already underway at his estate at Alnwick in Northumberland.  He held twice-weekly meetings at Alnwick Castle with tenants and tradespeople which were organised and attended by the estate manager, a Mr Wood. Presumably as a mark of his esteem the Duke made a present of the pistols to Mr Wood in whose family line the pistols remained until 2008. 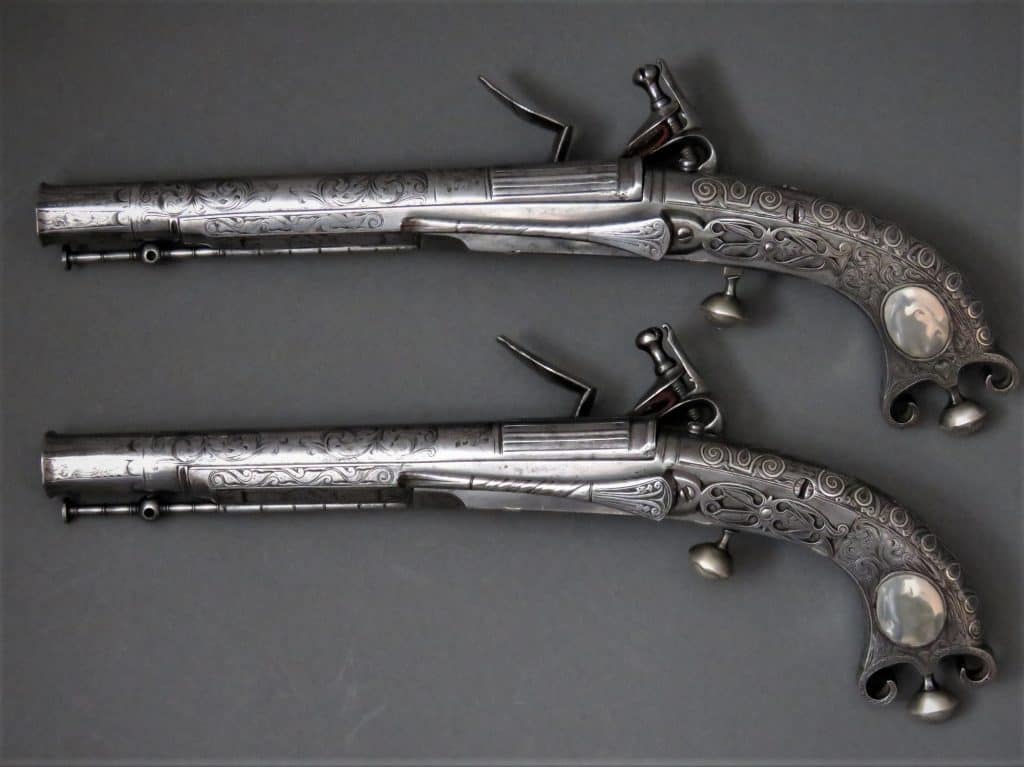 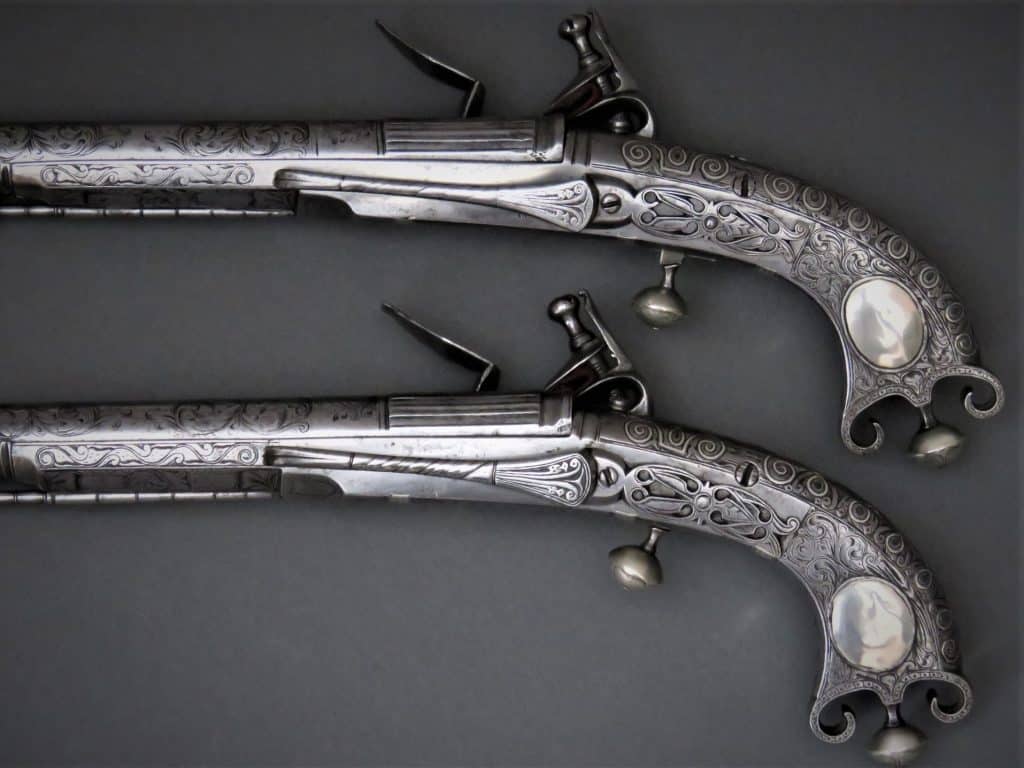 Little is known of John Murdoch. A note in the Statistical Account of Scotland, Vol. XX, p.86, for the year 1798, suggests that he was apprenticed to one of the Doune based pistol makers in the family line of Caddell, the dynasty that established the pistol making industry there in 1646. It continues to say:

“The trade is now carried on by John Murdoch, also famous for his ingenuity in the craft and who has likewise furnished pistols to the first nobility of Europe. These pistols were sold from 4 to 24 guineas a pair… when Mr. Murdoch gives over business, the trade, in all probability, will become extinct’. 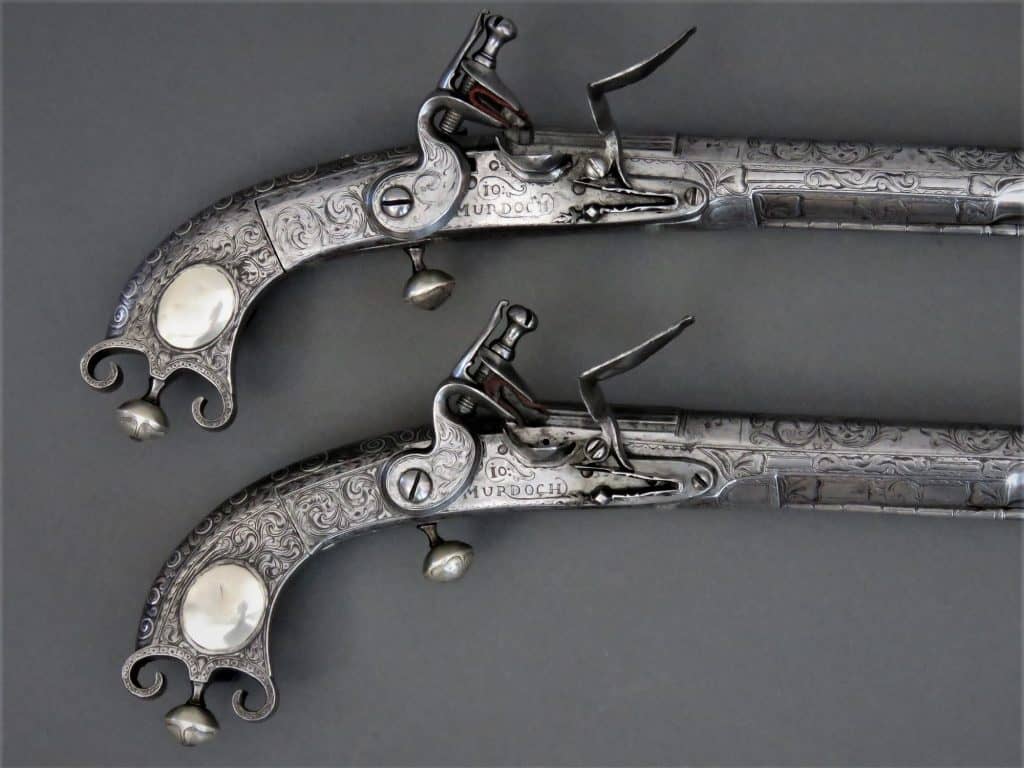 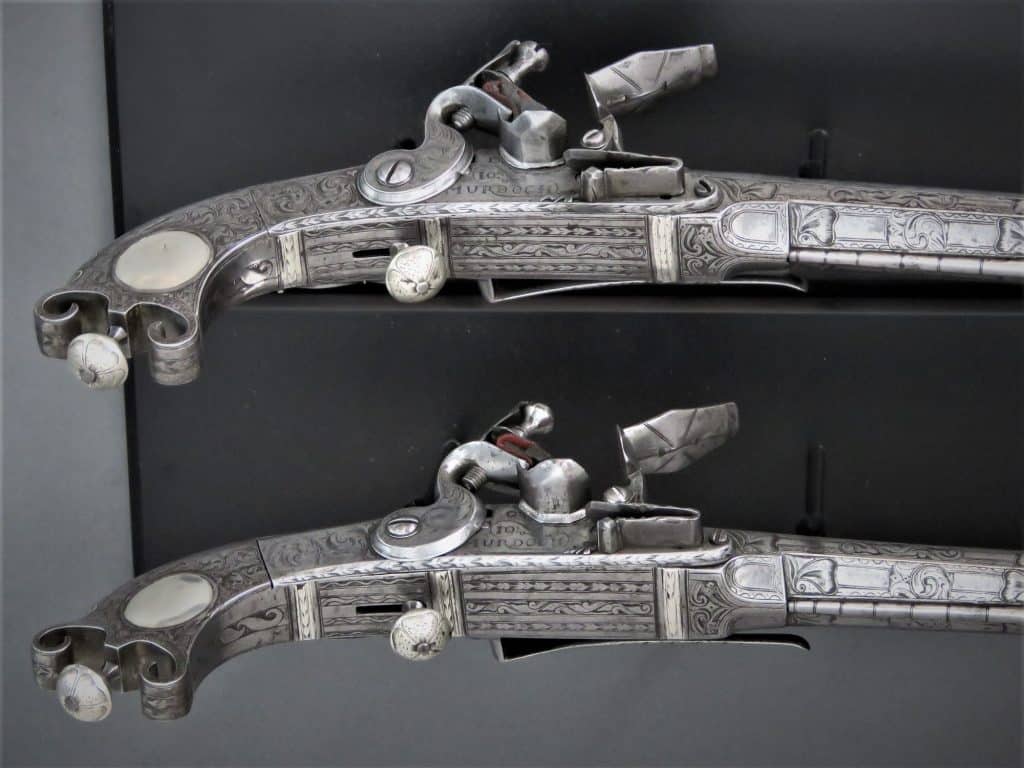 It seems likely therefore that John Murdoch was the last traditional pistol maker to still be in business in Doune at the end of the 18th century. It is not known precisely when he started and ended his career, but it was certainly a long one, a period covering the hiatus of Doune as a pistol making centre through to the end of its decline. The earliest pistols made by John Murdoch are thought to date to circa 1740 (Note 1) and he probably worked into the early 1800’s and died in 1812. 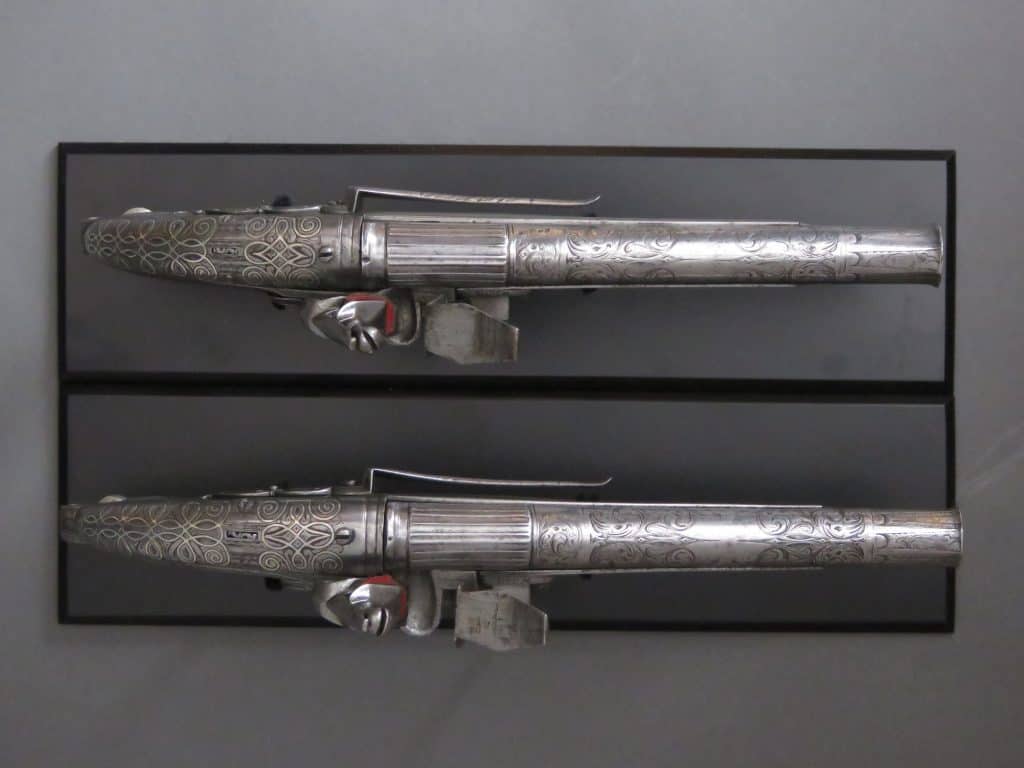 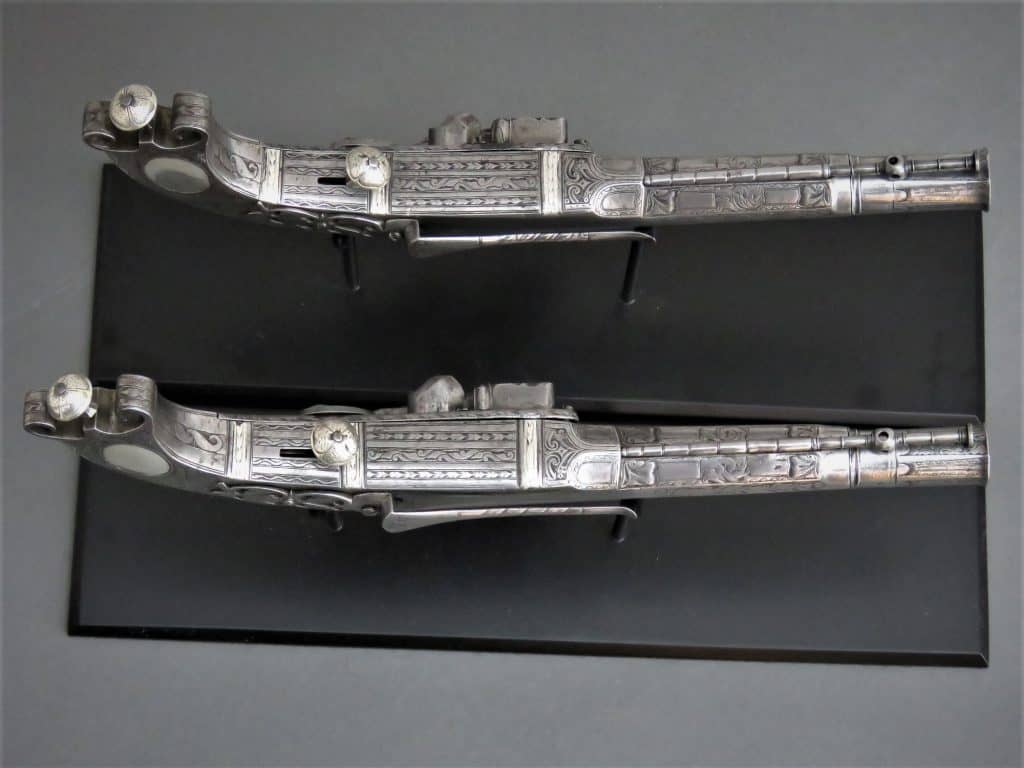 The pistols discussed here date to the mid part of the 18th century and presumably were carried by Hugh Percy when he was on service in North America with the British Army during the Revolutionary War. In this respect the pistols have much in common with another pair by the same maker which are also associated with the War, and which by repute, belonged to a Major John Pitcairn. Some witness accounts credit these pistols with being used by Pitcairn to discharge the first shot of the conflict. 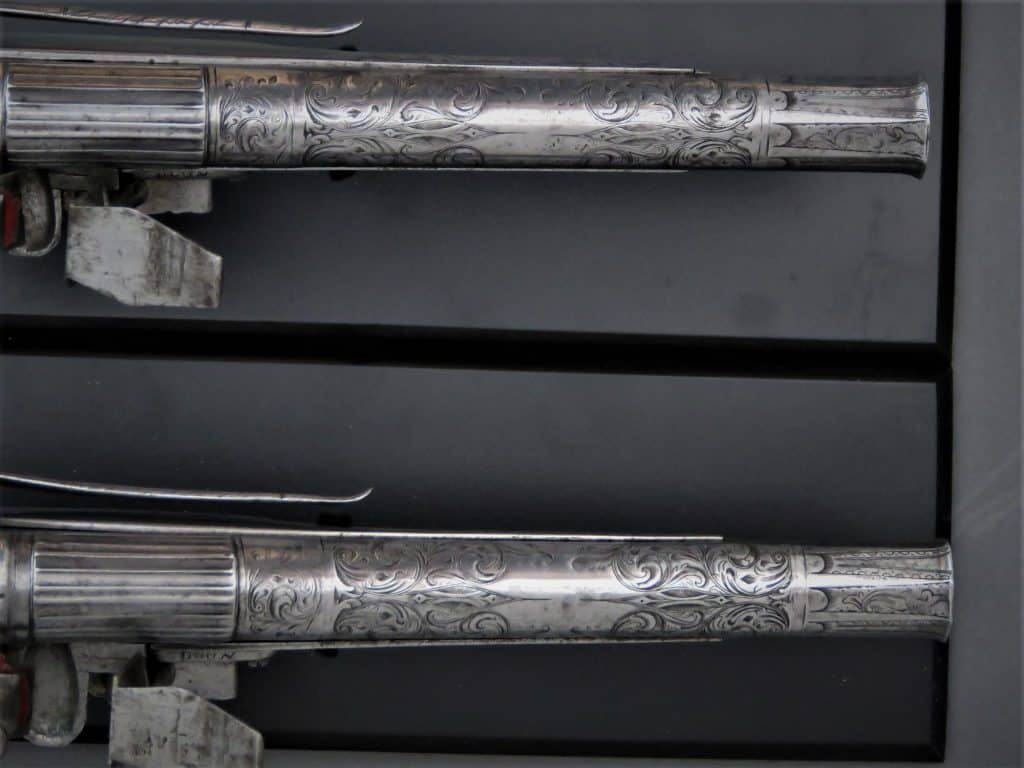 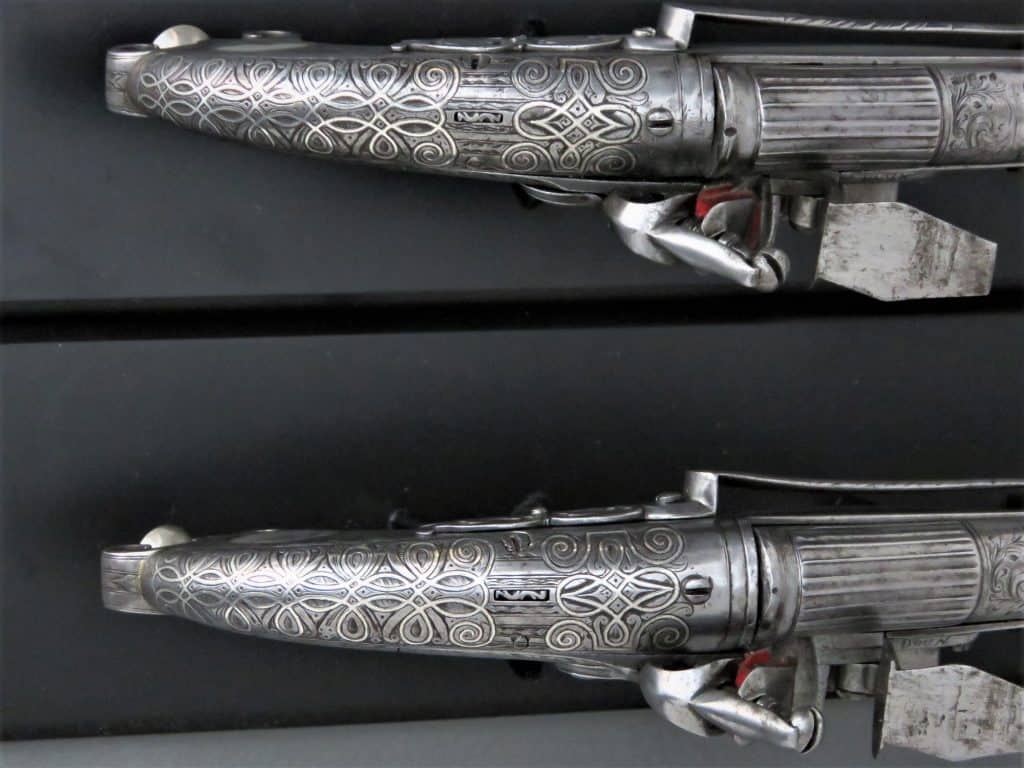 Pitcairn was an officer in the Royal Marines and led the advanced guard of the British raid on Lexington and Concord, Massachusetts, on 19 April 1775. His pistols were captured after his horse threw him during the action at Fiske Hill near Concord and bolted into the American lines, where the pistols that he carried in his horse furniture were captured by an American militiaman (Note 2). The pistols were acquired by Major General Israel Putnam who carried them during the War. They are now in the Lexington Historical Society collection (Note 3). 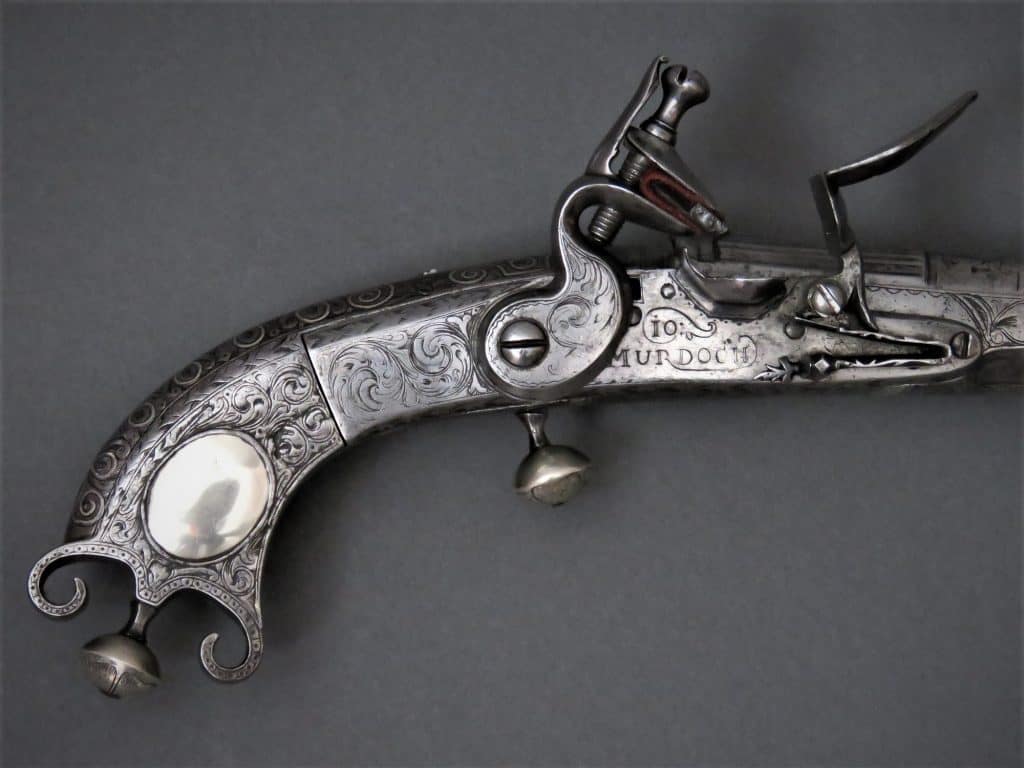 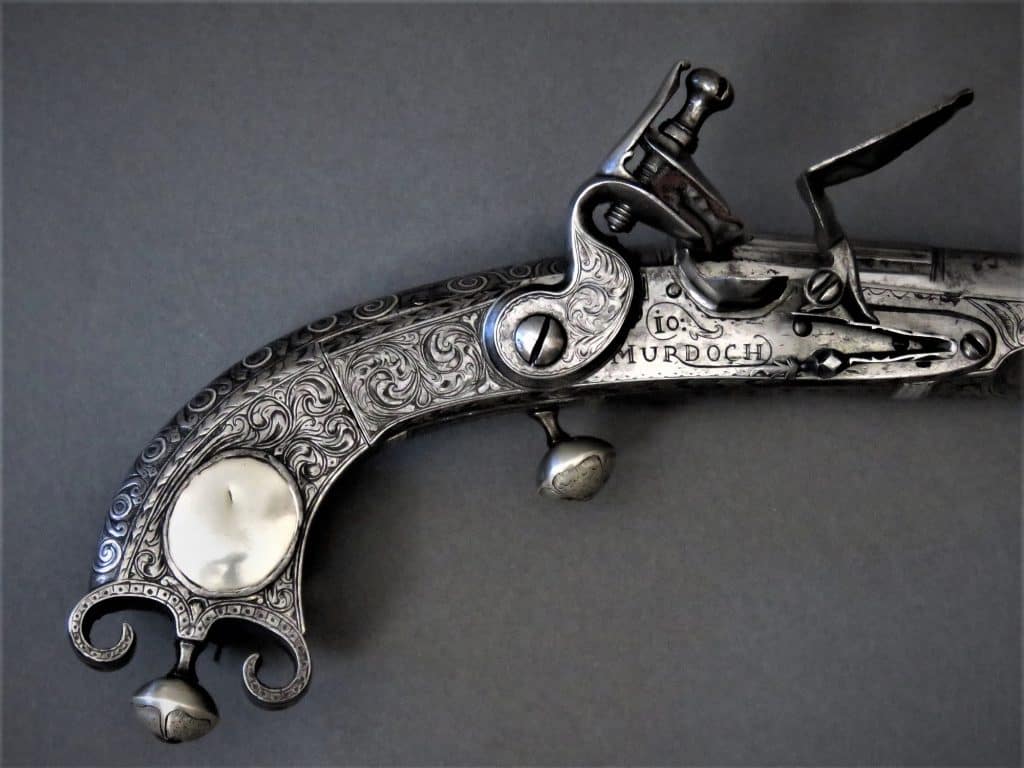 Our pistols are typical of the high standards of craftsmanship associated with Doune and John Murdoch. The four stage barrels have fluted breeches with notched back-sights and flared muzzles with octagonal sides engraved with fine scrolls. The middle sections of the barrels are rounded and boldly engraved with panels of scrolls and foliage. 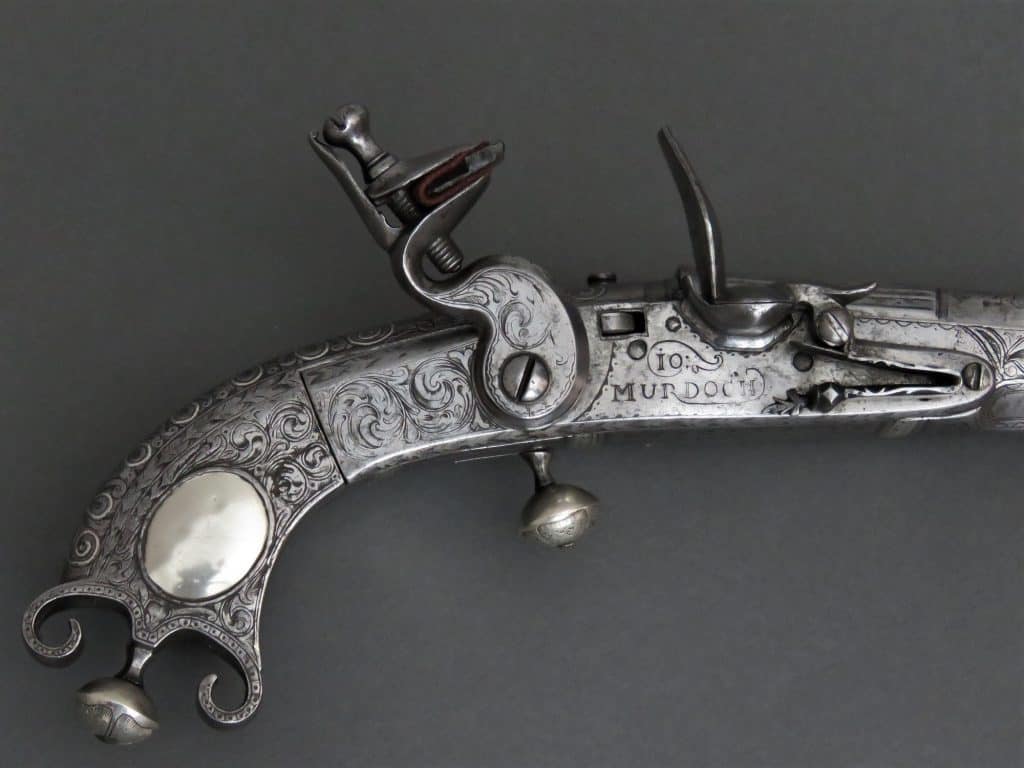 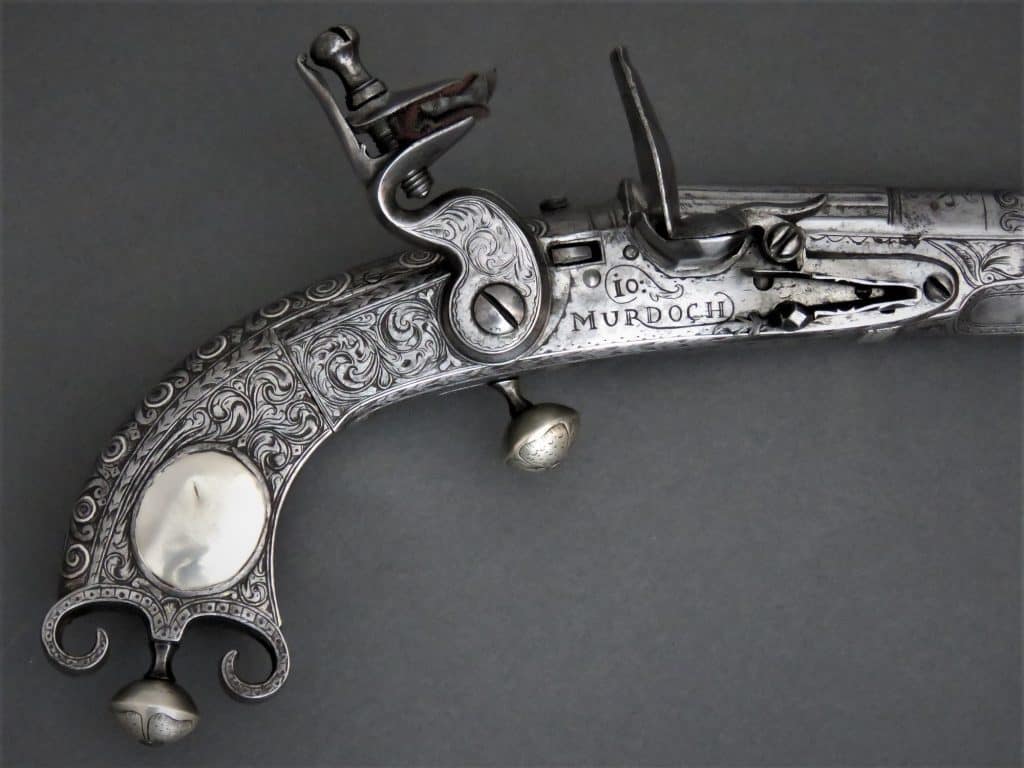 The spines of the butts are engraved with a pattern of intertwined silver scrolls of descending width in contour with the stocks to terminate at the scroll butt terminals which are enhanced with further incised scrolls and foliage. A vacant silver oval escutcheon is bedded into the side of each grip, any original engraved designs now worn away. The fore ends are engraved with scrolls, acanthus leaves, linear designs, chevrons and border ornament on four planes. The button triggers and prickers are formed from cups of silver brazed together and engraved with four petals which radiate from the tang ends. 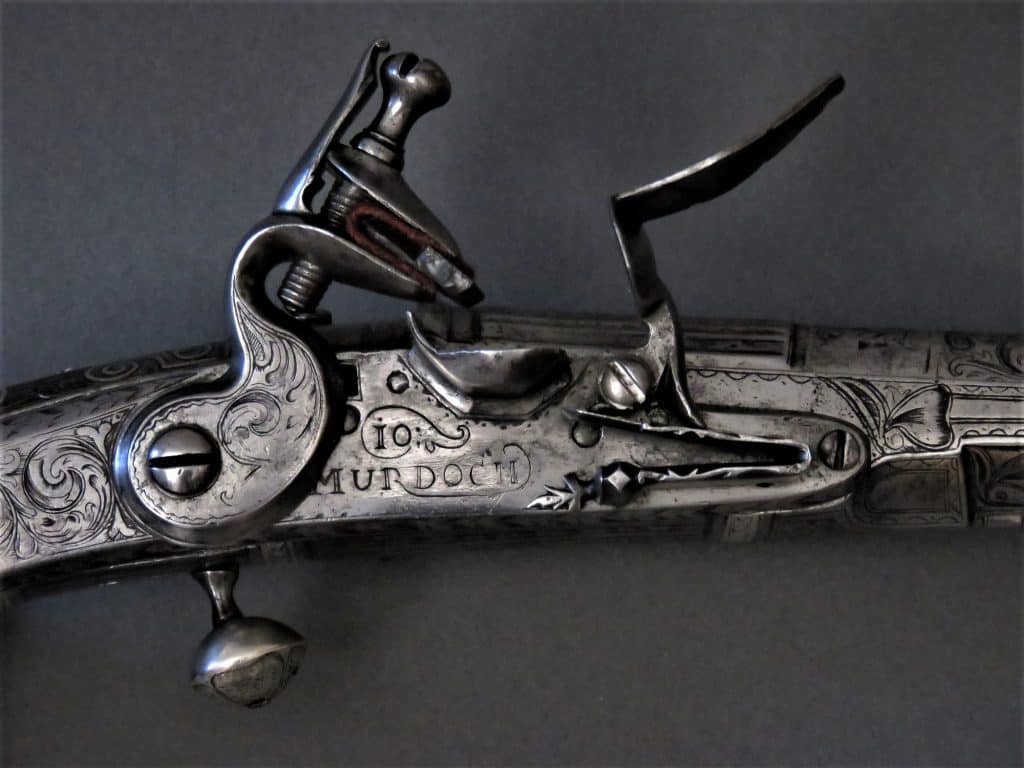 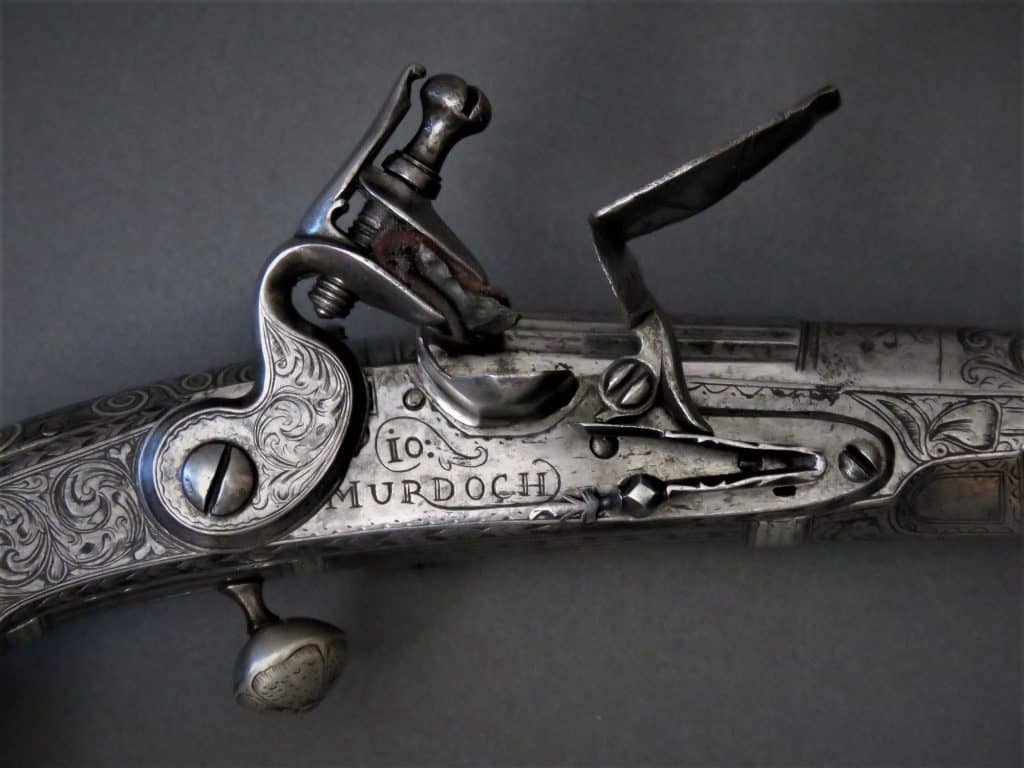 Underneath, the space is decorated with fine linear engraving of scrolls, parallel lines and waves, crossed by three bands of inlaid silver engraved with chevrons. The belt hooks are attached to each stock with an engraved double roundel pierced in similar manner to the guards of the finest traditionally made Scottish basket hilted swords. These slender hooks are engraved at the base and curl slightly outwards towards the ends. Each pistol is mounted with a slender steel ramrod with a pierced and engraved terminal. 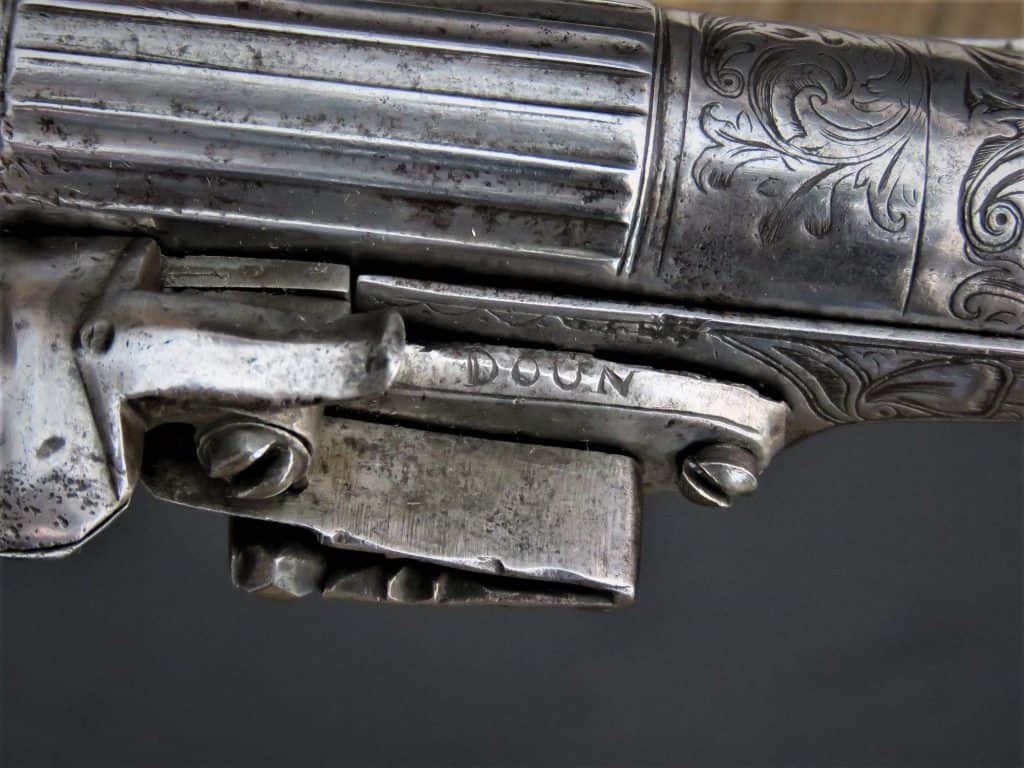 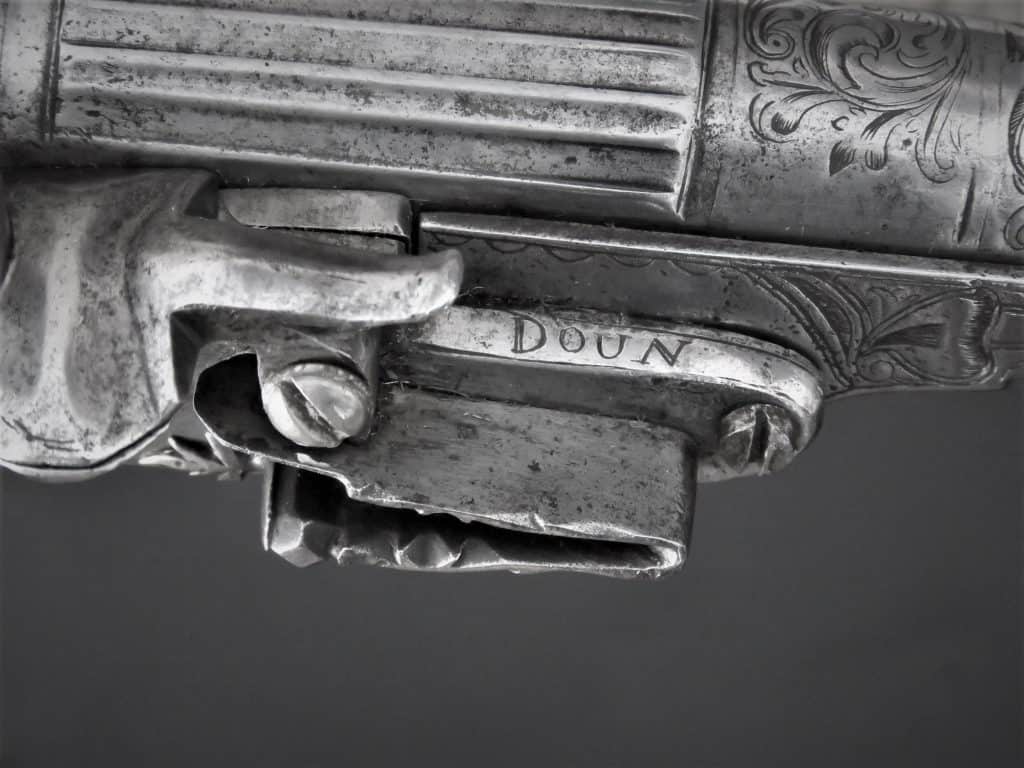 The border engraved flat bevelled locks are of typical “Highland” form with a horizontal sear extending through each lock plate which holds the cock in the half cock position, and a further vertical sear, the terminals of which are visible through a slot on top of each spine. Each lock plate is decorated with scrolling foliage on the tail, cocks en suite and the faceted steels are engraved with lines. The lock plates are each signed “IO:” with “MURDOCH” beneath, with a downward pointing scroll extension to the right hand leg of the letter “R” which curls to the right then upwards to turn  back around the letter “H”, in typical form for the signature of this maker. The letters “IO” are surrounded by a scroll. The name of the town of manufacture, “DOUN”, is inscribed on top of each lock plate leading edge in front of the steel.

The property of Lieutenant-General Hugh Percy, 2nd Duke of Northumberland (1742-1817, acceded 1786) and gifted by the Duke to a Mr Wood, factor of the ducal estates at Alnwick, Northumberland.

Thence by descent in the family line until sold at Christie’s, South Kensington, Antique Arms and Armour, 17 December, 2008, lot 197.

Prickers expertly replaced, some consistent light pitting and surface patination all over.

Reference a pistol in The National Museums of Scotland illustrated in James Arthur, “The Doune Pistol Makers Part 2 – The Murdochs”, Guns Review, Vol 16, No 5, May 1976, page 245.

There is some debate about whether these pistols actually belonged to Pitcairn. The crest on the escutcheon plates is not that of the Pitcairn family but of the Crosbie family. They may have belonged to a Captain William Crosbie, commander of the Grenadier Company of the 38th Foot, who was on the march to Concord with Smith’s column when the confrontation at Lexington occurred. He would have been with Pitcairn when the Marines and Grenadiers searched Concord for military stores. However, whether the pistols belonged to Pitcairn or not, such information does help confirm that the pistols were present at the battle in one way or another.

The Pitcairn pistols have been described as a “matched pair” which is highly unlikely. Pairs of pistols by John Murdoch were handmade and whilst they generally conform to an overall template of similar measurement and style, they also exhibit sufficient individuality to cause great difficulty in matching a pistol with one of a pair if its partner was lost. It is also pertinent that pairs of Doune pistols also often exhibit sufficient differences between them to a degree not present on regulation military pistols which may be misread as matching.